History About Fail of Spanish Armada

The Spanish armada started in 1588 and finished around a month later. The Spanish lost dramatically for several reasons. This essay will tell you why the Spanish failed so badly and why England won.

Don't use plagiarized sources. Get your custom essay on
“ History About Fail of Spanish Armada ”
Get custom paper
NEW! smart matching with writer

Medina was not as strong as drake and Howard because he had never commanded a navy at sea before. If the Spanish had maybe chosen an admiral that had commanded at sea before they might have had a greater chance of winning. Also the Spanish admiral suffered from sea sickness.

I think that this is a reason why the Spanish armada failed because I am sure he would have lost his concentration when planning attacks and formations. Medina chose to put his ships in the formation of a crescent.

This wasn’t a good choice because it would have been harder for the ships to move and react to the English ships however though it would have given them great protection. Drake and Howard however worked as a great team and both balanced each other out really well. They balanced each other out well because Howard wanted to move slowly and wouldn’t attach until he was sure he would win against the Spanish whereas drake wanted to attach as soon as he could.

Tactics of the English

Overall I think that the English had much better tactics than the Spanish. Firstly the English decided that they didn’t want to fight at a close range they wanted to fight far away with the guns on their ships. They ‘snapped at the heels of the Spanish fleet and wore it down.’ Another reason why I think the Spanish armada failed is because they weren’t as used to the choppy English Channel as the English sailors. This was a good advantage to the English navy because not as many ships would have crashed as the Spanish. On the port of Calais drake damaged many Spanish ships and led them scattering. He did this by using explosive on the fire ships. The English also used all the time they had to put up with the Spanish attach. They did this by putting up signal beacons all along the south coast of England this warned off the armadas and set them back a little bit.

Flaws of the Spanish

The Spanish had many flaws which helped them fail the Spanish armada. One of them was when the Spanish fleet got to Calais they had to wait a long time because the Spanish army had not yet arrived if they had planned it a little bit better and had got there at the same time this would have caused them not to lose so much precious time. Another flaw was that when the Spanish fleet got scattered because drake had used explosive on the fire ship they were forced to sail around the British Isles just to arrive back home safely. Through all this time many of the Spanish ships got lost because of the bad storms. Many sailors also died because they didn’t have enough food or water. If the Spanish had put enough food and water on their ships then this might not have happened. Weapons and ships

History About Fail of Spanish Armada. (2016, Mar 25). Retrieved from https://studymoose.com/history-about-fail-of-spanish-armada-essay 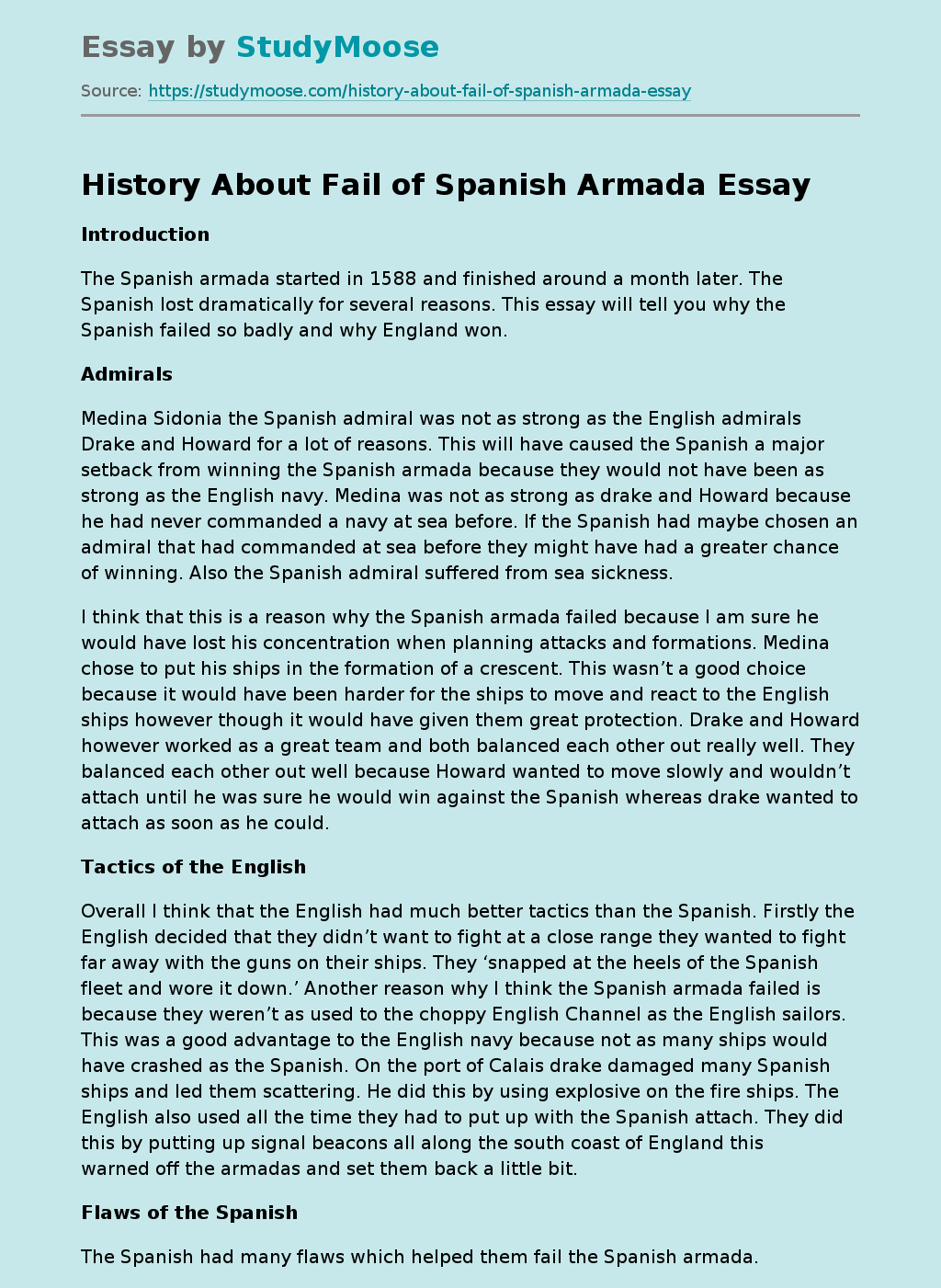