Importance of Informal and Formal Language

Don't use plagiarized sources. Get your custom essay on
“ Importance of Informal and Formal Language ”
Get custom paper
NEW! smart matching with writer

Situations in which formal language is the most appropriate form of address may have diminished, however it retains an important role in society.

From chatting on the phone to a friend to asking about a neighbour’s day, spoken informal language is the main form of language used in most people’s everyday lives, however it is now being used in more situations.

For example, a shift in the way businesses run has been reflected in a less formal method of communicating. Whereas the old business model was focused on the boss being above their employees, hence, a formal manner of communication between the two groups. Businesses now run on the basis of collaborating, sharing and creating a healthy and enjoyable work environment, so the method of communication is far more informal. Another example of a shift to informality is in the way people learn.

Teachers now speak in a far more informal style than they used to, instead of talking down to the students in a formal manner.

The internet also uses informal, humorous language, people now go to Youtube videos to learn The advantage of using more informal language in these situations is that it minimises social difference, is engaging and makes both parties in a conversation feel comfortable. Informal spoken language is a huge part of peoples lives, the personal way in which it is spoken is now being mimicked in informal writing.

Formal written language is one of the forms of language most declined in use, however the use of formal written language but still remains a requirement in many areas of communication. Formal language enables both individuals and corporations to convey their expertise and knowledge on a subject. Formal language is expected in academic essays, scientific research reports, legal documents and other more ‘serious’ occasions. For instance, compare a formal sentence such as “I believe working at KMart would allow me the opportunities to grow as an individual,’ with an informal one such as ‘I reckon working at Kmart’d make me a totes swaggier person’ for a job application. The first conveys experience, maturity and intelligence, and is in the style of language expected on the occasion, and as a result is far more likely to get the position. Formal written language may not be as widely used as it has been previously, however in certain situations it is the most appropriate, as is the case with formal spoken language.

While it is not the language the average person uses reguarly, formal spoken language has immense importance in both conveying knowledge and giving a sense of occasion. For a formal speech, given by a politician or other powerful figure, such as a debate, a press conference, ceremony, or other formal occasion, formal language is the most appropriate method of communication. This choice assures the audience of the speaker’s expertise on the subject and their competency in their position, which leads to trust what they say as being truth. Another occasion where formal language is prevalent is at ceremonies such as weddings, funerals and religious events such as Mass.

This formality, and adherence to the norms are key to creating a sense of occasion and meaning. For instance, wedding vows, or the Lord’s prayer. Each of these is highly formal and rehearsed, and an event would not have the same weight without them. Formal spoken language still has a place in society, giving meaning and weight behind individuals and situations.

A mixture of both formal and informal language are important for the continuance of society as it stands. Despite technological and societal changes, formal language remains key to conveying knowledge giving a sense of meaning and occasion to events. The two forms can coexist in separate spaces, in what linguist, Renato Beninatto, describes as the “underwear effect”. ‘Wearing a suit, people don’t mind using formal language […] The closer they get to intimate life—the closer they get to their underwear, that is—the more they want to use their mother tongue.’ So for the most part, in their homes, informality will be the language chosen by people, however for different occasions, be it a funeral or a job interview, people will accept formality. This goes to show that formality still has a place in today’s society.

Importance of Informal and Formal Language. (2016, Apr 23). Retrieved from http://studymoose.com/importance-of-informal-and-formal-language-essay 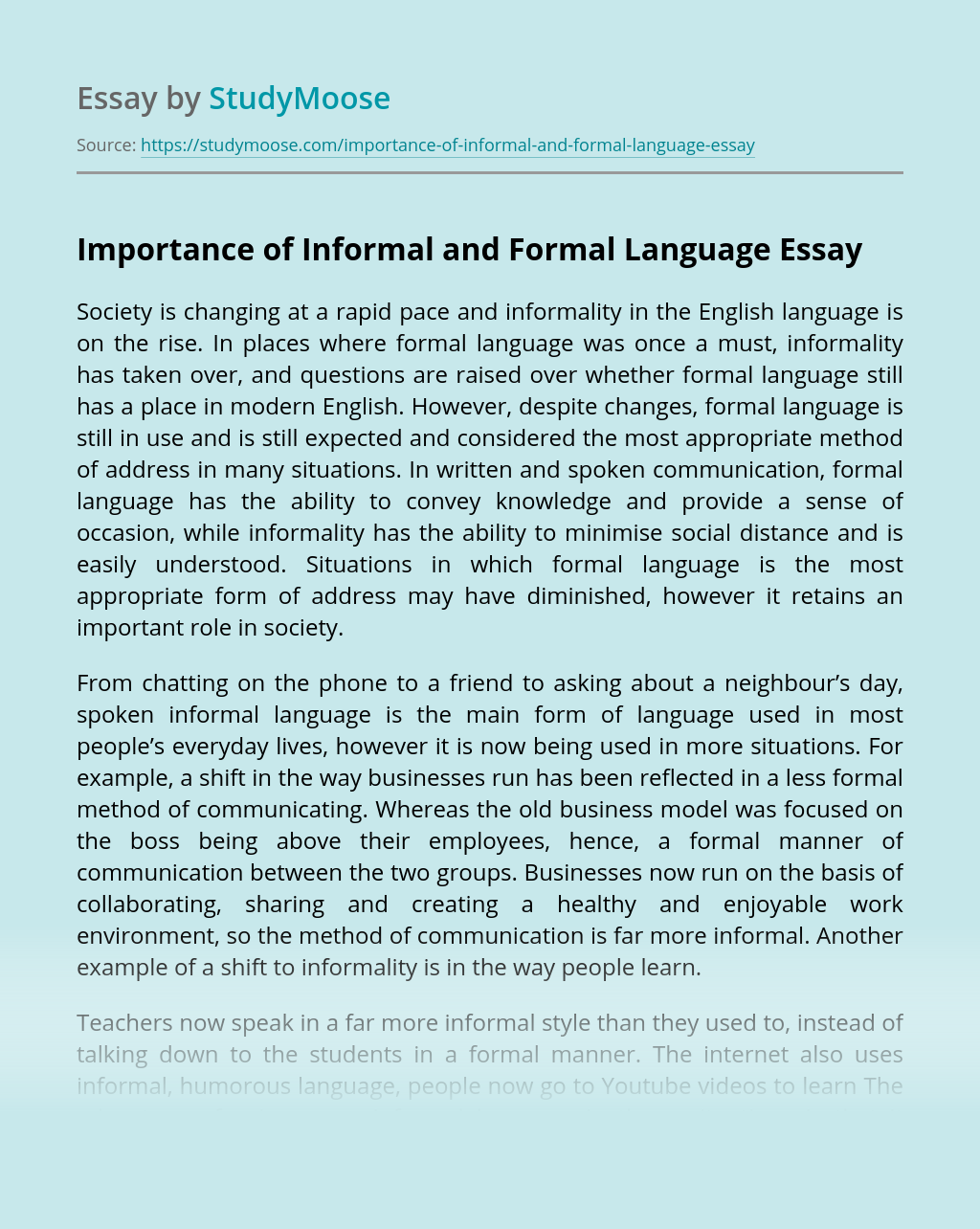