Many people may always say a picture is worth a thousand words; well the information held within the rage comics represents much more and exemplifies the perfect example of this saying. The Rage comic meme is about a series of comics that can be made by anyone using the common rages faces, which are also memes. These comics are web-based and usually describe real life scenarios from the rage comic creator. The first amateur Rage Comic originated in 2007 on an image board site named 4chan consisting of four panes.

The first comic starred the ffffuuuu guy, which is the first ever created rage face. The Rage Comics started to spread a few years after the first rage comic was created.

The rage comics gained its popularity on the internet forum Reddit. In January of 2009, a subreddit was launched by Reddit which became more popular than expected. This subredditt was widely known as f7u12 and was called “FFFFUUUUU”, the rage guy.

This rage guy represented serious disappointment, exasperation, or displeasure in any situation within a comic. The subreddit f7u12 allowed users of Reddit to create their own comics, which led to the creation of many other rage faces and characters in the rage comics. As the Rage Comics transformed, many characters became popular, while others didn’t. A few of the most popular rage faces is the Okay guy, the cereal guy, the forever alone guy, and the Y U NO guy.

When these faces are seen in a comic, most Rage Comic readers already know what the face stands for.

For example, the forever alone guy represents disappointment and loneliness in life and may be used in a comic where a person goes through a break up. The cultural reference in these Rage Comics is used to make fun of society resulting in humor. In normal life one person may do something and expect a certain response, well in the rage comics it is similar. The responses are displayed through the rage faces and rage characters. Usually at the end of a comic there is a punch line (rage face) that represents an emotion because of the situation that just occurred. One known cultural reference that the rage comics represent is the me gusta guy. This shows a cultural difference because you do not need to know Spanish to know what me gusta mean. This character is usually used in a situation responding to an awkward or disgusting event.

This meme in my opinion has made its own statement because it has certain words that are used in the comics that mean certain things. For example, in almost every comic there is going to be some form of derp or herp. In actuality derp is used to represent stupidity, but in the rage comics it is used as expression to represent unimportant dialogue, just as blah blah is used. Using derp or herp in the rage comics is also a form humor showing social indifference by not caring. The rage comics use a different language tied in with the cultural norms that we all understand to create humor. The original context of the meme, Rage Comics was to humor others with your ridiculous stories that may or may not have happened to you. In some cases the rage comics’ mutations fit well into new context, and then on the other hand some are taking way out of proportion. For example, there are quite a few rage faces and when making rage comics you are expected to use the correct rage face or character that will fit your scenario.

Also people have taken it out of hand because when you think of a comic you think of something simple with few words. Some people don’t grasp the concept of the rage comics so when the comics are sometimes mutated it’s been for the worse and not for the better. The comics that are mutated for the better represent great new context because the more rage faces the better you can describe your scenario in a comic with few words. To conclude, Rage comics are used to take serious moments and put them into a comic to make it not so serious and funny.

Rage Comics have came a long way, too long of a way that it is losing its social meaning. When the Rage Comics first started to spread and become popular is when it had its greatest cultural impact, although it still has an impact today. The Rage Comic has a great affect on all cultures because the different rage makers give people something to get into to express feeling in a different way. In the end from its origin, even though the punch lines at the end are called rage faces, they all are not meant to represent rage. It just kept its name from the first “ffffuuuu” guy.

You can pretty much find rage comics anywhere on the internet if you search Google, but here are a few sites that have them. 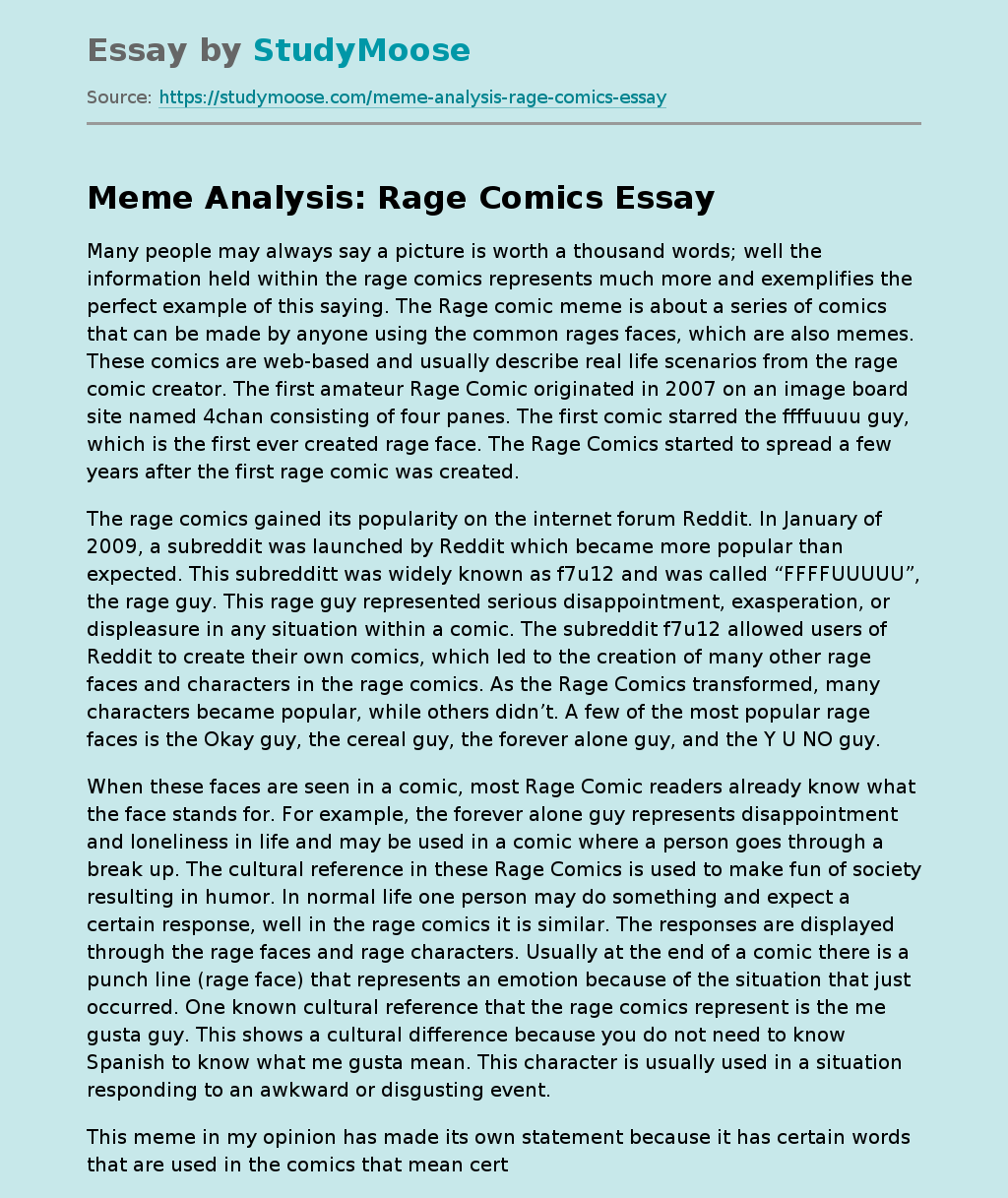