In this essay there are two arguments which both connect with how politics move the way comics are written and drawn towards to a certain crowd of Americans. Making the political stance evolve into comics policy. In the essay “How Liberalism Became Kryptonite for Superman” by Chuck Dixon and Paul Rivoche, they made a statement saying that as creators of superheroes they had to follow a certain critic in how they created their comics so that it can be friendly to societies policy.

Don't use plagiarized sources. Get your custom essay on
“ How Politics Ruin Comics ”
Get custom paper
NEW! smart matching with writer

The start of the uproar of Dixon’s and Rivoche’s statements created a political stance in how they viewed the comic world that forced them to a certain extent in how to make their creation of comics.

The words of the writers saying, “With the rise of moral relativism, “truth, justice and the American way” have lost their meaning (500).” Making both writers compare patriotism and morality into their argument, but what they don’t imply is that the evidence that they give in the essay takes both relationships as a given. For example, in the story they used as their initial example, “Superman renounces his citizenship so that his own political actions as an individual superhero are not seen as indicative of US policy (502).

” Which this could be mainly seen as responsible of Superman but in fact it’s frustrating on the part of Dixon and Rivoche words. They pointed out a valid point in which they could use by saying how Superman is like a murderous dictator for life in the Injustice comic but, ended making a whole new angle into their argument.

This gets me into another point in how Janelle Asselin is correct in how Dixon and Rivoche are wrong. Dixon and Rivoche’s angle of making their argument true is really confusing. For example, Superman and Batman did occasionally fight Nazi and Japanese agents, but that was more of a focus for their respective film serials (and the Fleischer Superman cartoon) than the actual comics. Which makes no sense in how the paragraphs in the essay spends its writing on the image of Superman and not on how patriotism and mortality can be affecting the comics in politics. The authors of the essay only show a given idea which they make as an argument that only is illustrated by their ideology of how the past comics have been made.

By getting to this we see how the two authors are giving misrepresentational facts in their edition. Dixon and Rivoche decline to mention the CCA because it reason were to only create a hearing that could position the comics that were harmful to children and caused juvenile delinquency. For instance, when it said “In the 1970s, our first years in the trade, nobody really altered the superhero formula. The CCA did change its code to allow for “sympathetic depiction of criminal behavior . . . [and] corruption among public officials” but only “as long as it is portrayed as exceptional and the culprit is punished (502).” Making an unusual statement.

This type of claim was not really giving enough information in how the Comic Code Authority was making the wrong decisions in how comic should be written as. Instead it only showed the amount of poor memory the two authors had to give to their argument.

Dixon and Rivoche go back to back to the alleged discrimination, but it still isn’t very convincing. It feels like they are making their own opinion. For example,” Is Superman not ultimate “illegal alien?”. He wasn’t born in the United States […] he didn’t enter the country with a state approve way (507)”. That may be true but both authors facts are very ignorant in the essay. They are making limitations in how patriotism in a country can make a disagreement with morality which cannot be true because the elimination of one or the other creates a limit in a society and the entertainments of the comic books. Discrimination in the comics may be seen as a lack of moral but it show character that can build up a worldwide comic that anyone can read and see how a superhero can be used as an illegal immigrants and still help others to create unity in a society.

Dixon and Rivoche spend much of this essay providing background but never really going further with it. Even though they may show an argument in their essay they do not show enough evidence to provide that their claim is true instead it is only providing givens. Making Asselin argument be righter because she provides enough valid points in her essay creating a comparison in how Dixon and Rivoche are wrong about how politics in comic ruin the story.

The reasons that society is like this is because they can both show patriotism and mortality in a comic while still being careful of certain words than can lead to disagreements in the audience of Americans. 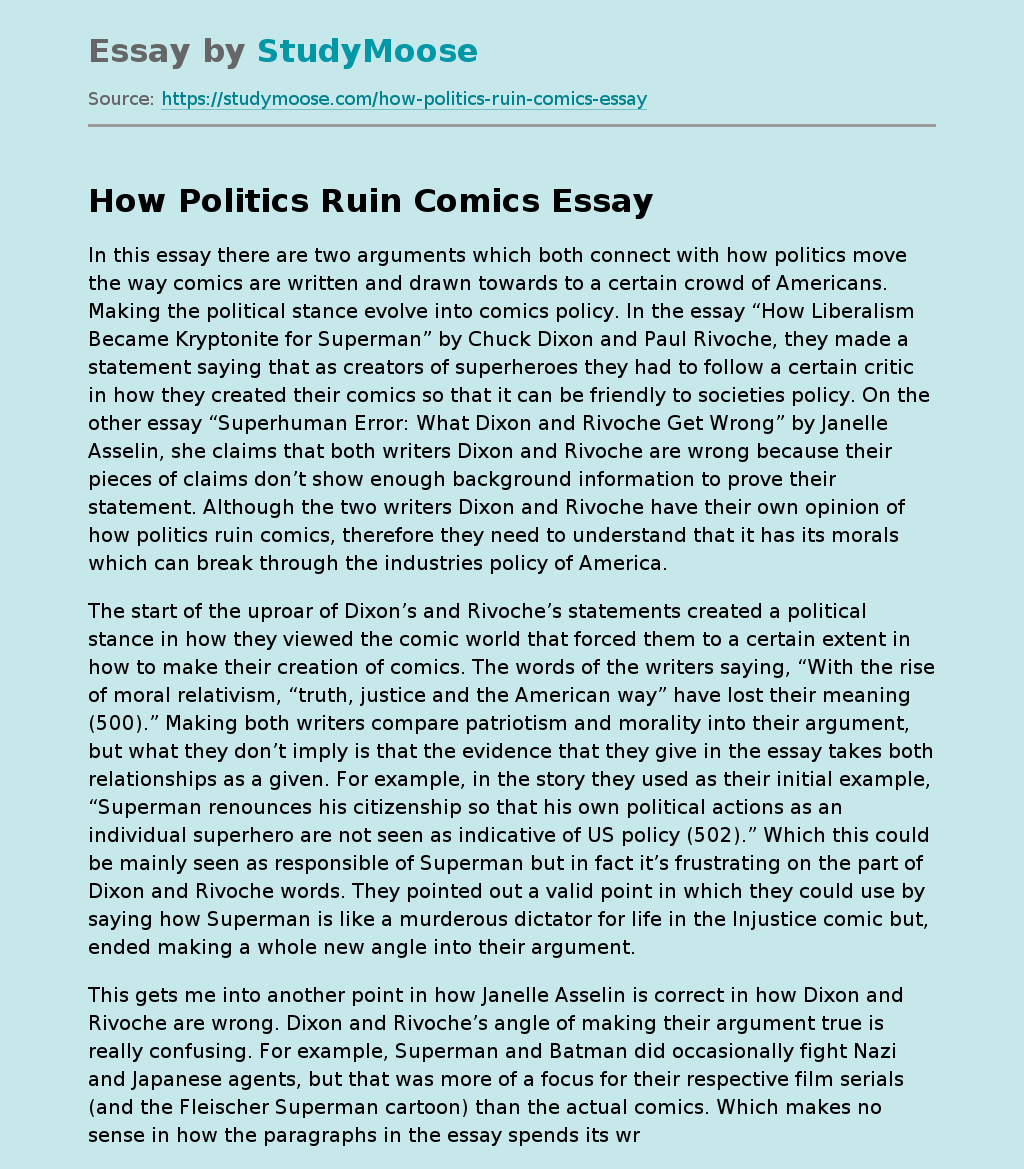