Imagine time traveling within the last few decades – even present day and asking a young boy who he looks up to the most, or who he wants to be when he grows up. Unsurprisingly, he would blurt out, “Spiderman,” “Iron Man,” or “The Incredible Hulk!” These superheroes are only a few of the thousands of inspirational characters Marvel Studios has created in the last 70 years. Marvel World Wide Inc. is a media and entertainment-based company with an emphasis on consumer products, gaming, and film production.

This company was founded in 1939 by Martin Goodman who initially called Marvel, Timely Comics (Wright). In the 1940’s not only did Timely Comics (now Marvel) create superhero fantasies they also expanded into a wider variety of stories, including horror, westerns, funny animals, mysterious crimes, war comics, jungle tales, romance, and even Bible and sport stories. This trend for genre expansion started to decline when the company noticed a huge consumer interest in their superheroes.

They started to focus on turning normal misfit people into super natural creatures. Giving hope and aspiration to children, they, too, can become “super.” Unlike rival comics that based their superheroes on perfection, glamour, and staying within national borders. Marvel’s stories dealt with political issues, diversifying their savior of choice, and educating their audiences.

When it comes to technology Marvel has expanded its horizons exponentially since its first comic books in the late 1930s. For Marvel, technology in the creation of films has been the trigger for their upward mobility of success.

From using flipbooks to bring movement into the characters we now have the innovation of Chroma Key Compositing (green screnes) to breathe life within our icons. With this revolution artist can now create the most elaborate worlds and unlimited high pace scenes. Thank goodness, or we wouldn’t have a planet after all the battles in today’s movies. Not only has Marvel made a complete turnaround on the way people view the clash of superheroes and villains through film they have globalized their characters through merchandise, games, and entertainment. A large expansion has recently been released at Hong Kong Disneyland announcing the addition of The Iron Man Experience in 2016. This Marvel themed ride will be the first of many to come into the parks. (Disney Parks Blog) Of course, in every superhero story there will always be a villain to face. In the corporate world, the villain company for Marvel is DC Comics owned by Time Warner, Inc. Time Warner Inc. is a multi-national media corporation headquartered in New York City. As of 2010, it is the largest media and entertainment conglomerate and it is second largest conglomerate as for revenue. Time Warner is compiled of Warner Communication Inc., Time Inc., and Turner Broadcasting System Inc. This corporation excels in film, television and publishing. Time Warner Inc. owns HBO, The CW Television Network, Warner Bros, CNN, Castle Rock Entertainment, DC Entertainment, etc. DC Comics is a publishing unit from DC Entertainment and does extremely well at operating the American comic book market share as well as relating media. It produces well known characters such as Superman, Batman, Wonder Woman, Green Lantern, Flash, Aquaman, Justice League, Teen Titans and some villains including the Joker, Catwoman, Lex Luthor, etc. The Walt Disney Company strives to excel in quite a variety of different segments. Of course, being a successful and global corporation, it generally comes with tough competition. It is the largest entertainment conglomerate as far as revenues (with Time Warner Inc. as a close second place). One of the five segments of The Walt Disney Company includes Studio Entertainment, which through Walt Disney Studios (formally known as The Disney Bros Cartoon Studios); the company does an excellent job by producing multiple award winning films throughout the decades. At the end of 2009, the Walt Disney Company purchased Marvel Entertainment for $4 billion. Both Walt Disney Studios and Marvel Studios are now working in conjunction for marketing and distributing matters. Marvel Studios produces characters such as Iron Man, The Incredible Hulk, Thor, Captain America, Fantastic Four, X-Man, Spiderman, etc. Now, if you aren’t a “comic book superhero geek”, then you’re perfectly okay! In certain ways, The Walt Disney Company and Time Warner Inc. are evidently similar. The Walt Disney Company focuses on 3 main priorities: technology, innovation, and global expansion. Time Warner Inc. also focuses on these same priorities as well, although portraying these qualities through a different aspect. Both technology and innovation are displayed through various levels and different types of creativity, from both of these competitive entertainment studios. For example, different plots make innovation opportunities for both types of super heroes. The DC Comic superhero villains don’t tend to kill…whereas, the Marvel Comics do. Marvel characters are usually pretty simple coming from simple backgrounds. The DC characters on the other hand, usually are more detailed with different super powers and more fantasy characteristics. Technology comes into play when Marvel Studio’s tend to use more graphic and uses light science fiction when creating their films. DC Studios tends to obtain a higher sci-fi storyline and image. At the moment, because Marvel Studios is a part of Disney, it makes it easier as far as global expansion goes. Currently, there is a new Marvel’s Iron Man attraction said to be opening in 2016 at Disneyland Hong Kong. It will be an addition to the Stark Expo, which is in Tomorrowland. Because the Disney and Marvel Studios collaboration is still quite new, this is mostly likely just the beginning of the Marvel Entertainment expansion. DC Comics on the other hand, has an annually comic book fan convention (Comic-Con). Each year, it is based in a different hosting city. In 2012, it was based in New Jersey and Comic-Con 2013, was hosted in Utah, in Salt Lake City. The next one (in 2014) will be held in California, San Diego. Sometimes there will be more than one event. Usually, there will be one within the United States and in past years, there was also a convention held in Canada and United Kingdom. As you can see, the 3 main priorities (technology, innovation, and global expansion) are lucidly very important to both Marvel Studios and DC Entertainment and their parent corporations (The Walt Disney Company and Time Warner Inc). Both competitors are changing the film and entertainment industry rapidly and it will be a mystery as to see what the future beholds. 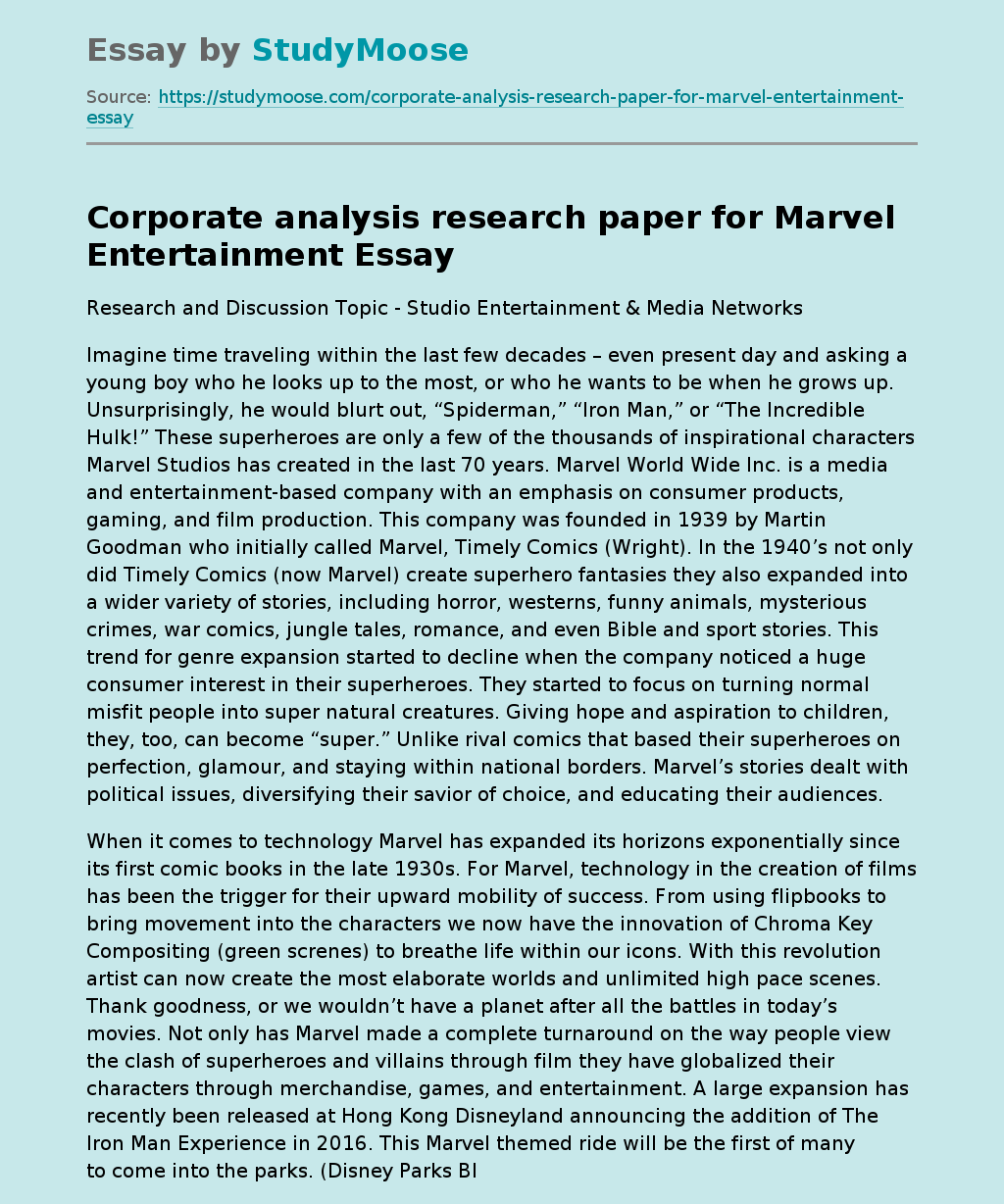