Many individuals attempt to establish a life of happiness and contentment by living in the endless “pursuit of happiness”; a pursuit that eventually could end up consuming them. Life is a series of choices, as you advance from one stage in life to another chances are they will be far-ranging and crucial. There is also a high probability that it will be a harsh and complicated journey that may take a lifetime of learning to get through. This journey will provoke mistakes, whether wanted or not.

Don't use plagiarized sources. Get your custom essay on
“ Save as Many as You Ruin by Simon Van Booy Short Story Analysis ”
Get custom paper
NEW! smart matching with writer

The short story “Save as Many as you Ruin” written by Simon Van Booy in 2007, highlights this exact idea, and the importance of learning from your mistakes. In “Save as Many as you Ruin” the main character Gerard comes across as a complex character who seems to have more lurking beneath the surface than it appears. On the outside he is a good-looking man, and although his age remains unknown, the text infers he is middle-aged.

Moreover, it appears that he is well educated and definitely not penniless as he refers to: poets, historical events, painting techniques, and is able to afford a nanny.

He lives in New York with his eight-year old daughter Lucy. Gerard is depicted as a very warm person with unconditional love for his daughter, “I love her, I’m her father, I want what’s best for her.” (P.3, l.107) The short story is told from a third person limited omniscient perspective and takes place in the snowy Manhattan. It contains eight flashbacks, but the actual story stretches over a single day.

It is written chronologically and starts off with Gerard making his way home from the office in a depressed state of mind. The author has allotted figurative language a big role in the establishment of the mood, “Yellow taxis are nodding through the snowy dusk. The lights from shop windows are beckoning”. Gerard is despondently wandering around in the snow all by himself, thinking of the footprints that are left behind. The footprints remind him of how soon everything will disappear and makes him question the insignificance of his life. It seems as if he reflects on his actions to learn from the mistakes that he had previously made. For instance the rabbi whom he offended by accident, “Walking up Fifth Avenue he cringes at the insensitivity of his comment. He must have thought I was like everyone else, thinks Gerard. Am I like everyone else, he thinks.” (P.1, l.23) Other than pointing out the regret from his actions, this particular quote also underlines the existential problems that Gerard suffers from.

Previously, Gerard had a short relationship to a woman named Laurel. He loved Laurel; in fact, she was the only woman that he had ever loved. The relationship was perfect despite the lack of desire in their sex life. This was where Lucy’s mother, Issy, came into the picture. Both Lucy and Gerard were shocked to the core when Issy got pregnant. The story indicates that Gerard had no intentions in ruining his relationship with Laurel, as he just wanted to fulfil his sexual desires. “He knew that other men enjoyed the occasional partner outside of long-term relationships, and he wanted to try it.” (P.4, 1.124) A few weeks later when Laurel acknowledged the situation she broke up with him by mail. Issy and Gerard lived together for six months, then one day Issy chose to leave everything behind in her strive to become an actress. Four years later she was found dead in a pool. She had presumably committed suicide, since she had written Gerard as her next of kin. Gerard lost the love of his life, and the mother to his baby. He is left alone with the burden and responsibilities of raising a child. If Gerard did not have an affair with Issy he would have, presumably, still be living with his beloved Laurel.

On the other hand, his unconditionally loved treasure, Lucy would not have been born. This is one of the most distinctive contrasts in the story. In addition to this, one could say that the most significant task in Gerard’s life doubtlessly is to protect Lucy, and herewith assure that she stays happy and unharmed. He is well aware that one cannot protect his or her child throughout his or her entire life by excluding all harsh experiences. As it stands on page one; “A few years later, children walked into gas ovens after a long journey from home. They were scared but loved their parents.” (P.1 l.16) This gives the perfect image of a child’s blind love for their parents. Even though you as a parent never would intend on hurting your child, it will be inevitable in some situations. The same concept goes for Gerard. He knows, that sooner or later he would have to tell Lucy the tragically fate of her mother, and how she chose to leave everything behind. The turning point of the short story occurs when Gerard spots Laurel through the falling snow. She is standing in line in a shop, looking more beautiful than ever. “In that moment of recognition he is not consumed by a rushing sensation of love – quite simply a door opens to a room that has never gone away. The years apart were just years without one another.” (P.2, l.63) This specific quote underlines the immense importance Laurel has to Gerard.

The reason why he was not consumed by a rushing sensation of love in the moment of recognition is quite simply that he had never stopped loving her. Subsequently to their reunion, they make love. All of a sudden it seems as if Laurel is able to cope with Gerard’s sexual desires; “Then he and Laurel make love first in the kitchen then in the bed. Her body is not as he remembers it. It is softer and somehow more pliable. Her toes seem perfect.” (P.4, l.152) This is a new beginning for Gerard, he and Laurel are reunited, and he has a prospect to make up for his mistakes – a second chance. In addition to the title: “Save as many as you ruin” – Gerard has inconsiderately treated people in his past wrong, and is trying to make up for it. In the end of the story, Gerard is standing at a crossroad watching the dark. He realizes that his yearning to have both Laurel and Lucy in his life is about to come true, when all of a sudden he has a sense that someone is following him. “All of a sudden he feels a chill like cold water down his back.” (P.5, l.198) This can be interpreted in many ways, one could say that he feels as if he is being followed, or may even haunted by guilt; Guilt toward Issy, who may have had other reasons to leave Gerard than becoming an actor. Issy acknowledged the nonreciprocal love, which imaginably could have been a branch in her suicide. One may interpret that the person following him is someone guiding him to make the right choices.

”Gerard feels as though he is being followed, that there are voices he can’t hear, that the footsteps of snow on the window are just that, and like Lucy’s conception – life is a string of guided and subtle explosions.” (P.5, l.203) Gerard faces many obstacles in his pursuit of happiness, and some are tougher than others. Eventually, after eight years of waiting, Gerard is awarded true happiness. He has regained hope, a new perspective on life and herewith what seems to be a brighter future. The short story underlines how every cloud has a silver-lining. Even though Gerard suffers from a great deal of misery, his suffer brings something good as well. In Gerard’s case, he receives his beloved daughter, and the ability to correct and redefine his identity. Some would say that Gerard stumbling upon Laurel is a coincidence; others would say it is fate. However, when all is said and done the answers are unavailable.

Save as Many as You Ruin by Simon Van Booy Short Story Analysis. (2016, Apr 07). Retrieved from https://studymoose.com/save-as-many-as-you-ruin-by-simon-van-booy-short-story-analysis-essay 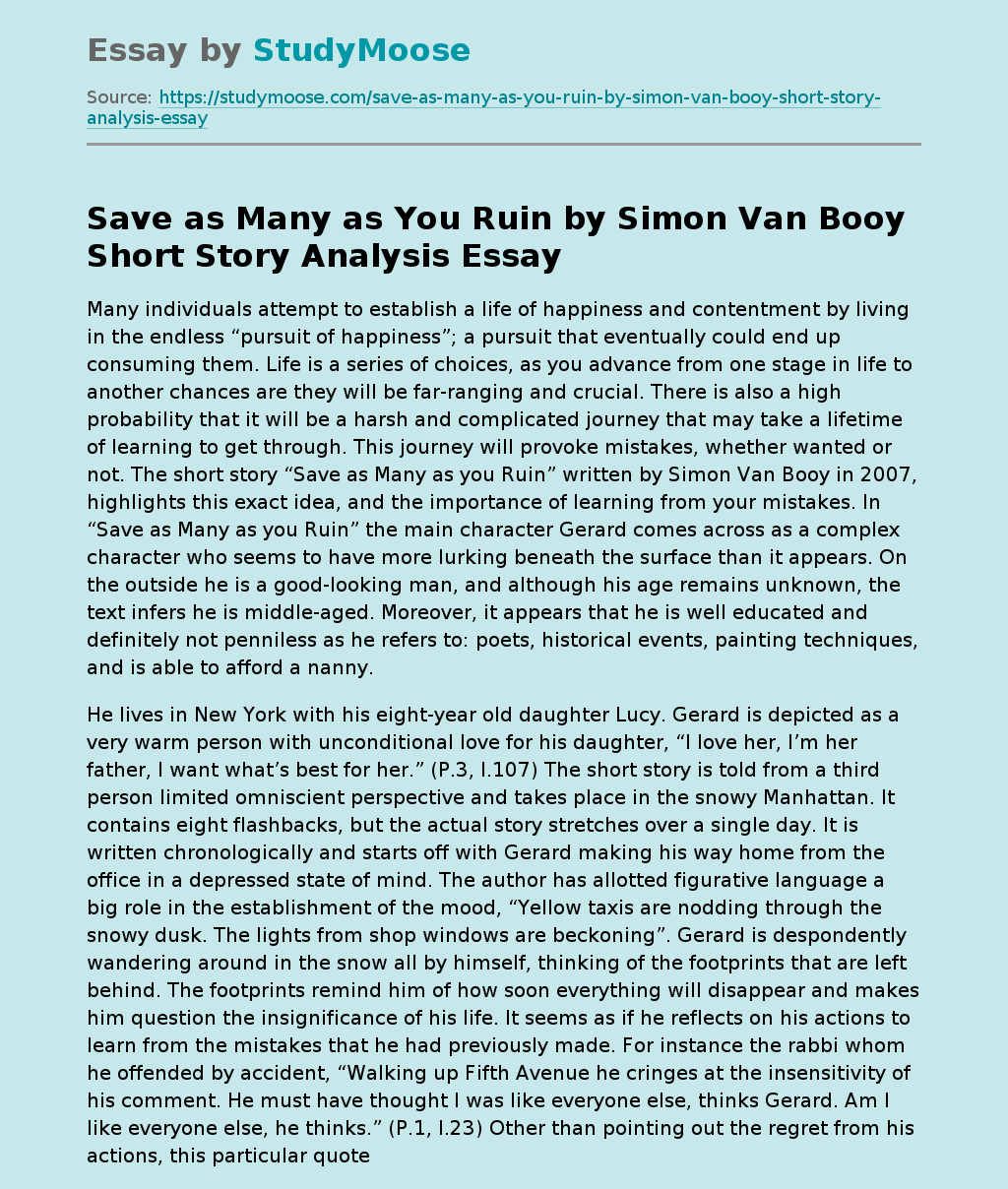