Image of Perfect Person in Lord of The Flies

In society, we have rules and regulations to keep the people that are a part of the society civilized. In the Novel Lord of The Flies by William Golding, Piggy is one of the main characters. Throughout the book, Piggy is discriminated for his differences. Piggy’s treatment on the island portrays how society as a whole is obsessed with personal appearance, divided, and praise driven.

The way Piggy is ridiculed on the island for his appearance represents how society values looks.

Don't use plagiarized sources. Get your custom essay on
“ Image of Perfect Person in Lord of The Flies ”
Get custom paper
NEW! smart matching with writer

Piggy’s physical features include, “He was shorter than the fair boy and very fat.” (Golding 4). Piggy also had very thick spectacles and was always neglected, teased, and left out of everything the other boys did. Just because Piggy was not as attractive or as physically fit as the rest of the boys, he is neglected, teased, and left out, and it is exactly how society treats kids like Piggy nowadays. Everyday, people try to change their appearances based on the social pressure of what society views as a “perfect” person.

Piggy’s treatment on the island portrays how bullying separates people of society today. In the novel, Piggy stirred. ‘I’ll come.’ Ralph turned to him. ‘You’re no good on a job like this.’ ‘All the same–‘ ‘We don’t want you,’ said Jack, flatly. ‘Three’s enough.’ (Golding 18). In government, society votes for their leader. Sometimes, people love the people who are elected into office and sometimes they do not.

When the majority of society is not pleased with election outcome they choose to go against it and even speak poorly of the candidate because they feel that the person is not good enough for the job, which makes the society very divided. Piggy could represent the unwanted authority and Ralph and Jack could represent society. They do not like what Piggy has to offer so they decide not to listen to him and do their own thing. Piggy’s contribution and leadership could’ve been very beneficial to their society, but they left him out because they didn’t like him.

Lastly, the anger the boys sometimes take out on Piggy could symbolize how as a society, when corrected, we act defensively and can’t take criticism . Golding states, “He took a step, and able at last to hit someone, stuck his fist into Piggy’s stomach.” (Golding 54). In this situation, Jack is trying to prove that he is the stronger leader, but Piggy points out the faults in Jack’s actions. Jack knew he was wrong but didn’t want to take it and own up to it, so he punched him. In today’s society, people find reassurance through recognition and praise, and when giving constructive criticism, people react defensively and take it the wrong way.

Piggy’s treatment on the island can help the reader understand society’s obsession with appearance, how divided society is, and how people live off praise and won’t own up to their mistakes. The book provides many examples that symbolize how our society functions as a whole. The way Piggy was mistreated throughout the book leading all the way up to his death shows how uncivilized people can become and how mean and cruel they can be.

Image of Perfect Person in Lord of The Flies. (2021, Oct 12). Retrieved from http://studymoose.com/image-of-perfect-person-in-lord-of-the-flies-essay 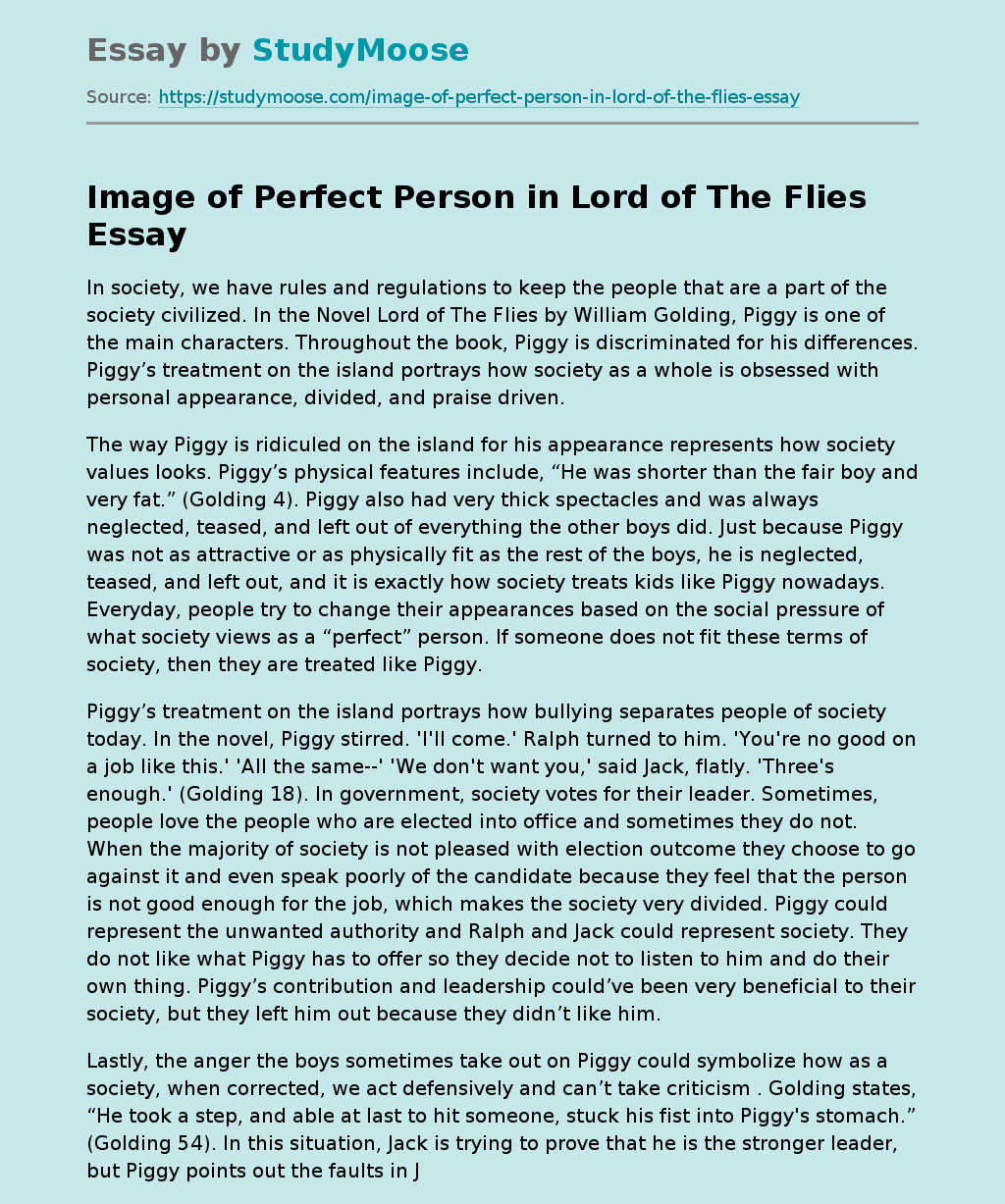