Literary Analysis Paper on Lord of the Flies

Struggling for Power
The novel Lord of the Flies can be a violent like story. All throughout the novel, William Golding does a good job of showing how Ralph and Jack quarrel between each other whether who should take charge and who will be the leader to keep things in order. William Golding uses the struggle for power to show the different sides of good and evil throughout the novel Lord of the Flies. The theme Struggle for Power plays a huge part between Ralph and Jack which causes them and the boys to act in savagely ways.

Don't use plagiarized sources. Get your custom essay on
“ Literary Analysis Paper on Lord of the Flies ”
Get custom paper
NEW! smart matching with writer

The constant battle for power leads to a debacle in their group on the island. Struggle for power in the beginning of Lord of the Flies is mainly between Jack and Ralph. Golding demonstrates this when Jack says “I ought to be chief because, I’m chapter chorister and head boy,” (14). This shows that Jack is determined to be the leader no matter what everyone else says and therefore showing his character as being very controlling.

As a result, the boys vote Ralph to be chief which makes him lead in a more reliable way. Now Ralph portrays a good example of a true leader. He demonstrates his brave and good leadership skills when he says “I’m chief. I’ll go. Don’t argue…You. Hide here. Wait for me” (114). This quote gives us a good example of the willingness Ralph is to protect his tribe and it also shows us the good leadership skills Ralph has.

Jack is very determined to steal the leadership from Ralph and continues to do so throughout the novel. A specific event showing this is when Jack says “He’s not a hunter. He’d never got us meat. He isn’t perfect and we don’t know anything about him.

See more: how to write an analysis paper on an article examples

He just gives orders and expects people to obey him for nothing” (140). This quote gives a good indication of how Ralph and Jack go back and forth. Jack and Ralph both want different things, which cause them to disagree almost on everything. Now Jack’s cravings for power leads to misfortunes in their group when Jack says “Who thinks Ralph oughtn’t to be chief, hands up, whoever wants Ralph not to be chief?”(140). This quote shows us that Jack is always in the constant need of power and how every chance he gets he is always trying to steal the power from Ralph. He gives us a good example of how demanding his character is and how he will not stop till he gets what he wants as chief. Jack gives a good example of using his demanding sense of power to try to gain control by continuing his battle with Ralph to gain power when Jack says “Listen all of you. Me and my hunters are living along the beach at the flat rock. We hunt and feast and have fun. If you want to join come and see us.

Perhaps we’ll let you join. Perhaps not” (140). In this situation when jack was turned down to be chief the first time he walks off making his own tribe therefore leaving the denouement of the group damaged. Jack believes that the way things are being run by Ralph are not the way things he would run them and he should be the chief. When Jack decides to leave the rest of the group and go on to make his own tribe and own rules, he soon later realizes he has no way of making a fire so he goes back to tell them they can come over to their side for a feast. He then leads an attack to steel Piggy’s glasses which becomes clear when Ralph confronts Jack about the specs. After they stole the specs we see the true meaning of the rejection of rules when Ralph says “Now Piggy can’t see, and they came, stealing…and stole our fire. They stole it. We’d have given them fire if they’d asked. But they stole it and the signal’s out and we can’t even be rescued…We’d have given them fire for themselves only they stole it” (168).

This quote gives us a good explanation of how the boys and their savagery and it also shows tells us that the need for power is no more because of Jack going his separate way with his own tribe. William Golding does a good job of not only giving you a in depth mental picture of what is going on between Jack and Ralph and their struggle for power but he also does a good job of giving a good picture of the novel as a whole.

Literary Analysis Paper on Lord of the Flies. (2016, Mar 17). Retrieved from http://studymoose.com/literary-analysis-paper-on-lord-of-the-flies-essay 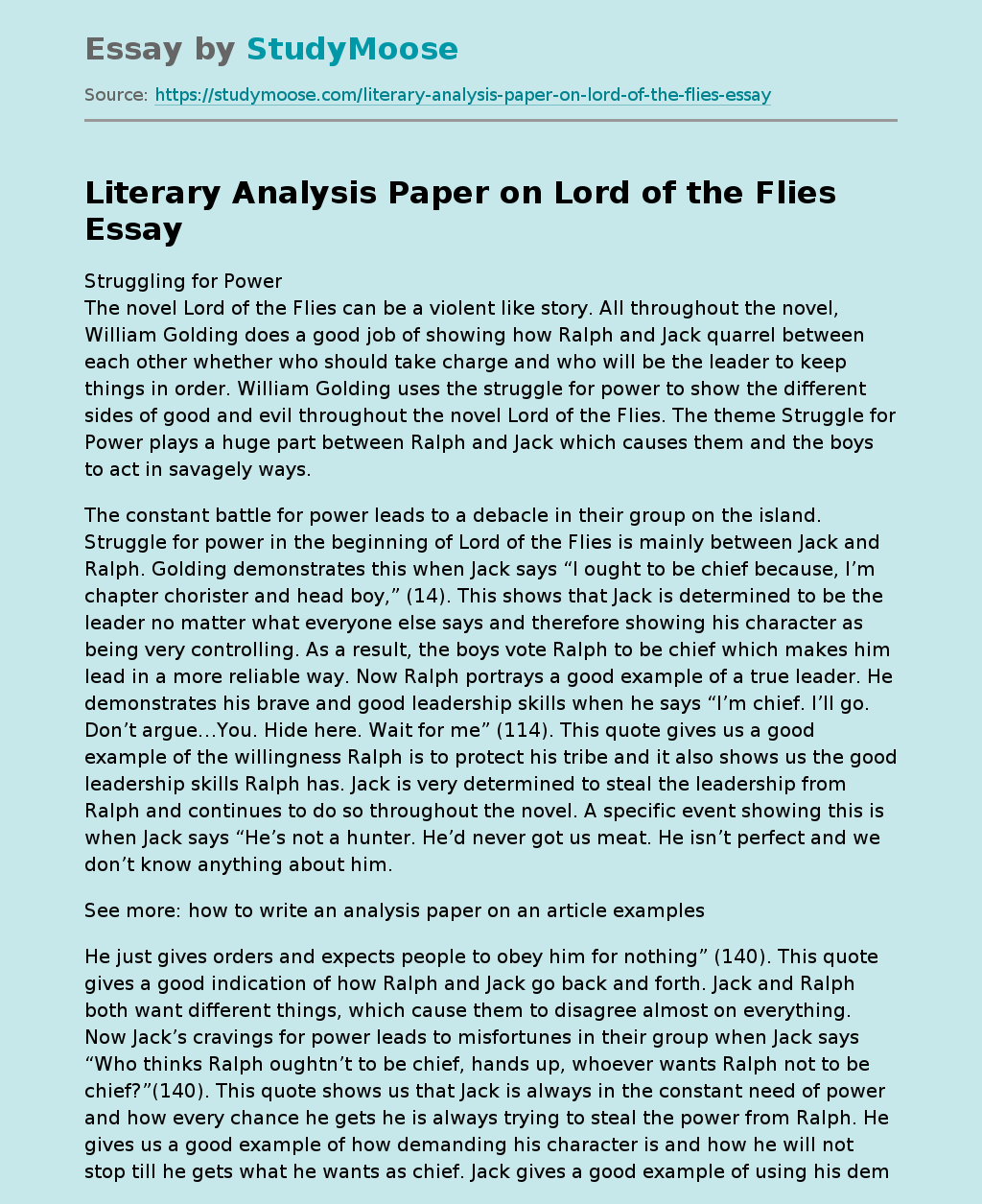