Examine the significance of the character Piggy in the novel “Lord of The Flies” consider his purpose, key role and relationship with the other boys at important points in the novel. To mimic men’s actions and lost of civility in times of war and need, William Golding, narrates a story in which all characters are boys, with the intention of taking the reader through the journey made by those who descend to savagery when facing certain conditions. This essay is going to explore and explain the symbolism behind one of the novel’s main characters and how his presence influences other characters’ actions and the way things turn out.

Get a verified writer to help you with Lord of the Flies – Character Analysis: Piggy

Piggy is a Short and heavyset boy who wears spectacles and is disadvantaged by asthma. At first he appears to be a desperate childish boy by panicking over the rest of the world’s lack of information regarding his and the boys’ whereabouts, – while the others see this as an opportunity to be free and independent – which makes him seem like a dependable, desperate young boy.

However, as the story unfolds we come to understand that his worrying at the beginning is related to his analytical way of thinking.

And even though the other boys put him down due to his physical appearance, we come to learn how necessary he is on the island as a source of intelligence and insight. Due to his unfortunate looks and his nickname, the boys on the island refuse on sympathizing with Piggy and collectively make fun of him, making him an outcast – “The boys were a circle of sympathy with Piggy outside”.

Bullied and brutalized by Jack, he maturely shields away the mocking and focuses on increasing their chances of being rescued and meanwhile living in an organized environment.

However, as soon as his intellectual side starts to show, and his critical thinking becomes a crucial part in assembling a new community, – “I expect we’ll want to know all their names,” said the fat boy, “and make a list. We ought to have a meeting. ” – he slowly begins being accepted. His clever ideas introduce important concepts to the rest of the boys. For example, the use of the conch: the power to speak and be heard given to whoever held it in hands. The way he thinks endears him especially to Ralph who starts to admire him.

“Piggy rubbed his glasses slowly and thought. When he understood how far Ralph had gone towards accepting him he flushed pinkly with pride. ”- Thankful for being accepted, Piggy shows loyalty and respect for Ralph. At a certain point, Ralph questions his leadership skills and compares himself to Piggy who stands up for him – “You said Ralph was chief and you don’t give him time to think. Then when he says something you rush off”. He protects Ralph and reminds the others that they all collectively chose him to be their leader.

Once again, Piggy shows he hasn’t lost his values and instincts. Although he might not entirely fit in with the others, he manages to get his point across with Ralph’s help. His ideas frequently lead to innovation and his way of thinking is what gets them by the first stages of civilized survival. He represents democracy by presenting his ideals to the others and hoping to come to a mutual agreement on the way of executing things; and clings onto civility throughout the whole novel, by pointing out whenever one of the other boys take a step away from civilization.

Underestimated by many at the beginning, Piggy’s role in the story carries a very important meaning and stands for great attributes found in men. The sensible understanding of reality shown by the character stands for the rational scientific side of civilization. His maturity differentiates him from the others – “With the martyred expression of a parent who has to keep up with the senseless ebullience of the children” – and becomes essential in avoiding savagery and barbaric behavior from the boys.

His character is related to a great part of the symbolism used by Golding and has a very important role in preventing the descent from civilization to savagery, however, he sadly he witnesses the turnover. Piggy’s glasses represent many different ideas. The initial importance of the specs is that they represent the ability to make fire, which they hoped would provide the rescue they needed. Piggy’s glasses also signify Piggy’s ability to see literally and figuratively. Without them, he is helpless and blind.

He is unable to serve as well as Ralph’s right-hand man and voice of logic. When Piggy is “blinded” it symbolizes the blindness of the Jack’s tribe to the evil to which they are succumbing. Piggy’s murder completes the boys’ lost of sight (figuratively speaking) and forces them into total darkness, which leads to the hunting of Ralph. When his glasses are broken and he tragically dies, so does what is left of order and civilization in the island. Of all the forms of symbolism present in the book, Piggy’s character carries a relation to many of them.

To being with, his nickname isn’t only related to his physical structure, but it also suggests vulnerability, like the pigs on the island that rapidly become Jack’s targets. Another important symbolic element related to Piggy is the conch he and Ralph found at the start of the novel. They used it to call the boys and assemble them. After the conch is crashed along with his body, the boys divide themselves representing the loss of the civilized instinct once present in each and every boy.

Piggy is significant in the novel not only because he is one of the main characters, but also because his purpose is directly related to the main theme of the story: civilization vs. savagery. Although he wasn’t able to make the concept of civilization permanent, he spends the whole novel trying to get his values across, and reminding the others of who they were and how they were expected to behave. His intelligence gives him the voice of sanity and reason.

Get a verified writer to help you with Lord of the Flies – Character Analysis: Piggy 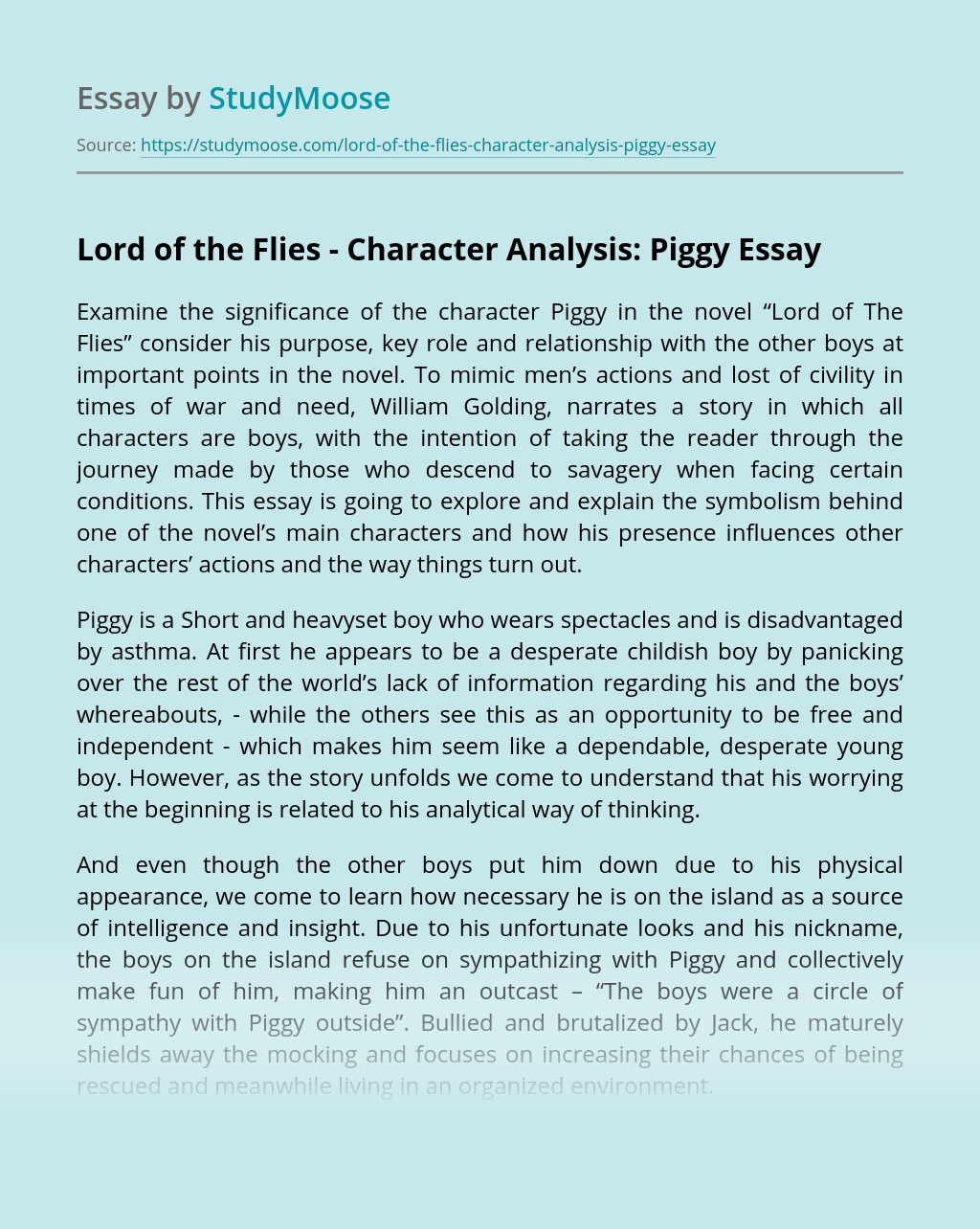 Lord of the Flies Ralph and Piggy's Glasses Symbolism

The novel, “Lord of the Flies”, deals immensely with characterization and symbolism. William Golding packed his story with a great deal of literary color, making it alive and vivid to the reader. Golding’s use of symbolism is obvious throughout the entire novel. The character that stood out the most in the novel was Ralph, who...

Lord of the Flies: Savagery vs Civilization

An innocent pig in a jungle nibbles on grass in the early morning. The pig squeals whilst his head snapped off with a boy as its last image it would ever witness. “He who makes a beast of himself gets rid of the pain of being a man” is a quote which widely relates to...

Get Essay
The Crucible: Reverend Hale

In Arthur Miller’s, The Crucible, when characters are faced with adversity, they are forced to show their true morals and beliefs. The character of Reverend Hale fights a battle between what ideasl have been engraved in his mind by books and society, and what he feels in his soul is truly right. In the end...

The Allegorical Character of the Novel Animal Farm

Medea's murder of her children

The image of Medea presented by Euripides in the exodos is undoubtedly largely horrifying and appalling to the audience. Medea manifestly presents her desire for revenge and it is difficult to sympathise with her character. However, in many respects her character fits the image of a tragic hero. Although, it is widely controversial to associate...

Comment on the effects of Dickens’ choice of language and form. Explain and discuss how these two sides of Scrooge reflect the society of the time and the treatment of the poor. In the book ‘A Christmas Carol’, by Charles Dickens, there is a stark contrast between Scrooge, the main character, in Stave 1 to...

Being hung because of someone else’s lies, selfishness, and lustful temptations, seems fair right? This is exactly what happened because of Abigail Williams. 19 people were hanged during the Salem Witch Trials, which was consequent of Abigail Williams lies, and selfishness. Abigail was the young women that John Proctor had an affair on his wife...