Lord of the flies character introduction

William Golding introduces character in the novel by giving us their personality at the very beginning. He shows us how each of them behave when first introduced rather than letting it show during the course of the novel. For example when we first meet Jack he is described as “the body was hidden by black cloaks which bore a long silver cross on the left breast. His cap badge was golden.” Another example is when Simon faints; Jack says “He’s always throwing a faint.

Don't use plagiarized sources. Get your custom essay on
“ Lord of the flies character introduction ”
Get custom paper
NEW! smart matching with writer

He did in Gib; and Addis; and at matins over the precentor.” This shows us that he is going to be the problem character in the novel because he is completely dressed in black and that he has no feelings for others than himself.

When we first meet Ralph he is introduced as a fair haired boy, about twelve years old and has the build of a boxer. He is caring, understanding commanding and mature. As the story progresses this develops further.

When they find the conch, Ralph is the one who blows it and gathers everybody together. This shows us that he is responsible and because he takes things seriously, very realistic and sensible. He is one of the few children on the island that doesn’t believe in the beastie and because of this he tries to calm everyone down by continuously saying there isn’t one.

Ralph is Jacks friend at the start but later on in the course of the story, when Jack says his true opinion on Ralph as chief, the argument and rivalry between them starts and Ralph begins to doubt civilisation.

He cannot believe that everyone follows Jack instead of him when he gives the ideas that would get them rescued whereas Jack just has fun. Ralph is truly the most charismatic of the group and shows this on many occasions when the fire burns out. Without Ralph, Piggy would have been killed long before he was because he is the one that keeps control. There is one example where we figure out something that we do not see at the start with Ralph. This occurs when they head up to castle rock to see if there is a beast. Ralph says, “Well I suppose I should go after all I am Chief”. This shows us that he is actually scared and frightened but has to be strong for the sake of the others.

Jack is one of the main characters and is introduced straight away. William Golding says that he is wearing a black cloak and gown with a silver cross on the left chest area. He has a black cap on but instead of it having silver crest on the front, his is golden. His hair is red and he has a skinny figure. This shows us that he is going to be the problem character because he stands out and is wearing complete black. We see that he is also demanding, short tempered and his followers are scared of him. This is shown when he orders the quire to stand still and they all wearily obey him. He is also strong, villainous, he only cares for himself and hates people lowering his self esteem. This is shown when Jack finally stands up to Ralph being chief and asks who would join him in another tribe. But because no-one raises their hand he storms off and threatens Ralph.

On the first hunting trip Jack is scared of killing a pig because of how inhumane it is. He doesn’t show this however by saying “next time I’ll get it”. However as the story progresses he becomes severely obsessed with hunting and it is all he does and thinks about. Jack doesn’t like getting the blame either. An example of this is when the fire burns out and a ship goes past. Ralph starts blaming Jack but then Jack quickly turns on Piggy saying “A fat lot you did”. This also shows how much Jack dislikes Piggy and how glad he is when Roger moves the boulder which kills Piggy.

As soon as we encounter Simon, he faints. This shows us how weak he is. Simon has black hair, a skinny posture and is one of Ralph’s aids. He is kind, caring, understanding and is the saint of the story. This is shown when he reaches for the fruit that the “littluns” can’t get at and gives it to them. Simon on the whole likes to keep himself to himself by getting away from the others. He goes on midnight strolls to think and clear his head. Simon is the only one that understands inner evil and completely disagrees in the existence of the beastie. He is killed when the group of savages (Jacks tribe) are dancing and mistake him for the beast. This is because the do not know what the beast looks like and because they are scared.

We do not see much of Rogers’s personality until later on in the novel. At the start we see him as a shy, quiet boy who is very peaceful. However later on in the story Roger develops into a troublesome child who has lost all sense of civilisation, he gets pleasure from torturing pigs and Piggy. He is pure evil. He is Jacks Piggy in the way he supports him and follows him, just as Piggy does with Ralph. We see this because every time Jack goes hunting the first one to go with him is Roger.

Sam and Eric are introduced as bat-like creatures who dance on the sand. They are then seen as twins who cannot do much without the other. We see this whenever they talk. They both interrupt each other finishing their sentences. In a way this shows how close the two of them are and how dependant they are on one another. They are caring as well. This is shown when they are forced to join Jacks tribe otherwise they would be hurt. When Ralph comes to see them they do not attack him or tell the others but give Ralph food. This displays how mature they have become where as at the start they were very child-like the way they could not look after the fire. It is Sam and Eric who start the rumours of the beasts’ appearance. They say it has claws and gigantic teeth but they don’t see what it actually looks like.

When we are introduced to Piggy he is a very incapable character who is fat and suffers from asthma. He has short hair, wears spectacles and has a button nose. He has been brought up very secluded and protected from the real world by his Aunt because of fears for his health and safety. We see this because he always says “My Auntie says I shouldn’t ……”. He is the wisest of the group because he also, like Simon, does not believe in the beast and tries to give a scientific explanation on why it does not exist. He is civilised the way he suggests calling meetings.

Jack intimidates him because he is annoying to the others. Piggy takes a lot of trouble from Jack until he breaks and tells Ralph that he wants to go and speak his mind. This is when he is killed by Roger which shows how scared they were of Piggy. This also displays Piggy’s maturity and how he is not scared to say his opinion. He learns he has to be strong and has to stand up to others to succeed in life but he does not get a chance to show what he has learnt.

Perhaps William Golding intended to provide us with the characters personality at the start to show how the story will progress and develop.

Lord of the flies character introduction. (2020, Jun 02). Retrieved from https://studymoose.com/lord-flies-character-introduction-new-essay 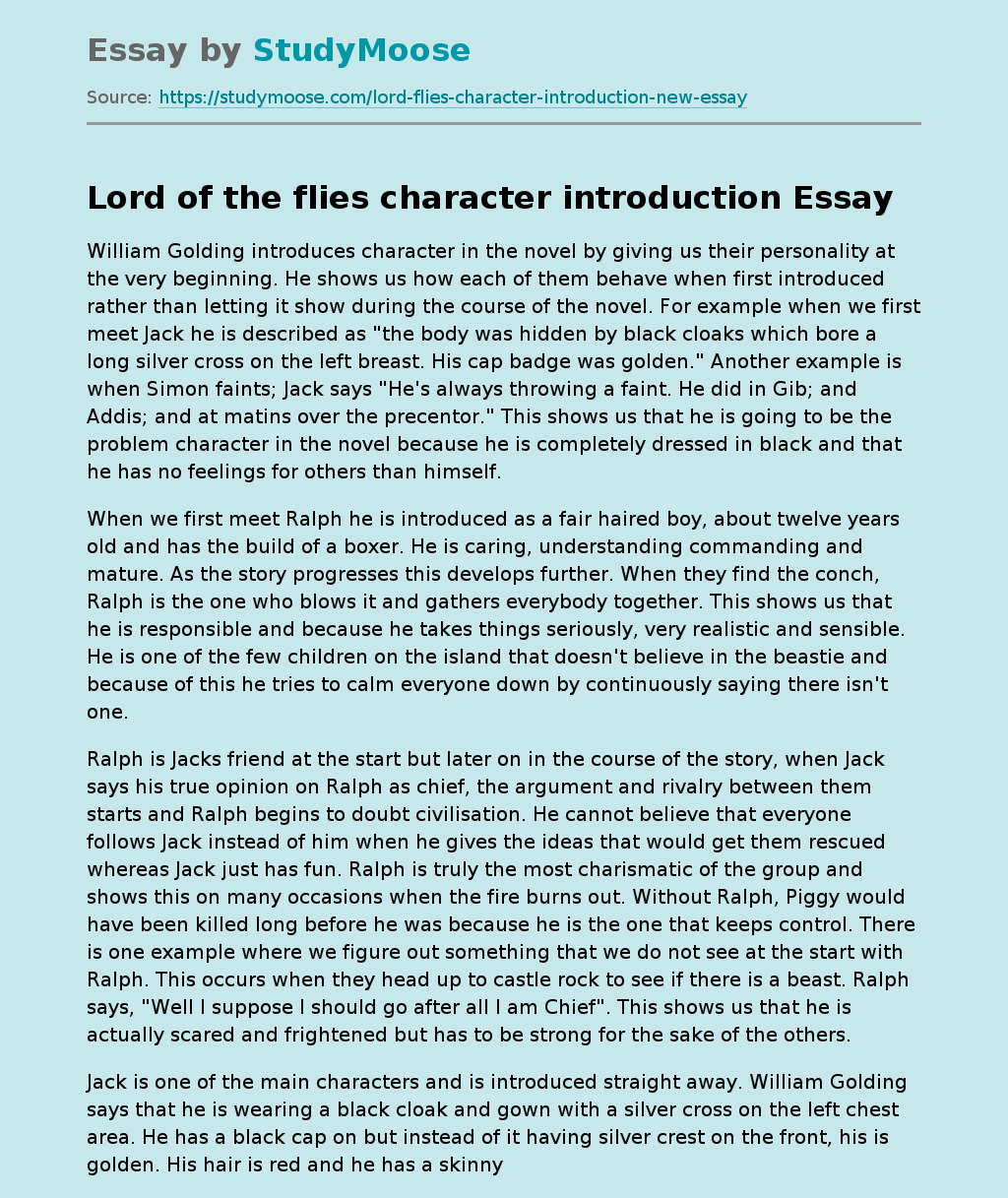