Jack Character Analysis in Lord of the Flies

In many ways Jack thinks he’s actions is always right. And he thinks he deserves to be in authority and he should have all the power instead of everyone else. Jack was independent when he went off on his own and made his own tribe. Jack is really good at impressing others at what he does and what he says. He thinks he is better than anyone else. Jack can be a really good leader, for example, providing for what his tribe needs.

Don't use plagiarized sources. Get your custom essay on
“ Jack Character Analysis in Lord of the Flies ”
Get custom paper
NEW! smart matching with writer

In some ways, Jack speaks his mind to Ralph and others. He can be mean to others especially Piggy but he thinks he is not a bully.

Jack thinks that he should be cheif instead of Ralph in the begginning of the story to the end. Jack also trys to turn Ralph group away from him by telling them lies about Ralph. He says “He’s like Piggy. He says things like Piggy. He isn’t a proper cheif.

(126 Golding). Jack purposely decides to take the couch from Ralph to to do so. This was right in front of Ralph and he’s own tribe Jack did this so everyone could here but what he said was not true about Ralph. He’s goes from trying to turn his group away from Ralph too trying to kill Ralph. “See? See That’s what you’ll get I mean’t that! There isn’t a tribe for you anymotr! The counch is gone. He ran foward, stooping. “I’m Cheif!(181 Golding) In this moment Jack was aguring with Ralph that has something to do with how Ralph runs his tribe and how Jack would like to run his tribe.

Jack did this out of anger but he failed the first attempt to kill Ralph the first time. Jack thinks he is a better cheif than Ralph is.

In the beginning of the story in chap 1 Ralph offers Jack to be in charge of the hunters. Jack interrupts Ralph during his meetings. Jack thinks he ideas are better. He also gains authority and power in the meetings he interrupts Ralph and everyone paying attention to him and not Ralph. Jack thinks he ideas are good one of the ideas is ” A fire! Make a fire! At once half the boys were on their feet Jack clamored among them the conch forgotten.”(38 Golding). In this part, Jack once interrupted Jack once again with his idea while Ralph was trying to talk to his group to listen and Jack interrupts and forgets about the conch rule. Jack has Ralph group follow him this says that Jack is already winning over Jack group by having Ralph group follow him like follow the leader. He getting more power than Ralph by taking control of his group.

In the beginning when Jack considered himself as a leader and authority. He becomes more and more powerful as the story continues. At the first meeting, Piggy and Ralph called Jack already tries to take control of the meeting by saying “I ought to be chief said Jack with simple arrogance”(22 Golding). This information is connected because maybe Ralph was in authority before they crashed the island. Jack in the that Ralph called for his group had an idea and thought it was going to be better than Ralphs he said “All the same you need an army for hunting. The reason why I think this is important information is it shows that Jack is taking over by saying his own ideas and it and it is not Jack group. Jack thinks he ideas are good one of the ideas is ” A fire! Make a fire! At once half the boys were on their feet Jack clamored among them the conch forgotten.”(38 Golding). In this part, Jack once interrupted Jack once again with his idea while Ralph was trying to talk to his group to listen and Jack interrupts and forgets about the conch rule. Jack has Ralph group follow him this says that Jack is already winning over Jack group by having Ralph group follow him like follow the leader. He getting more power than Ralph by taking control of his group.

In every Chapter from the beginning to the end, Jack thinks that he deserves to be respected by others. In the first meeting, they introduce names. “Kids names said Merridew “Why should I be Jack? I’m Merriew. Jack already trying to gain respect by using his last name. Instead of his first name. Being chief and making decisions makes Ralph feels respected.

In the story, Jack thinks piggy is the weaker than anyone else. And he’s picking on Piggy a lot. But he does not think that he is being and bully. In the beginning, he says “We don’t want you, said flatly. Three’s enough. (24 Golding) And Jack says this to Piggy because he does not want Piggy to come with Ralph and Simon. This is the beginning and Jack already sees Piggy as the weaker link. This information is important because Jack does not respect Piggy and it is already the beginning of the story. And all through the story, Jack treated Piggy bad but he does not see it as being mean. When the boys don’t know how to start the fire. “Jack point suddenly his specs- use them as burning glasses for the fire. Jack does not ask Piggy he justs grabs them with no respect for piggy he also did it by being aggressive towards piggy. Jack does not seem to treat Piggy the same way he does not treat Ralph. The reason why I think that is because in the begging Ralph offered Jack be in charge of the choir and earned his respect by doing that and Piggy has not offered Piggy anything like Ralph has.

In chapter 4 Jack becomes obsessed with hunting and it gives him power and he kills he first pig. And the action was “He began to dance and his laughter became a bloody thirsty snarling”(64 Golding). The reason why this is important because he gets enjoyment when he kills. Jack becomes obsessed with hunting to the point that he decides to hide behind a mask. And he is so focused on hunting that he forgets about the fire that would have everyone to be saved on the island. But he did not care about the fire than he did hunting. He has he hunters paint their faces and wear specific clothing as they hunted This is a quote when he decides to paint his face “Jack planned his new face. He made one cheek on eye-socket while, he rubbed over half his face and slashed a block bar of charcoal across from right ear to left jaw. He feels like a new person when he decides to paint his face and he becomes like a savage and begins to kills more pigs. This is important because he is hiding behind the mask as he killed the pig.

At the beginning of the novel, Jack is seeking out attention from others and thinks that he is in authority. Jack also feels powerful in the beginning because Ralph chooses him to be the leader of the choir boys. In chapters three and four, in these Jack is obsessed with hunting and that is the only thing he cares about, he also he paints his face and starts to turn into a different person and trying to impress the boys.

The thing that motivates Jack is having control of other people which means being the boss of people. Being that there are no grownups on the island to watch over the boys. The audience which whoever is watching because he seeks attention. Killing pigs since he loves to hunt. Ever since he has had the mask on to have him hide behind.

In human nature, the author is trying to say that there are order and power in the world and without that, some people are not civilized. That kids can’t take responsibility without breaking the rules. That all humans have a good side and an evil side. Without adults, kids, can’t survive on their own. Also without rules, our world would not be civilized.

Jack Character Analysis in Lord of the Flies. (2019, Dec 12). Retrieved from https://studymoose.com/jack-character-analysis-in-lord-of-the-flies-essay 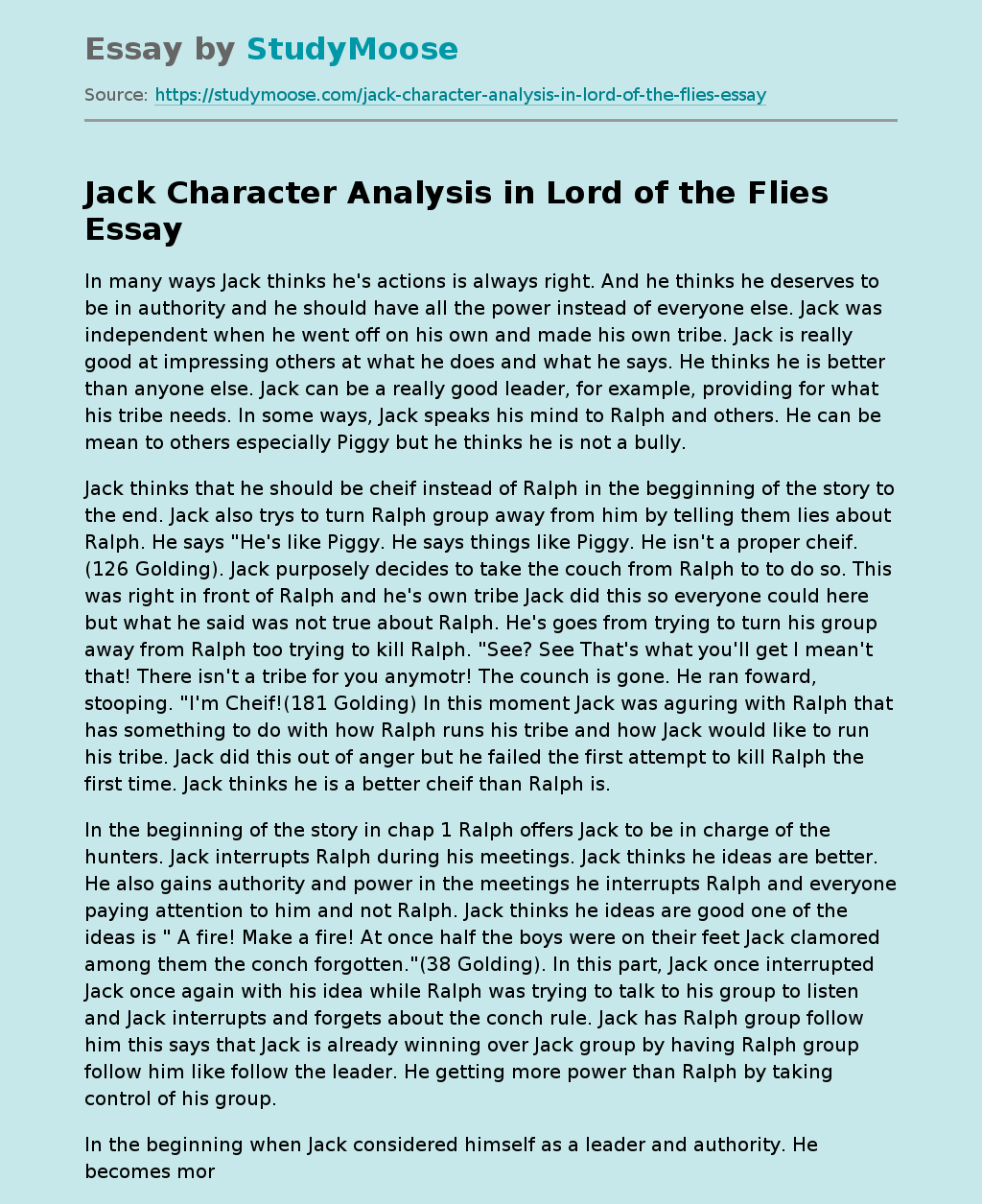