Image of Society in Lord of the Flies

Humanity often struggles to see eye to eye with one another, because oftentimes the eyes of humans are mirrors. In the Lord of the Flies by William Golding, British boys are stranded on an island with no adults. Golding indicates that certain characteristics lead to savagery. One of the main characters, Piggy is mentally abused by others on the island. Another character, Roger was killing for amusement. Another character named Jack only cares about hunting. The last main character, Ralph, is enjoying the island without realizing the actions he makes leads him into becoming a barbarian.

Don't use plagiarized sources. Get your custom essay on
“ Image of Society in Lord of the Flies ”
Get custom paper
NEW! smart matching with writer

All of these characters develop negative characteristics the longer they are on the island. In the novel Lord Of The Flies, William Golding portrays how disrespectful, arrogant and belligerent characteristics lead to savagery.

Human’s disrespectful qualities turn into savagery. Beasts abuse innocent people’s feeling causing them to perceive that they are worthless. At the beginning of the novel, Ralph and Piggy are introducing themselves to each other.

Piggy is expounding to Ralph how ‘“They used to call me ‘piggy.’” Ralph shrieked with laughter. He jumped up. “Piggy! Piggy!” (11). Piggy demands ralph specifically not to call him Piggy. Ralph neglects him and gets everyone on the island to call Piggy, Piggy. Ralph is apathetic which causes him to be impolite. Golding makes it elucidate that individuals are deceitful causing the development of savages. Also, uncivil comments that are communicated between others lead humans to barbarians. As Piggy strifes with name calling, he also bears with his asthma.

Ralph screams in Piggy’s face frequently by saying, ‘’Sucks to your ass-mar!’’ (13). Golding reveals how people are contempt. Ralph has a judgemental glare and a lack of affection leading him to an aggressive being. While Ralph is verbally abusing Piggy, Jack is being callous towards Piggy. Jacks shrieks “‘Shut up Fatty’” (21) in front of all the boys during one of their assemblies. When Jack screeches at piggy, it makes piggy feel useless. Jack’s inappropriate comment towards Piggy is his beginning stage of a savage. Golding deduces Ralph and Jack are being drawn to transforming into beats by their blunt remarks directed towards piggy.

Arrogance paves the way for humans to become savages. Equality doesn’t dwell in the minds of a wild beast. Towards the beginning of the novel, the boys were debating who their leader will be. No one votes for Jack, which guides Ralph into concluding the statement “I’m chief then” (23). Ralph presumes he is superior to everyone else on the island which guides him to a barbaric lifestyle. We battle with the thought of inequality and racism because of our ferocious characteristics. Later, Jack establishes his own tribe and announces “I’m going off by myself” (127). Civilization begins to disappear causing tension and bias thoughts to lurk on the island. Jack concludes that his tribe is at a higher level of an adventure than Ralph’s. This is because Jack hunts, kills and tortures. Jack’s independence of murder makes him a barbarian. Humans asses themselves as greater threats, which causes them to turn into philistines.

Belligerence is a key component into becoming a savage. Violence is a major logic in a barbarian’s mindset. In the novel, Roger is torturing a littlun named Henry. The author illustrates how “Roger stooped, picked up a stone, aimed, and threw it at Henry- threw it to miss” (62). Abusing and mistreating others direct a life towards savagery. Roger’s missing will evolve into harming. Golding depicts how in a savage’s perspective, violence entertains them. While Roger torments a littlun, Simon comes across the “beast.” He realizes it is a dead parachuter. When Simon went to go tell the other boys, the boys assume that Simon is the beast. Golding describes how “At once the crowd surged after it, poured down the rock, leapt on the beast, screamed, struck, bit, tore” (153). Jack incorporates everyone, including Ralph’s group into the killing of Simon. By jack bringing everyone on the island to participate in the killing of Simon, leads jack into becoming a complete barbarian. Golding foreshadows that violence comes from savagery. The boys advance hostile characteristics causing them to expand into wild beasts. As Simon’s corpse leaves the island, Golding portrays how“…Roger, with a sense of delirious abandonment, leaned all his weight on the lever” (180). The thought of innocence abandons Roger’s mentality, leading him to murder Piggy. His throwing to miss develops into killing on purpose. This is because his savagery unfolds by a greater amount. Golding analyzes how not only Roger but most of the boys, lack purity, which leads them into becoming beasts. Savages are rebellious, aggressive and violent.

The British boys cause a bitter society on the island. Golding has an adverse perspective on human nature. The most logical thinker on the island, Piggy turns into a savage. Roger went from the stage of adolescence to killing, as if he was a trained hunter. Jack portrayed his beastly characteristics from the beginning because his thoughts were only involved with hunting. He began with the killing of the pigs to the leader of the killing of Simon. Ralph became a savage without acknowledging it. At the end of the novel, he realized he is a barbarian and he regrets every decision he made on the island. William Golding reveals that evil is stronger than good. The novel exposes how disrespectful, arrogant and belligerent traits lead to the development of a savage. Beasts abuse society until all the positivity is gone. Our world will become ruled by savages.

Image of Society in Lord of the Flies. (2021, Oct 12). Retrieved from http://studymoose.com/image-of-society-in-lord-of-the-flies-essay 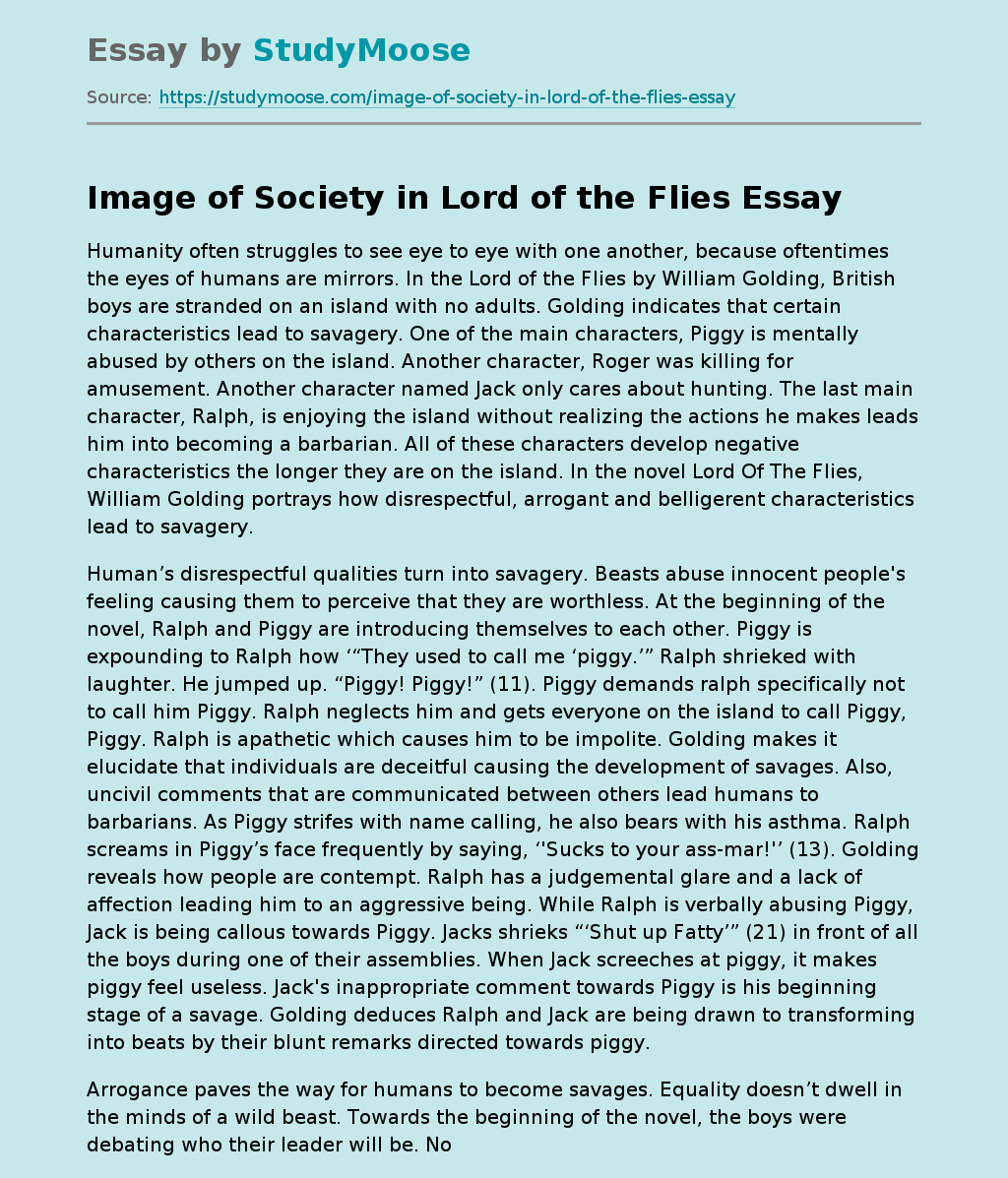