I and Thou by Martin Buber

Present essay participates in crucial examination of basic ideas, observations and ideas, produced by popular Jewish writer and thinker Martin Buber in his book ‘I and Thou’. Buber’s book is often pointed out as one of the significant impacts in Western philosophical literature of the 20th century. Specifically, the philosophy of dialogue, promoted by Buber resonated with and affected comparable contribution of such theorists and critiques, as Levinas, Bakthtine, existentialist philosopher (Sartre) and others.

Based upon the analysis of Buber’s concepts and their general philosophical context of the time, present essay defends the thesis that Buber’s viewpoint should be considered as a utopian project, characterized by the idealist vision of human society and nature and inability to find solution to genuine social contradictions.

Don't use plagiarized sources. Get your custom essay on
“ I and Thou by Martin Buber ”
Get custom paper
NEW! smart matching with writer

I and Thou In his analysis of ‘I’ in modern world Buber concentrates on traditional custom of the viewpoint of awareness, originated from Descartes and Kant. In this tradition ‘I’ is comprehended as pure subject of self-governing reason and ethical actions.

The novelty of Buber’s contribution is that he tries to dialectically link private ‘I’ with Other (Thou). Unlike earlier efforts of Hegel and Husserl, Buber’s effort is defined by deep impacts of Judaism spiritual custom. Generally, Buber conceptualizes the binary opposition of I and Thou as the source of any human relationships in the genuine world. In contrast to ‘I’ relationship with ‘It’ (an item), ‘I’–‘Thou’ set is defined with crossway and exchange in between different consciousness, both individual (human) and goal (God).

God is referred to by Buber as Eternal Thou, one that constructs the firmest tie with ‘I’. ‘It’ – ‘It’ relationship is regarded by Buber as the relationship which may be measured by the quantity of the objects we have in our daily life (Buber, 34). This relationship is not intimate and conscious. In contrast, “I”-‘Thou” is a living relationship between people lasting as long as another person is present in physical proximity and consciousness. The presence of an individual near another individual automatically results in the exposition of ‘I’-‘Thou’ relationship even if it not perceived consciously.

Spiritual relationship between different subjects (‘I’ and ‘Thou’) is the basic law of human existence in general. Buber tries to interpret this law using hermeneutic method. He argues that even in language, saying ‘Thou’ implies addressing your words and feelings to a given person and hence, ‘Thou’ can not be detached from consciousness – it constitutes its distinct part. Using example of a tree, Buber shows that notwithstanding our perspective, a tree would always be an Object for us, because it lacks consciousness: “I can subdue its actual presence and form so sternly that I recognize it only as an expression of law. ” (Buber, 51).

Buber argues that I-Thou relationship can not be properly explained – it is best explicated by the concept of Love, reflected in God. God become ‘Thou’ when he is directly spoken too. According to Buber, God is present in every aspect of human consciousness including arts, culture and music. Therefore, I-Thou relationship finds its outmost realization in the link between God and an Individual. Critique of Buber’s ideas Notwithstanding positive role of Buber’s ideas in the formation of 20-th century existentialism and humanist philosophy of Dialogue, one should point to crucial drawbacks and deficiencies of Buber’s ideas and approach.

As it was noted in the introduction, it seems to us that Buber falls into the trap of idealism and utopianism in the explanation of real human relations. Moreover, his use of religious doctrine of Judaism in addressing real world relationships may also seem to modern researchers problematic. First of all, human relationships in Buber’s book are conceptualized through the prism of individual consciousness, an approach that was revolutionary in 18 and 19-th centuries, but significantly fell behind modern developments in social psychology, social and political sciences.

Buber treats human relations at the level of individual consciousness, however, it contradicts empirical facts, which argue that individual behavior is mediated and influenced by cultural codes, traditions, institutions, such as family, law, working organization, education etc. To say that human relationships may be reduced to abstract notions of ‘I’ and ‘Thou’ means avoiding difficult issues of social roles, positions other factors. To say it plainly, in Buber’s concept ‘I’ is an abstract notion – it is not a real, historical human being, but rather a certain philosophical concept.

Moreover, it seems problematic to argue that ‘I’ is pure in its will and thoughts. Psychoanalytic approach to human subjectivity vividly demonstrated that human consciousness is influenced by sub-conscious destructive forces, often unknown by an individual. There is no denying the importance of the fact, that Buber’s interpretation of ‘I’ –‘Thou’ relations as the concentration of love, attachment is also idealist in essence. Such interpretation fails to see national, class and gender contradiction, which divide different human beings.

Religious interpretation of God as ‘Eternal Thou’ also seems controversial from scientific point of view. Buber argues that God is present in every sphere of human life, including literature, music and culture. However, these are created by men and hence, no role of God in their formation is evident. Moreover, it seems problematic to argue that God as perceived in Judaic tradition is the expression of love and intimateness. As Old Testament suggests, God was rather a protector of eternal laws, who punished people for non-abidance, rather than was a center of universal love.

Notwithstanding these evident drawbacks and contradictions, one should point to crucial contribution of Buber’s book to Western philosophy. No matter how utopian and idealist, Buber’s philosophy proved to be particularly instrumental in the development of French existentialism and Russian school of literary critique. Buber’s perspective on world as an inter-subjective relationship found its further development in the philosophy of Sartre, Kamu and other French philosopher. Levinas used Buber’s philosophy of dialogue in the analysis oral speech and narrative language.

Paralleling this development, Russian literary critique Bakthtine used Buber’s ideas in his analysis of Dostoevsky’s protagonists through the prism of their dialogical relations at the level of consciousness. The last, but not the least, it should be mentioned, that Buber’s concepts were the paramount of humanist philosophy in the 20th century. Notwithstanding their idealist and utopian nature they served as regulative ideas of behavior for several generations of intellectuals, including such renowned as Erich Fromm and Herbert Marcuse.

To sum it up, Buber’s book “I and Thou’ provides modern researcher with new concepts and ideas, many of which seem controversial and paradoxical. Basic deficiencies found in Buber’s philosophy are linked with his utopianism and idealism and lack of attention to modern developments in social science, social psychology. The unnecessary reduction of human society to individual level makes it impossible to see a broader picture of inter-group relations and general social institutions role in human behavior. Notwithstanding these deficiencies, Buber’s book provides a source of interesting and thought-provocative reading. 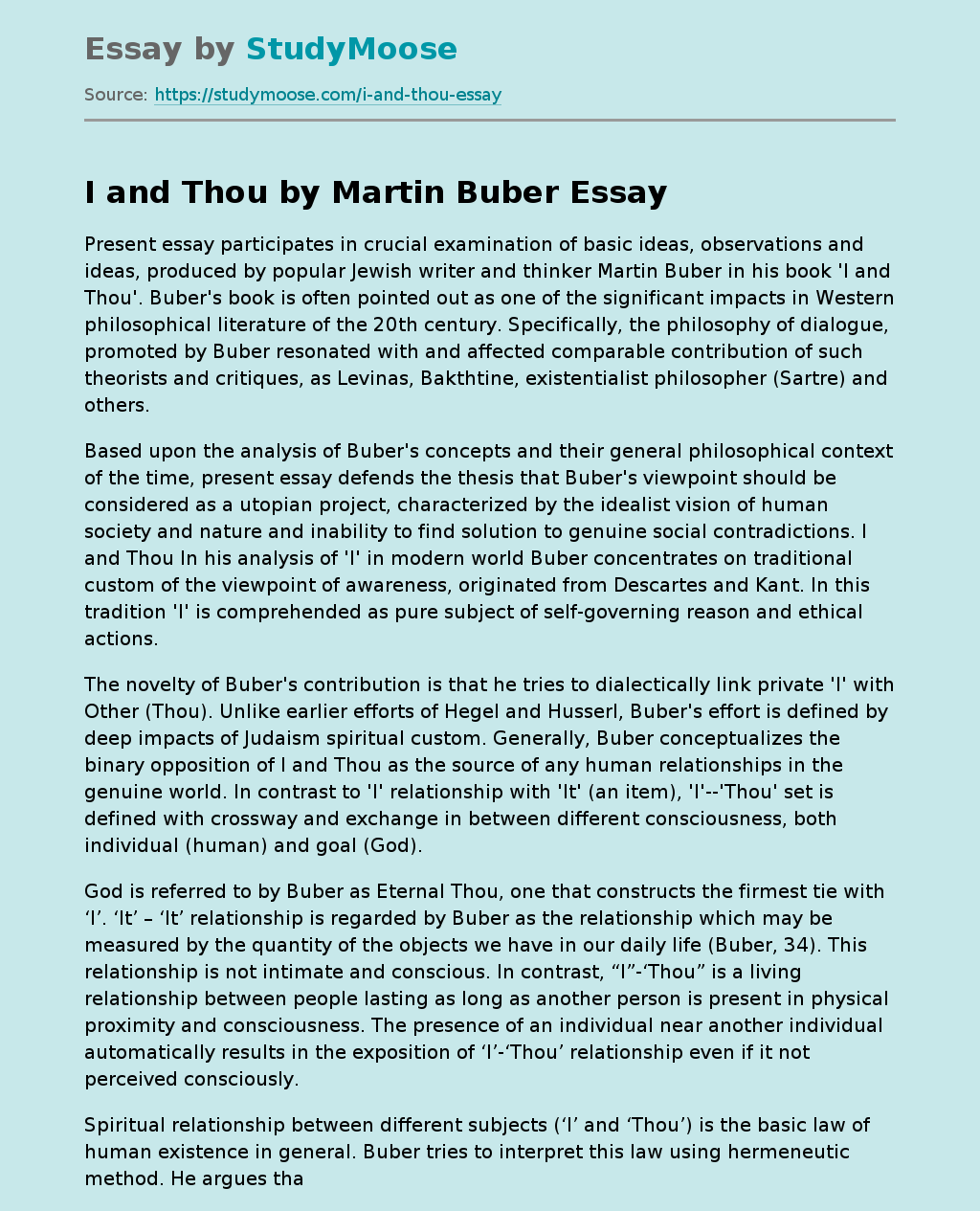