"o brother where art thou" odyssey

The Odyssey, is a legendary tale written by David Adams Leeming. This epic tells the story of a wise man named Odysseus who struggled to return back to his homeland, Ithaca, after the fall of Troy. In comparison to the text, the movie “O Brother Where Art Thou,” has a similar plot and is based on The Odyssey. In the movie, Ulysses Everett McGill is the main character played by George Clooney. Everett and Odysseus both encounter different struggles in their journeys throughout the movie and the book; however, both characters’ main goal was to be reunited with their families back home.

Turn in your highest-quality paper
Get a qualified writer to help you with
“ “o brother where art thou” odyssey ”
Get high-quality paper
NEW! AI matching with writer

The first and most obvious similarity between the movie and the text are the main character’s names. In “O Brother Where Art Thou,” Ulysses means Odysseus in Latin. Although one can tell that Ulysses and Odysseus are two different people from two different eras, their personalities show that they are based on the same character. For example, in the text, Odysseus encounters the infamous Cyclops during his journey back to Ithaca, and leads the Cyclops to believe that Odysseus’ name is “Nobody.

This shows that Odysseus is very clever, and heroic in leading his crew away from harm. In the movie, Ulysses also shows that he is clever. For example, he tricks Pete and Delmar his two cellmates that are chained to him by escaping from the Southern Work Farm, in order to seek the treasure that awaits them.

In reality, there was no treasure; all Ulysses really wanted was to return to his wife back home, misleading his two companions. Although, these two characters share similar characteristics, they contrast each other in the fact that they both come from two different worlds. Odysseus’ journey takes place in Ancient Greece, around the time of the Fall of Troy, whereas Ulysses lives in Mississippi, during the 1930’s Great Depression.

Through out the text, Odysseus’ character faces many obstacles and encounters many challenges. For instance the Cyclops, the Sirens, the Lotus Eaters, and when he finally reaches Ithaca he finds the Suitors whom are trying to compete for his wife. In comparison to Odysseus’ journey and the obstacles he overcame, Ulysses’ character also faces some of the same challenges: The one-eyed Bible salesman resembles the Greek version of the Cyclops, the Sirens who are the same in both the text and the movie, the KKK which act like the natives on the Lotus Eaters Island, and his divorced wife Penny and her new husband resemble the struggle Odysseus encountered with the suitors.

In contrast to these similar obstacles, we see that many of their challenges are handled differently. For example, both characters come across the Sirens, however, the actions that Odysseus takes are different then Ulysses. Intelligently, Odysseus and his crew stuffed their ears with bee’s wax in order to avoid temptation from the melodious sounds of the Sirens’ voices. On the other hand, Ulysses failed to reject the temptations of the Sirens, which led to the kidnapping of his friend Pete.

Throughout all these similar struggles both characters are still striving for the same goal, to someday return home to their families. One difference is that in The Odyssey, Odysseus’ wife, Penelope, longed for him to come home, and told everyone that one day her husband would return and take his place on the thrown once again. This was besides the fact that no one believed there was any chance that Odysseus would still be alive. On the other hand, in “O Brother Where Art Thou,” Ulysses’ wife, Penny, was embarrassed and ashamed to say that her husband had been arrested and put on the Southern Work Farm. Instead Penny told everyone that he was hit by freight train, and had died. Penny wanted to remarry to a man who was “bonafide,” unlike Penelope who dreaded the day that she was forced to remarry. Fortunately, both characters ended their vast journeys and were able to return home to their wives and children.

In conclusion, we find that Ulysses resembles the Greek version of Odysseus and in fact they are the same character playing the same roll, just in a different time period. This shows that stories and legends can live on and can be told and perceived throughout many different perspectives and cultures.

"o brother where art thou" odyssey. (2016, Jul 31). Retrieved from https://studymoose.com/the-odyssey-vs-the-movie-o-brother-where-art-thou-essay 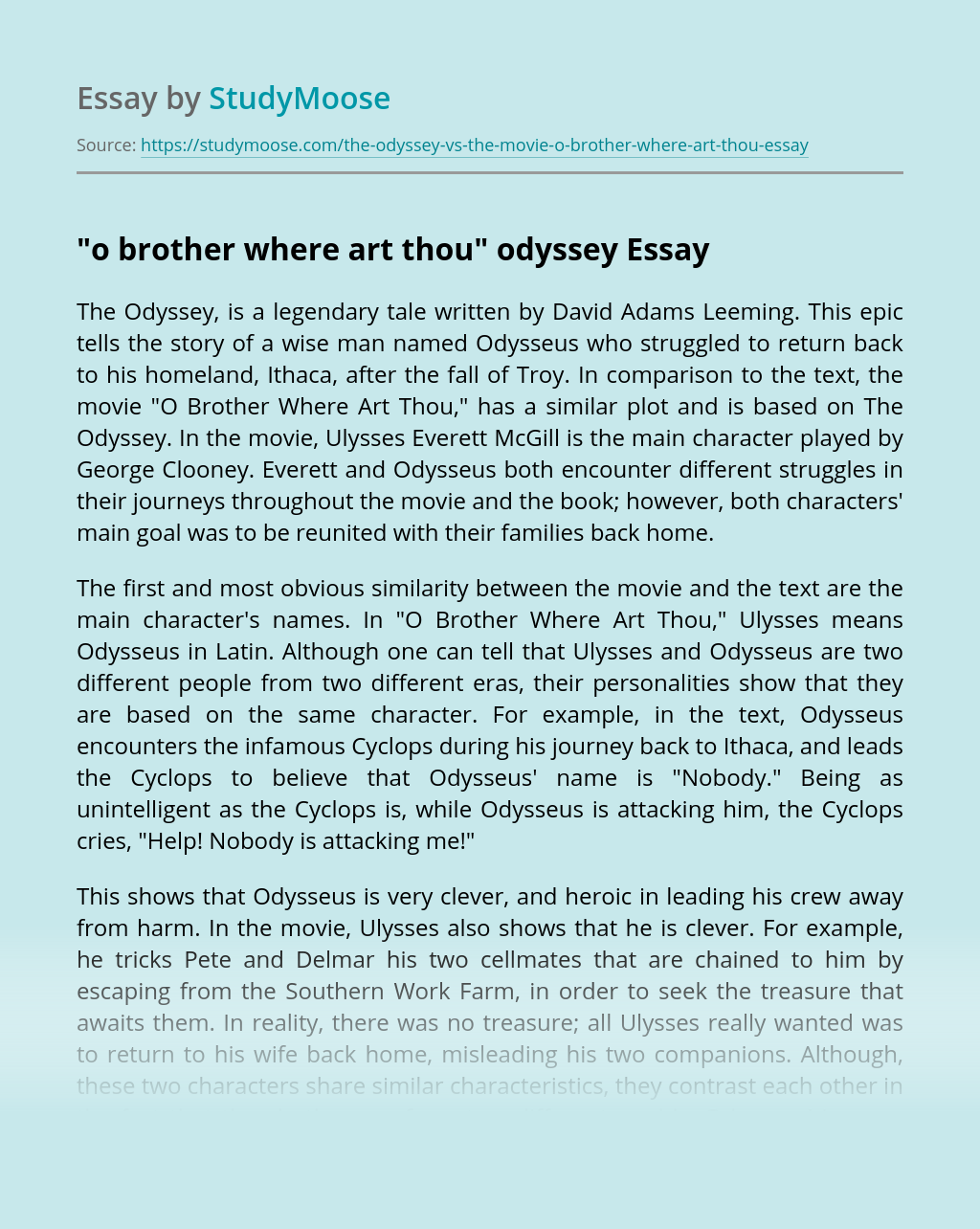 Turn in your highest-quality paper
Get a qualified writer to help you with
“ “o brother where art thou” odyssey ”
Get high-quality paper
Helping students since 2015
Stay Safe, Stay Original