What does it take to be an epic hero? To be an epic hero you are required to have five specific qualities. These consist of being human-like, being a confident and courageous solider, nobility, and being in a poem containing supernatural beings that has setting is vast in scope. In the poem the Odyssey, the main character fits the criteria. Odysseus is an epic hero.

An important trait to being an epic hero is that the character is involved in a poem complicated by supernatural beings.

To sail home in book 12, Odysseus has to navigate through the straits between two monsters, Scylla and Charybdis. As he is coming up on Scylla, he describes her:

Her legs-And there are twelve- are like great tentacles, unjointed, and upon her serpent necks are borne six heads like nightmares of ferocity, with triple serried rows of fangs and deep gullets of black death. (12. 46-51)

These lines prove that the creature Odysseus is facing is not a human being.

It shows that Scylla has 12 tentacles, six heads, and three rows of teeth. No human would have any these characteristics.

Not only does an epic hero have to be involved in a poem with supernatural characters, but a poem with a setting vast in scope that involves more than one nation. Odysseus tells the Phaeacians the tale of his wanderings in the beginning of book nine:

My home is on the peaked sea-mark of Ithica under Mount Neion’s wind-blown robe of leaves, in sight of other islands- Dulichium, same, wooded Zacynthus- Ithica being most lofty in that costal sea, and northwest, while the rest lie east and south.

(9. 10-15) Odysseus explains that he is from Ithica. He also explains that there are other nations around him. They are different than Ithica; like being “wooded” or “lofty.” This proves that he is part of a setting that includes a setting vast in scope.

Another important trait is that the character has to be of noble birth, high position, and legendary. Many people rely on Odysseus and trust him. He explains to the Phaeacians in book nine, before he begins his big adventure, “Men hold me/formidable for guile in peace and war:” (9. 8-9). He proves that he has confidence in his authority. He knows his power; how strong and relied on in society. This gives the Phaeacians an idea of how noble and legendary he is.

Despite being legendary, an epic hero is also the same as any ordinary man with longings, desires, and weaknesses. When Odysseus arrives at the land of the Cyclopes, his men advise him to snatch some of the food and leave, but to his and his crew’s detriment, he decides to stay, “Yet I refused. I wished/to see the caveman, what he had to offer-/no pretty sight, it turned out for my friends” (9. 130-132). Though he knew it wasn’t the right thing to do, Odysseus decided to stay. It is a very human-like characteristic to make mistakes. Humans do the things they want sometimes; even if they know it’s not the right thing to do. It shows he can be very much like a normal person at times and though he is trusted to always do the right things, he messes up too.

Although epic heroes have human-like features, they are trained warriors and perform courageous and super human deeds for the benefit of others. In book 12, Odysseus knows that the wrath of the monsters, Scylla and Charybdis, lie ahead. Not wanting his men to be afraid and cowardly when they see the monsters, he prepares a speech to prepare them:

‘Friends,
have we never been in danger before this?
More fearsome, is it now, than when the Cyclops
penned us in his cave? What power he had!
Did I not keep my nerve, and use my wits
to find a way out for us? (12. 143-147)

Odysseus proves how heroic he is. He is a strong and intelligent when it comes to dealing with danger. By saying this, he prepares his men not to be afraid and to trust him that everything will be okay, just like all the other times he’s gotten them out of troublesome situations. When they finally reach the monsters, his men don’t chicken out and go forth with what he told them to do. 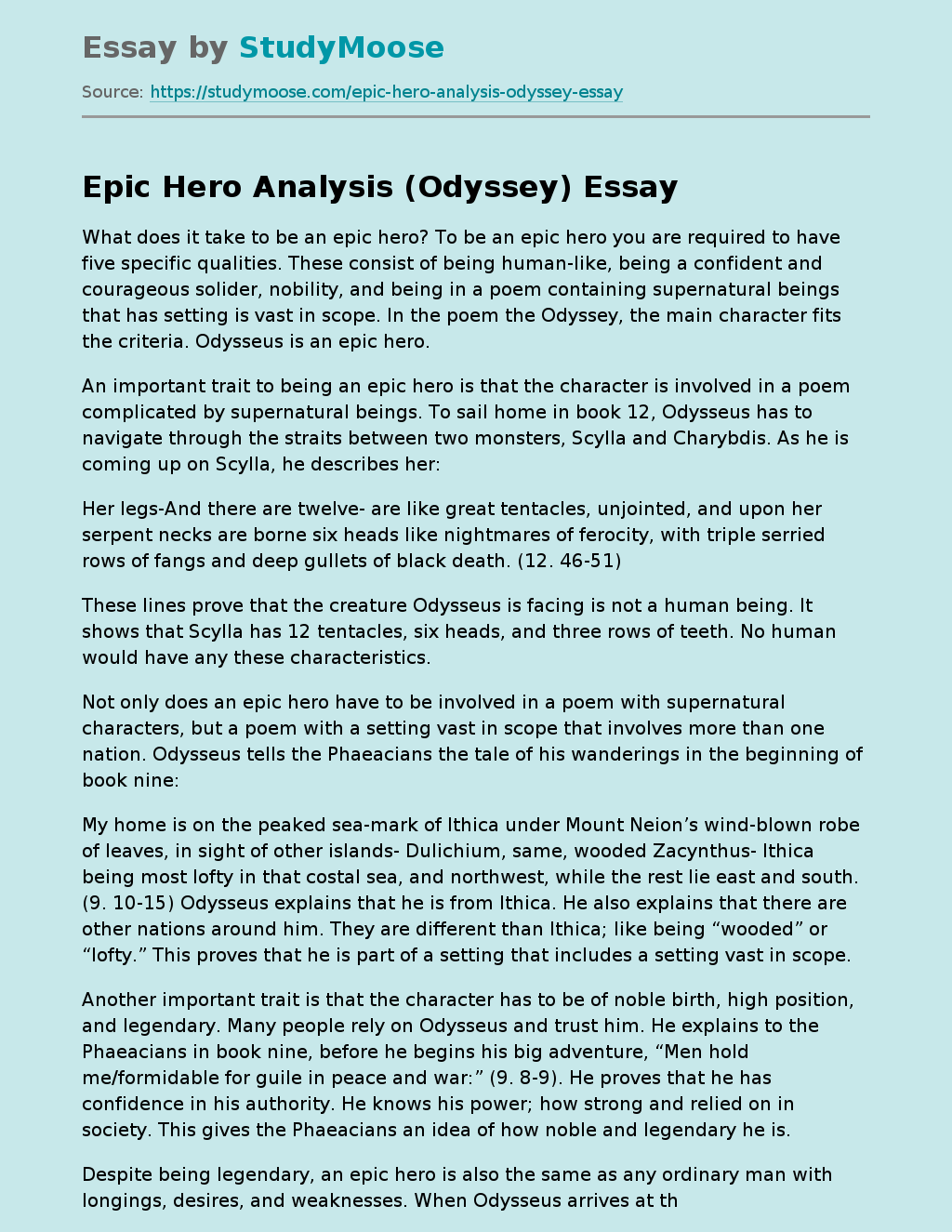