Analysis of The Aeneid and The Odyssey

When comparing “The Aeneid” to “The Odyssey”, it is impossible not to notice the similarity between Homer and Virgil’s poems. Both heroes leave Troy, granted one barely escapes and the other leaves victoriously, and both in one sense or the other are trying to reach their home, whether it is the old or future home. The adventures of the two heroes are incredibly similar on a number of accounts with the trip to the underworld being most intriguing.

First of all it is important to understand that Homer and Virgil wrote their poems for different reasons; Homer’s “The Odyssey” was written for entertainment purposes, while Virgil’s “The Aeneid” was written in order to subtly praise Augustus and promote the glory of Rome.

Don't use plagiarized sources. Get your custom essay on
“ Analysis of The Aeneid and The Odyssey ”
Get custom paper
NEW! smart matching with writer

This could in fact explain most of Virgil’s deviations from “The Odyssey”.

The two poems present us with very clear similarities; both heroes have to travel to the underworld in order to continue their voyage; both meet friends, foes and most importantly a parent.

Besides that, both Odysseus and Aeneas are guided by a god without whom they may have not been able to enter the underworld, and would definitely would not have been able to leave it. Even with these similarities however, the tasks of Odysseus and Aeneas are entirely different and the underworlds which they become acquainted with are also not explained in the same manner. Therefore, while the basic idea of the underworld seems to be the same for both poets, their description of Odysseus’s and Aeneas’s trips make these passages entirely different.

One of the most obvious comparisons of the poems is Aeneas and Odysseus’s meeting with old friends and family; both for example meet one of their parents. In this case, Odysseus may be sympathized with more for he did not know of his mother’s death and in the underworld had learnt that she died because of his absence and her longing for her son. Aeneas on the other hand does know that his father is no longer alive, but that does not stop both characters from crying when seeing their parent and both trying to embrace him/her three times. The gender of the dead parent also makes a point;

Aeneas’s dad could be referring to the all-knowing Caesar and the male dominance in Rome. Odysseus’s mother on the other hand, once again for the purpose of entertainment, could be representing Penelope, Ithaka and all the love Odysseus has for his home. Besides the meeting with their parent, both heroes are undermined through their treatment of the spirits. For example, both are captains and both have managed to miscount their sailors not noticing that one of their men has died.

This is crucial for Aeneas’s story for if he is the founder of Rome and cannot keep count of a handful of men, how is he to establish and control a new city? Besides that, another interesting point is Odysseus’s meeting with Ajax and Aeneas’s meeting with Dido. Here, the similarities are bewildering; both of these characters die because of the heroes, both of them die by thrusting a knife into their chest and both of them are still angry with Odysseus and Aeneas. As interesting as their actions may be, Odysseus and Aeneas both blame their actions on the gods, Aeneas more than Odysseus.

Once again this undermines the founder of Rome for he cannot take responsibility for what he has caused and expects the gods not only to help him get to Italy, but also to be able to blame his mistakes on them.

Even the reason for Odysseus and Aeneas’s trip to the underworld creates confusion as to what is similar and what is not. For example, they both enter the underworld because they need to in order to complete the voyages but also because they have been told to do so by the gods. Odysseus enters Hades in order to find the prophet Teiresias to guide him back to Ithaka, even though by going to this meeting he is risking his life, and Aeneas enters the underworld to see his father who tells him of the future of the city he is about to found.

One of the main contrasts of the two poems is that Odysseus focuses more on the past of his life; he is trying to get home where he was before, in the underworld he sees his fallen friends from Troy, he is trying to get back to his wife and son etc. Aeneas on the other hand is much more focused on the future; he is also trying to get home, but that home does not exist yet, besides that, while seeing his old friends he also finds out about the future of his generations and yet even more about the city he is on his way to establish.

This could bring us to the point of Homer’s vs. Virgil’s reasons for writing their poems; as mentioned earlier, Homer wrote his poem for entertainment purposes. This explains why the majority of book eleven is made up of Odysseus meeting his old friends and great warriors of the war; through telling their stories, Homer entertained the readers and the audience by letting them imagine how the heroes act after their death (what still matters to them, which quarrels have not been forgotten etc.).

Virgil on the other hand skips most of the greetings of Aeneas with old friends and focuses instead on the meeting with his father. There, while including sentimentality, the main point of the meeting is for Aeneas and the readers to find out about where the rulers of Rome came from. Aeneas in the underworld gets to see, although not speak to, his future son, the future Caesars and learns all about the glory of the future empire.

Even the description of the underworld itself may fall under the same entertainment vs. glorifying Rome purposes. Homer’s Hades is filled with darkness, screams and blood; even in order to get the spirits to talk to him, Odysseus has to give them fresh blood to drink (“whom you allow to enter where the blood is will speak to you” 164). That image going alongside the terrifying dark description of Hades shows how brave Odysseus was; despite the fact that he does confess “…I grew sick with fear.” (46).

This is an entirely different perception of the underworld Aeneas enters: even though on the outside it is surrounded by the souls of the unburied who incite fear, once Aeneas has gone through the darkness and the souls he meets his father in a “…places of delight… green park land” (855). This is an interesting description because it suggests to the readers that once you pass through the darkness and hardship, you are rewarded with happiness and freedom.

Through this Virgil could be describing not only everything Rome’s founder had to do for the city, but also glorifying Augustus by describing that none of the benefits of Rome have come easily. Even small remarks such as “Some train on grassy rings, others compete In field games” (860) could be referenced back to the how strong and hardworking the Roman nation is.

While glorifying Rome and Augustus, Virgil also includes some subtle criticisms or questions about the founder of Rome. First of all, while Odysseus was able to enter Hades alone, Aeneas had to be shown the way by the prophetess and servant of Apollo: when following her heels Aeneas walked
with determination and pride, but without her fear overwhelmed him.

This could suggest that Aeneas is not in fact as great and fearless as he may seem. Besides that, one of Aeneas’s main tasks was to retrieve the golden bough (would the whole notion that it was golden signify that the Romans are now a “golden” nation?) which only those who are destined by fate can take down easily. Aeneas however could not even find the bough himself, his immortal mother had to send doves to lead the way. Afterwards, when his mother did show him where the golden bough was, “…though it clung, [he] greedily broke it off,” (298).

The fact that the bough clung could be interpreted in two ways; for those who were reading it to see the glory of Rome, it could suggest the battle between Juno and Venus with Aeneas caught in between them, and the fact that he does take it down in the end suggests that the gods are in his favor after all. For those who are open to the criticism of Rome, it could be interpreted as the fact that Aeneas was not entirely brought their by fate, that maybe he specifically did not have to be the founder of Rome, but Venus made it happen.

Furthermore, the word “greedily” is interesting to have been used in this context: when reading about a hero who has established one of the greatest empires one would not expect him to be greedy, rather fearless but calm and level headed; Aeneas greedily ripping off the bough does not create and image of a hero.

In conclusion, Virgil’s “The Aeneid” greatly resembles Homer’s “The Odyssey” and this is seen clearly through the poets’ descriptions of the underworld. However, while “The Odyssey” was created for entertainment purposes, Virgil has managed to subtly praise and criticize his city, its ruler and its founder making his poem, and book six specifically, full of surprises.

Analysis of The Aeneid and The Odyssey. (2016, May 10). Retrieved from https://studymoose.com/analysis-of-the-aeneid-and-the-odyssey-essay 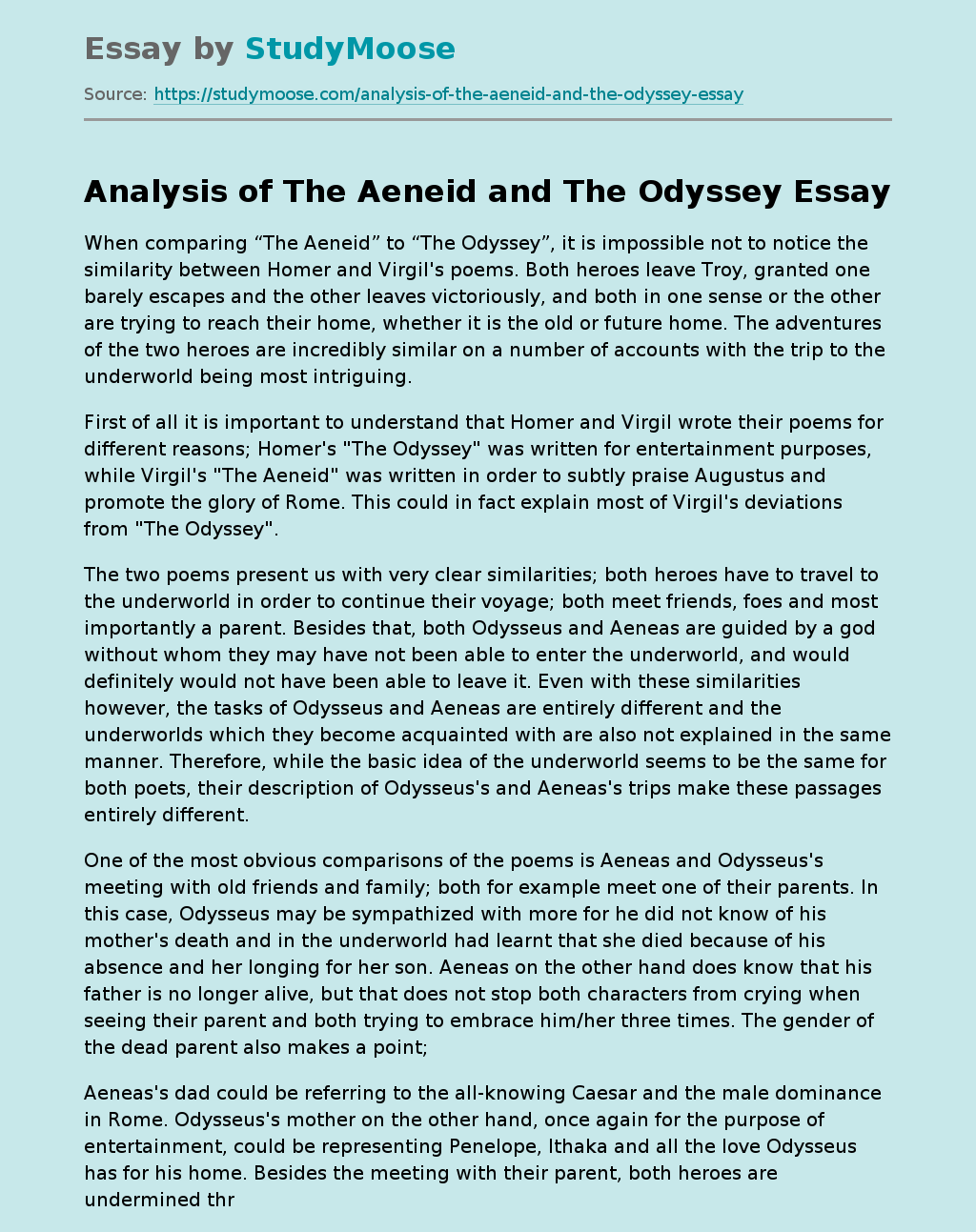