Storytelling in Homer’s The Odyssey and Virgil’s The Aeneid

Storytelling was very essential to the history of man. For many years, storytelling was the crucial means which enabled man to record history. In the absence of written records, oral tradition became necessary in terms of documenting the experiences of man. Through the oral tradition, the history of man was passed on from one generation to another. While that kind of storytelling may reveal a different or exaggerated version of what actually transpired, the changes made do not undermine the importance of the story.

Don't use plagiarized sources. Get your custom essay on
“ Storytelling in Homer’s The Odyssey and Virgil’s The Aeneid ”
Get custom paper
NEW! smart matching with writer

Two texts which are part of the oral tradition are “The Odyssey” by Homer and “The Aeneid” by Virgil. The stories conveyed in both epics would not have reached the present generation if it was not for the act of storytelling. Although both Homer and Virgil prove to be notable storytellers, they do not tell their stories the same way. As proven in their epics “The Odyssey” and “The Aeneid,” Homer and Virgil exhibit similarities and differences in their storytelling.

Homer and Virgil are similar in their storytelling in terms of structure.

Their first similarity lies in the form of the dactylic hexameter (Farrell). Poems which are from Greek and Latin origin follow a specific rhythmic pattern. Epics such as Homer’s “The Odyssey” strictly follow the scheme of the dactylic hexameter. In this rhyme scheme, epics are required to have verses with lines which consist of 18 syllables. In this pattern, the first syllable for every three syllables is accented. However, the text is oftentimes presented in the form of prose.

The Odyssey” is essentially the story about a Greek hero named Odysseus and the difficult journey back to Ithaca after the collapse of Troy. Homer does not begin his narration immediately after the Trojan War; instead, he starts his storytelling a decade after the battle in Troy. When the epic begins, Odysseus is situated in the island of Ogygia, where the goddess Calypso has held him captive due to her love for him. It is not until Book XI of the epic that the readers would learn what really happened after the fall of Troy, when Odysseus recounts the events for Phaeacians.

Meanwhile, “The Aeneid” is the story of the Trojan named Aeneas who sails to Italy from Troy because he is destined to become the ancestor of the Romans. He and other Trojans are forced to flee Troy after the attack of the Greeks. Virgil does not begin the story after the fall of Troy; Aeneas is already at sea when the epic poem begins (Green xiv). It would be later on in the story when Aeneas narrates in a banquet what occurred in the siege of the city. Therefore, Homer and Virgil are similar in their manner of storytelling because they start their epics in medias res.

Another notable similarity between Homer and Virgil as storytellers is their invocation to the Muse. Both Homer and Virgil open their poems through an invocation. In “The Odyssey,” Homer writes: “Tell me, O muse, of that ingenious hero who traveled far and wide after he sacked the famous town of Troy. ” He ends the first paragraph with this sentence: “Tell me, too, about all these things, O daughter of Jove, from whatsoever source you may know them” (Homer). As proven by the aforementioned statements, Homer clearly finds it necessary to begin his storytelling by calling on the Muse.

Virgil also exhibits Homer’s manner of narration by invoking the Muse in Book I of “The Aeneid. ” Virgil writes: “O Muse! the causes and the crimes relate; / What goddess was provok’d, and whence her hate” (I. 11-12). However, it is necessary to point out that a slight difference between the poets’ invocations. While Homer mentions the Muse on the first line of the epic, it is only in the 11th line wherein Virgil invokes the Muse. Nonetheless, the mere mention of the Muse in the first books of their epics reveals that the poets found the invocation as a necessary part of their storytelling.

Indeed, Homer and Virgil are similar in their storytelling as they both invoke the Muse in the beginning of their epics. Also, Homer and Virgil share another similarity in storytelling because of their chosen subject matter. Each poet tells a story which involves the city of Troy and its eventual demise. In both ‘The Odyssey” and “The Aeneid,” Troy plays a crucial role in the whole narrative (Risden 19). Specifically, it is the fall of the city which serves as the starting point of the epic.

The adventures of Odysseus officially begin after the Trojan defeat; following the victory of the Greeks, he and his comrades have to overcome obstacles for ten years before the hero could safely go back home. Meanwhile, the story of Aeneas starts when the city of Troy is under attack. It is not until he leaves the fallen city that he is able to embark on a trip to Italy. The fall of Troy is truly essential in both epics, and the poets emphasize that fact through the way they tell their respective stories. Hence, Homer and Virgil show another similarity in their storytelling through their focus on the fall of Troy (Risden 19).

Coincidentally, it is also the story of Troy which marks the first difference between the storytelling of Homer and Virgil. Both storytellers reveal different perspectives in “The Odyssey” and “The Aeneid. ” On one hand, Homer recounts the events of Troy and the Trojan War from the perspective of the Greeks (Risden 19). Since Homer is known for the Greek epics, it is only natural that his storytelling would favor the perspective of the Greeks. In “The Odyssey,” there are three accounts of the battle of Troy as told from a pro-Greek point of view.

The first account is found in Book IV, where Menelaus tells both Helen and Telemachus about Odysseus and their experience when they were inside the wooden horse. Menelaus describes Odysseus as such: “What courage he displayed within the wooden horse, wherein all the bravest of the Argives were lying in wait to bring death and destruction upon the Trojans” (Homer). The second account is in Book VIII, wherein the blind poet named Demodocus sings about the Trojan horse; the song allows Odysseus to reminisce about the war, making him cry in the process.

The last account can be found in Book XI; in this book, it is Odysseus himself who narrates his story to the Phaeacians (Homer). In the context of the poem, Homer narrates the story of Troy targeted at a Greek audience, for it was the experiences of the Greeks which are indicated in his account. On the other hand, the storytelling of Virgil presents the perspective of the Trojans (Risden 19). In “The Aeneid,” Virgil retells the story of Troy from the point of view of Aeneas, a Trojan. This is why the narration of the epic offers a pro-Trojan, rather than a pro-Greek, sentiment.

In Book I of “The Aeneid,” Aeneas goes into Juno’s newly built temple concealed in Venus’ cloud; upon seeing the series of pictures of the Trojan War on the relief inside the temple, he weeps as he recalls the demise of his city (I. 464-94). This incident is similar to the reaction of Odysseus to the song of Demodocus. It is during this time when Dido sees Aeneas in grief, and as a result, she welcomes him into her court. It is in Book II where Aeneas narrates to the Carthaginians the destruction of the Troy.

In the tradition of Greek epics, storytellers would repetitively tell the story for a long period of time before they were written down in records (Risden 20). The manner of frequent retelling would become evident in the written version, as there would be the repetition of words and images within the single text. This repetition is merely a reflection of the traditional manner of storytelling. Homer was a part of the oral tradition; in fact, it was said that during his time, epics were usually sung instead of spoken (Farrell). In contrast, epics during Virgil’s time were known to be spoken.

This is the reason why the plot was more determined. Virgil was not a part of the ancient Greek oral tradition, so his work was no longer characterized by repetition. Hence, the storytelling of Virgil is more concise than the storytelling of Homer. Homer and Virgil are two notable names in the realm of epic poetry. Both are remarkable figures in the name of antique literature due to epics such as ‘The Odyssey” and “The Aeneid” respectively. Homer and Virgil even share certain similarities in terms of their storytelling. Most of their similarities lie on the structure of their epics.

Both “The Odyssey” and “The Aeneid” are in the form of the dactylic hexameter; they also begin in medias res with an invocation to the Muse. In addition, the epics of Homer and Virgil speak about the fall of Troy. Nonetheless, there are also differences between the storytelling of the two epic poets. Homer’s “The Odyssey” is narrated from the perspective of the Greeks while Virgil’s “The Aeneid” is from the Trojan point of view. Lastly, their storytelling is different due to the traditional manner of Homer and the spoken method of Virgil. Indeed, Homer and Virgil are two epic poets who are both gifted and diverse in their storytelling.

Storytelling in Homer’s The Odyssey and Virgil’s The Aeneid. (2016, Sep 22). Retrieved from https://studymoose.com/storytelling-in-homers-the-odyssey-and-virgils-the-aeneid-essay 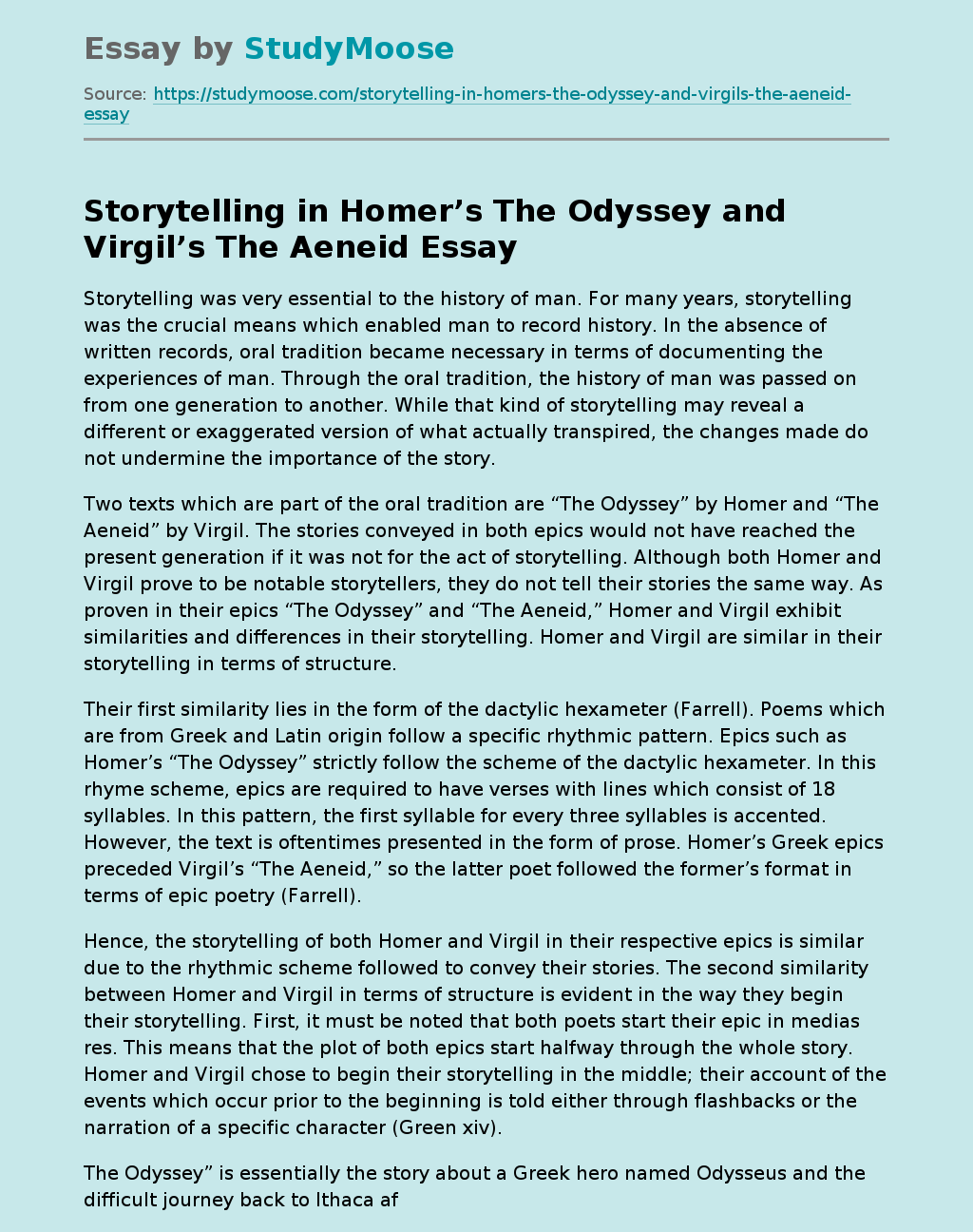