The Role of Women in The Odyssey

The Odyssey, by Homer, is an epic poem based on the story of an ancient Greek hero, Odysseus, and his twenty year journey—ten years spent fighting in the Trojan War and the other ten spent traveling home. In the poem, Homer presents the theme of the role and nature of women. Men were the dominant gender in ancient Greece, and women, who were inferior, were only valued for their beauty and their ability to reproduce. However, in this poem, Homer both exemplifies and defies those standards by presenting certain female characters with qualities that show the various stereotypes in ancient Greek society.

Don't use plagiarized sources.
Get Your Custom Essay on The Role of Women in The Odyssey Just from $13,9/Page

Through several of the female characters, Homer portrays women in three different ways. The first type of woman is the bad, disloyal woman, such as Cyltemnestra and Melantho the maidservant. Other women are portrayed as the manipulative seductress, such as Calypso and Circe. The third type of women is the good, faithful, intelligent woman. These women include characters such as Queen Arete, Nausicaa and, above all, Odysseus’ wife Penelope.

Homer uses these characters to depict the several ways in which women were viewed by society.

The first type of woman, the bad, disrespectful woman is portrayed through two characters. Clytemnestra is the unfaithful wife of Agamemnon, and Melantho, is the disloyal maidservant of Penelope. The story of Clytemnestra is repeated numerous times throughout the poem. When Odysseus travels to the underworld, the Kingdom of the Dead, he meets Agamemnon, the dead husband of Clytemnestra. He is describing his story to Odysseus when he says, “…she turned her back on me, well on my way to Death—she even lacked the heart to seal my eyes with her hand or close my jaws…—what a monstrous thing she plotted, slaughtered her own lawful husband!” (Homer 11. 481-487)

Clytemnestra is referred to as a monster, and a woman with no heart, because of her ability to kill her own husband for her own good. Melantho the maidservant similarly is portrayed as a monster. On multiple occasions, she mocks Odysseus, neglects Queen Penelope, and also disrespects her by having an affair with one of Penelope’s suitors. As a result of her harsh actions, when Odysseus returns, she is killed along with the rest of the suitors. This exemplifies how women who act this way in ancient Greek society are treated and dealt with.

In addition to Clytemnestra and Melantho, there are two other women who represent the bad woman. Calypso and Circe are the evil and manipulative seductresses. Odysseus arrives to Calypso’s island and is held captive by her for almost seven years. When Odysseus finally realizes that he needs to leave, she tries to bribe him by granting him immortality if he will stay and live with her forever. She compares herself to Odysseus’ wife Penelope when she says, “I just might claim to be nothing less than she, neither in face nor figure. Hardly right, is it, for mortal woman to rival immortal goddess? How, in build? In beauty?” (Homer 5. 233-236) Calypso tries to convince Odysseus that his wife cannot compare to her because of her beauty and build as a goddess. She does not see love past beauty and does not understand the kind of love that Odysseus and Penelope share. She tries to use her powers to manipulate him and get her way, however she fails to do so.

Another example of a seductress in the poem is Circe. Circe attracts Odysseus and his men by her beautiful singing voice. The men’s desire for her allows her to take advantage of the weak men and turn them into swine. Circe is also able to seduce Odysseus so much that he also ends up staying there with her for a year without even knowing it. Circe represents not only an evil seductress, but a powerful sorceress who serves as a threat to Odysseus and his men. Homer’s portrayal of both Calypso and Circe as the seductresses is to show that some women’s appeal and seducing ways can be a threat or danger to men. Although Odysseus is a smart and witty man, even he found himself caught in the hands of these two seductresses because of their tempting, manipulative ways. In contrast to all of these women, the most significant type of woman in ancient Greek society that is portrayed in the poem is the good, intelligent and faithful woman.

Among the mortal women in the poem, a few who represent this type of woman are Queen Arete, Nausicaa, and Penelope. Queen Arete and Nausicaa are very helpful to Odysseus when he arrives to their land. Nausicaa finds him and guides him to find his way to Queen Arete and King Alcinous. Once he finds his way there, Queen Arete is very hospitable, and she helps him find his way home to Ithaca. Penelope, however, is the most significant female character in The Odyssey. Through her actions, she proves to be a very wise and clever woman. She continuously stays faithful to her husband for twenty years of his absence. Over the whole period of Odysseus’ absence, she leads the suitors on by devising plans to keep them there, continues to receive gifts, and gains wealth while she waits for her husband’s return.

Even after his return, she is wise enough to be cautious and test him to be sure that he is really her husband. After this all occurs, she becomes famous for her wisdom, intelligence, and cleverness. When Agamemnon is speaking to one of the suitors in the Land of the Dead, he says, “what a fine, faithful wife [Odysseus] won! What good sense resided in [his] Penelope—…The fame of her great virtue will never die. The immortal gods will lift a song for all mankind, a glorious song in praise of self-possessed Penelope” (Homer 24. 212-218).

Homer uses Penelope’s character as a way to show how women like her are viewed by society. Through her actions, she is portrayed as a loyal wife, and she also obtains qualities similar to the seductresses. Even though she is clever and manipulative with the suitors, she is still considered a good, faithful woman because her wit and cleverness is viewed in a positive way. The gods praise and commend her for her wisdom and virtue. She is one of the only women who are able to defy the standard that all women are inferior.

Homer presents this variety of women to portray the different types of stereotypes in ancient Greek society. The first stereotype is the unfaithful, disloyal woman, which is represented by the characters Clytemnestra and Melantho. The second stereotype is the manipulative temptress, represented by Calypso and Circe. The third stereotype is the wise, intelligent, and loyal woman represented by Arete, Nausicaa, and Penelope. Women during this time are considered the inferior gender and are expected to abide by the social standards and stereotypes that society has placed upon them. Homer uses several female characters in The Odyssey to depict both the women who exemplify this standard, and the women who defy this standard.

The Role of Women in The Odyssey. (2016, Oct 12). Retrieved from https://studymoose.com/the-role-of-women-in-the-odyssey-essay 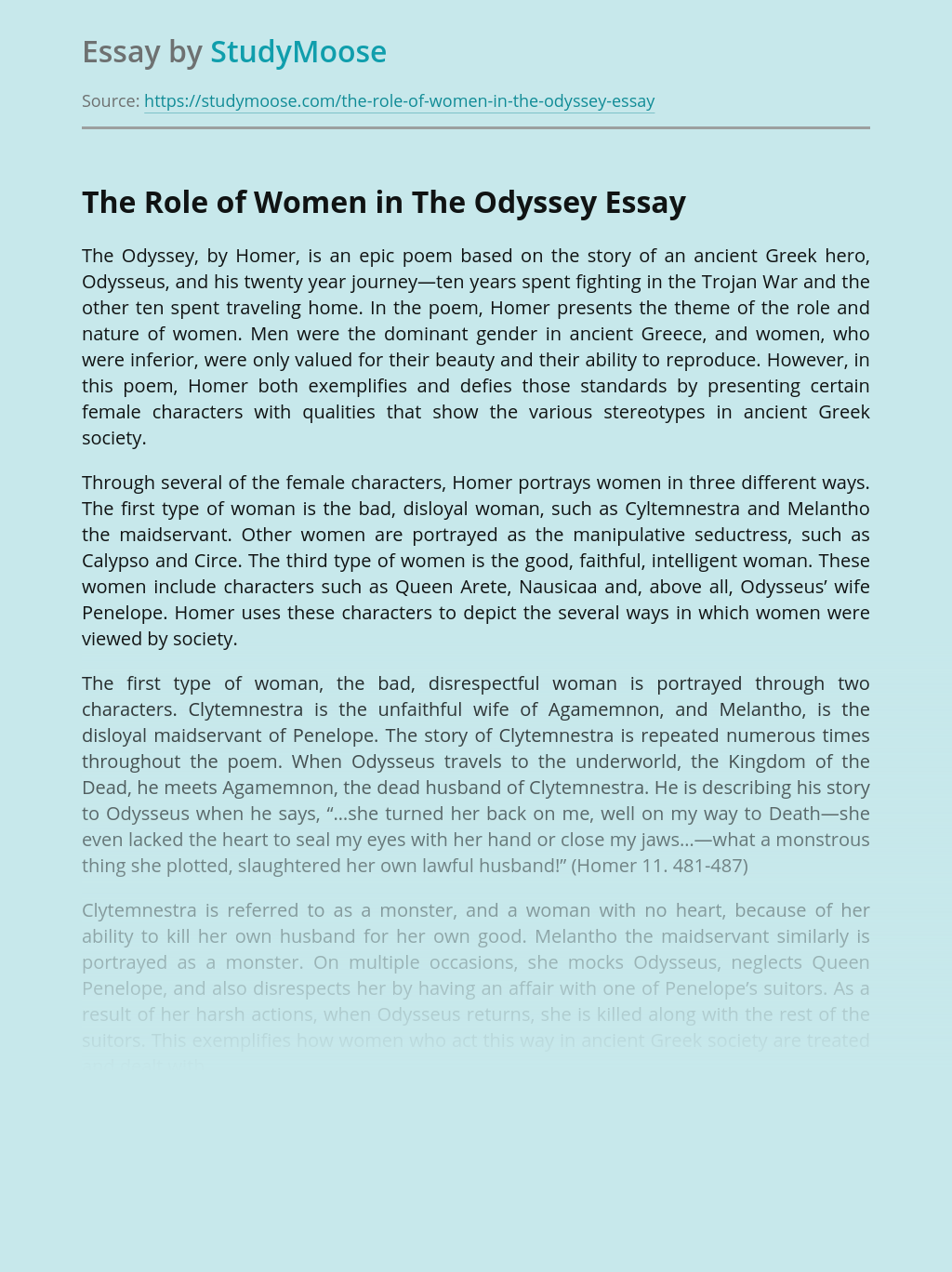 “The Iliad” as Glorification of War

“The Iliad” is known to be one of the most famous Greek poems written by a blind poet Homer. The influence of the poem on the Roman, Greek and European cultures was considered great and enormous. The Iliad is dated circa 8th century BC, although now some scholars such as Martin West and Richard Seaford...

Greek Mythology, set of diverse traditional tales told by the ancient Greeks about the exploits of gods and heroes and their relations with ordinary mortals. The ancient Greeks worshiped many gods within a culture that tolerated diversity. Unlike other belief systems, Greek culture recognized no single truth or code and produced no sacred, written text...

Get Essay
The Character of Achilles

Achilles is the main character in Homer’s The Iliad translated by Robert Fagles. The Iliad is the story of the battle of Troy, in which Greek heroes fight and die, with much interference from the various gods and goddesses. The story ends when Achilles gives Hector’s body back to King Priam and Hector is buried....

When does a boy end up being a male? This rite of passage is explored in Robert Fagles’ translation of Homer’s legendary poem, The Odyssey. Odysseus (king of Ithaca) combated in the Trojan War for 10 years and after the fall of Troy he invested the next ten years attempting to get house. He left...

Aphrodite/Role of Women in Illiad

Throughout the many annals of Greek mythology, there have been many fascinating characters, ranging from the beginning of time with Gaia and Uranus, to their children, Cronus and his wife Rhea, through the Titanomachy, the war of the Titans versus the Gods, and finally to their children, the Olympians themselves, and the dawn of the...