What caused the downfall of Oedipus?

The issues connected with religious roles and the roles of gods were relevant during the fifth century among Athenians. Along with development of humanism, a lot of people, especially those, who occupied high positions in Athens, started to consider themselves independent from the gods and their will. The controversy whether the lives of humans depend on fate or their free will was really strong. In the paper we are going to consider this problem related to the tragedy Oedipus Rex by Sophocles and will try to prove that Gods and Oedipus contributed to his tragic flaw equally.

Don't use plagiarized sources. Get your custom essay on
“ What caused the downfall of Oedipus? ”
Get custom paper
NEW! smart matching with writer

In the year 428 BC Sophocles produced his famous tragedy “Oedipus the King”. This tragedy was written the first but in reality presents the second tragedy of the three Theban plays. Most of the critics, including Aristotle considered the play the greatest tragedy that was ever written. Aristotle presented all his ideas about Greek tragedies in his well-known work “Poetics”. The way he related “pity and fear” to “catharsis” caused a lot of controversial questions for Western philosophers, namely about the strong attraction of the tragedies and hard fates of tragic heroes for the audience.

It seems necessary to briefly explain their main meanings: hamartia – a serious mistake, which is the main reason of downfall of the hero, this mistake is often made because of hubris – extreme pride, after the downfall the hero learns a lesson or makes a discovery – this is defined by the notion anagnorisis, reversal of fortune was called peripeteia, nemesis – meant some circumstances, which the hero could not avoid, practically his fate. (Aristotle, 13). The last one – catharsis – denotes the feeling of fear and pity experienced by the audience, in closing this should be a person who is “between these extremes .

. . a person who is neither perfect in virtue and justice, nor one who falls into misfortune through vice and depravity, but rather, one who succumbs through some miscalculation” (Aristotle, 18). Most critics agree that Oedipus is the ideal tragic hero. Indeed, if to evaluate the correspondence of Oedipus to the characteristics of Aristotle, he meets all the parameters. Aristotle stated, that the audience ought to see the tragic hero as “larger and better version of themselves” (Aristotle, 38).

In fact Oedipus was able to earn this respect, his nobility was out of question as he was born in a royal family, although raised by adoptive parents, who were also the King and Queen of Corinth, and finally, when he managed to solve the riddle of Sphinx he got the dominion over the city. The result was, that the nobility of Oedipus was confirmed from different sources, and the audience revealed profound emotional attachment and honor. Oedipus’s hubris could be seen in his desire to prove to his city, that he was able to solve the mystery and save the citizens from the plague.

Besides he was rather self assured, which can be confirmed by his own words in the opening lines of the prologue when he states “Here I am myself–you all know me, the world knows my fame: I am Oedipus. ” (Sophocles, 11). Oedipus had every reason to believe, that he was a prominent personality, and he wanted to prove his high status for his subordinates again and again, in this way his strength unexpectedly turned into his weak side. Hamartia of Oedipus is very important and sophisticated.

His tragic flaw rooted from his lack of knowledge about his true identity, but he could not be responsible for his flow, as he was not able to change anything through his actions. In fact, Oedipus didn’t make a huge mistake, he suffered the consequences of somebody else’s old mistake in the past. But his character features as obstinacy, rashness, self – confidence also contributed to the tragic flaw. He couldn’t stand that something was not according to his will, when nobody wanted to confess in the murder of Laius, he became immediately impatient: “You, you scum of the earth .

. . out with it, once and for all! ,” and “Enough! Such filth from him? Insufferable–what, still alive? Get out–faster, back where you came from–vanish! ” (Sophocles, 21). Thus, as a result, on one hand Oedipus could not control his past and decision of the people whom he depended upon, when he was small; on the other hand, his ego served as catalyst for his actions and for the mistakes he made. Actually the peripetea is closely related to hamartia of Oedipus, as the bad fortune followed the hero from his very birth.

Catharsis of the audience is characterized by very profound emotions and feelings of sympathy towards Oedipus, when he instead of committing suicide, chose terrible tortures for himself. He remained in darkness, but not only literally, but also in intellectual and religious darkness (Haigh, 189). When Oedipus realized what had happened to him in reality he said: “Oh, oh, then everything has come out true. Light, I shall not look on you Again. I have been born where I should not be born, I have been married where I should not marry, I have killed whom I should not kill; now all is clear” (Sophocles, 32).

Oedipus was dead, as he couldn’t enjoy his life benefits; on the other hand he was not dead in a usual meaning of death. Being blind he belonged neither to this word nor to the other word, thus his suffering was not finished even at the end of the play. The downfall of Oedipus was thus unequalled, as was different from the other tragic heroes and certainly appealed more to the audience, causing deep pity and sympathy for the hero. Initially, an intelligent and self-assured Athenian due to his characters could be actually a successful ruler of the country.

The irony of the fate is that exactly these characteristics of him caused his downfall. The sphinx was used by the author as a metaphor presenting the three aspects of the life of Oedipus as a tragic person. In the play the sphinx suggested solving the riddle for all people, who wanted to become the rules of Thebes: “What is it that walks on 4 feet and 2 feet and 3 feet and has only one voice, when it walks on most feet it is the weakest? ” (Buchanan, 17). Oedipus turned out to be the only one, who found the correct answer to it – man.

However this riddle was closely related to the life of the main hero. A child, being very small, walks on four feet, besides he is too weak and depends completely on other people around him. Oedipus was the son of Jocasta and Laius and was supposed to be killed in order to break the prophecy, that he would kill his father and live with his mother. Thus the decision about his death or his life didn’t belong to him, but to some other people. As soon as man becomes an adult, he uses two feet for walking.

Trying to escape the prophesy of the oracle Oedipus ran away for Corinth, but he didn’t know that his decision was wrong and led exactly to fulfilling of the prediction. This is the second metaphor of Aristotle. The third and the last part of the riddle from Sphinx was fulfilled when Oedipus became the king of Thebes, married Jocasta, who was his mother, and tried to save his city from the plague. After finding the murderer of Laius, Oedipus revealed the terrible truth about his own birth. Realizing the whole situation, Oedipus decided to blind himself and thus presented the third part of the riddle where a man had to walk on three feet.

Oedipus was quick-witted to give the correct answer to the riddle, he was clever enough to investigate the murder of Laius and to find the murder. Thus his intelligence was his tragic flaw. This was only due to his personal qualities and traits of his character, that Oedipus followed the prophecy and came to such a tragic end. His downfall was not the consequence of his malicious act, but of his nature. If not his courage and persistence, he would probably hardly risk his life and try to solve the riddle of the sphinx.

In reality it is clear, that the strong sides of Oedipus turned out to be his weaknesses and led to tragic end. The whole destiny of Oedipus was based on paradox – his main goal was to escape from the prediction and he did everything just to fulfill it. Should we then conclude that this happened due to God’s control? If yes, then it is not clear to what extend could the Gods control our lives. Then, the message of the author was, that people should not rely on their own decisions and ideas, as at any rate they could not be able to determine their own fate, even if they seem to know what they should do.

This conclusion is too superficial, in reality Sophocles hardly intended to underline, that human lives are fully in the hands of Gods, but instead, that people never know what will happen to them. Oedipus could not know, that he killed his father and married his mother, he made his choice according to his nature and according to what he considered was correct. This doesn’t mean that somebody was pushing him to act in this or that way or somebody influenced his decisions, the hero made his choice and came to an inevitable end.

What caused the downfall of Oedipus?. (2017, May 23). Retrieved from http://studymoose.com/what-caused-the-downfall-of-oedipus-essay 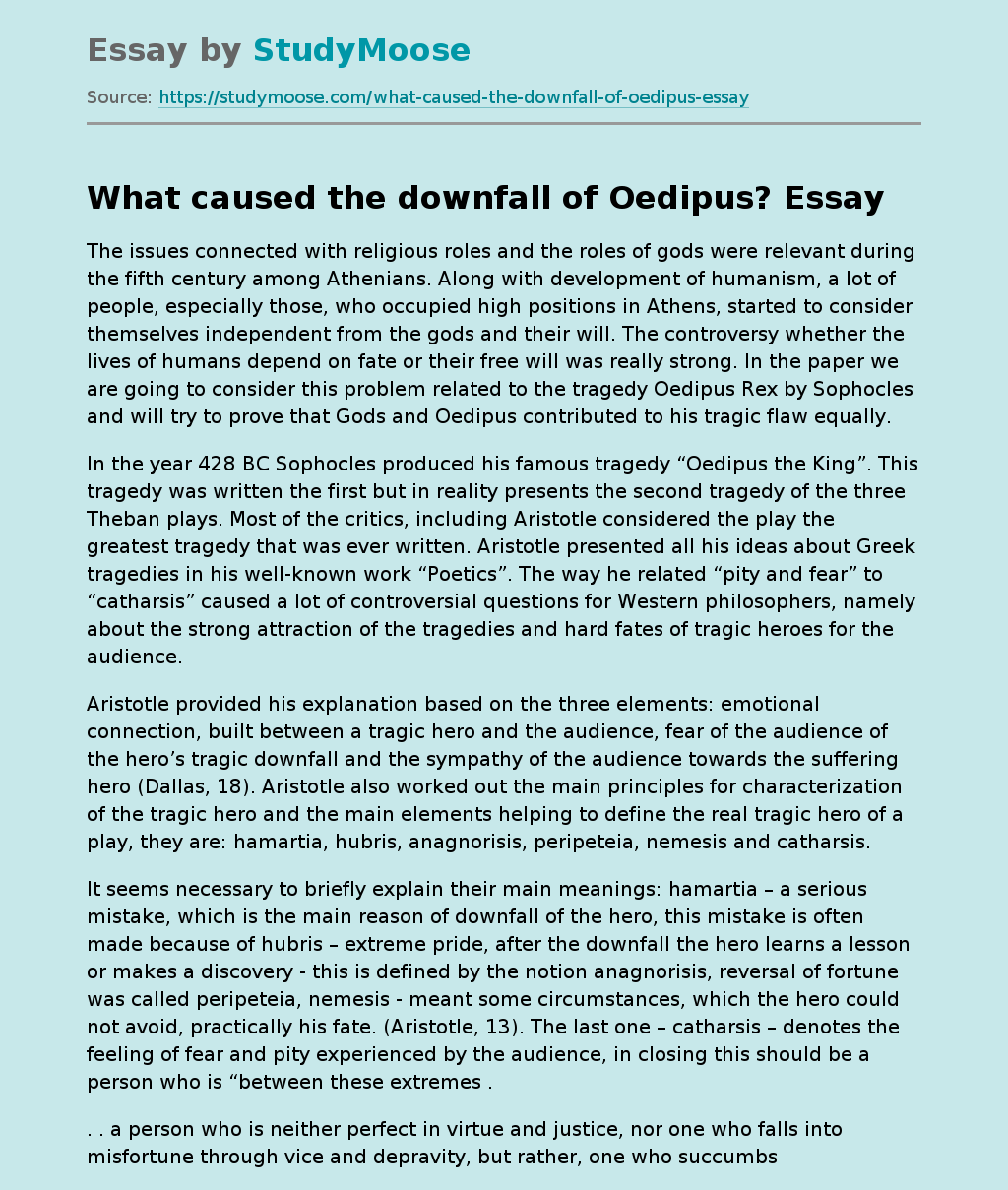