Overpopulation Is Caused by Poverty

Bangladesh is one of the poor countries with one of the highest population of the world. Is the country poor because of the huge number of people or the poverty itself is the reason behind the overpopulation? To answer this question, I have looked at the overall development condition and population of the world and tried to find the missing links between the two. First I presented some facts about world population and demography. Then I analyzed the Malthusian and Marxist views on population.

Don't use plagiarized sources. Get your custom essay on
“ Overpopulation Is Caused by Poverty ”
Get custom paper
NEW! smart matching with writer

I talked about the existing views that considered population growth as the main reason behind poverty. Then I discussed my arguments about those view and discussed how population growth is not the primary cause of low standard of living, gross inequalities or limited freedom choice that characterize much of the developing world. I tried to find the main reasons behind the impoverishment of the poor countries and how those lead to overpopulation.

Human race came into existence around 2 billion years ago.

This dramatic population growth is termed population explosion because within less than 300 years the number of people mushroomed to more than 6 billion whereas before this, world population grew very slowly for millions of years.

At this very moment, nearly 7 billion people are sharing this planet. By 2050, the population is expected to reach 9 billion. The world population is very unevenly distributed by geographic region, fertility and mortality levels and age structure. Here we also have to consider the term demographic transition: transition from high birth and death rates to low birth and death rates.

Now the question is why birth rates are so high in the developing countries? In 1798, Thomas Malthus proposed a theory that determines the relationship between population growth and economic development. According to him, the poor countries are poor because of the population growth. Eliminate the population problem and the problem of poverty will be solved by itself. To eliminate the extra people, positive and preventive checks are necessary. Positive checks are famine, natural disasters, war etc which according to him is a good way to get rid of the unnecessary people who are burden to the society. Preventive checks would be only moral restrain because birth controls were considered as sins according to the Catholic Church. Malthus was not aware of the technological progress that would occur and thus he came up with the theory that food production will not be able to keep up with the population growth. Thus the solution was to get rid of the poor people.

Karl Marx saw the Malthusian point of view as an outrage against humanity. Marx pinpointed the fact that with technological progress, there would be more production. So capital would be increasing too. However, the few capitalist who own all the resources exploit the poor workers and keep them poor. So poverty is the result of a poorly organized capitalist society where there is no equal distribution of wealth. From the Marxist point of view, overpopulation is not the reason behind slow economic growth and development. Though the theory of Malthus is much criticized and controversial, his ideas are still remaining in the present world. Many theorists and economists see the reduction of population growth through severe measures as the easiest way of ensuring economic prosperity in a developing country. According to them, unrestrained population increase is the main reason behind low standard of living, malnutrition, ill health, environmental degradation, and many other economic and social problems.

There is a theory known as ‘population-poverty cycle’. This theory states that overpopulation makes the economic, social, and psychological problems more complicated. As more children are born every day, there is less savings rate per person in the household and national level. Because of the uncontrolled population growth, the government fails to provide the basic necessities for the additional people. This leads to low living standard of the existing generation and eventually poverty is transferred to the next generation.

At present China is the most populous country in the world with a number of 1.34 billion. This country has undertaken one of the most harsh and coercive population control policies in the early 1980s- one child per family policy. Though this policy dramatically reduced the growth rate, is caused many socio-economic problems and controversies. However, the decline in the fertility rate in China through one child policy is less successful than approaches based on women empowerment and education in some parts of India, such as the state of Kerala. This shows us that population no longer remains a problem even though there is slow economic growth by focusing on empowering people, especially women.

My thesis is that poverty causes overpopulation and to solve both the problems, other issues are needed to be taken care of. One of the main causes that keep poor countries and poor people poor is unequal distribution of wealth and natural resources. The developed countries consist of one quarter of the world’s population but consume almost 80% of the world resources. In 2005, the wealthiest 20% of the world accounted for 76.6% of total private consumption. The poorest 20% consumed just 1.5%. When one child is born in a developed country, the amount of money and resources spend behind it is equivalent to 16 children in the developing countries. Therefore the developed countries should cut back their very high consumption instead of asking developing countries to control their population growth. However they do not do that in an attempt to hold down the development of the poor countries to continue dominance over them and to maintain the very expensive living style. So they made population growth the main reason behind poverty to distract everyone from the real reasons.

They pressurize the poor nations to adopt aggressive population control programs even though they themselves went through a period of sizable population increase that accelerated their own development processes. So as the LDCs are kept poor, no or less development occurs and thus generates overpopulation. Also a huge amount of resources are hold idle. For example, only 12% of all the potential arable land is under cultivation. So the land actually being cultivated amounts only a fraction of its potential. According to one web resource- ‘Enough arable land exists in India to give each person in the country approximately half an acre. In famine-ravaged Ethiopia, each person could have three-quarters of an acre of arable land. Africa, the poorest continent, has 20.2% of the world’s land area, and only 13% of its population.

North America has a whopping 2.1 acres of arable land per person!’ So many areas with potential resources are under populated and many small areas (urban areas in the LDCs) are concentrated with too many people. This unequal distribution of people in terms of land causes poverty rather than the population growth. Underdevelopment itself is a huge problem. If the governments of the developing countries adopt correct strategies that promote higher levels of living, greater self-esteem and expanded freedom, population will take care of itself. If people are healthy and better educated, they will themselves be aware of the fact that smaller families are better than larger families.

On the other case, if they are uneducated and physically and psychologically weak, the large family will be the only real source of social security. So the birth control programs and severe child control policies will be unsuccessful if there is no motivation to empower and enlighten the people, especially the women. If the women have equal roles and status like the men and have access to birth control, fertility rate will fall by itself. However, the richest people of the developing countries consume most of the resources and deprive the rest of the people of their daily necessities. As the poor people are kept poor they fail to get educated and empowered which leads to low quality of life and overpopulation.

Overpopulation is not the main cause behind poverty. It is the other way around. However, fast population growth is not desirable too. So in order to develop, countries like Bangladesh need to adopt policies that focus on making people aware of the ways to keep the family small. The consequences of rapid population should neither be exaggerated nor minimized. However, it is pretty clear problem of population is not simply a problem of huge number. It is about quality of life and material well being. So if there is not equal distribution of wealth, idle resources, and subordination of women, poor countries and poor people would remain poor and this will lead to the problem of overpopulation.

Overpopulation Is Caused by Poverty. (2016, Nov 07). Retrieved from https://studymoose.com/overpopulation-is-caused-by-poverty-essay 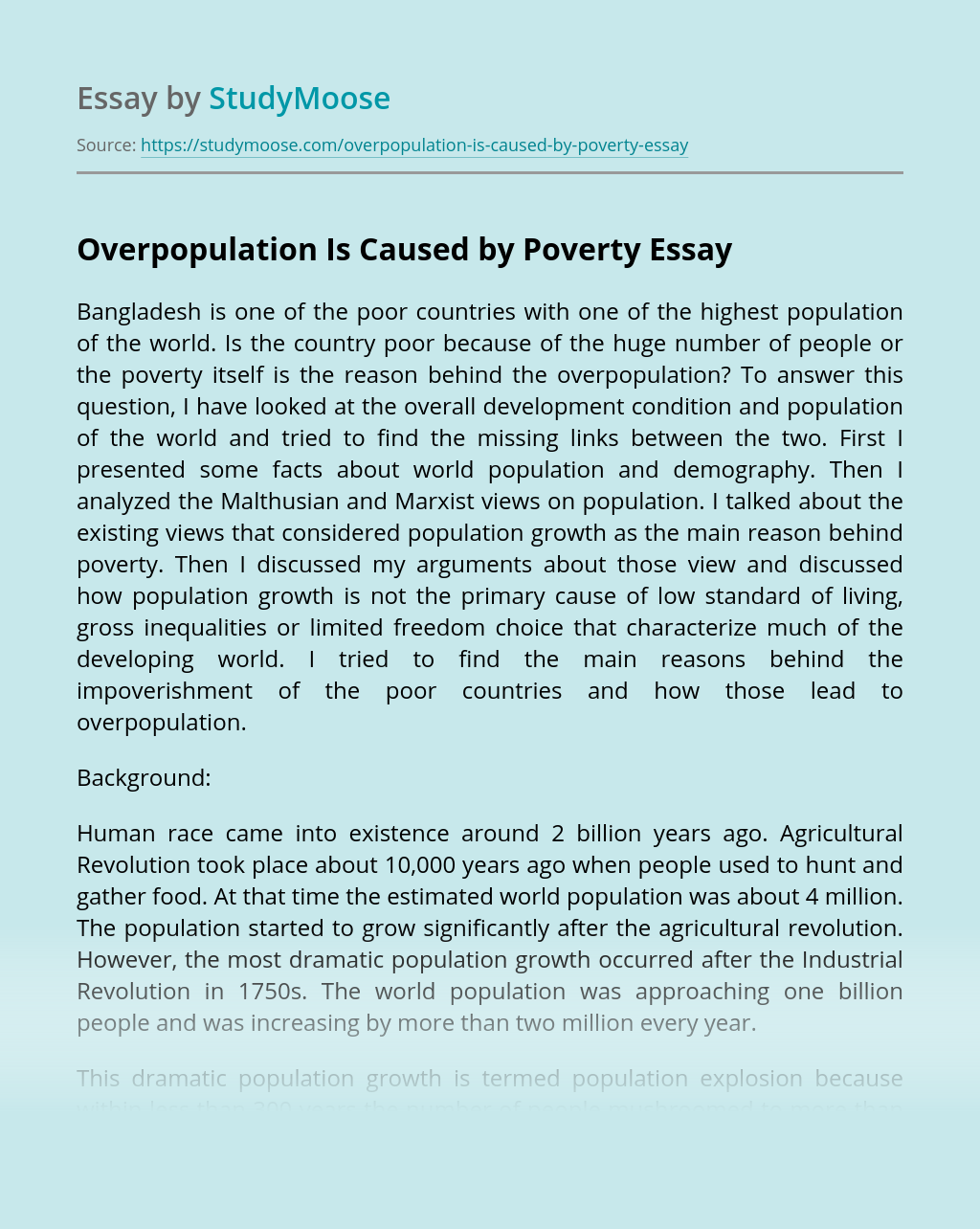