Human society lives in the atmosphere of numerous environmental threats. However, no dangers are as threatening to humanity as those created by humans themselves. Like global warming and the extinction of animal and plant species, overpopulation has already turned into the definitive feature of the postmodern environmental reality. Few strategies have been developed to address the overpopulation issue. The positive effects of those strategies had been but few.

Today, there is an urgent need to develop a global sustainable strategy that will reduce the rates of the population growth to the extent, which will allow humans to meet their present needs without compromising the needs of the future generations.

Don't use plagiarized sources. Get your custom essay on
“ Human Population: The Overpopulation Problem and Sustainable Solutions ”
Get custom paper
NEW! smart matching with writer

Overpopulation: A Review of the Problem A wealth of literature was written about overpopulation, its causes and consequences. Gilland (2008) defines overpopulation as “relation to a country’s ability to feed its inhabitants” (p. 122). In the global contexts, overpopulation implies that the planet no longer possesses resources necessary to satisfy even the basic human needs.

More often than not, the concept of overpopulation is discussed in relation to diet and food consumption patterns. For example, Gilland (2008) provides an extensive review of what a satisfactory average diet is and what nutrition problems usually indicate the presence of the overpopulation issue. Overpopulation is often equated with conditions of living that manifest through continuous imbalance between population numbers and the carrying capacity of land; and here, food and diets are fairly regarded as the basic measures of overpopulation per unit of land (Fellmann, Getis & Getis, 2007).

Overpopulation is problematic because it leads to unavailability of food resources with the caloric content needed to meet individual daily requirements for energy (Fellmann, Getis & Getis, 2007). The situation with developing countries is particularly difficult, because these countries cannot meet the growing demands of the ever increasing population. Difficulties with food production, continuous poverty, climate changes and significant crop losses add their share of complexity to the issue of overpopulation.

For example, Africa’s share of crop production decreased 30% between 1960 and 1990, and further 30% decrease is predicted in the next 25 years (Fellmann, Getis & Getis, 2008). These problems will widen the population-nutrition gap and will turn overpopulation into the basic cause of famines and economic scarcity (Fellmann, Getis & Getis, 2008). Overpopulation marks the beginning of the so-called “plague cycle”, which will lead to the collapse of the food supply systems and will create environmental constraints, which technologies cannot reduce (Cassis, 2004).

The growing pace of technological advancement makes the problem of overpopulation even more controversial, achievements in technology lead to the growing scarcity of natural resources, especially oil and gas. The current state of overpopulation and the continuous population growth on the planet will lead to global crash of the most important supply systems (Cassis, 2004). Urban and densely-populated territories will be among the first to perceive the adverse effects of overpopulation. Their dense population and woefully inadequate sanitation provide the ideal breeding ground for diseases new and old – diseases that will, sooner or later, be carried to all parts of the world through migration and tourism” (Cassis, 2004, p. 178). The poorest parts of the world will experience the drastic consequences of resource depletion and are likely to plunge into anarchy in their fight for survival (Kaplan, 1994). With the population of roughly 6. 8 billion today and 211,000 people added every day, the earth is likely to reach the 9. 2 billion point by 2050 (Johnson, 2007).

Food and health systems will hardly withstand the pressure of the ever growing population. The world’s food supply per capita increased 30% between 1960 and 2000; meanwhile, the world’s oil reserves increased only 3%, and grain production increase did not exceed 2. 1% (Ehrlich & Ehrlich, 2001). Obviously, the time will come when the growing population will need to fight hard to satisfy the growing feeling of hunger. In light of these complexities, the lack of the overpopulation awareness is at least striking. Cassis (2004) is correct in that the media do little to help people better understand how overpopulation impacts the planet.

Most individuals do not have any single idea about the finiteness of natural resources and do not recognize the need to preserve the environment for the future generations. However, the resource pie is far from big enough to divide it into equal pieces among everyone (Cassis, 2004). It is high time the human society reconsidered its consumption patterns and addressed the existing overpopulation concerns, before it is too late. Overpopulation: Living and Nonliving Factors and Positive and Negative Sides of the Issue Definitely, the current state of population on the planet is the result of both living and nonliving influences.

The living factors of overpopulation include the growing availability of food resources (including animals), the growing resistance of the human organism to bacterial infections/ diseases, and the growing life expectancy. Among nonliving factors of overpopulation, the most important are public health improvements, the advances in human knowledge of ecology and biology, better access to nonliving resources like oil and gas, improved transportation and communication and, simultaneously, the growing social gap between different population layers.

The availability of food and better human resistance to bacterial infections and diseases greatly contributed to the population growth on the planet. The past 150 years were marked with the remarkable increase in food production by farmers: between 1965 and 1985 alone, the amount of grain harvested and processed worldwide increased from 630 million tons to almost 2 billion tons (Miller, 1995). Rapid technological advancement led to the development of more sophisticated fertilizers, machinery, and new kinds of seed, which altogether sped up the expansion of agricultural production all over the world (Miller, 1995).

Unfortunately, the distribution of food resources on the planet remains increasingly uneven. Meanwhile, human society continues conquering the most dangerous infections and diseases, making human organism more resistant to various kinds of living organisms. Better health is both the product of better nutrition and better medical practices. The latter are an essential nonliving component of the growing population. Really, significant improvements in medical practices and public health systems made the rapid growth of population possible and even threatening to the stability of the social order on the planet.

Vaccinations, new theories of disease, better systems of food and water supply, and improved waste treatment became the basic prerequisites for the dramatic increase in human population on planet (Miller, 1995). Death rates fell sharply due to substantial progress in medical science, while birth rates, especially in the poorest areas of the planet, remained increasingly high (Miller, 1995). For many people, having more children became the symbol of healthier life (Cassis, 1994).

Modern communications and the sophisticated system of transportation have created better conditions for giving birth to and bringing up children (Cassis, 1994). As a result, with time, overpopulation gradually transformed from a distant perspective into reality. Like any other issue, overpopulation has good and bad sides. Surprisingly or not, overpopulation creates a challenge the society must meet in order to survive. In this situation, people actively work to develop solutions to the most urgent food supply problems (e. . , the development of genetically modified foods). Nevertheless, negative factors of overpopulation overweigh its positive sides and include the growing scarcity of resources, environmental pollution, the failure of traditional food supply chains, and the growing population-nutrition gap. Overpopulation and the Current Sustainability Solutions The growing scarcity of food resources leads governments and social groups to propose and implement sustainable solutions to the problem of overpopulation.

Current sustainable policies cover a limited range of instruments and do not resolve the existing overpopulation controversies. In the system of overpopulation solutions, family planning and birth control occupy the central place and are based on Malthus’s theory that “all biological populations have a potential for increase that exceeds the actual rate of increase, and the resources for the support of increase are limited” (Fellman, Getis & Getis, 2007, p. 125).

Indonesia was among the first to adopt a family planning program that established numerous village centers to distribute contraceptives and educate people about birth control (Pakenham, 2004). As a result, Indonesia was able to decrease its fertility rates by almost 40 percent (Pakenham, 2004). Other countries, including Thailand, Mexico, South Korea and Tunisia were able to decrease their birth rates; the dramatic decrease in birth rates ultimately led to a 33-percent increase in economic growth in East Asia (Pakenham, 2004).

Chinese one-child-per-family policies received a great deal of attention (Cassis, 2004). Economies like Japan apply to complex policies of economic growth, based on the belief that economic prosperity and lower fertility rates are closely connected (Cassis, 2004). These, however, are separate attempts to resolve separate issues in separate countries. Humanity never tried to develop a complex strategy to address the most complex elements of the overpopulation problem at once. 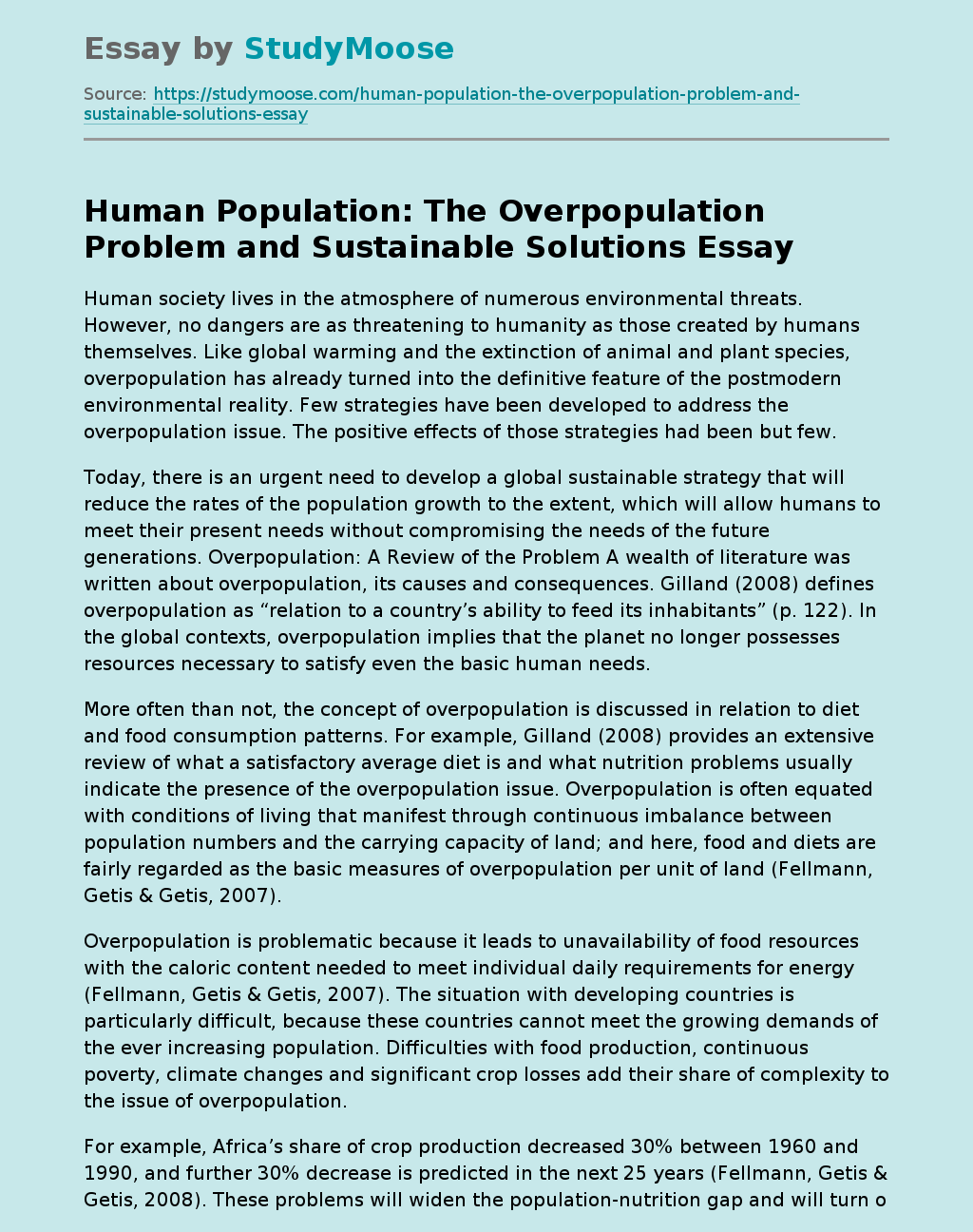