The main focus of this research report will be social media problems and their solutions. ‘Social media is a collection of online communication sites dedicated to community-based interaction and content sharing. Examples are; Facebook, Twitter, LinkedIn, etc.’ According to Rouse, M. (2019). Even though social media has a lot of advantages and benefits, it also has its major disadvantages. Throughout conducting this research report certain social media problems will be identified, explained, described and then prescribed solutions. Some people use social media for good, but some can use it to do the worst of things to other people and this is where the problem with social media begins.

Don't use plagiarized sources. Get your custom essay on
“ Social Media Problem And Solutions In Society Today ”
Get custom paper
NEW! smart matching with writer

Dangers Of Cybercrime And Bullying

In social media today cybercrime takes place more often than anticipated, and it continues to grow with new threats as time goes on. Cybercrime is when someone commits crime through social media / internet with the use of a computer, laptop or a smartphone, for example, the misuse of personal information (identity theft), spreading child pornography, etc.

‘Most of these cybercrimes are committed by individuals or small groups of individuals together. Large organised crime groups have also taken advantage of the internet. These criminals find new ways to commit crime and treat cybercrime like a business.’ According to Cybercrimes and criminals. (2019).

According to Magalla (2013:10), “The first cybercrime took place in 1820. This is true because computers did exist since 3500 BC in India, China and Japan. The modern computer began with the analytical engine of Charles Babbage. Banks were the first large scale computer uses.

Therefore, fraud in a computer scheme emerged.” A few of attack strategies used by cybercrime criminals are; Botnet, which are software robots that spread malware, Zombie computer, which is a hacked computer used to launch / spread malware, or Skimmers, which are devices that steal credit card information.

It is important to protect the important information and data that is present in a computer against all these various types of viruses and malwares and cyber security often helps with that. For example, Avast free antivirus is one application in which can be installed in a computer that will help in the prevention and protection against viruses that are trying to invade the computer. This application has different features such as scanning for viruses from websites, scanning devices that have been plugged into the computer such as memory sticks and smartphone devices, browser clean up, etc.

Cyberbullying can have a major impact on an individual. It can damage the person emotionally and physically. Victims of cyberbullying sometimes experience feelings of depression and loneliness, unhealthy eating disorders, anxiety, or low self-esteem which often leads to results such as suicide or the murdering of the bullies to end the suffering. According to Macariola, J. (2015), ‘There are different reason in to which individuals become cyber bullies. Usually bullies have some sort of insecurity about themselves, so in order to protect themselves and make themselves feel better and superior bullies resort to making others feel bad and miserable.’

Encouraging open communication with an individual that’s being bullied is important as they feel alone in this matter. Comfort and support is important as well for all challenges. Assuming that the matter of being bullied is a minor issue and simply ignoring it is a mistake. There are also child lines in South Africa that assist individuals who are being bullied (child line – 08000 55 555). ‘Here are some guidance tips to help stop bullying; know that it is not your fault, do not respond or retaliate, save the evidence in case things escalate, reach out for help, and protect your online accounts.’ According to ConnectSafely (2018).

Health Issues Due To Social Media

When being on social media it usually includes staring at a screen of either a smartphone, laptop or a computer and when doing so for some time it tends to have some side effects to a person’s eyesight, which is called digital eye strain, it is also caused by not having enough rest periods. According to Cashin-Garbutt, A. (2019), ‘People who frequently look at computers for more than three hours a day my experience some symptoms such as; Eye discomfort, Headaches, blurred vision, and difficulty focusing.’

Other than having digital eye strain there are many other health issues which are cause by social media. ‘Addiction to social media which an individual may experience side effects such as withdrawal from social interaction or lack of sleep, and Stress which can be experienced through arguing with people. It can also have some physical effects such as; Carpal tunnel syndrome which can affect the individual’s hands and wrists, or eye problems which is the digital eye strain from starring at the screen too long.’ According to DiRenzo, A. (2016). People can also develop a serious addiction to social media, they end up spending more time on the internet and not in the real world interacting face to face with people. This can also lead to them having less time interacting with their families, having lack of focus and losing precious time.

There are a few tips in which can help reduce the risk of having health issues due to social media. Firstly, adjusting your screen to a position in relation to your eyes. Secondly, balancing the level of the brightness of your screen to match the light in your room and the light your eyes are comfortable with. Thirdly, the dust on the screen can cause poor clear vision of the screen which can lead to eye irritation, so cleaning the screen regularly would be advisable. And finally, taking time to blink, it may seem obvious but sometimes starring at the screen the eyes stop blinking and start glaring at the screen. Make sure you take breaks every 20 minutes to look at other objects.

According to DiRenzo, A. (2016), ‘When used in moderation, social media can have a non-negative effect on your health. Here are some general tips;

In today’s social media it’s hard to tell between what’s real, what’s not and who’s who. It is easy for a person to identify themselves as anyone they want to be, whether its lying about their gender, lying about their name, or lying about their identity entirely, which is called a fake profile. A fake identity is when one person uses another person’s personal information and pretends to be them or the person creates an entirely brand new identity and portrays to be someone they not. ‘There are a number of reasons why one can create a fake identity or fake profile on social media. Some people do it to hack people, stalk individuals or to hard others, while some other people do it for fun and not trying to annoy anyone in the process.’ According to Chaturvedi, J. (2013).

According to Wallace, B. (2018), ‘About 3% of Facebook profiles, 15% of Twitter profiles, and an estimated 8% of Instagram profiles are fakes. From all three social media platforms combined there are 142 million fake profiles on the internet in total, and that is part of the reason why people can fall for a fake identity.’ Other reasons why people fall for fake profiles is that some people do believe that is a person behind a profile. Some believe that the profile belongs to an individual they knew, either a family member or a friend. And with every connection the fake profile does it seems more realistic and legitimate.

Some fake identities online are created by individuals who are wanting to kidnap people. They will firstly get to know the person online and make acquaintances with them then request to meet them in person afterwards. Which is making it easy to kidnap and traffic people nowadays. Meeting up with an anonymous person from online is a risk.

According to Online Profile Pros. (2017), ‘As time goes it’s becoming more and more difficult to spot a fake identity / profile on social media. It is told that 60% of all online profiles are either inactive or faked. It is not easy to spot between fake online profiles from reals one but here are some red flags that can indicate a fake profile.

Other ways to protect yourself from falling for fake identity and scams is that be aware that scams exist even though that may seem obvious it lowers the risks of being scammed by a fake identity. Keep your personal information to yourself and do not distribute it to anyone and be careful of the requests of money and personal details from the fake profile. These simple tips will lower the risk of any individual falling for a fake identity and being scammed.

In conclusion even though social media’s main creation was to benefit society and help society communicate better with each other it has it major disadvantages / problems. As indicated above social media can cause harm to a person’s health if the individual is not taking care of themselves and if the individual is not taking proper precautions and guidance when looking at a screen while on social media. It can have the dangers of cybercrime and fake identities which mainly lead to kidnapping and robbery. It can also lead to a person having less time to focus on real interactions and real face to face conversations with their families and friends and wasting time seeking validation and ‘true friendship’ online with strangers. Even though social media has so many dangers and problems there are tips and guides into which one can follow and can help limit the risks of these problems, such as; getting proper security on their computers, phones and laptops, being able to tell the difference between fake identities and real ones, and protecting personal information against strangers. By following tips and guides any individual can use social media with less problems. 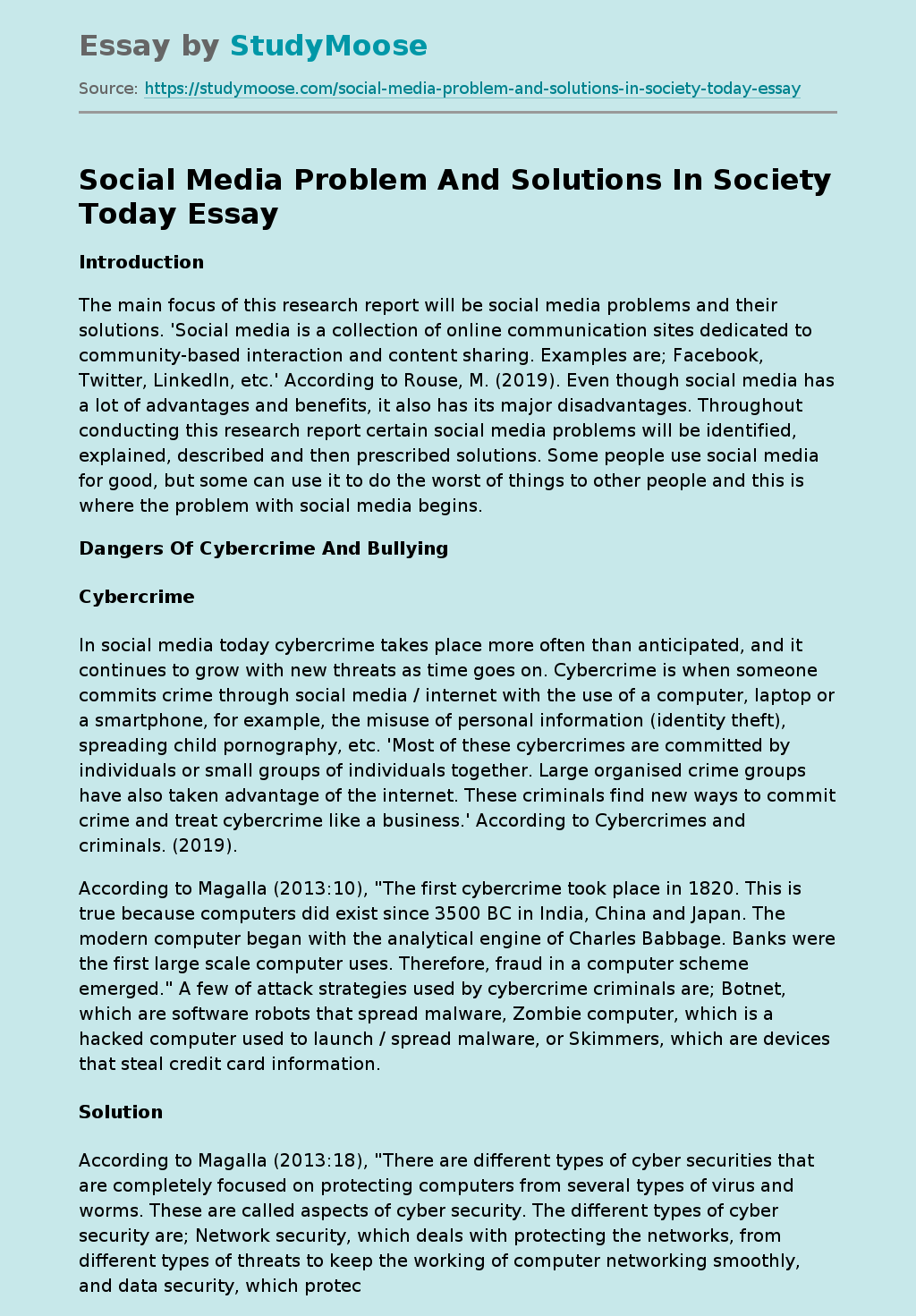