With many new advances in health and technology, the world has experienced a growth in population over the last decades. While the world’s population has been increasing, the environment had also been degrading. Frequent natural disasters and climate change have been happening around the world. Many people link such happenings to the constant population growth. The environmental problems have caused governments in the many overpopulated countries to propose and pass many laws that would stop their population from growing; most of these laws dealing with family planning.

Turn in your highest-quality paper
Get a qualified writer to help you with
“ Overpopulation or Overconsumption ”
Get high-quality paper
NEW! AI matching with writer

Many of these laws and policies have been effective in stopping their population from growing, but the environmental problems are still occurring. While most people focus on stopping the exponential growth of the world’s populations they overlook the issue of overconsumption, and the effects of the large corporation on the environment. One common example of a country that tried to control their populations is China. They have introduced the one-child policy, their family planning policy which restricts married families to only have one child with the exception of rural couples, ethnic minorities and parents with only one sibling, in 1978.

The policy had been a success since it has been devised; until 2011, it has stopped 400 million births from happening. The one-child policy had also prevented some environmental problems in China. The population control has kept sulphur dioxide emissions by 17. 6%, and the main sources of water pollution by 30. 8%, according to Liu Shaojie vice director of the Population Commission in Henan, the most environmentally unstable province in China (Jonathan).

The Chinese policy’s success can’t be used as evidence that overpopulation is the sole cause of the world’s environmental ills.

As stated by Fred Pearce, a regular writer for The Guardian and the environment and development consultant for the New Scientist, the carbon dioxide emissions in the poorest countries around the world are only 7% of the global total, whereas the wealthiest 7% of the planet emits 50% of carbon dioxide(Population Overload? 1). This shows that the overpopulated part of the world (the poorer countries) is not causing much damage to the environment as the rich ones are causing.

The cause of such large amount of carbon dioxide has been due to the many industries, and factories in the rich countries. The rich countries of the world also consume a lot of resources, even with them not having as much people compared to the poorer countries of the world. Americans only make up 5% of the world’s population, yet they consume 20% of its resources (Population Overload? ). Overconsumption is usually overlooked in the United States; many economists encourage it, claiming that it stimulates the economies of the country (Elrichs). Economists encourage people to buy more things.

Even when the unemployment rate was growing in the United States, economists were still encouraging people to go out and buy things( through the media and many other advertising means) (Elrichs). The latter caused the country to fall into depression. It has become the lifestyles of Americans to want the best for themselves and by wanting the best they have to over consume. As the demands for certain products go high, the more efforts the country has to put into supplying those things. Factories have to make a lot of products, which causes the levels of pollution to rise continuously.

Most of these factories that produce a lot of pollution are controlled by the major corporations. Most of these major corporations care mostly about profit; they would tend to neglect the environmental problems that are caused by overconsumption knowing that it is one of their main ways of gaining profit. In a recent report for the United Nation, the British consulting firm Trucost found that just 3000 corporations cause 2. 15 trillion dollars in environmental damage, and only 6 countries have that GDP (market value of the goods produced in a country) (Angus 2).

Another example that Angus give, is the United States military. Controlled by major corporations, the U. S military is the largest user of petroleum in the world. The military operations around the world produce more waste than five of the world’s major companies, and more than 10% of all hazardous waste sites are on military bases (2). The poorer countries also suffer from the injustices of the major corporation. Some examples include the coal mining towns in rural Appalachia, indigenous communities of the arctic and subarctic, the oil fields of Nigeria, and the oil refineries of the Gulf Coast (Barajas-Roman, Hartmann 4).

Most of the latter examples have very little to do with population growth it’s mostly corporate greed. Overpopulation is really a developing into a growing concern, but it is not the main cause of our environmental problems. The poorer countries, which are the most populated don’t consume as much resources as the economic powers of the world. That overconsumption causes production to increase in factories, thus causing more pollution. Major corporations also play a major part in the detriment of the environment. 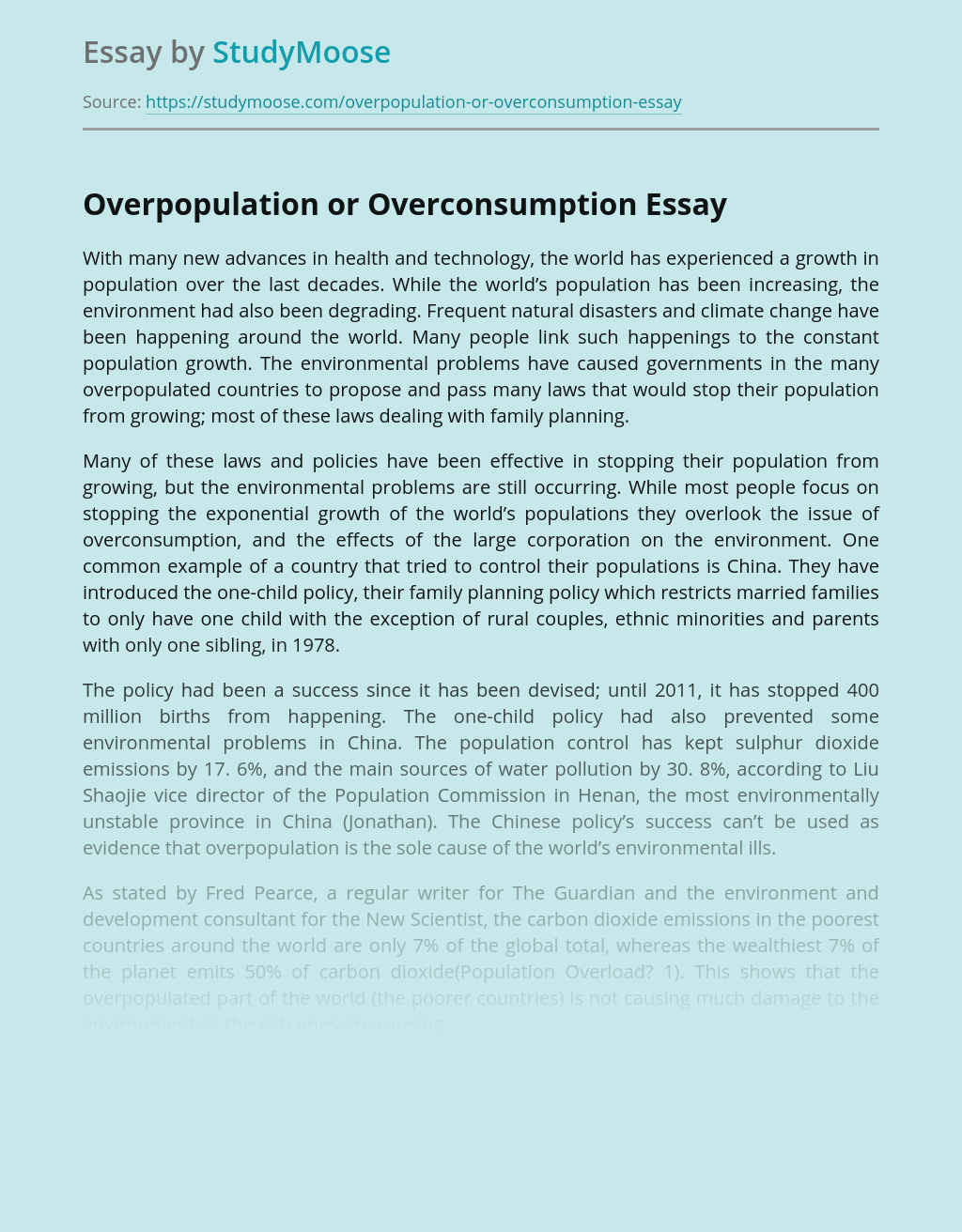 Turn in your highest-quality paper
Get a qualified writer to help you with
“ Overpopulation or Overconsumption ”
Get high-quality paper
Helping students since 2015
Stay Safe, Stay Original