Is Overpopulation the Cause of Poverty?

There are many people who argue that the biggest problem in South Asia is overpopulation. This assertion has been repeated so often over the years that it has almost become common wisdom. Its adherents include a lot of well-educated individuals and one often hears the argument from government officials as an explanation for the inability to reduce poverty. There are a number of problems with this simple proposition. First of all, population is not a very useful measure by itself simply because it fails to account for the size of the land in which the population resides.

Don't use plagiarized sources. Get your custom essay on
“ Is Overpopulation the Cause of Poverty? ”
Get custom paper
NEW! smart matching with writer

Some countries like Russia have a very large area while others like Singapore have a very small one. Therefore the appropriate indicator to use in order to make valid comparisons is population density (i. e. , population per unit of land area). Using this indicator one would find, for example, that Belgium has a very high population density, Pakistan is in the middle, and Somalia ranks very low.

Of these countries, Belgium is not the one with the most difficulties. Nor does Somalia have the fewest. Just looking at population or population density tells us very little about a society’s problems.

Within individual countries we can find similar situations. Take Pakistan, for example. Balochistan has the lowest population density amongst the provinces. But Balochistan is by no means better off than the other provinces because of its low population and population density. This raises an interesting issue for those who subscribe to the overpopulation hypothesis.

Would Balochistan, with all its natural resources and its small population, be much better off if it were a sovereign country by itself?

I am sure the believers of the hypothesis would quickly find many arguments to refute the implication of their own assertion. The question would force them to abandon the simple answer and start thinking of the many other factors that actually influence economic and social development. Consider another interesting situation. When Bangladesh became independent, what remained of Pakistan lost more than half its population and the small part of its land area that was widely believed to have been a drain on the resources of West Pakistan.

Did the significant reduction in population and the removal of the resource drain trigger an immediate economic boom in Pakistan? And if not, why not? The simple relationship of population and development fails to provide an answer to the question. The second point to consider is that even population density is an incomplete measure because all the land in a country is not equally valuable when it comes to supporting its population. Deserts and mountains are of little value in this regard. It is the habitable and cultivable land that matters.

Japan and China both have relatively small endowments of such land while the latter has the largest population in the world. Yet Japan, despite its relative lack of natural resources, is amongst the richest countries in the world. And China has been recording very high economic growth rates for many years lifting millions of its people out of poverty. The simple proposition fails to explain much of what has been going on in these two countries either. As a matter of fact, one could quite plausibly argue that poverty is not due to overpopulation.

Rather, overpopulation could well be a result of poverty. Empirical evidence shows clearly that as households become economically better off the average family size tends to decrease. In fact, a larger population can even be considered an advantage. Many European countries are actively encouraging their citizens to increase the size of their families. So is Singapore — a very small and densely populated island. Global firms are keen to invest in highly populated countries like India and China because of their large consumer markets.

The issue is obviously not as simple as it seems. The point of these stark and somewhat extreme examples is to stress the need to abandon the simple explanation for the problem of poverty in South Asia. Only then would we be able to debate the real causes and reasons for the slow pace of development. The belief in overpopulation as the cause of poverty encourages a sense of helplessness because there is no obvious solution. Even if we accept that South Asia is overpopulated what are we going to do with all the people who are already here?

We need to think of people as a source of strength and not as a problem. The sensible strategy would be to invest in people to make then as productive as possible in order to promote economic development and reduce poverty.

Illiteracy means not being able to read and write. A person who has not received elementary education is illiterate. Literacy as we all know is essential for the growth and progress of individual as well as society. There are countries where literacy rate is hundred per cent.

But most of the developing and under developed countries are struggling to educate the masses the recent survey has indicated that in Pakistan literacy rate is 38. 9 per cent, the male and female literacy rate stands at 50 and 27 per cent. This situation is not satisfactory at all. Pakistan is lagging behind many other countries of the region. There are two kinds of illiterates’ illiterate children and illiterate adults. Among the main causes of illiteracy the first is poverty. People living in slums and villages cannot send their children to school while they starve for a morsel.

Lack of awareness of the significance of education makes many people disinterested in any such comparing. Lake of educational facilities is also a major factor. In rural areas man schools are without proper building and furniture etc. sometimes school is there but there is no teacher. Lack of resources on the part government is a major obstruction in the propagation of primary education. Govt. spends less money on education as compared to other developing countries. Some religious people do not allow the education of their children particularly girls except religious education.

Is Overpopulation the Cause of Poverty?. (2020, Jun 02). Retrieved from https://studymoose.com/overpopulation-cause-poverty-new-essay 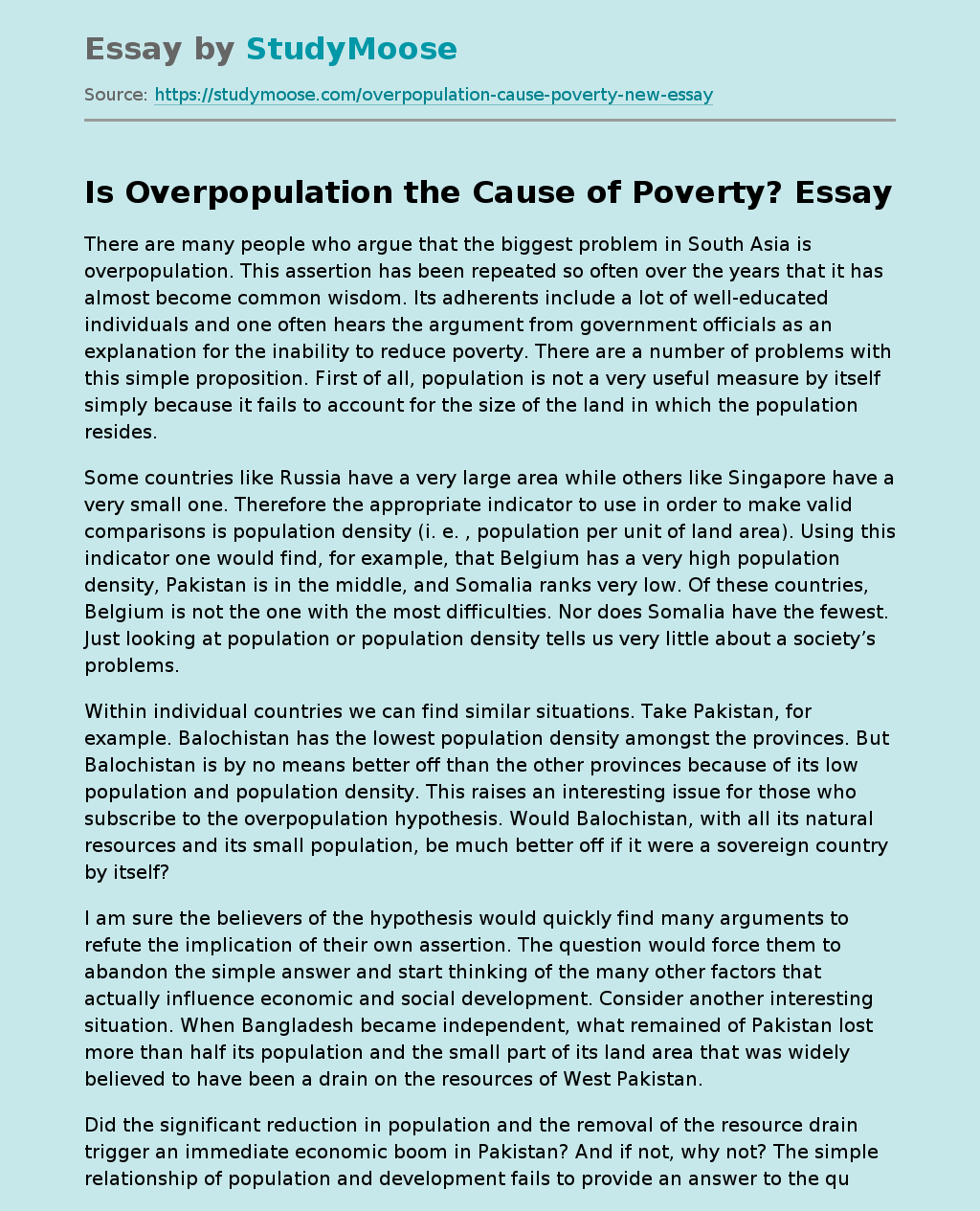