Analysis of Grendel’s Character in Beowulf

When Beowulf is retold from Grendel’s point of view many different assumptions can be made when evaluating and comparing Grendel to Beowulf. The sympathy, which Grendel withholds, represents his innocence and how he isn’t just a “monster.” Due to this reason, readers feel very sympathetic towards Grendel compared to Beowulf due to the fact that he is incoherent to the many actions humans perform. Readers who have read Beowulf notice the different in Grendel’s character from Beowulf to Grendel due to him being expressed in two completely different ways.

Don't use plagiarized sources. Get your custom essay on
“ Analysis of Grendel’s Character in Beowulf ”
Get custom paper
NEW! smart matching with writer

The various ways sympathy is represented in Grendel include the reason of retelling Beowulf from Grendel’s point of view, Grendel’s character, and the basic human condition. Various reasons are used by Gardner to represent the retold story from Grendel’s point of view. Gardner wanted to help the reader visualize what was going on in Grendel’s head and how he viewed human nature as vile and bloodthirsty, which is the same way we viewed Grendel from “Beowulf”.

Good vs. Evil was represented, but not to kill Grendel, but to sympathize his innocence and how he just wanted to help. For example, Grendel wanted to help his people and the people he looked upon, but he ended doing the opposite.

Gardner does effectively shows how two different standpoints can view the “same things” as completely opposite. Grendel’s character is characterized as peaceful and confused. Grendel wants to know why humans kill animals and each other, he doesn’t understand the reason we perform various actions such as hunting and drinking.

The ways we are viewed are as “creatures” that perform devious deeds for no reason at all. The reason Gardner states all this is for us to view Grendel as a child with no knowledge; he is just living his life by his conscious. By doing so, Grendel comes face to face with Beowulf. In Beowulf Grendel obtains all the expectations of a “monster”, but in Grendel he is the complete opposite of a “monster”.

Grendel knows that people fear him, but he also realizes that people waste their time and make pointless choices. The mead hall for example is a place Grendel always attacks due to it pointing out the stupidity of mankind. He states that he doesn’t like the taste of humans; he just hates the actions, which they perform. In conclusion, Grendel is a monster which readers symphonize. Grendel in Beowulf creates completely different assumptions than the ones he creates in Beowulf. Readers feel bad for Grendel when Beowulf at the end of the book kills him when he feels confident pertaining to a victory, but unfortunately he isn’t victorious. The poem vs. the book shows readers how he is thought in the poem and how that Is different than the actual book.

Analysis of Grendel’s Character in Beowulf. (2016, May 14). Retrieved from https://studymoose.com/analysis-of-grendels-character-in-beowulf-essay 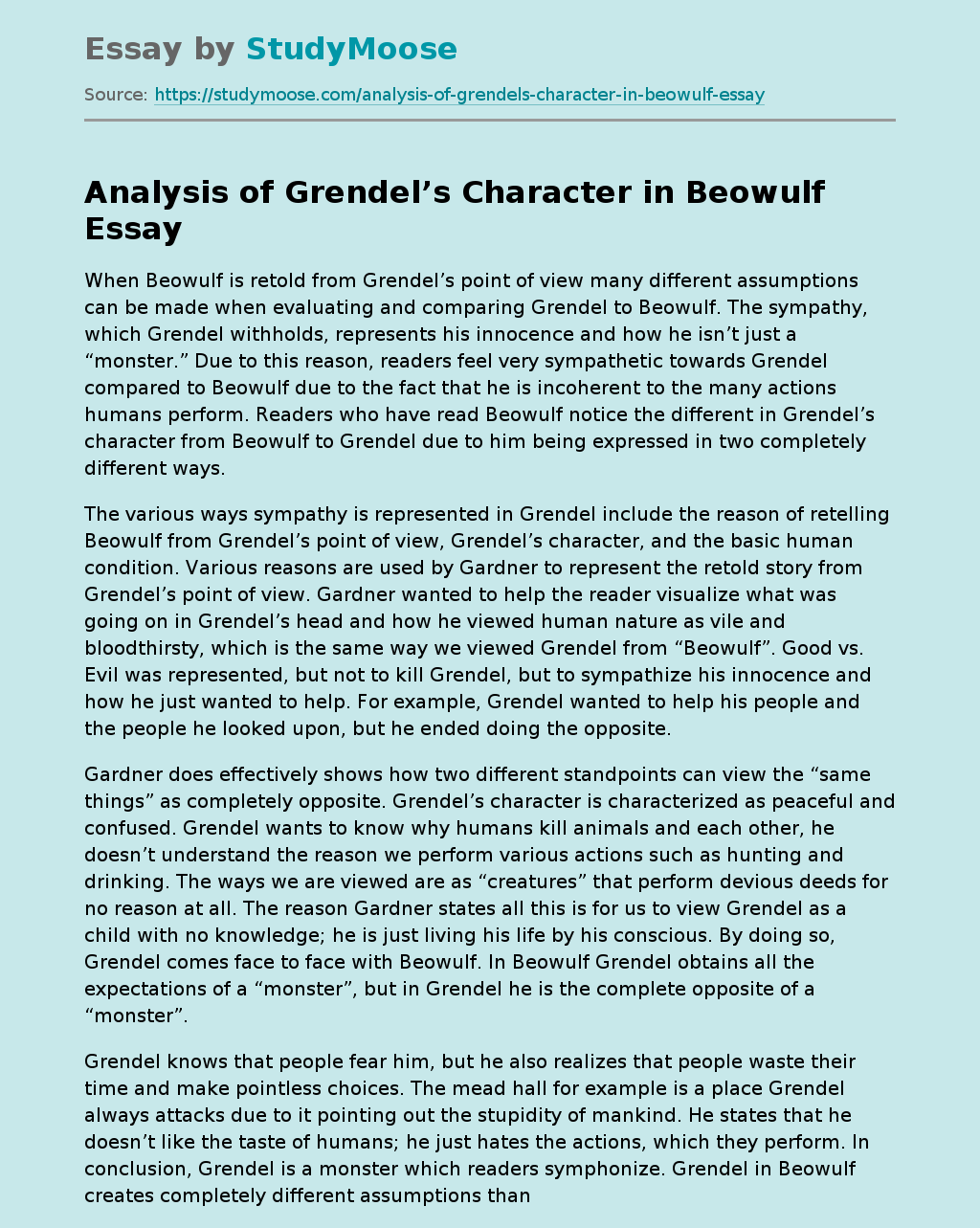