Grendal is an evil monster, or maybe that is what the poet wants his readers to think. The poet’s use of sensory images, emotive words, and kennings to paint a picture that Grendal is a monster, but this is only an illusion.

To begin with, tone helps the poet display Grendal as a monster, not a human. The first example is from lines 407-8, “He strode quickly across the inlaid/floor, snarling and fierce.” This quote shows Grendal making snarling noises, only those a monster would make.

Don't use plagiarized sources. Get your custom essay on
“ Grendel Analysis ”
Get custom paper
NEW! smart matching with writer

This only just establishes the illusion. The second example is from line 428, “Clutched at Beowulf with his claws.” In this quote, Grendal is shown to have claws, something a human does not have, further establishing the monster persona for Gendel. The last example is from line 445, “The infamous killer fought for his freedom.” This is the illusion breaker. This helps us lean toward the fact that Grendel is, in fact, a human. Grendel is fighting for his life, out of fear.

If he were truly a monster, he would not feel the need to run from Beowulf.

Secondly, the poet’s use of emotive words help us feel the murderous and twisted feelings of Grendel. The following quote is from line 394, “Grendel came, hoping to kill.” Grendel showed up to Herot with the intention to kill as many people as possible. He has to care as to how or why, he just wants to quench his lust for blood. Following, this next example comes from line 412-3, “And his heart laughed, he relished the sight/Intended to tear the life from those bodies”.

Grendel enjoyed his killings. He would go out of his way to murder the people of Herot, and relish every moment of it, a very monstrous quality. As a final point, line 435 reads, “His mind was flooded with fear.” This is another humanly quality. A monster would not feel fear. This line helps in the recognition of Grendel as a human made into a monster.

To conclude with, kennings are the biggest tool used by the poet to establish the illusion of a monster. First of all, the kenning in line 432 is “…guardian of crime.” This shows that Grendel is aligned with evil, protecting evil from the glorious grasps of good. Secondly, line 432 has a second kenning, “Shepherd of evil…” This line also contributes to the evil in Grendel. Describing him as dark and evil. It also describes him as a shepherd. Grendel will be the one to gather the evil, care for it, nurture it, like a shepherd would his sheep. To conclude, line 470’s kenning reads “Hell’s captive” which implies Grendel is a creature from Hell. It is said that all monster’s call from Hell, so this adds to the false pretense of Grendel being a monster. What breaks it is the fact that he is a descendant of Cain, a man, so he cannot possibly be a monster.

In conclusion, the poet’s use of kennings, tone, and emotions helps us see Grendel as a monster. Any person can be considered a monster, but they are still human. Monsters are not always clad with scary looks and ferocious claws. Sometimes a regular human can be the worst monster of them all. 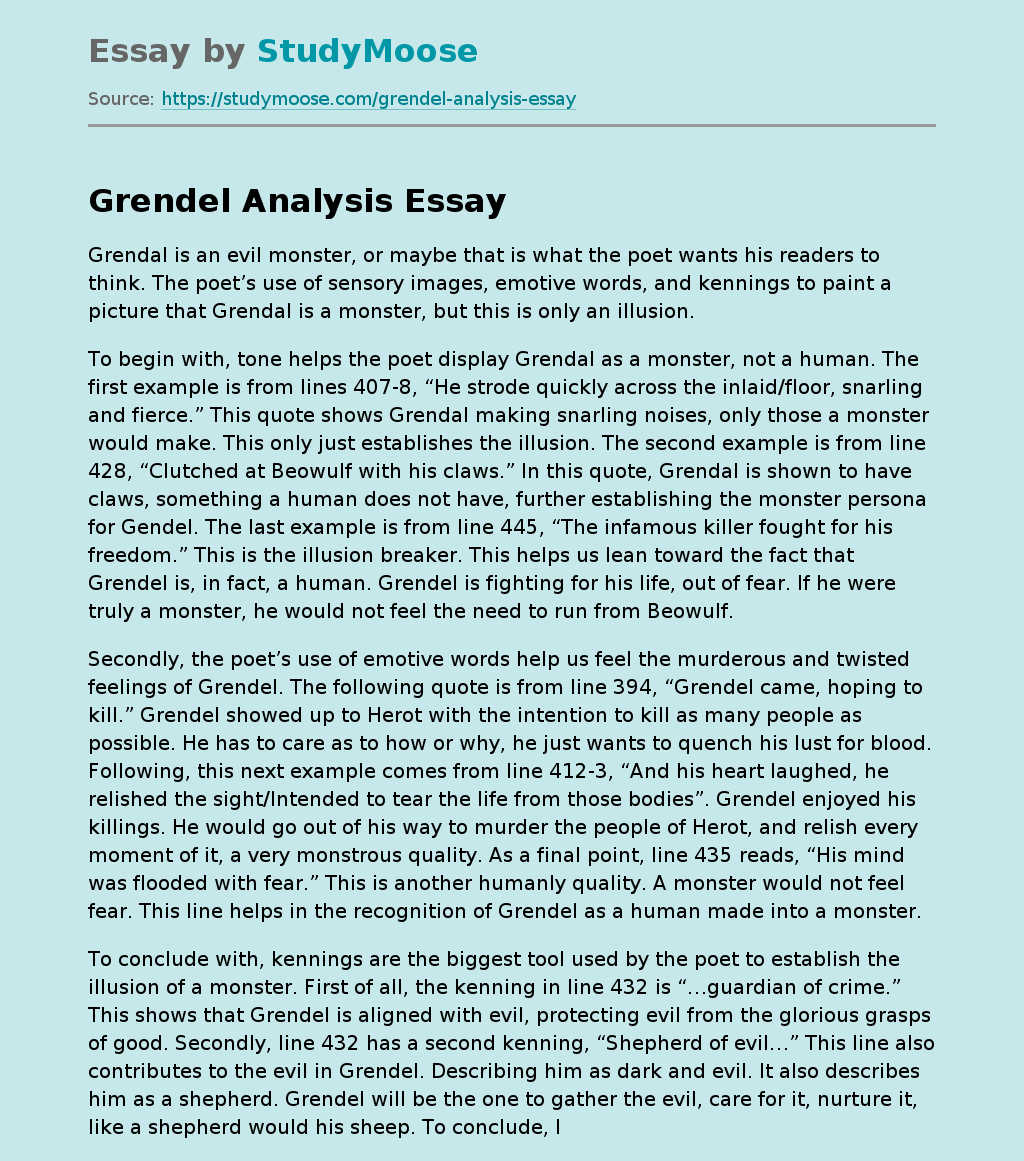