1. Pink’s Stupid Girls created 2006 2. Narrative or storyline; Young girl is sitting on couch, watching TV which shows a range of depictions of women. The ‘good’ and ‘bad’ angels hover over her shoulders. The images include women as ditzy, carrying little dogs, car-washing in minimal clothing, as the president, playing football. 3. The central discourses are stereotypes regarding women and the choices that women make. The entire video clip presents the range of ways women can be in our society.

For example, they can be insecure about their appearance, with scenes showing them getting spray-tans, having cosmetic surgery and the bulimic girl in the toilets.

Don't use plagiarized sources. Get your custom essay on
“ Analysis of Pink’s Stupid Girls ”
Get custom paper
NEW! smart matching with writer

Almost in contrast, the women are shown as being defined by their sexuality and using their appearance to gain approval, such as in the dancing, bedroom and the car-washing scenes. This idea is also evident in the gym and bowling alley skits. There are also images of women being strong and independent, especially in the president scenario and the final scene.

The central discourse challenges many of the existing stereotypes which define women by their appearance, rather than by the quality of their contributions to society. For example, in the opening scene, a young girl is depicted sitting on a couch watching television. As she changes channels, different representations of women are shown. The girl is holding a Barbie doll and handbag, representing the discourse of women as judged by their appearance and fashion-conscious. However, she is wearing a football jersey which represents a different discourse of women as sportswomen and perhaps being able to match the boys.

In another example, in the car-washing scene, the girl is wearing very minimal clothing, sliding all over the car in the suds, projecting her breasts in a bikini top, and appearing to be particularly clumsy. Her movements are quite suggestively sexual, and in fact many of her ‘poses’ replicate those in the bedroom scene, so the message is about a woman being an object of sexual gratification. This depiction of women is quite downgrading. Overall the representation of young women is negative, with the positive versions presented as the preferred, but not common, discourse. A positive representation of women is in the president scene.

The lyrics ask ‘what happened to the dream of a girl president’, and the images suggest a woman who is intelligent, strong and powerful. This is achieved through a range of visual techniques: the use of costume – a jacket and glasses, camera angle – from below to emphasise status, props – the USA flag, portrait in background, and the lectern. The action of striking a fist on the lectern also emphasises the confidence of the character, in direct contrast to other scenes which show the woman as insecure, comparing herself to other girls and trying to attract the attention of men. . The video clip uses a range of technical aspects to help convey the overall message.

For example, very conventional codes are used in the opening scene, where the angel is depicted in white and the devil in black and red. The connotation of white is of purity and innocence, whereas the connotations often associated with black and red are negative. Fire is suggestive of hell and the smoke or cloud around the white angel suggests heaven. The message is thus a very heavy laden one, making one view of women good and the other bad. 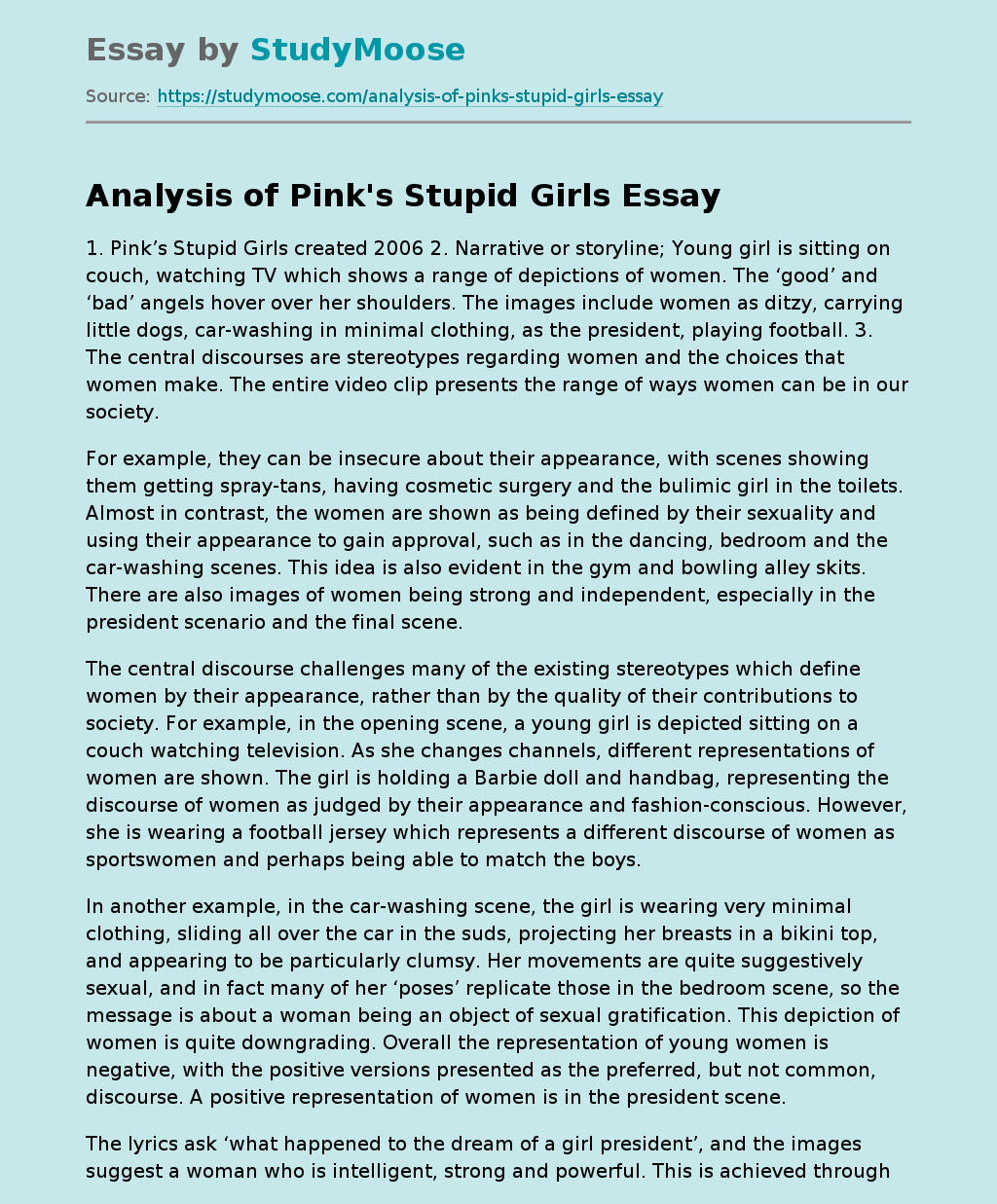