Fairy Tales and a Dose of Reality

Today’s media plays a massive role in the establishment of a fantasy marriage that was first embodied in the classic tale of Cinderella. Many people are persuaded into believing that these finely crafted stories occur everyday and are very much achievable. Catherine Orenstein illustrates this in her essay “Fairy Tales and a Dose of Reality”. Orenstein relates the connection of many people’s fantasies and ambitions of perfect marriages and relationships with the success of Hollywood’s own interpretations of Prince Charmings and Cinderellas.

Don't use plagiarized sources.
Get Your Custom Essay on Fairy Tales and a Dose of Reality Just from $13,9/Page

However, the interpretations were not based off of pure fiction. She points out the popular T.V. series “The Bachelorette” is a satire of the entire Cinderella Story and draws many people’s attention because this is what so many of them crave. Many people however do not realize that the actual fairy tales themselves from the late 17th centuries are not at all about cliche happy endings and romance.

These tales incorporate harsh truths that exist in human nature such as jealousy, greed, lying and cheating.

Orenstein uses these examples to awaken people about how much are expectations and desires of romance and marriage have been manipulated and twisted over the past three hundred years into something almost unimaginable and far from reality. She puts to rest one of the most common fairy tales Cinderella by explaining how one of the original authors, Perrault, based his story off of typical aristocratic marriages in the 17th century and not from some make-believe fantasy that he wanted to entice his readers with. Orenstein closes the essay by bringing in the true history of the wedding. Weddings weren’t evoked by undying lust and erotic love for a partner, but rather they were established by the parents of the two families often times to settle disagreements or to spread the wealth by joining themselves together.

Fairy Tales and a Dose of Reality. (2016, Jun 11). Retrieved from https://studymoose.com/fairy-tales-and-a-dose-of-reality-essay 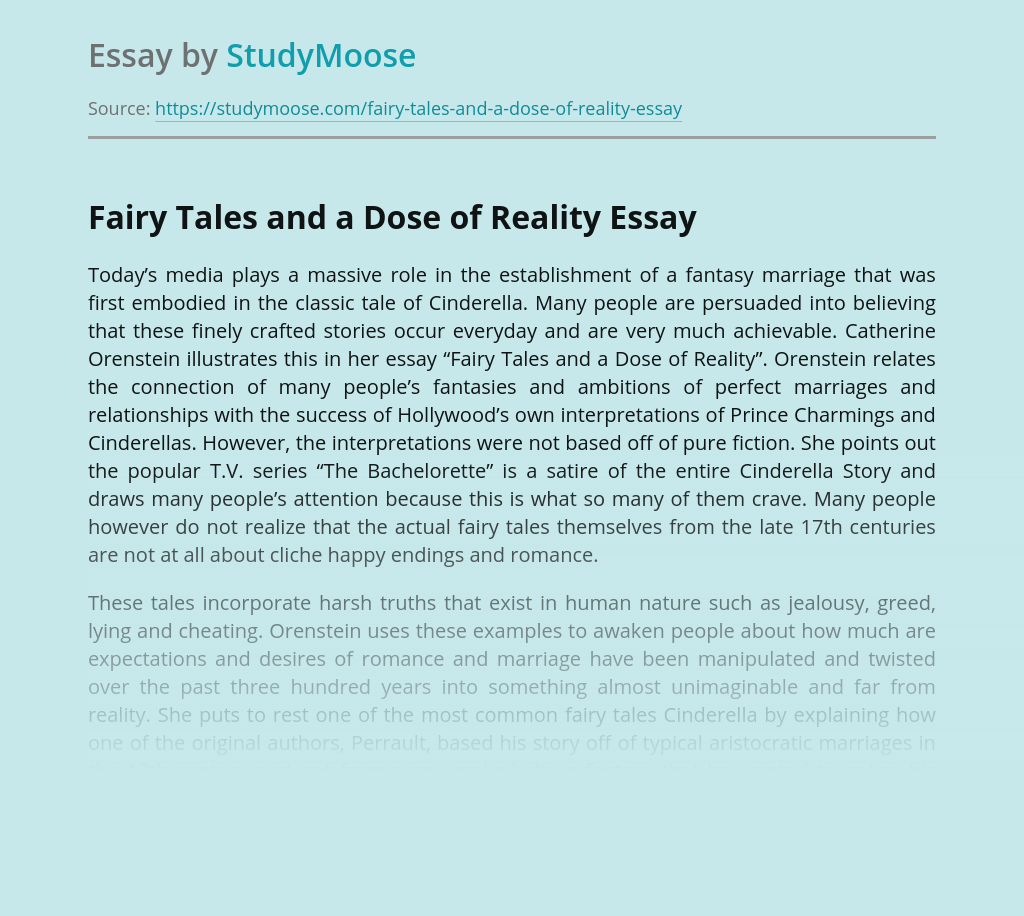 Pastoral poetry is defined as poetry professing to portray the innocence of shepherd life, according to a specific literary convention. They range from love lyrics to lengthy dramatic works and elaborate elegies. Christopher Marlowe is considered to be the first great English dramatist before Shakespeare. He wrote the poem “The Passionate Shepherd to His Love”...

View sample
Get Essay
Love Is All About Sacrifices

Love encourages people to sacrifice important things in their lives for others. Love can destroy or improve ones’ life. It once happen to a little country girl in the early days. Love totally changed her life both destroying it and improving it. This girl’s name was Kat and she was the mayor’s daughter who was...

View sample
Representation of Love and Marriage in Pride and Prejudice

Although love is considered significant in the world we live in now, it was not the case in the 18th century- Austen’s time. As time progressed, so did education, fashion styles, medical practises and most importantly social constructs and values. Love and marriage in Austen’s century, though it had some similarities, it was considerably different....

Passion is a distinct characteristic that not every person has the opportunity to experience. When one is said to have passion, that means that this person is driven and full of enthusiasm. Passion can be expressed in many different ways, and in many different situations. The dictionary has several definitions for the word “passion.” Passion...