In their attempts to be one with all the others, they were handed enemies with more hatred they can handle. Judged by their physical appearances, Grendel from Beowulf and Frankenstein from Mary Shelley’s Frankenstein are victims of this mistreatment. This dilemma of assuming one’s persona based on their appearances is created by society itself. Society’s assumptions make and break individuals, which can cause an eternal outlash towards society. Frankenstein and Grendel’s actions, although special in their own ways, lead back to the idea that society casts out individuals who don’t fit the norms without truly knowing the individual.

Don't use plagiarized sources. Get your custom essay on
“ Frankenstein and Grendel’s actions ”
Get custom paper
NEW! smart matching with writer

Abandonment is a recurring theme when discussing how or why a monster becomes hostile. In the case of Frankenstein, we have his creator Victor Frankenstein to blame for the creature’s unfriendly behavior. Unknown to many, Victor was tempted by science to further his fascination with the creation of the monster, regardless of how many of his peers disagreed.

Eager to finish his creation, Victor even says “·I had deprived myself of rest and health. I had desired it with an ardour that far exceeded moderation·” (Shelley, page 49). Victor was willing to put his own physical needs behind him to be able to finish what he had been yearning to complete. However, when his monster was brought to life, he described that “the beauty of the dream vanished, and breathless horror and disgust filled my heart.” (Shelley, page 50). His countless nights, endlessly working on his creation, ended up with something so horrific that went beyond his own comprehension.

Victor comes to the realization that the beauty of his dreams was really just a misperception he had failed to acknowledge.

Victor’s inability to accept the monster causes him to abandon Frankenstein. Symbolically, Frankenstein represents a newborn child, brought into this world and now waiting to learn how to interact with others. Frankenstein treks to find a way to stay alive, discovering fires and huts that he soon begins to understand will help him. When scouring for food, he sees other individuals and his curiosity leads him to try to communicate with them. Upon confrontation, their reaction to him is one that “sets the stage” to the rest of his life. Every person who crossed his path ran away in fear, as his appearance struck them as menacing. When he took a glimpse of himself in the waters reflection, he understood that it wasn’t his demeanor that was the issue; rather, it was his physical appearance. Upon learning this, he came to terms with the fact that “Increase of knowledge only discovered to me more clearly what a wretched outcast I was.” (Shelley, 125). His realization soon after causes him to start on a rampage of killing people victor is close to, to get back at him for creating him in such a horrid way. The sole thing he wanted to do was to form a relationship with somebody, yet his appearance made it impossible. This led him to his own solitude and later anger towards society, as he realizes that his compassion towards others made him more of an isolation from society.

In comparison to Grendel, there are some similarities and differences that can be made when identifying their issues in society. Grendel from the beginning is portrayed as a hideous monster who has no place in society. His isolation from society comes from his old lineage, as he is described as “·grim demon haunting the marches, marauding round the heath ·he had dwelt for a time in misery among the banished monsters, Cain’s clan, whom the creator had outlawed and condemned as outcasts.” (Anonymous, 102-107). Being that he is cursed, he has no choice but to accept what he has been born into. The few individuals that Grendel associated with also turned out to be outcasts of society. Grendel tried many times to assimilate, as he knew that he could communicate with others, but his childhood experiences with other individuals and animals were displeasing to the point where it was better if he didn’t try. Being that everybody around him seemed to have eternal happiness, it frustrated and irritated him, as he’s been trying to integrate into a society that isn’t willing to accept him.

Grendel’s status in his society is the start of a revolution that results in many fatalities and emotional disturbance. Being that other individuals are not open to accepting him, Grendel’s fury and agitation against them causes him to react violently, specifically at the mead hall. The mead hall is a location where many of the town’s people come to eat and drink; a place known for pure happiness. Grendel specifically targets this place because of his goal to intervene in the bliss of others. Striking out one night, “he grabbed thirty men from their resting places and rushed to his lair· blundering back with butchered corpses.” (Anonymous, 123-125). His seclusion from society is what causes his actions of mass murder, as it was something he probably was refraining from doing but the feeling of being alone was something that would not stop haunting him.

Both monsters have been singled out by society due to their physical appearances, but it’s clear that their progression of violence was drastically different. Frankenstein had started off as a na?ve individual who was trying to get by in the world by doing what he felt was necessary for survival. He learned through the neglect and rejection of society that he would never be able to integrate with them because of how others mistreated him for his looks. On the other hand, Grendel was born into a cursed lineage, whose ancestors had been tormented since their birth. Grendel had started off his childhood with the fact that he would never be able to be with other humans in his society because of his “luck” of being cursed. Although the two monsters did have different upbringings, it doesn’t take away from the fact that both monsters were given no opportunities in being able to associate with others because their looks served society a justification in why they should be excluded. Society’s persecution of these individuals is what evidently caused its downfall, as Grendel and Frankenstein would have been less hostile if they had not been treated in the way they were.

Throughout the lives of both individuals, we see that they resort to killing people of their society due to rejection. Psychologically, this deems to be a dire issue many scholars have addressed. It is in human nature to want to have contact with other individuals, as it helps us form bonds with others, to allow us to live our lives at ease knowing we have somebody to rely on. When individuals lack this behavior, it becomes hard for them to come out of the habit of receding back from society. Thomas Scheff, a Professor of social psychology at the University of California, Santa Barbara, targets multiple ideas of isolation in society in “Social-Emotional Origins of Violence: A Theory of Multiple Killings”. He expresses his views of why social isolation can greatly harm an individual’s mental health and even cause mass murders because “Killers seem to be persons that are both extremely alienated and also have completely suppressed their experience of shame/embarrassment/humiliation.” (Scheff, 14). This idea can be coordinated to the actions of Grendel and Frankenstein. Although the two strategically killed in different ways, their intentions span back to the idea of being left out of society. This exclusion caused them to feel humiliated, thinking that their problem is themselves when in reality, it’s their society that has marginalized them. 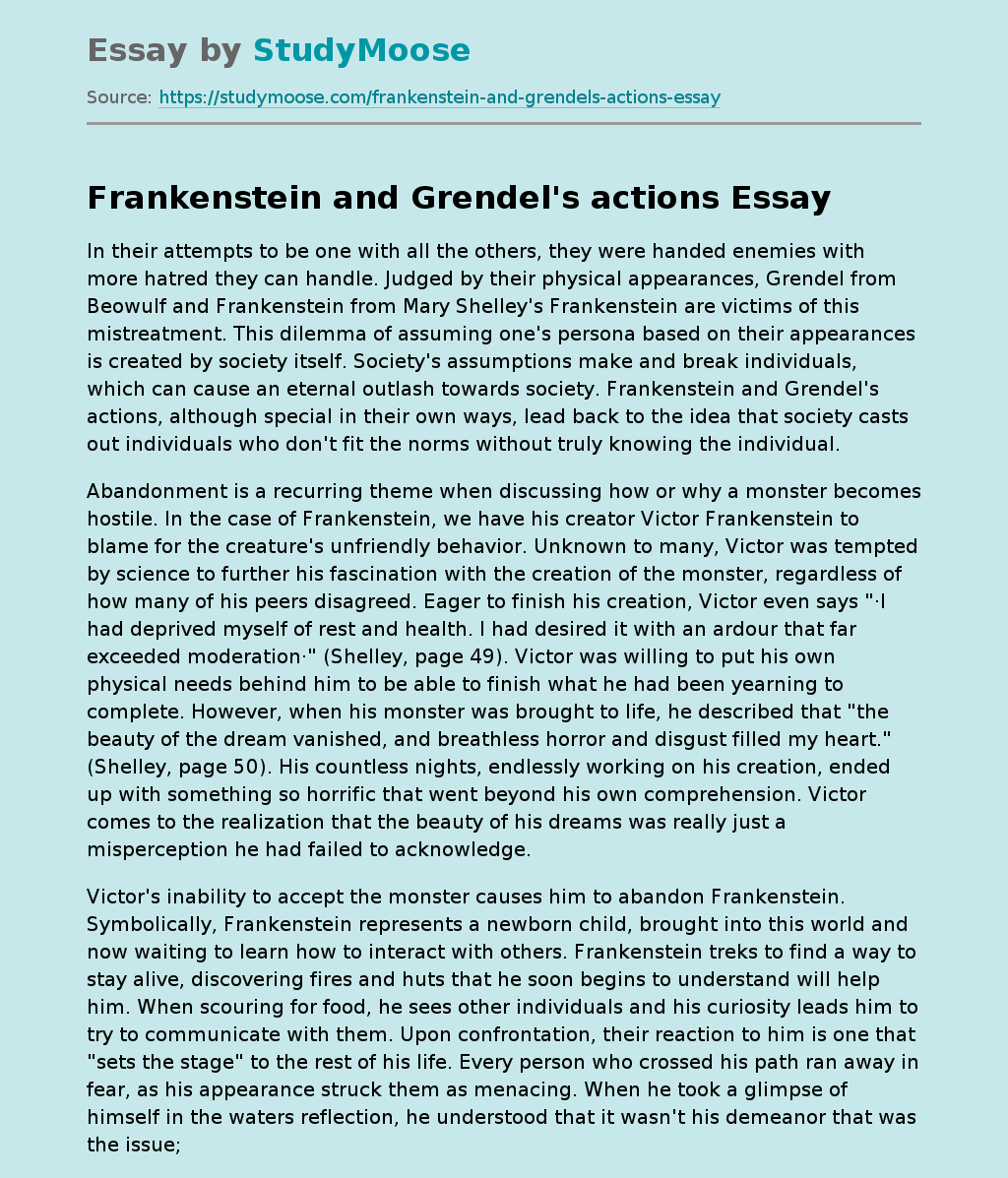