Overpopulation: Research Paper
Introduction
A. Noticing the situations of several people in poverty, otherwise those devastated by natural disasters, pollution, crimes, etc, we have come to conclude that the reason for this suffering is essentially the rapid growth of population, and thus, with this mindset, we decided to uproot the cause further so as to be able to contrast it.

B. The objectives of this research are: 1. To make people aware of the crisis of overpopulation 2. To lessen the number of people each year by making them aware of the effects

C. Definitions of terms: 1. overpopulation – condition of having a larger population than normal 2. human resources- people with ability and skill as the wealth of a nation 3. accommodate- to provide or supply for someone

4. contraceptives- drug, medicine, chemical agent or device that prevent impregnation 5. natural disasters – occurrences in nature that damage poverty and lives 6. pollution – “dirtying” or “killing” nature 7. [global] economic crisis- a depression; a state of unemployment and little or no trade and investment over a long period of time [in the world] 8.

poverty- a state of being poor, with no money or goods to support oneself 9. succumb- to give up; to give in to something far more superior 10. decline- a gradual decrease in strength and power [of a nation]; deterioration 11. chaos- a state of disorder, confusion disorganization of something; one in disarray 12. prosperity- a state of success or thriving; flourishing financially and socially

Presentation of Gathered Data
A. Interviews
1. Annabelle Tee
“For me, overpopulation is not good… because there will be more pollution and this will result to more natural disasters forming around the world.

As you can see right now, there have been many strong and deadly typhoons such as Ondoy entering the Philippines. Overpopulation, however, can result to some good things, such as our own country will progress…”

2. Richmond Tee
“Overpopulation is when there are more people than there should be. We must lessen the population of the Philippines (and the world) because we need to also put a stop to global warming. Since many people aren’t even aware of this yet, it is becoming more deadly. You see, there have been many natural disasters recently. I really think that overpopulation is bad… Even our family is overpopulated… *laughs*…”

3. Izen Lao
“For me, overpopulation will make our country bad because there are a lot of pollution. Mas grabe pa nga sa U.S. eh… *laughs* So thus… overpopulation is bad.”
4. Jan Adrian Chan
“Overpopulation, in my opinion, has two sides: the good and the bad. On the good side, with a greater population, we have more people to help in progression. More people equals more manpower, and manpower means a lot to a country. Even if there aren’t many job opportunities here in the Philippines, workers, or OFWs, they may go abroad to work and bring back some money to enrich our economy. On the other hand however, too many people can cause several things such as traffic congestions, crime, poverty, pollution, etc.”

5. Ninyo Vasquez
“Overpopulation can be good for the economy and at the same time bad because there are positive and negative effects. I think that’s it.
B. Internet Resources
“In a corner of the Northern cemetery, Venanjo Sison is standing on top of a coffin and taking a bath. Like many other of Manila’s residents, he is forced to live wherever he can. His home is made of wooden planks and scrap
pieces of plastic.”

For Manila, people simply are running out of space. Some live in home-made shacks in cemeteries, railroad tracks or even under bridges. Some even take residence in toxic garbage dumps just to get whatever food they can. A big percentage of the 11 million residents of Manila don’t even have clean water to drink, proper jobs and medicine or education. With such a large population, our resources cannot accommodate everyone anymore.

“Charito Esponilla’s dream is to give her children an education. That is what her neighbour with only two children has done. But the Esponilla family can’t afford to send their children to school. As it is, they have a hard time making ends meet and when the family runs out of money, they are forced to live on the charity of neighbours.

“’Our neighbours are so sweet,’ explains Charito Esponilla, while she washes children’s clothes in three large buckets of laundry. ‘Sometimes they give us a little rice, but a lot of the time they are short on food just like us. Then we have no other choice but to go hungry to bed. On those nights, it’s very hard to fall asleep. The children cry and wake me up all night long. But I don’t have anything to give them. What can I do?’

“Even though Charito Esponilla loves her seven children, she doesn’t want any more. Like most other Filipinos she doesn’t use contraceptives, and never has. She has considered the birth-control pill, but she doesn’t know much about them and is afraid of what they might do to her body.”

Lack of information is one of the main causes of Philippine overpopulation. Dr. Emily Bernardo, the leader of a family-planning unit at the public Jose Fabella Hospital in Manila, says, “The poorest social groups are incredibly ignorant. They don’t even know how a woman becomes pregnant. Some of them believe they are infertile while they are still breast-feeding their new-borns and others have never even heard of prevention or contraceptives. Others are still terrified of unknown side effects. That’s why women keep having more children, even though they neither want to nor have the economic means to provide for them.”

The Catholic Church, however, is against Dr. Emily Bernardo and the center for family planning. They are against abortion, sterilization and all other forms of contraception, and even sexual education. Women are encouraged instead to guess their egg cycle to prevent pregnancy. Being a very religious country, the Philippines and its government policies are still influenced heavily by the Church. A lot of governmental campaigning on prevention of pregnancy and sexual education never pushed through due to this influence.

Based on the conducted interviews and the process of surfing the Internet for the data we gathered in this research, we have come to see many points of view concerning the national —or rather worldwide— issue that continues to be an increasing problem in society. Overpopulation, as we now see it, has conflicting good and bad effects to the community. On the one hand, having a lot of people means more human resources, which would be very useful for further growth of national wealth. But on the other hand, the strain on economy and natural resources will be too much for the Philippines—and eventually the whole Earth—to handle, and the world may be left in poverty and chaos, and humans will be left to the mercy of what our once more peaceful world would become.

We do not only observe this, though. We can also see that both sides are only possibilities, meaning they may potentially not happen at all. It all depends on what we, as the people, do about our situation. Even if we have manpower to support the nation, the country could still fall into depression if this manpower is not used efficiently. If most Filipinos in their working age, if not all, do not have jobs and sit idly in the streets, definitely the economy would fall. If we take full advantage of the fact that we have a lot of human resources, we may just prosper. Even if we suffer from a global economic crisis, we could either succumb to the continual decline, or we could try to counteract the problem. After our endeavors, only time can tell what would happen after. How we handle our problems could mean all the difference between prosperity and chaos.

Insights Based on Gathered Data

Big Ideas:
 All things, no matter how good or bad they may seem, have both positive and negative sides to them.  It’s not so much as what problems we face as how we face them. 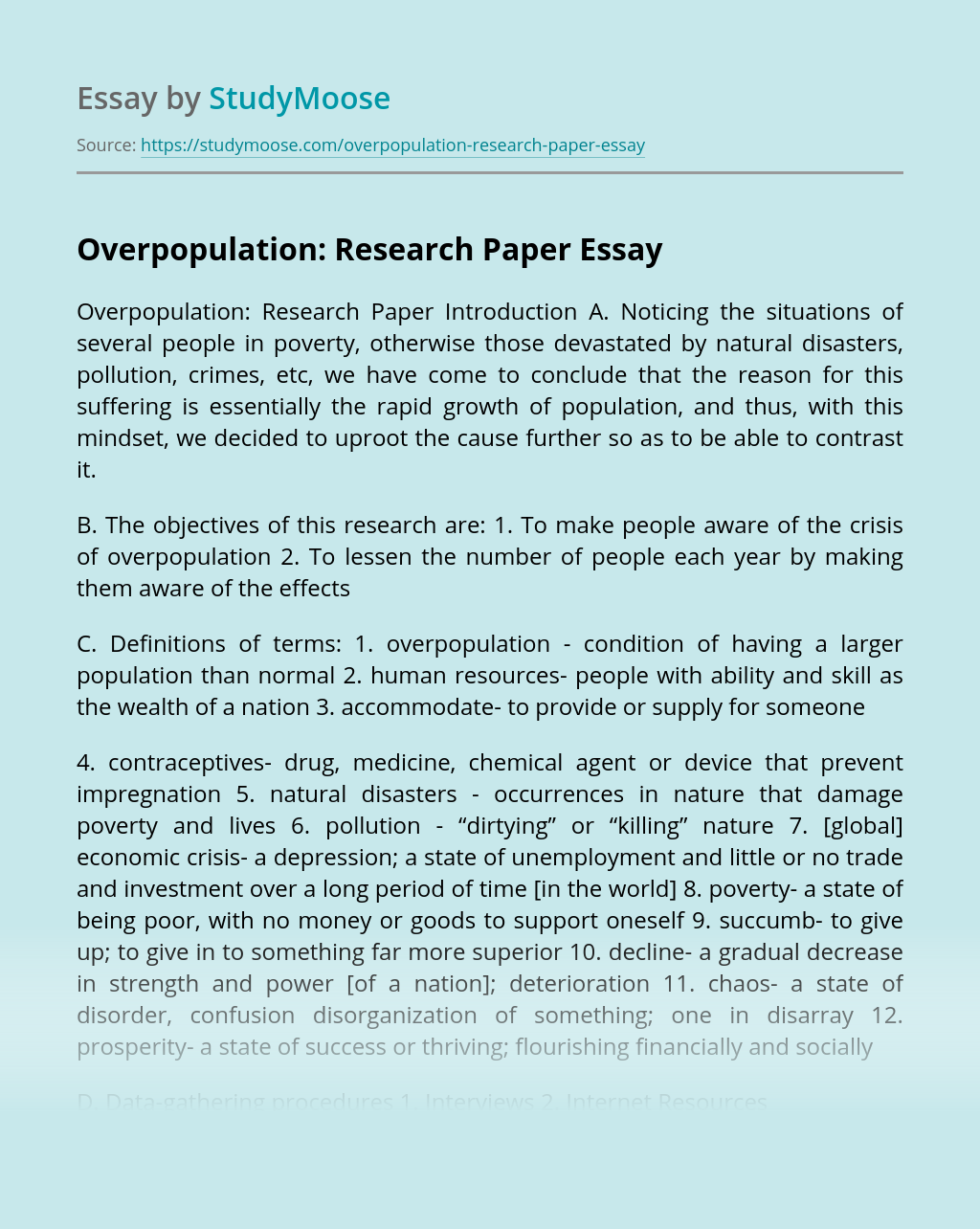 Turn in your highest-quality paper
Get a qualified writer to help you with
“ Overpopulation: Research Paper ”
Get high-quality paper
Helping students since 2015
Stay Safe, Stay Original