Shakespeare’s Macbeth, based on a play written in 1605 explores the life journey of Macbeth as he climbs the ladder of the social hierarchy. Determined to become King, Macbeth will kill any and all that get in his way. Driven by ambition, Macbeth puts his faith in the words and prophecies of three witches after a prediction that Macbeth would gain the new title of Thane of Cawdor. Alongside with ambition, Lady Macbeth, is a key instrument to Macbeths’ ambition to become king, continuously pressuring him, when he fears he has gone too in his schemes for greatness.

Don't use plagiarized sources. Get your custom essay on
“ Causes of Macbeths Downfall ”
Get custom paper
NEW! smart matching with writer

We can definitely see a well – regarded and loyal soldier of the Scottish army change to a murderous tyrant. His downfall is complete and he is responsible for his fate. It is his ambition, the influence of his wife, Lady Macbeth and the prophesies of the three witches and then his misplaced confidence in his invulnerability that causes his decline. These all contribute to the primary reasons for Macbeths moral downfall as he climbs the ladder of success.

The term ‘moral downfall’ refers to the emotional and social impact as oppose to a physical downfall, which is described as a step back in society, including the loss of money, fortune, family, social life and wellbeing. By succumbing to committing evil acts to achieve his ambition, he basically destroys Macbeths morality, leading to his downfall. Macbeths Ambition

In Shakespeare’s Macbeth, ambition is the main theme that the protagonist, Macbeth, possesses. To be ambitious is basically an eager or strong desire to achieve something, such as fame or power.

In Macbeth, ambition is a main theme. Macbeth, the protagonist and tragic hero in William Shakespeare’s Macbeth, possesses hamartia. Hamartia, named by Aristotle in Poetics, is a tragic flaw possessed by any tragic hero. Over the course of the play, Macbeth’s ambition grows. He succeeds in murdering Duncan, being named the new king, and ruling the kingdom. As his success grows, so does his ambitious nature. Fearing that the rest of the witches’ prophecy will come true (that Banquo’s sons will be kings), Macbeth decides to murder both him and his son (namely Fleance). Still feeling threatened, Macbeth murders Macduff’s family (to send a message of his power to Macduff). It is evident in the play that this theme exists. We can definitely see that Macbeth uses his ambition to justify bad and evil actions, whereas most will use it for good. Not only it is seen throughout the course of the play, he’s ambition is revealed by Macbeth in Act 1, Scene 7.

As mentioned in lines 25-27, Macbeth says: I have no spur to prick the sides of my intent, but only vaulting ambition, which o’erleaps itself and falls on th’ other. Macbeth, trying to rationalise his impending murder of King Duncan, continues his great “If it were done” which was a technique incorporated by Shakespeare called a soliloquy. As Macbeth has just explained to himself, there’s no real justification for the crime—Duncan is his relative, a meek and moral man, a good king, and, furthermore, a guest at his castle. All this argues against so bloody a deed, which will appear unjustifiable to mortal and divine eyes alike. Therefore, Macbeth has no “spur” to prick his intent, which is likened to a wild steed—no motivation to inspire the murder. Continuing the horse metaphor, he can only draw on “vaulting ambition”: an intense desire for power. His desire vaults even beyond its intrinsic limits (“o’erleaps itself”) to land on “th’other” (the other side)—possibly, to land somewhere unknown and beyond reason, as Macbeth regrets that he is motivated only by ambition and not by some more worthy motive. Those propelled by ambition often end up worse than they were before once the deed is done. Through this quote mentioned in Macbeths’ soliloquy in Act 1, Scene 7, it is evident that Macbeth is driven by his ambition to kill for power as his only motivation to gain the crown leading to Macbeths’ moral downfall. Lady Macbeth

Alongside with Macbeths’ ambition to become Thane of Cawdor, his wife, Lady Macbeth is another influential being that causes Macbeths downfall. As the lead up to the event of King Duncan’s murder Lady Macbeth tricks Macbeth into killing Duncan by using her cunning and complicated words. She makes Macbeth think that he has to kill Duncan for his benefit. Lady Macbeth deceives him into thinking that only he would gain more power, and it wouldn’t benefit her. Lady Macbeth counters Macbeths’ arguments by saying that he needs to muster up all of his courage, and just follow here directions. Lady Macbeth plans the murder strategies, and influences Macbeth to go along with her strategy. Macbeth doesn’t want to kill a good king for his own ambitions, but is persuaded to do it. From Lady Macbeth persuading him to kill Duncan, the first evil act he commits, he is drawn into believing the witches’ prophecies, and takes action to make them come true.

Through various quotes by Lady Macbeth, it is evident to say that with each other by their sides, was a negative influence to the lead up of Macbeths’ downfall. Lady Macbeth blames her husband for lacking the courage to do the deed, and because Macbeth is a warrior above everything else, her comments manipulate him a good deal. Indeed, “manliness” is an idea the play interrogates in various ways, such as when Macbeth says “I dare do all that may become a man who dares do more is none” (1.7.46-47). This is the belief that his wife use against him: “When you durst do it, then you were a man and to be more than what you were, you would be so much more a man” (1.7.51-53). In short, it is by means of his manhood, fundamental to his belief of himself as warrior, that Lady Macbeth manipulates her husband. Through these quotes, revealed by Lady Macbeth, we can establish that Lady Macbeth was another factor influencing the decision-making of Macbeth, thereby causing his downfall. Three Witches

With the influence of Macbeths’ ambition driving him to kill King Duncan as well as Macbeths’ wife, Lady Macbeth, driving him to fulfil his ambition, although there is another factor in Macbeths’ downfall. At the start of the play, the three witches inform Macbeth that he is destined to be king, as they are responsible for the introduction of the ideas that caused Duncan’s death and Macbeth’s destruction but not for Macbeth’s actions themselves. Ultimately the witches represents his fate and symbolise the dark side of humanity and the evilness of these beings, is evident that from the beginning when they meet and choose Macbeth to be their plaything.

They live to torture and harass. While they do not physically create the downfall of any human, they do lead the humans to fall by their own demise, by way of misleading illusions. In Act 1, Scene 3 the three witches make a chilling prophecy saying: “All hail, Macbeth, hail to thee, thane of Cawdor!” and “All hail, Macbeth, thou shalt be king hereafter!” each revealing Macbeths’ future. In these lines, it is evident that Macbeth thinks about what being king would be like and since he is known as a brave warrior, this causes him to break down even more. This is the other role that they play in the downfall of Macbeth. These predictions by the three witches soon motivates Macbeth to commit actions of evil and selfishness, which includes the murder of his best friend Banquo and the murders of Macduff’s’ family. By Macbeth becoming over confident we can see he has lost his moral values from becoming a well-liked and respected Scottish General to an evil murderous fool.

To conclude, the factors contributing to Macbeths’ moral downfall include his ambition to become King of Scotland by murdering his cousin, King Duncan, and the primary factor which was his wife, Lady Macbeth, that influenced him to commit such immoral acts through the insulting nature Lady Macbeth adopts. Finally, the last factor is the witches’ prophecies which drove Macbeth into believing he will be king and will have all this fame and power. However, he soon realises that he lost more than he received. We can see that Macbeth experienced a moral downfall as oppose to a downfall, which is described as a step back in society, including the loss of money, fortune, family, social life and wellbeing. We can see in Shakespeare’s Macbeth that Macbeth experienced a moral downfall as he climbed the hierarchy only to achieve nothing but hatred and loss of loved ones.

Causes of Macbeths Downfall. (2016, May 10). Retrieved from https://studymoose.com/causes-of-macbeths-downfall-essay 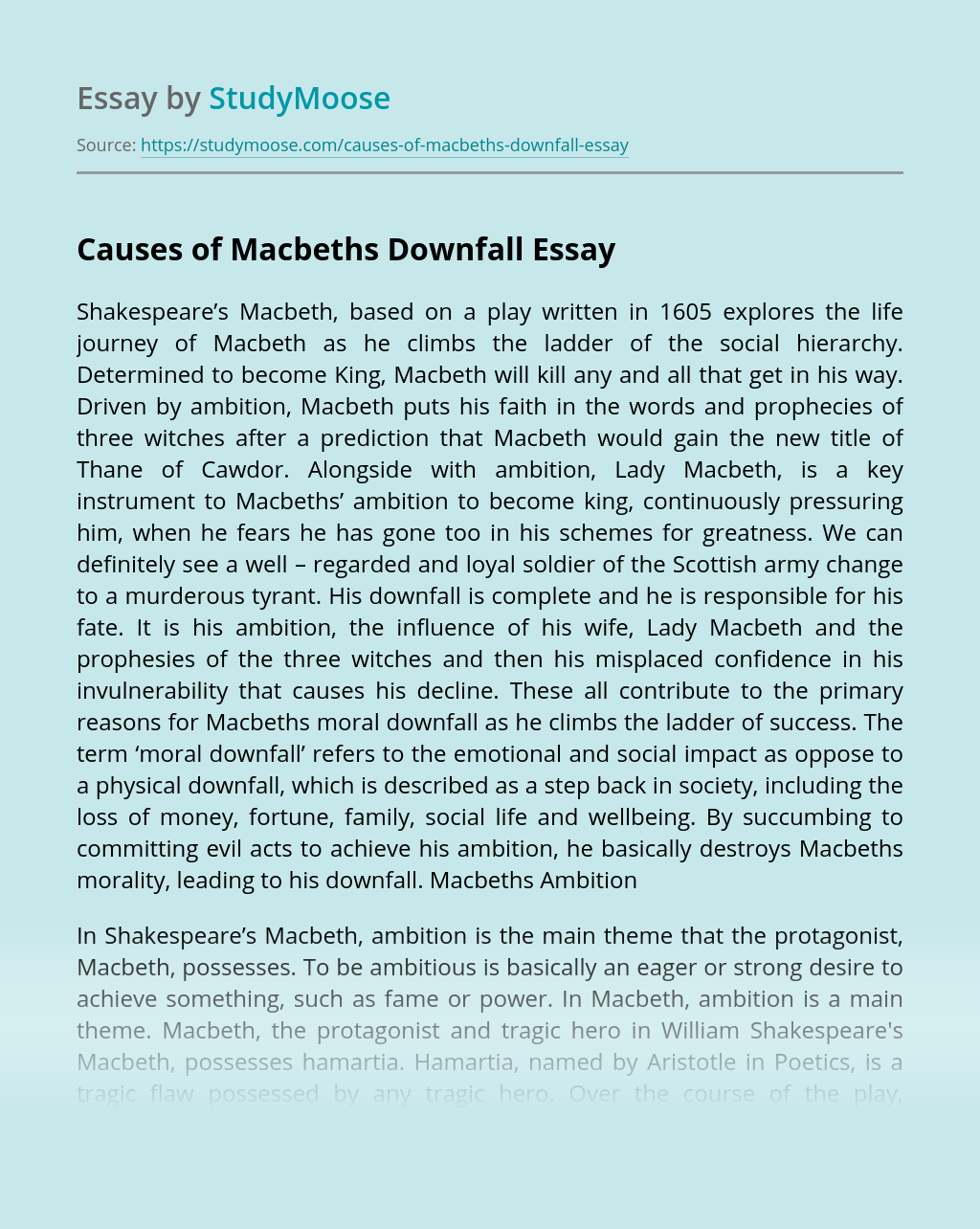