Did you ever have a doll when you were younger, that you would play with and pretend was your own, real baby? Did your sister ever make you play house with her, starring as the daddy, taking care of all sorts of children and pets? Life examples like these are proof that at a small age, we intend to become nurturers. But who wants to wake up every day with the pressure of going to school, going to work, and taking care of children? Though many of you sitting here are already parents and face similar responsibilities.

Never as teenagers, do we sit and daydream about being pregnant or becoming parents in high school. All we want to dream about is moving far away from our families, living on our own, and making a lot of money doing it. But does reality ever match the dream?

Are teens ever faced with the fact that their “perfect plan” might take a small detour? Today we’ll all come to the realization that teen pregnancy happens, it’s real, and is growing every day.

There are many factors that contribute to teen pregnancy such as peer pressure to have sex, absent parents, and also the glamorization of pregnancy the media gives it. Peer pressure is always tough to deal with, especially when it comes to sex. Many teenagers fall in to peer pressure due to making friends or fitting in with their peers. According to livestrong.com many teens have sex to seem mature, sophisticated and cool, but in some cases the end result is an unplanned teen pregnancy.

The Kaiser Family Foundation states that more than 29 percent of pregnant teens reported that they felt pressured to have sex, and 33 percent of pregnant teens stated that they felt that they were not ready for a sexual relationship, but proceeded anyway because they feared ridicule or rejection. Others feel pressured by the person they are dating. Still others find it easier to give in and have sex than to try to explain why not. Some teenagers get caught up in the romantic feelings and believe having sex is the best way they can prove their love.

There are two possible factors of teen pregnancy I wish to discuss with you tonight. The first is the lack of education of contraceptives and sexually transmitted diseases. According to Divya Mohan, spokeswoman for the National Assembly on School-based Health Care, there are about 1,708 school-based health centers nationwide, and only about 1/3–almost all of them high schools–provide contraceptives. Utah is one of 3 states that still require parents to sign off their children receiving any sexual education in schools. Brenda Hales, associate superintendent with the Utah State Office
of Education claims that “parents should be the primary source of human sexuality instruction and values related to the subject.” However, some lawmakers are complaining that parents are not talking about sex with their children, with the rate of STD’s and teen pregnancies on the rise in Utah. Planned Parenthood, a nationwide health center for pregnant teens, has been accused multiple times of infiltrating Utah schools to push their agendas.

The second possible factor of teen pregnancy is unwanted sex. According to teenhelp.com, nearly four in ten girls whose first intercourse experience happened at age 13 or 14, report that the sex was unwanted and involuntary. Feministe.com states that an estimated 20% of teen girls become pregnant as the direct result of rape. The Harvard School of Public Healt’s exhaustive research on the lives of girls, demonstrates that girls who are victims of violence from dating partners, are four to six times more likely to become pregnant, and eight to nine times more likely to commit suicide than non-abused girls. “Teen pregnancy isn’t simply about girls and boys being promiscuous or lacking access to sex education and contraception. Too often teen pregnancy is about girls losing agency over their bodies because of the unbearable injuries of being sexually violated.”

Teenage girls who get pregnant especially those who don’t have support from their parents–are at risk of getting inadequate prenatal care. Birth defects are a common result of neglecting prenatal care. Another risk of teen pregnancy is high blood pressure, also known as “pregnancy-induced hypertension.” Because of the immaturity of the teenaged developement, they are more at risk than women in their 20’s and 30’s. Other risks to brush over lightly that are to be taken seriously are premature births, low-birth-weight baby, STD’s, postpartum depression, and feeling alone and isolated. 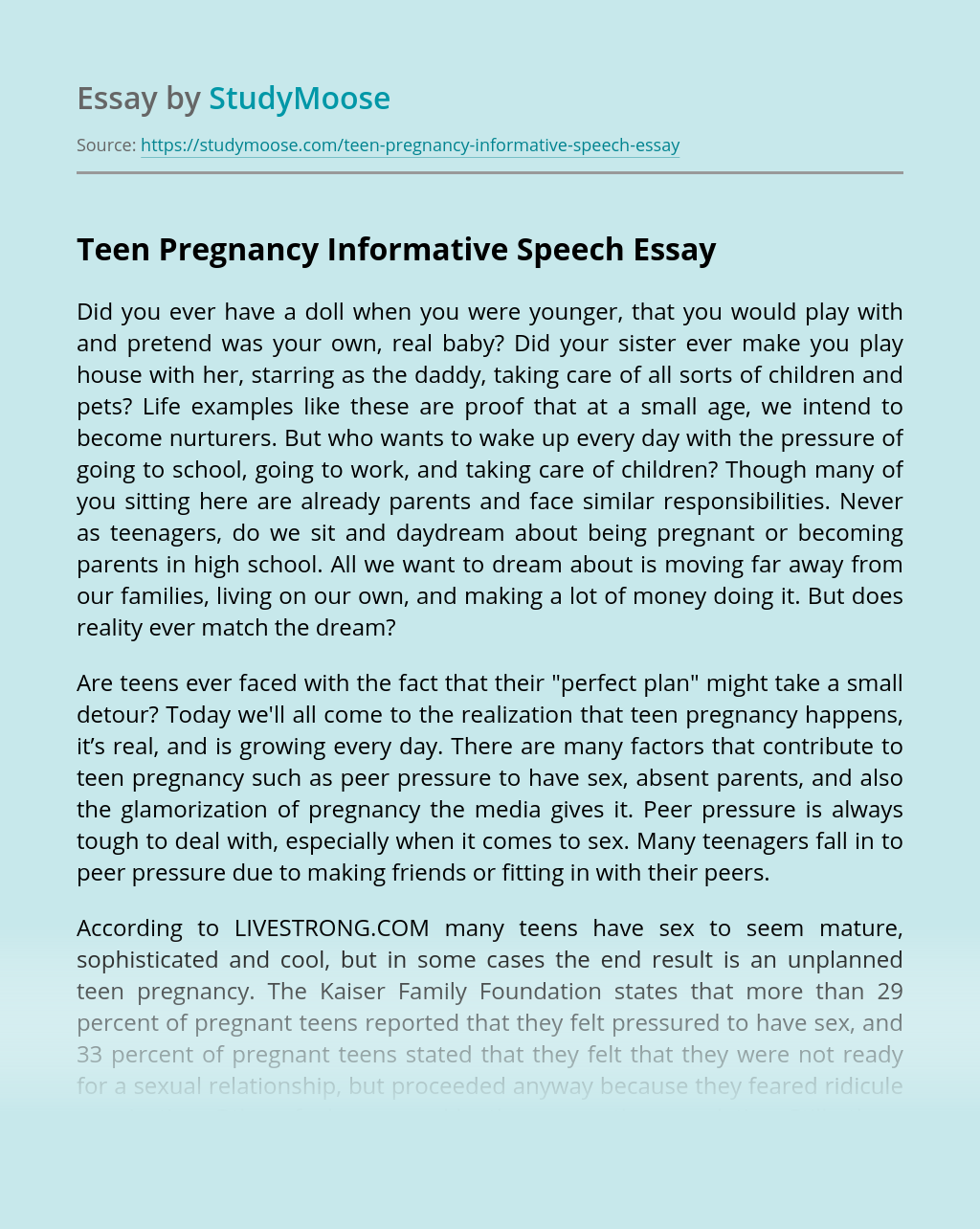