I. Attention-getting device: Growing up, I visited my family in Boston every summer. It was one of those summer days when the scariest thing ever happened to me. My Cousin like many others was born with type 2 diabetes. It was a normal, scorching hot day when my Cousin (Logan), my Brother (Anthony) and I were fishing in a nearby pond. We always packed Logan a safety backpack that was full of the things he might need in case of an emergency such as; sugar-free snacks and drinks as well as snacks and drinks with sugar, his blood glucose monitoring kit, and insulin shots.

Don't use plagiarized sources. Get your custom essay on
“ Informative Speech Diabetes ”
Get custom paper
NEW! smart matching with writer

After an hour or so my Cousin began so say “he was crashing,” not knowing exactly what he meant I just brushed it off and the next thing I knew I looked over and he was out on the grass.

Words cannot really describe how I began to feel but I knew I had to do something and quick or else I might loose my Cousin. Logan had no sugar in his body and crashed just like he said. Thankfully, he was very knowledgeable on his condition and walked me through the steps as best he could. I hate needles but I had to give him his insulin shot in order to keep him alive.

II. Background: Diabetes dates back to 5000 bce being one of the oldest diseases known to science.

It was described by ancient Egyptians as a disease with frequent urination. Diabetes as we know it today was commonly called The “Sweet Water” Disease in 100 ad. The disease was coined by Greek physician, Areteus who used the Greek word “siphon” or “going through” and the Latin word Mellitus meaning “sweet” was added because those diagnosed with diabetes their urine was sweet. In the 1800s the first chemical test for measuring sugar in urine was discovered but until then doctors would diagnose those with diabetes by actually tasting the patient’s urine for sweetness.

III. Relevance: Although we may not all have diabetes in this classroom diabetes is a huge threat to global health that is becoming a rapid epidemic throughout our world that touches all age groups. According to the American Diabetes Association there are 23.6 million or 8% people in the United States population who have diabetes IV. Establish credibility: I could sit here all day and tell you that none of us in this room will contract any form of diabetes but in actuality that would be a lie. After extensively researching diabetes I’ve come to the conclusion that diabetes is a serious threat that engulfs a vast majority of our population today. V. Thesis: Although diabetes is an incurable disease that affects a large amount of our population today but if we are well informed we can make smart decisions to prevent and maintain this disease

10/8/2008
VI. Preview: In order for us to become informed about diabetes there are a few things that we need to understand and today I will explain three aspects of it: A. What diabetes is/background information

B. Complications of diabetes
C. What we can do to prevent and maintain normal blood glucose levels TRANSITION: First, we must understand exactly what diabetes means and the types of diabetes to further our knowledge on the issue.

A. What is diabetes?
a) According to Francine Kaufman and Janet Silverstein at the Center for Diabetes this condition is defined as the process in which our bodies produce too much blood sugar or blood glucose. Sugars come from the foods we eat that we need to fuel our bodies. Our blood contains glucose because we need this for energy but diabetes patients have too much glucose in their bodies which is unhealthy.

b) Types of Diabetes

I. Pre-Diabetes: When blood glucose levels are higher than doctors would normally like but not high enough to be diagnosed as diabetes. According to the American Diabetes Association there are 57 million people in the United States diagnosed with pre-diabetes. Research has shown that if blood glucose is monitored closely at the pre-diabetes stage, type 2 diabetes can possibly be dodged.

II. Type 1: Usually begins suddenly before the age of 20. Caused by a mixture of different genetic abnormalities and environmental triggers. It causes the body to attack the pancreas making it unable to produce insulin. Someone with type 1 diabetes will need to get their insulin from shots or pumps everyday. Type 1 diabetes only accounts for about 5% of the cases in the United States according to Harvard Health Watch.

III. Type 2: The pancreas can still produce some insulin but the cells cannot use it. Someone with type two will need to take insulin or pills to help regulate the insulin in your body. Those diagnosed with type 2 diabetes usually do not contract it from their genes it is based more on lifestyle factors with obesity being the main contributor. According to Harvard Health Watch more than 90% of diabetics have type 2 diabetes. IV. Gestational Diabetes: Occurs only in pregnant women. After delivery, a Mother’s blood sugar level returns to normal but the mother as well as her child have a high risk of developing type 2 diabetes in the future. TRANSISTION: Keeping diabetes under control can reduce the risk of future complications. According to the American Diabetes Association, sadly, not many know they have diabetes until they encounter one or many of these complications.

TRANSISTION: It is obvious that the complications associated with diabetes can be scary and life threatening but there are many ways to keep your diabetes under control and prevent diabetes from entering your lifestyle.

C. What we can do to prevent/maintain normal blood glucose levels For those who are diagnosed with diabetes you can take some measures to keep your condition in line by participating in regular physical activities, have a healthy meal plan, maintain a healthy weight, and control your blood sugar levels by taking medications instructed by doctor(s). We can all as college students take preventative measures to stop diabetes from occurring in our lives. Although it may be hard being away from Mom’s home cooking this can be done by making healthy eating choices, increasing our physical activity, along with moderate alcohol consumption.

TRANSISTION: By better understanding diabetes and becoming knowledgeable on the consequences of diabetes we can prevent/maintain it.

I. Restatement of thesis: Diabetes is an incurable disease that affects a large amount of our population today but if we are well informed we can make smart decisions to prevent and maintain this disease

II. Closure: There is no cure for diabetes thus far but those diagnosed can still live a long healthy life if they take care of themselves. To better understand diabetes we need to recognize the four different types of diabetes; pre-diabetes, type one, type two, and gestational diabetes, become educated on the complications of diabetes, and realize what we can do to prevent and maintain diabetes. 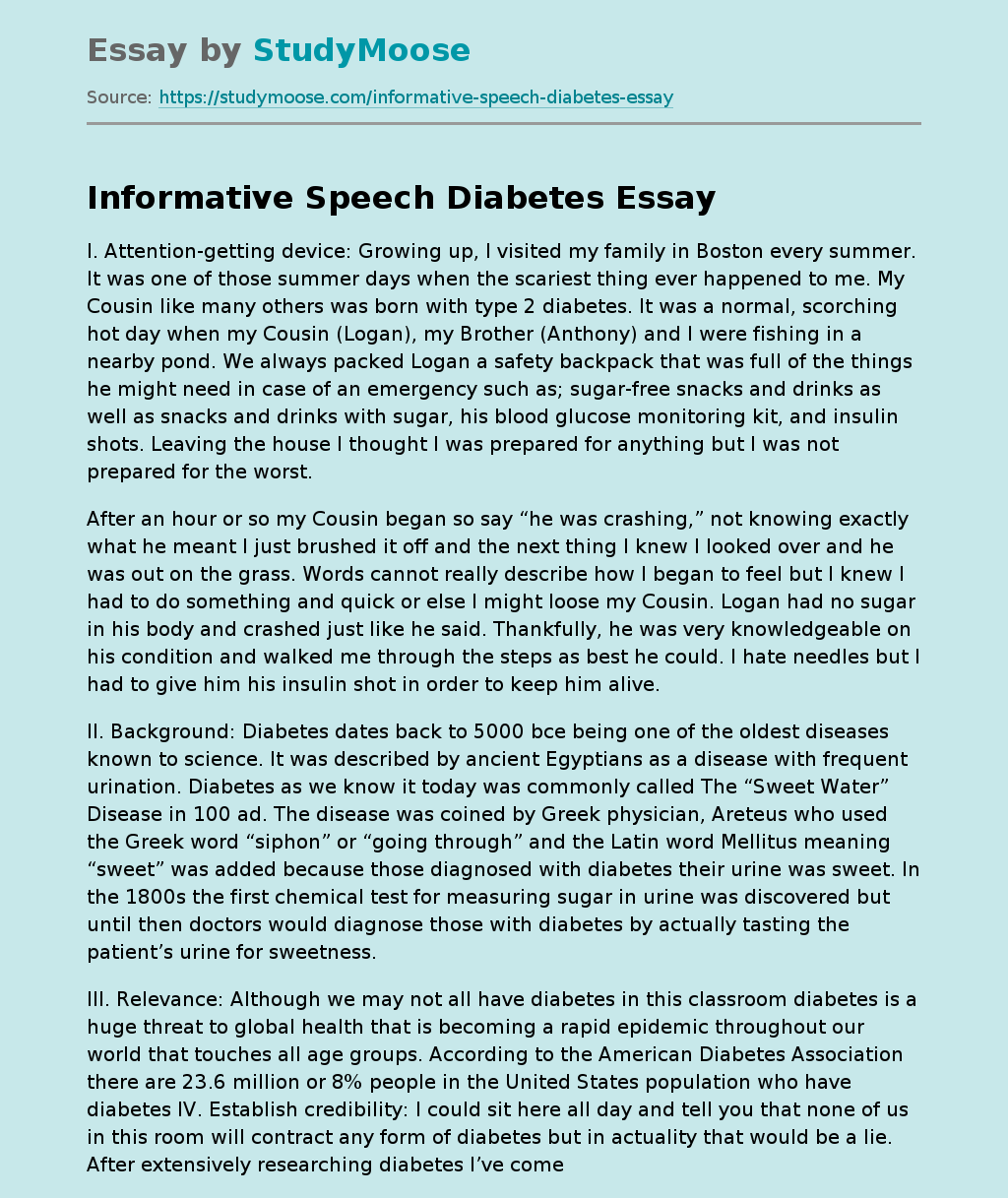