CENTRAL IDEA: to inform my audience about the theory of Deja Vu.

Including what, how and the effect about Deja Vu .

Attention Getter: I can’t remember any things well while I thought something happened to me, I feel like I ever seen something but I don’t know when it was or where it was. And I also feel like I’ve been somewhere but I don’t know when it was. It’s only like I ever do that but I unable to really remember when and how the earlier experience occured in detail.

Don't use plagiarized sources. Get your custom essay on
“ Outline Informative Speech on Deja Vu and Memories ”
Get custom paper
NEW! smart matching with writer

Reveal the topic: I often feel this thing, when this happened to me, I was really confused and feel like at the strange occasion. A. At the first feeling when I feel that event. I don’t know what happened to me, and I want to ask what was going on?? B. But I ever heard that thing named by Deja Vu, so I read some articles about it.

Establish creadibility: I have learned about my Deja Vu feeling during several weeks ago, and I search some source about Deja Vu for this speech. Relevancy statement: as we know Deja Vu happened in almost people’s life but they don’t know the real theory about Deje Vu. Preview of main points: today I would like to inform you about the theory of Deja Vu. Because most people have experienced Deja Vu in their life then I inform you including what is Deja vu, How can it happened, and what the effect of Deja Vu. (Transition): let’s start with the definition of Deja Vu.

A. (Subpoint) According to Dr. Vernon Neppe, MD, PhD. Director of the Pacific Neuropsychiatric Institute (PNI). Deja Vu is the subjective influence about the opinion regarding the percieve of similiarity between the current experience with the past which is difficult to explain. 1. While James Lampinen, a professor of Psychology from the University of Arkansas. He defines that Deja Vu is the strong feeling about the global similiarities thet occur in the new situation.

The similar experience in Deja Vu is overall, because every small detail is very similar with the experience happened in the past. But this experience always accompanied with unreal feeling. 2. Vernon Neppe and James Lampinen, they ever held the survey on 1980. Lampinen said that almost people have experienced Deja Vu, at least once in their life time. So Neppe said that 70% of population ever had experienced Deja Vu. The youngest person who ever experienced Deja Vu is five years old. 3. The last is according to Sigmund Freud, a psychoanalisist. Deja Vu occurs when a person spontaneously remember back on the fantasy which appeared unconsciously, because this thing is not realize then the content of his fantasy can’t recognize further. He could only remember a second about this event which occur in that time it had occured to him sometime in the past.

B. (Subpoint) Actually there are many definition defines what is Deja Vu, not only the definiton in Psychiatric Science. But there is the opinion that Deja Vu occurs because it is influenced by age. 1. A scientist from Japan, he also a Neuroscientist MIT. Susumu Tonegawa, asume that Deja Vu is a disease on a memory. So that who getting older he is who more experiencing Deja Vu. Then Tonegawa do the experiment using the mouse by comparing the personal memory with the new memory that recorded in dentate gyrus. Dentate gyrus is a part from our brain, the function is to contribute the thought to the formation of new memories. So in this case explained why Deja Vu influenced by age because who getting older his dentate gyrus is can’t funcionate normally. Then can make us difficult to determine something happened is new events or for along time. (Internal Summary) As we know many definition of Deja vu, we can define from all definition just now that Deja Vu is one of the phenomenon of the human brain. Because occurence of Deja Vu is correspond with our memories in the brain. (Transition) we have known about what is Deja vu or the various definiton from Psychologist side. Then Let’s start to the real theory of Deja vu.

Actually many scientiest have been trying to understand this phenomena until all of them found at least 40 theories. I wouldn’t tell you all of the theory, but I will tell you some theories that you have to know. A. (Subpoint) First I will begin from Sigmund Freud’s theory, he is a legend Psycholog. But before that I’ll show you a famous picture. Here is it!! This is the illustration picture of the tip of the iceberg. The brain expert usually used this illustration to show how was our real mind. The water surface is our limit awareness, our conscious mind is the chunks which appears above the water surface, while the subconscious mind is the giant chunks in the see. According to the brain expert, actually for the most part of our information that we received was saved on our subconscious mind and have not appear to the surface yet. Then only a fraction from the information that we received is really we remember and relize about it.

B. (Subpoint) Next is about the other theory, named by The memory from other sources. Because in this theory said that our brain saved a lot of memory which come from various aspect in our life, like the movie that we watched, picture or book that we read, these informations we saved uncounsciously. By the time passed away, then when we experienced the events that similar with the information we ever saved, so the memory which saved unconsciously will appear. (Internal Summary) As we know that many theories explained how Deja vu happened, but maybe only some theory is appropriate with what we feel about Deja vu. So from those theories we know that Deja vu happened from our unconscious mind and memory. (Transition) Now let’s move to the impact of Deja vu

Most people who ever felt Deja vu they asked is Deja vu has the bad impact?? And the answer is there is no. Here there are some opinion about the effect of Deja vu.

A. (Subpoint) So far the scientists who studied about Deja vu didn’t found yet the bad impact of deja vu, they said feeling Deja vu is only the fantasy or a uniqueness which we appropriate to feel it.

B. (Subpoint) Most people who ever experienced Deja vu they only feel confused, fell like at the strange occasion. But actually nothing happened, they only feel the similar feeling with the current situation. (Internal Summary) According to the research that I found, Deja vu is not giving the bad impact to people who feel it, maybe they only getting weird to the situation that he ever experienced it before but can’t be explained detail. (Transition) Now we know more about Deja vu

Summary Statement: Finally we know about the real theory of Deja vu and nothing to be worried about feeling Deja vu, because Deja Vu have be experimented by many scientists and some brain expert. Deja vu is only the phenomenon of the human brain which related with our unconscious mind and our subconscious memory.

(Memorable Closing Statement): and remember that deja vu is only the phenomena of human brain. 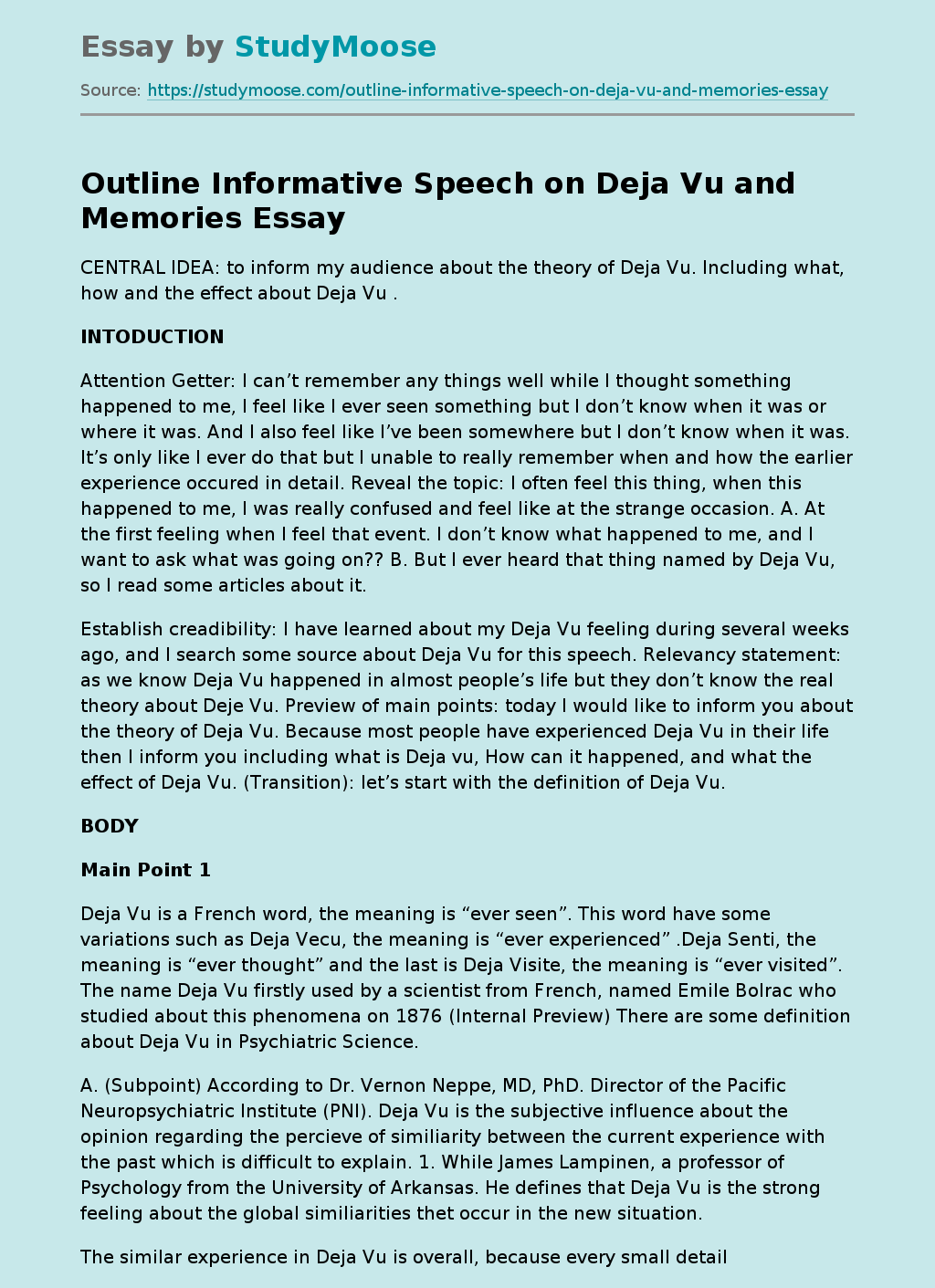