I. Mahatma Gandhi said, “An eye for an eye will only make the whole world blind.” II. Today I am going to inform you about the issues of TV violence and the impact of the contents’ exposure to children.

Don't use plagiarized sources. Get your custom essay on
“ Informative Speech Outline, Children and Violence ”
Get custom paper
NEW! smart matching with writer

III. I am not a parent myself; however this issue should be of concern to each and every one of you because children are our future and we should do what we can to keep our futures looking bright. IV. From the definition of violence, how the media rates violence, and children’s exposure to media violence. (Transition: With that being said, let me tell you about what the definition of violence is and what is considered to be violent.

I. What is considered to be violent can vary greatly, depending on the people you address. A.As stated in the Merriam-Webster’s dictionary, violence is defined as, “an exertion of physical force so as to injure or abuse (as in warfare effecting illegal entry into a house)” and/or, “an instance of violent treatment or procedure”. B. According to law.yourdictionary.com, violence is defined as, “the use of physical force, especially physical force utilized with malice and/or the attempt to harm someone.

” C. Both of these definitions are pretty similar, basically meaning violence is anything involving the use of physical force to cause harm to others.

1. Violence can be anything from punching someone in the face to something more severe, such as stabbing someone with a knife and killing them. 2.Law enforcement punishes people that act violently and the severity of the punishment depends on the age of the criminal and the type of violence committed. (Transition: With that knowledge of what violence is, let me inform you of how the media rates violence.) II. The media has a general guideline for the suitability of shows for different age groups. A.Television shows have audience ratings, designed to help indicate which audience the TV program is appropriate for. 1.TV-Y, which is appropriate for all children, targeting children from ages 2-6 yrs. Old. 2.TV-Y7, directed to older children. Ages 7yrs. old and up. 3.TV-G, general audience.

4.TV-PG, parental guidance suggested. May contain material that parents may find unsuitable for younger children. Including moderate violence, some sexual situations, infrequent coarse language, or some suggestive dialogue. 5.TV-14, parents strongly cautioned. Ages 14 yrs. and up. To include: intense violence, intense sexual situations, strong coarse language, or intensely suggestive dialogue. 6.TV-MA, mature audience only. Unsuitable for children under 17. Contains graphic violence, explicit sexual activity, or crude indecent language. B.Even though there are warnings for the material that you are about to view on the TV, these warnings don’t physically stop you from watching the content that isn’t appropriate for your age group.

(Transition: Now that you see the relationship between media and violence, let’s talk about my last main point, which is children’s exposure to media violence.) III. With the media increasing the amount of violent shows aired, children are becoming more exposed to the content. A. The media doesn’t necessarily target children as their main audience, but children nowadays do have more access to exposure of it on TV, whether it is due to the lack of parents monitoring what children watch or the mere public airing of it. B.According to the American Academy of Pediatrics website, “they found that children’s shows had the most violence of all television programming and that statistics read that some cartoons average twenty acts of violence in one hour, and by the age of eighteen children will have seen 16,000 simulated murders and 200,000 acts of violence on television.” 1.The American Academy of Pediatrics website also says that, “ Television programs display 812 violent acts per hour; children’s programming, particularly cartoons, displays up to 20 violent acts hourly.

C.The American Academy of Child and Adolescent Psychiatry says that, “hundreds of studies of the effects of TV violence on children and teenagers have found that children may: become “immune” or numb to the horror of violence, gradually accept violence as a way to solve problems, imitate the violence they observe on television; and identify with certain characters, victims and/or victimizers.” D.Professor Craig Anderson testified before the U.S. Senate Commerce Committee hearing in 2004, stating three effects of exposure to media violence, “short-term effects: aggression increases immediately after viewing a violent TV show or movie, and it lasts for at least 20 minutes. Long term effects: children who watch a lot of violent shows become more violent as adults than they would have become had they not been exposed to so much TV and movie violence. Long-term and short-term effects occur to both boys and girls.”

II. I have told you about the definition of violence, how the media uses violence for entertainment, and about children’s exposure to TV violence. III. Please take this information to heart, when you’re sitting down on your lazy boy recliner after work and trying to choose something to watch on TV. IV. So I ask you, is your eye really worth the violence? 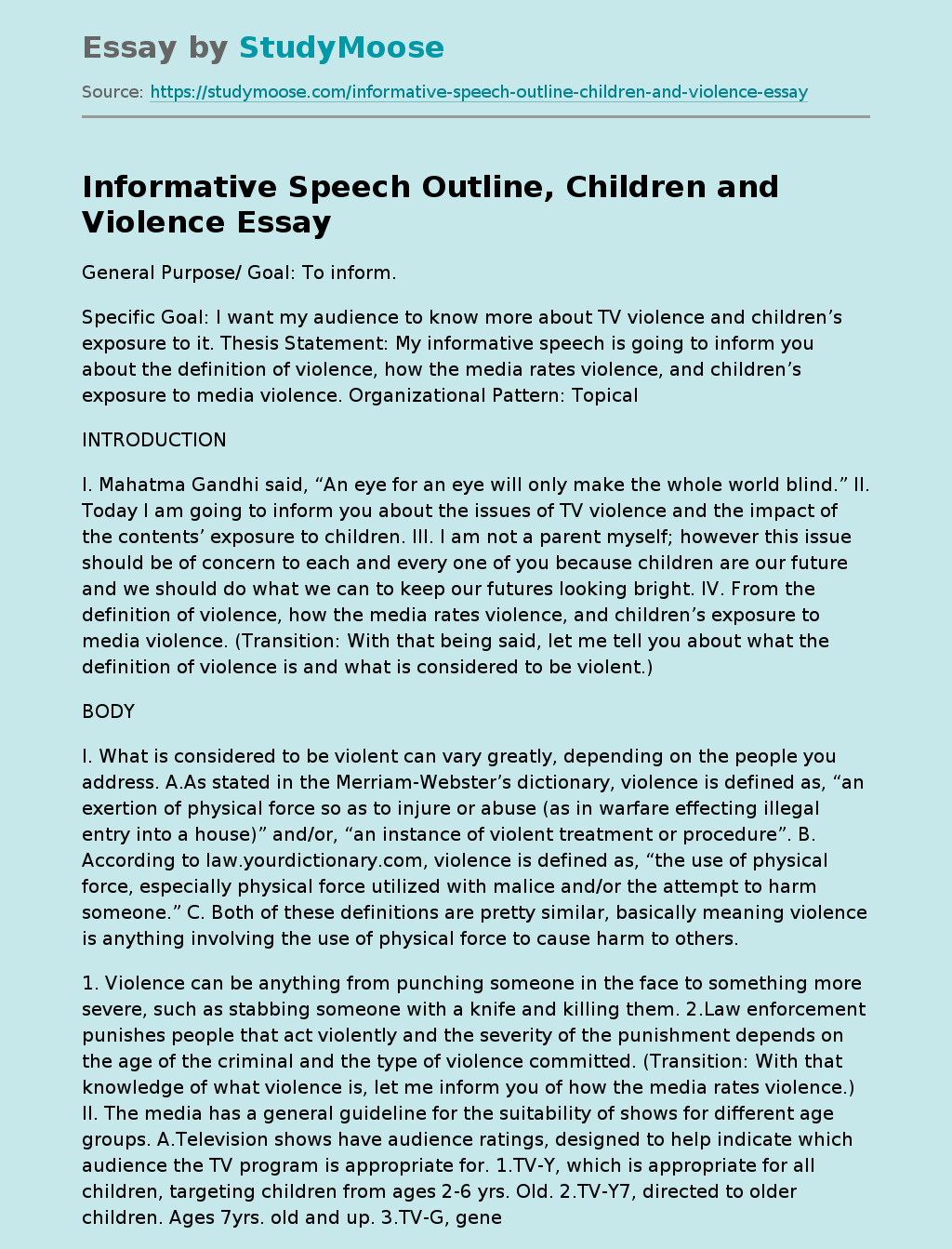