Teen Pregnancy is a common thing

Due to intense study on the topic in question, various researchers have proven that premarital pregnancy in teenagers is rising on a rampant thought-out the world. It is evident that in recent years, more and more young teenage mothers have given birth at an increasing younger age outside of marriage. This is deemed as an urgent crisis in the world today. Teenage pregnancy is associated with an array of consequences that a young mother has to deal with. These consequences include medical and health complications, incomplete schooling and higher dropout rates, lower career aspirations, and a life encircled by poverty.

Don't use plagiarized sources. Get your custom essay on
“ Teen Pregnancy is a common thing ”
Get custom paper
NEW! smart matching with writer

This article focuses on factors influencing teenage pregnancy and the consequences associated with teenage pregnancy. In conclusion this paper will illustrate implications for educators, researchers and practitioners. Keyword: Teenage Pregnancy, consequences; influences

Teenage Pregnancy is one of the most alarming issues throughout the world today. Many teenagers engage themselves in sexual intercourse with their partners just to be “in” with their friends.

Surprisingly, some countries even celebrate early teenage pregnancy, as it is a clear sign of fertility. But moderately, a teenage girl being pregnant before adulthood is critically looked down upon with shame. In 2009, around 410,000 teenage girls, ages 15 to 19, gave birth in the United States, and shockingly, that’s a 37 percent decrease from the teen birth rate in1991.

Teen pregnancy is a pregnancy occurring in a young girl between the ages of 13 and 19. Consequences the effect, result, or outcome of something occurring earlier Influences is a power affecting a person, thing, or course of events, especially one that operates without any direct or apparent effort

Lack of Parental Guidance and Structure

This is considered a major factor contributing to teenage pregnancy and motherhood. Rosen (1997) found a growing number of American adolescent females lived in relatively unstable family situations and many became sexually intimate for a short-term sense of comfort. Parental rejection, or a lack of warmth, affection, or love, also led teenagers to seek affairs outside the family to boost their self-esteem (McCullough & Scherman, 1991). However, strong family relationships and two parent families have been found to lower the incidence of adolescent pregnancy. Research claimed that’s parental influence is the most significant variable in teenage pregnancy prevention and the absence of a father is the chief factor in teen girls becoming pregnant. Most teenage mothers have not been educated about sex prior to becoming pregnant, due in part to a lack of communication between the teenager and her parents. According to the article “Lack of Parental Guidance Contributes to Teen Pregnancy”, parents sometimes knowingly provide false information about sex to discourage their children from participating in it. Sexual Education is also critical in the life of a teenage and it all starts in the home.

Peer pressure is an early stage of pregnancies. This pressure causes sexual intimacy for the opposite sex. If a child hangs out with a group who is sexually active, then nine out of ten that child is sexually active too. Most teenagers opt to have sexual intercourse because they need to achieve the acceptance given by the “circle of friends”. The only way to be accepted is to have relationship with the opposite sex and have sexual relations. In some countries, teenagers face too much peer pressure to start having sex at a very young adolescent age. This kind of behavior may lead to unwanted teenage pregnancies.

Sexual abuse may alter perceptions about sexual behavior, leading an abused teenager, especially females, to initiate sex at an earlier age and have more partners. It is speculated that some teen pregnancies possibly resulted from unresolved feelings and behaviors associated with earlier sexual abuse. Although the majority of teenage females claimed their first sexual experience was voluntary, research have proven that about 40% of girls who first had intercourse at age 13 or 14 indicated involuntary or unwanted inter­course with an older partner. Herman-Giddens et al. (1998) reported that females who were sexually abused as children were three times more likely to become pregnant during their teen years.. Like­wise, about two-thirds of young mothers were previously sexually abused or raped by a father, stepfather or other relative and often suffered from low self-esteem and depression (Sarri & Phillips, 2004; Villarosa, 1997).

The factors mentioned above are just a few but other research and studies reveal more contributing factors such as cultural traditions, sexuality, role of drugs and alcohol usage, lack of contraception, age discrepancy in relationships, dating violence, socioeconomic factors, media influence and lack of sex education.

Consequences of Teenage Pregnancy Unplanned pregnancies are always fraught with challenges, but can be especially difficult when the parents involved are teenagers. This includes specific healths, financial and emotional issues that need to be handled when it comes to a teen pregnancy. Medical and Health risk on the teen mother

First of all, pregnancy for a teenager can be physically difficult. Teens are still growing themselves and their bodies may have trouble handling the added demands of a pregnancy. Teens are also less likely to seek early and regular prenatal care, which means that conditions that could have been headed off by early intervention can become problematic. Consequently, pregnant teens are more likely to suffer from high blood pressure during pregnancy, which can lead to pre-eclampsia, a serious condition for both mother and child. Health risk on the child

Babies born to teen mothers are more likely to be born underweight and are more likely to be born prematurely conditions which increase the likelihood that the babies will require additional medical care and develop ongoing medical conditions. Because these pregnancies are typically unplanned, the teen may have been drinking, smoking or using drugs at the time of conception or during early pregnancy when the impact of such behaviors can be most harmful to the baby.

The financial consequences of teen pregnancy are both immediate and long term. On the immediate front, there are the expenses of prenatal care and delivery. These costs may be higher than usual if the mother or baby need additional care. There are also the expenses of providing for the baby to be considered, as well as child care if the mother is to continue her education. And because few teen mothers are actually married to their baby’s fathers and few teen fathers are able to pay child support, this leaves the financial burden for caring for the child on the mother and her resources, be they family, community, or governmental. With these new demands, few teen mothers are able to finish high school or obtain a GED. This means that they’re less able to find good jobs to support themselves and their children in the future. In fact, more than half of the families on welfare include mothers who had their first child as a teenager.

The effects of teenage pregnancy listed above is the most common and direct consequences. Other the other hand there are a lot more consequences to consider, such as, career opportunity, educational outcomes and poverty. NB. Most teenage mothers are unlikely to complete their high school diploma. Only 1.5% of the total teenage mothers complete their college degree, only if they have supportive family and friends.

It’s no secret that teenage pregnancy is a common thing to see these days. There are many causes of teenage pregnancy, ranging from lack of parental guidance, to not being educated on safe sex, to peer pressure, to sexual abuse and rape. The fact is, with a little communication and education, the number of teenage girls who become mothers can be drastically reduced. This call for concern and that parents and educators need to properly inform teenagers about the cause and effects of teenage pregnancy. Teenage pregnancy can be a disaster for a teen’s future.

Teen Pregnancy is a common thing. (2016, Oct 12). Retrieved from http://studymoose.com/teen-pregnancy-is-a-common-thing-essay 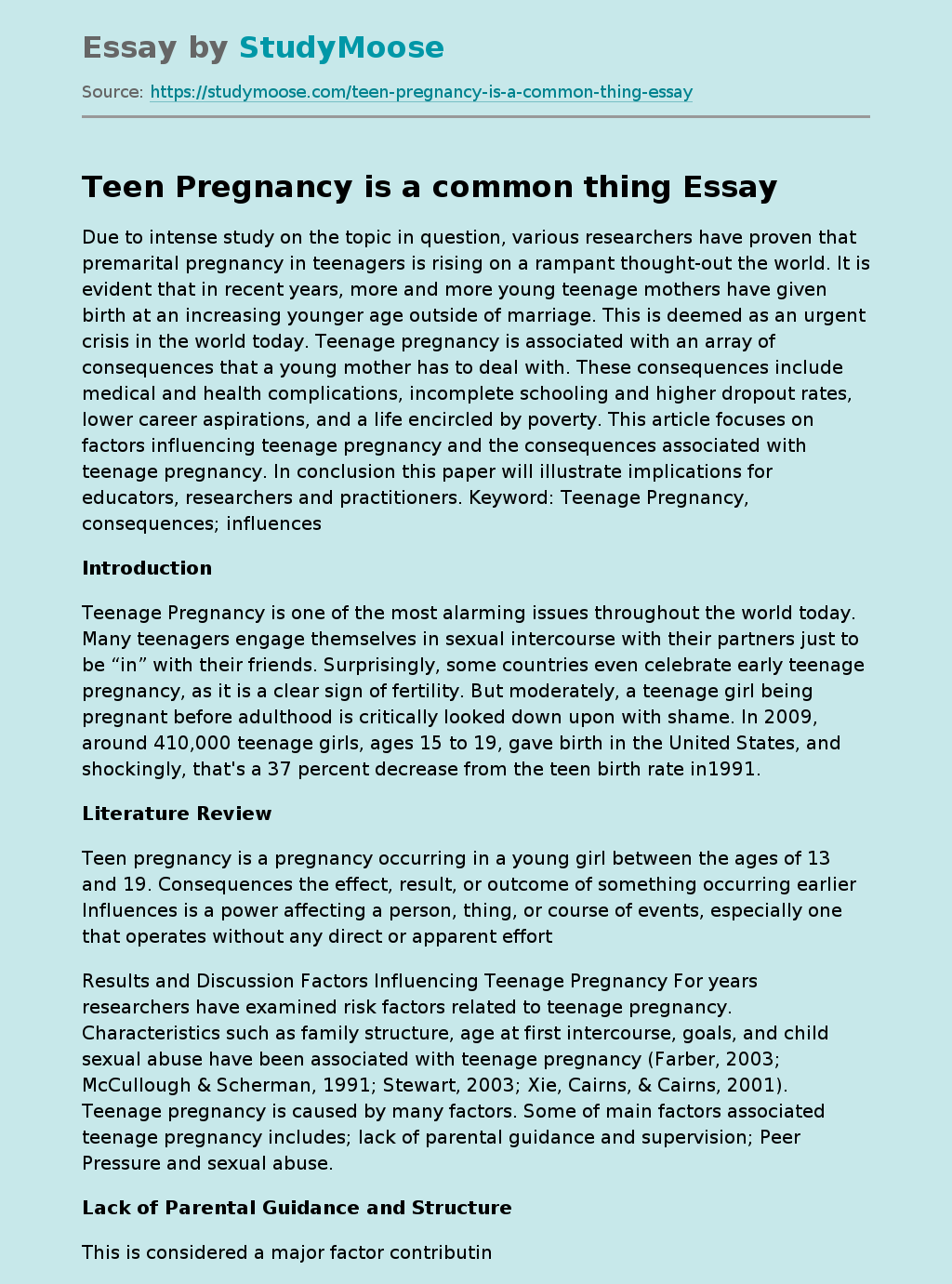