Self-Awareness in Teen Pregnancy and Vulnerable Populations. Vulnerable populations are groups that are not well integrated into the health care system because of ethnic, cultural, economic, geographic, or health characteristics (“Vulnerable populations,” 2010, para. 1). Teen pregnancy falls into this category because health-related problems that will negatively influence the teen and child’s lives. Some of the issues the teen can face are parenting problems, relationship problems to include domestic violence, sexually transmitted diseases, child abuse, poor birth outcomes, and suicide attempts. The many problems that arise are from a lack of social and environmental resources that leads to poor decision-making.

Don't use plagiarized sources. Get your custom essay on
“ Self-Awareness in Teen Pregnancy ”
Get custom paper
NEW! smart matching with writer

It is hard to determine the age of the father of teen mothers because the information on men are missing on women under 25 that gave birth or the age was not reported. Going to high school in the early 1980s I did see some girls leave the school and discovered later they were pregnant.

Sex was something to experiment with, and there were always rumors on what guys were doing what girls. I never thought of or heard about the number of girls who got pregnant.

I didn’t think about the consequences that were to follow or how they affect the girls or guys involved. I was in my own little world, and it never affected me. The girls who got pregnant were the easy girls, or the “sluts” of the school. I never heard about the boy who got the girl or girls pregnant. It seemed that it was the girls fault. As I grew older I learned there were many reasons girls got pregnant. Some were raped, or taken advantage of while drunk, some wanted to get pregnant, some want try to experience sex, and ended up pregnant on their first time. During research on this topic and looking back, my world evolved around my small community. Two or three girls would get pregnant at my school that I would know about, but in reality it would be more like eight or nine.

The percentage of pregnant teens at that time showed it to be the same at every high school in the nation, and it would be brushed under the proverbial carpet. Until doing this research I did not realize the poor outcomes and dangers that lurked for this population. Condemning of pregnant teens can cause negative outcomes and consequences. Teens can suffer depression and low self-esteem by internalizing their problems. Teen mothers are less likely to seek prenatal care, and along being pregnant while they are still growing has shown an increase risk of babies being born with lower birth weights (Kramer & Lancaster, 2009). Some families have disowned their pregnant teen leaving the teen to fend for themselves. This leads some of the pregnant teens who fall into an abusive relationship or neglect and abuse toward their children. With the little knowledge I had as a nurse; I would ask myself,”Why did she not use protection?” I forgot that protection does not work 100% of the time.

After doing the research I have learned not to judge a patient on their first appearance. In this group of vulnerable patients, I have learned that teens make mistakes, teens are also taken advantage of, and last some use protection and the teens still get pregnant. The pregnant teen or teen mother needs a caring nurse to show empathy and to trust. When taking care of this population, I have learned that I will need to be thorough in my examination and questioning. I want to make sure the teen, and the baby are safe. By asking the appropriate questions, I can learn about the teen’s mental health, living situation, and how the child reacts to the mother. With the information I gather I can help with many resources for both the pregnant teen and the teenage mother and her child. In the neighborhood Jessica Riley is an eighteen-year-old mother of two young children. She had her first child just before she turned 17. She was living on her own when she met her boyfriend, and he moved in with her almost immediately. Jessica soon found herself pregnant for the second time and in an abusive relationship.

Jessica’s boyfriend, Casey was physically and verbally abuse. Jessica continually blamed herself for the abuse and thought if she tried harder the abuse would get better. Jessica’s children were well care for and healthy. Jessica received Medicaid for medical needs and WIC coupons to help with food. Jessica worked full time, but could not support the family without government assistance. By working in the Emergency Room I am required to ask each patient if they feel safe at home. The medical providers are directly looking for patients who are being abused. After asking the same questions hundreds of times, I am able to pick up hints in behavior and body language. I would sit down with Jessica and try to build a trusting relationship with her. By asking one additional topical related question has allowed women to disclosed abusive relationships (James & Shaefer, 2012). T

elling her this is not her fault, but a problem with her boyfriend. Working nights I would alert the social worker on call, and to have the social worker try to come in to talk to the patient. Studies have shown if the health care provider steps in than the violence has a high chance of ending, and a large number of teens or women will leave the abusive relationship (James & Shaefer, 2012). Depending on the state or federal laws where the nurse works a call to the police may be necessary.

I would have a list of resources for the patient to include shelters she could go to be safe. I would also encourage her to seek counseling and talking to her parents. My perceptions have change to a point from why did it happen to how can I help this patient to my best of my ability. Being a front line caregiver I have a chance to change the patient’s life with a few questions. I can work at building a trusting relationship, and make it my caring moment. By getting involved, and setting up resources I can decrease the number of negative outcomes the pregnant teen and baby may have. 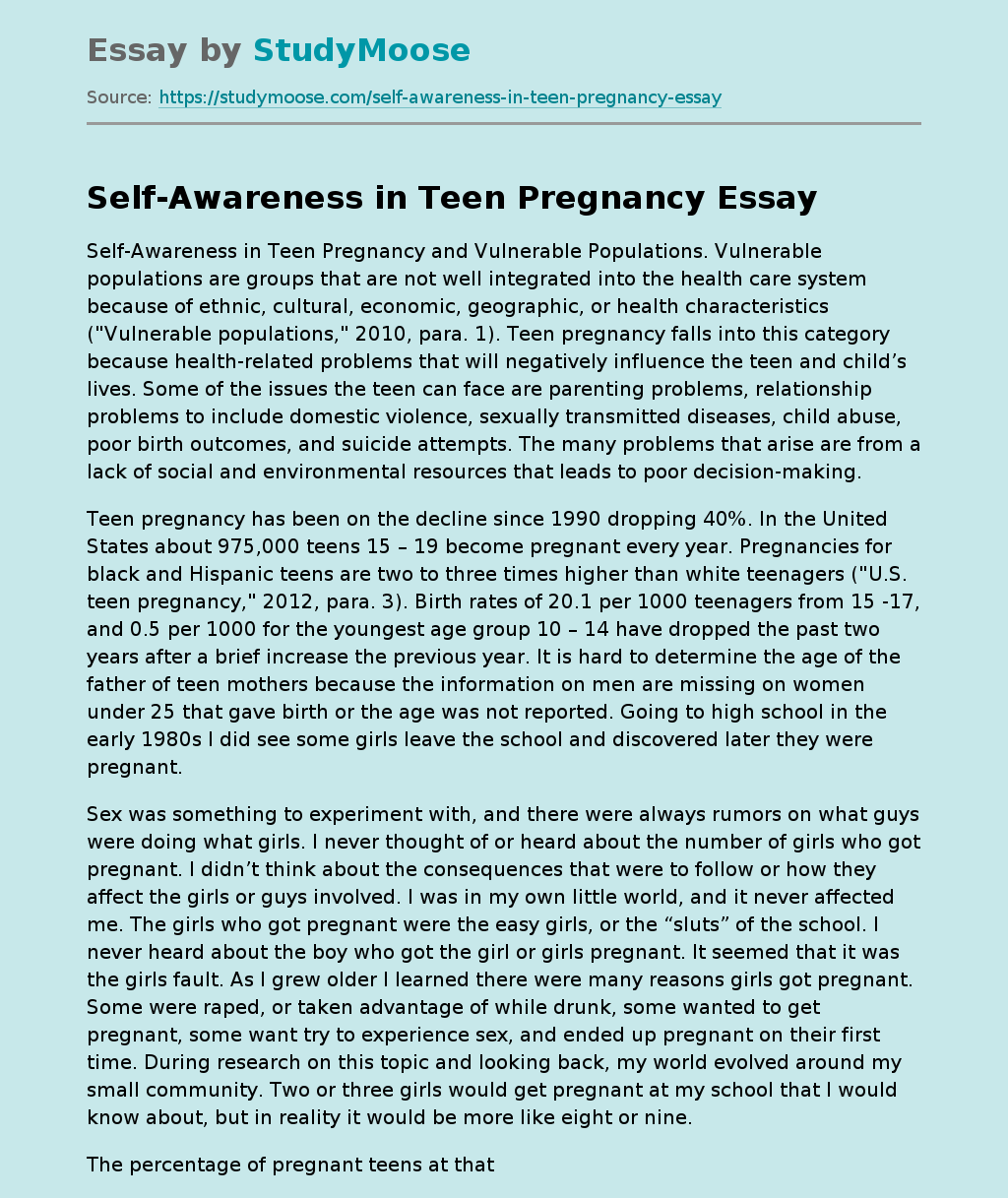