How To Prevent Teen Pregnancy?

How to prevent teen pregnancy has been a question for many years now. Statistics have been running wild trying to keep up with the teenage generation. Many people have their opinions on the subject (teen pregnancy), because teens seem to be getting pregnant all so fast these days. People fail to realize that having a baby is supposed to be a sort of privilege. Many people take having a baby as a joke. Getting pregnant and having a child involves many pros/cons.

Turn in your highest-quality paper
Get a qualified writer to help you with
“ How To Prevent Teen Pregnancy? ”
Get high-quality paper
NEW! AI matching with writer

For example having a child can be harder on some people than it is on others. When having a baby there are a lot of things to worry about, for the most important part financial problems seem to be the most talked about of teen pregnancy’s. In the prevention of teen pregnancy there are many things that are helpful. For example Abstinence is a for sure factor of not getting pregnant. There are also other helpful ways to help prevent teen pregnancy, such as sex education and birth control.

All of these things are essential in the helpful prevention of teen pregnancy.

Abstinence is when you give up something you desire or of pleasure to you. Abstaining from sexual activities is a great way to prevent teen pregnancy, and the risk of getting a disease. In the past years less sex and more condoms use has meant lower rates of teenage pregnancy and sexually transmitted disease. Abstinence is not a crime, as most teenagers and their peers seem to think.

Abstinence is very important, but the peers your child hangs around are just as important. ” The Nurture Assumption ” says that peer groups matter a lot more than parents influencing how kids turn out, because you can pass your genes, but not your values. CDC’s National Survey of Family Growth stated that teens are having less sex. CDC’s also stated that more teenagers surveyed that their closest friends were involved in some sort of sex education class, and they were not sexually active. Abstaining from sex and learning more about sex are good ways to assure your knowledge and decrease teen pregnancy.

Sex education is the study of the characteristics of being a male or a female. Such characteristics make up a person’s sexuality. Traditionally children have received information about sexuality from their parents, church, friends, their doctors, and many other people. Many young teens learn about their bodies first. They learn their body part and why they are essential for the body to keep going each day. Many people believe that sex ed. being taught in schools assures children of correct and complete information about sexuality. How sex education is taught varies greatly from on program to another, whether in school or any other program. Sex education starts in kindergarten and continues through high school. From kindergarten through 4th grade, sex ed. teaches children about their bodies and attempts to promote a whole some attitude toward the self-development process. During these years teachers attempt to correct any false ideas children may have learned about sex.

In the grades 5th through 6th teachers try to prepare students for puberty. For example, the children learn about nocturnal emissions, menstruation and changes that will take place in their bodies, they also learn and study reproduction. From grades 7th through 9th most young adults interest in sex increases, so they learn more about responsibility, and boy/girl dating. In high school, students learn more about the social and psychological aspects of sexuality. Many other subject come up at this time in a teenagers life, such as marriage, abortion, homosexuality, birth control, and many other topics. Through the teenage years there are a lot of things to be learned and taught, but the most focused on is birth control as stated by John J. Burt, Ph. D., Dean, College of Health and Human Performance. Sex education is of much importance to the teenage generation.

Birth control is the control of birth or of childbearing by deliberate measures to control or prevent conception, contraception. An understanding of birth control requires some knowledge of human reproduction. About every four weeks, an egg is released by one of the two ovaries in a woman’s body. The egg then passes through a fallopian tube, and if not fertilized while in the fallopian tube, it eventually disintegrates in the uterus. The egg then passes out of the body during a women menstruation. Sexually, coming from a man millions of sperm are released into the woman’s vagina. If an egg is there sperm traveling through a woman’s fallopian tube will fertilize it fertilized by the sperm. At this point a human being develops and nine months later a child is born. Most birth control methods are made to prevent contraceptives.

The most effective contraceptive method is surgical sterilization. This is when surgery is performed so it will block the spermducts in men or the fallopian tubes in women. There are also many other kinds of contraceptive methods; they involve hormone drugs in order to prevent pregnancy. In many developing nations hormone drugs are injected into the body. These injections must be given every 90 days in order to be effective. Some of the more popular birth controls today are the pill, condoms, Norplant, and the shot.

How To Prevent Teen Pregnancy?. (2016, Jul 03). Retrieved from https://studymoose.com/how-to-prevent-teen-pregnancy-essay 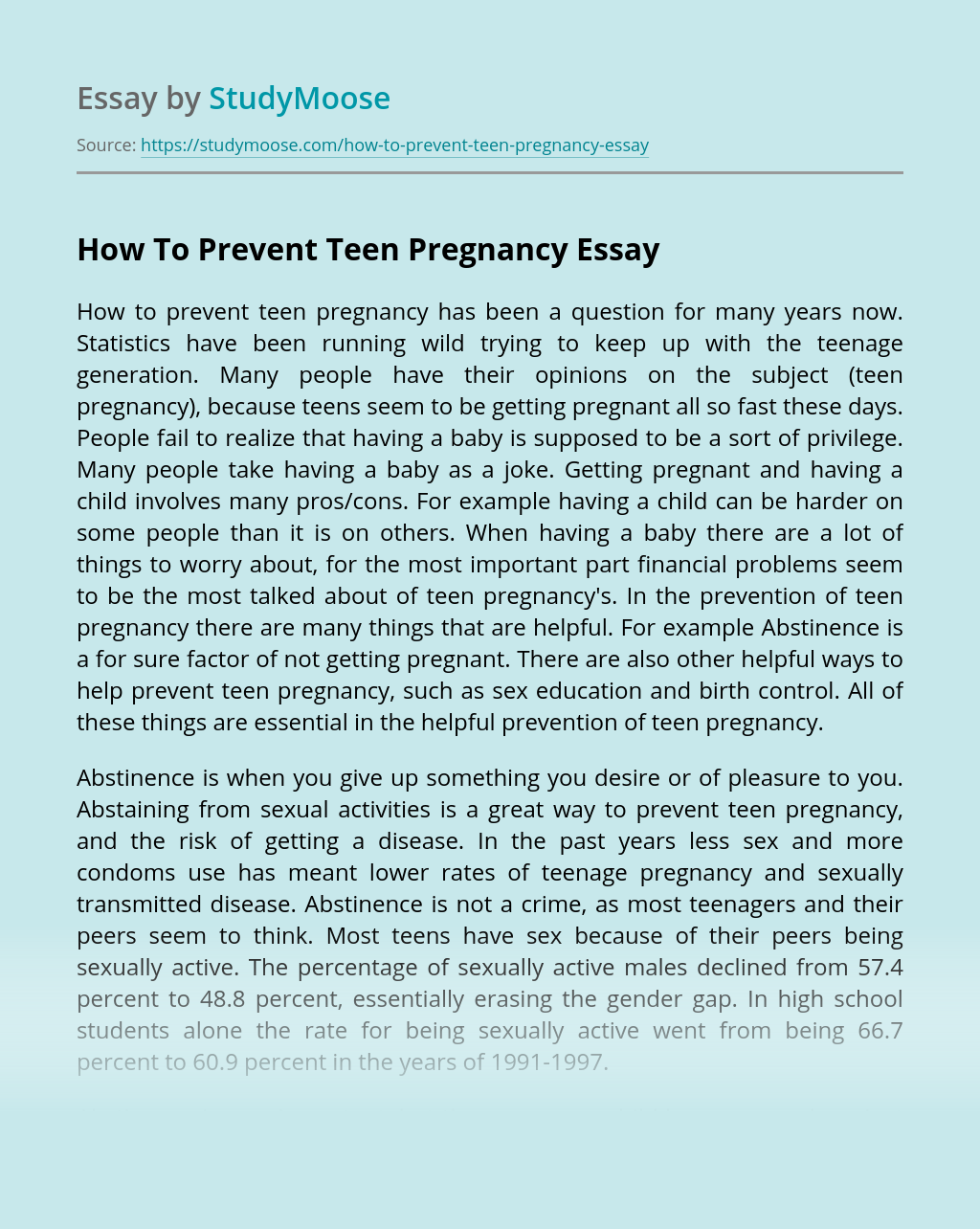 Turn in your highest-quality paper
Get a qualified writer to help you with
“ How To Prevent Teen Pregnancy? ”
Get high-quality paper
Helping students since 2015
Stay Safe, Stay Original