Seventeen-year-old Amber is from Santa Ana, California. The life-changing situation she describes is her unplanned pregnancy. On November 2011, she gave birth to a baby boy. As a result, she dropped out of high school and got a job to take care after her infant son. She now faces many challenges.

Teen pregnancy rate is high. “United States rates are twice as high as in England and Wales or Canada, and eight times as high as in the Netherlands or Japan.” (americaspromise) Three-quarters of a million teens between fifteen and nineteen become pregnant each year.

Turn in your highest-quality paper
Get a qualified writer to help you with
“ Teen Pregnancy as Lack of Sex Education ”
Get high-quality paper
NEW! AI matching with writer

The term in everyday speech usually refers to girls who have not reached legal adulthood, which varies across the world, who become pregnant.” (Unicef)

One major cause of teen pregnancy is the lack of sex education. First, people expect teens to educate themselves on sex, but that not good enough because their minds will only acquire information they choose to retain. Majority of the time teens make unsuitable decisions on whether or not to engage in sex because they obtain false information from friends, movies, or videos.

(Livestrong) Secondly, lack of communication between teenagers and their absentee parents is crucial because it is the parent’s responsibility to educate their sons or daughters on the biological and emotional aspects corresponding sex.

(Unicef) Thirdly, sex education programs vary widely between individual schools, districts, and states. Some states only require schools to educate abstinence programs. According to National Conference of State legislatures, as of March 2013, “ 22 states and the District of Columbia require public schools to teach sex education,” (Statelegislature) this means not every teenager is being given the opportunity to learn about sex. Last, but not least some teens are being informed on sex, but not contraception. One-third of American teens claimed they weren’t learning about contraceptives during sex education classes. (aolnews)

A second major cause of teen pregnancy is peer pressure. Peer pressure can come in many forms. For instance, according to Adolescent Substance Abuse Knowledge Base 30 percent of middle school and high school teens are offered drugs. The National Household Survey on Drug Use and Health from the U.S. Department of Health and Human Services states that 74.3 percent of high school students have encountered alcohol. Kaiser Foundation also states that 50 percent of teenagers were pressured into having a sexual relationship. (Famfirstaid) Also, transitions from adolescence to teen sometimes produce unstable emotions to some teenagers triggering adolescent sexual behavior. The insufficient love and affection from families during this stage provokes them to look for love and attention from the opposite sex. Lastly, for teenagers popularity and a circle of friends are really important. They care more about what people think about them and their appearance that they tend to do everything to be accepted.

In addition, sexual abuse also causes teen pregnancies. There is a significant connection between childhood abuse and teen pregnancy. It is stated that 60 percent of teen girls’ first time pregnancies are associated with previous rape and molestation experiences and as the direct result of rape 20 percent of girls become pregnant. Research findings compared sexually and non-sexually abused teenage girls’, which showed “the average age of first intercourse for abused girls is 13.8, in contrast to the national average of 16.2.” (Feministe) According to David Finkelhor, Director of the Crimes Against Children Research Center, during the course of their lifetime, 28% of U.S. teenagers between ages 14 to 17 have been sexually victimized. Sexually abused teenagers are more likely to have sex earlier than their peers, have a great amount of partners, be re-victimized and have older sexual partners. (Unisef)

One negative effect of teen pregnancy is financial instability. Teenage mothers who fail to complete their high school education have difficulty gaining employment. In most cases if they do find a job they most likely get paid the minimum wage. Medical care costs is also problem teenage girls come across. “The cost of maternity care and birth, without complications, averages between $9,000 and $17,000”. Without insurance they have to pay out of pocket. Aside from medical costs childcare is expensive, on average they are paying about six hundred to a thousand dollars per month for one toddler depending on where they live. Not to mention the financial burden of baby necessities such as diapers, bottler, wipes and formula. In the end, teenage parents face so many economic hardships that over 85% of them end up on welfare due to financial debt. (financial)

Another negative effect is medical complications. “Teenage pregnancy is associated with higher rates of illness and death for both the mother and infant.” The younger the mother, the greater chance to have medical risks for both mother and baby. Teenage girls experience several complications such as placenta previa, pregnancy hypertension, premature delivery, prolonged labor and miscarriages. Not only that but due to the amount of stress they usually develop post-partum depression. Consequently, “infants born to teens are 2 – 6 times more likely to have low birth weight than those born to mothers age 20 or older.”(national) This increases the probability of the infants suffering from death, blindness, deafness, chronic respiratory problems, mental retardation, dyslexia, and hyperactivity. “Complications of teenage pregnancy result in the deaths of an estimated 70,000 teen girls in developing countries each year.”(Wikipedia)

The final negative effect of teen pregnancy is life outcomes for mother and child. “Thirty percent of all teenage girls who drop out of school cite pregnancy and parenthood as key reasons”. According to the National Conference of State Legislatures, only about forty percent of teen mothers are high school graduates and (Statepolicies) Also, thirty four percent of former teen mothers, did not earn a high school diploma or GED and less than 2 percent finished college by age 30. In the course of a lifetime, a teenager who graduates college will earn, on average, $1 million more than a high school dropout. Without an education a teen mother is less likely to succeed. Moreover, research shows that “children born to teen mothers start school at a disadvantage and fare worse than those born to older parents.” For instance, those children begin kindergarten with lower levels of knowledge, compared to children born to women in there twenties. In addition, to that a child of a teen mother is more likely to grow up without a father, be a victim of neglect or abuse and be a become a teenage parent as well.(Unicef/Americas Promise)

In conclusion teen pregnancy is a major issue that we should try to be prevent as much as it possible. As previously stated, teen pregnancy is caused by lack of education, peer pressure, and sexual abuse. These causes have resulted teens in financial instability, medical complications, and difficult life outcomes. I think as a community and as parents we can prevent teen pregnancy if we take the initiative to do so. Teens are not fully ready to become adults, yet they are forced to grow up making irresponsible decisions. Remember that we’re not here to be a child’s friend we’re here to teach and give teenagers a better understanding that every cause has an effect, and that a teenage pregnancy can and will affect their future. 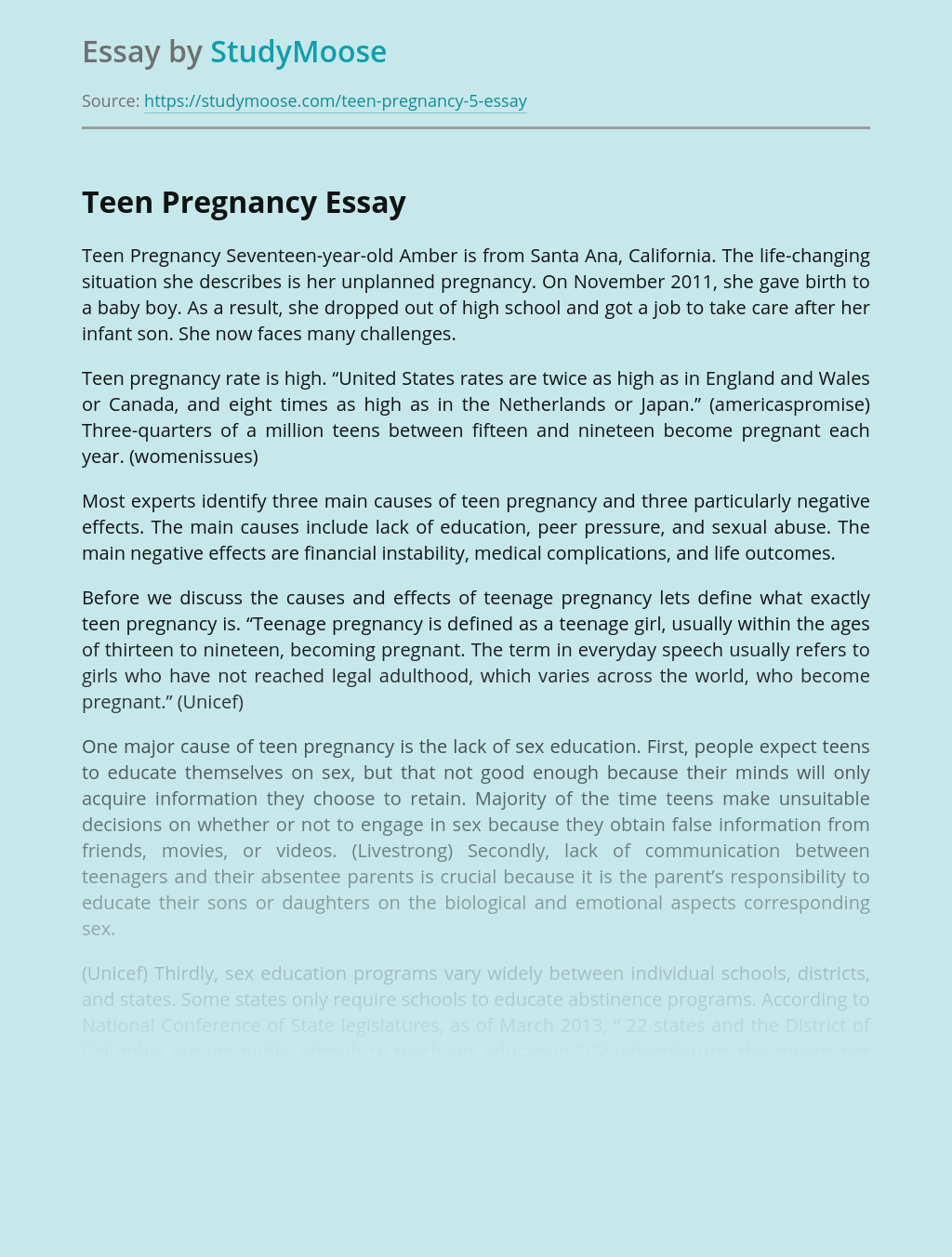 Turn in your highest-quality paper
Get a qualified writer to help you with
“ Teen Pregnancy as Lack of Sex Education ”
Get high-quality paper
Helping students since 2015
Stay Safe, Stay Original