In the 1820’s and 1830’s, the Jacksonian Democrats, with Andrew Jackson as their leader, viewed themselves as the guardians of the Constitution, political democracy, individual liberty, and equality of economic opportunity. However, this view did not truly represent the actions taken by President Andrew Jackson and his followers, it was only a façade put up to mask their sectionalist ideas.

One of the disparities in the views and actions of the Jacksonian Democrats involved social equality. Jackson repeatedly held sectionalist views and did things that were better for the average, poor community than for the country as a whole.

Don't use plagiarized sources. Get your custom essay on
“ Jacksonian Democrats DBQ ”
Get custom paper
NEW! smart matching with writer

One such example of this is shown in Documents B and C involving the National Bank. In his National Bank veto message in Document B, Jackson says, “It is to be regretted that the rich and powerful too often bend the acts of government to their selfish purposes.” Jackson singles out the wealthier class and accuses them of being selfish. Because this ridiculous comment has no intelligent purpose other than to create an enormous, nationwide class clash, it must be seen as evidence that Jackson was a sectionalist.

Jackson’s actions show that his primary goal was not to help the country, but to address his own personal issues. This completely contrasts the Jacksonian Democrats view of themselves. The Jacksonians thought that they were acting in the best interest of the country, where they were truly thinking about their own needs.

The Constitutional rights of the people were also violated during the Jackson presidency. In Document F, we see that South Carolina had resolved that fellow states would make it a crime to print, publish, or distribute anything that was anti-slavery. They did this because slavery was their economic backbone, and without it, their economy would plummet. South Carolina was requesting that a sectionalist opinion be enforced over a constitutional right. If Jackson was really what he claimed to be, he would have rejected this request. However, he willingly violated the Constitution and abused his Presidential power when he told Postmaster General Amos Kendall to censor all of the mail.

Next, in Document G, we see a painting that shows what happened to the Native Americans during the Trail of Tears. Earlier in Jackson’s life, he was a General for the American army. His most notable campaigns were the wars with the Seminole Indians. Jackson had a strong hatred towards the Seminoles when he was a General that carried over to his presidency. His decisions and treaties to force the Native Americans out of their land show that he only had his agenda in mind and that he was a true sectionalist. These actions violated one of the fundamental Constitutional rights that our country was founded on, freedom.

The Jacksonian Democrats view of themselves was not entirely accurate because of the class issues and disregard of the Constitution during Jackson’s presidency. Jackson forced the Native Americans out of their land, repeatedly created class clashes, and held sectionalist views. The principles behind these actions were the antitheses of those that this country was founded on. This not only shows the hypocrisy of the Jacksonian Democrats, but it proves that they did not accurately view themselves. 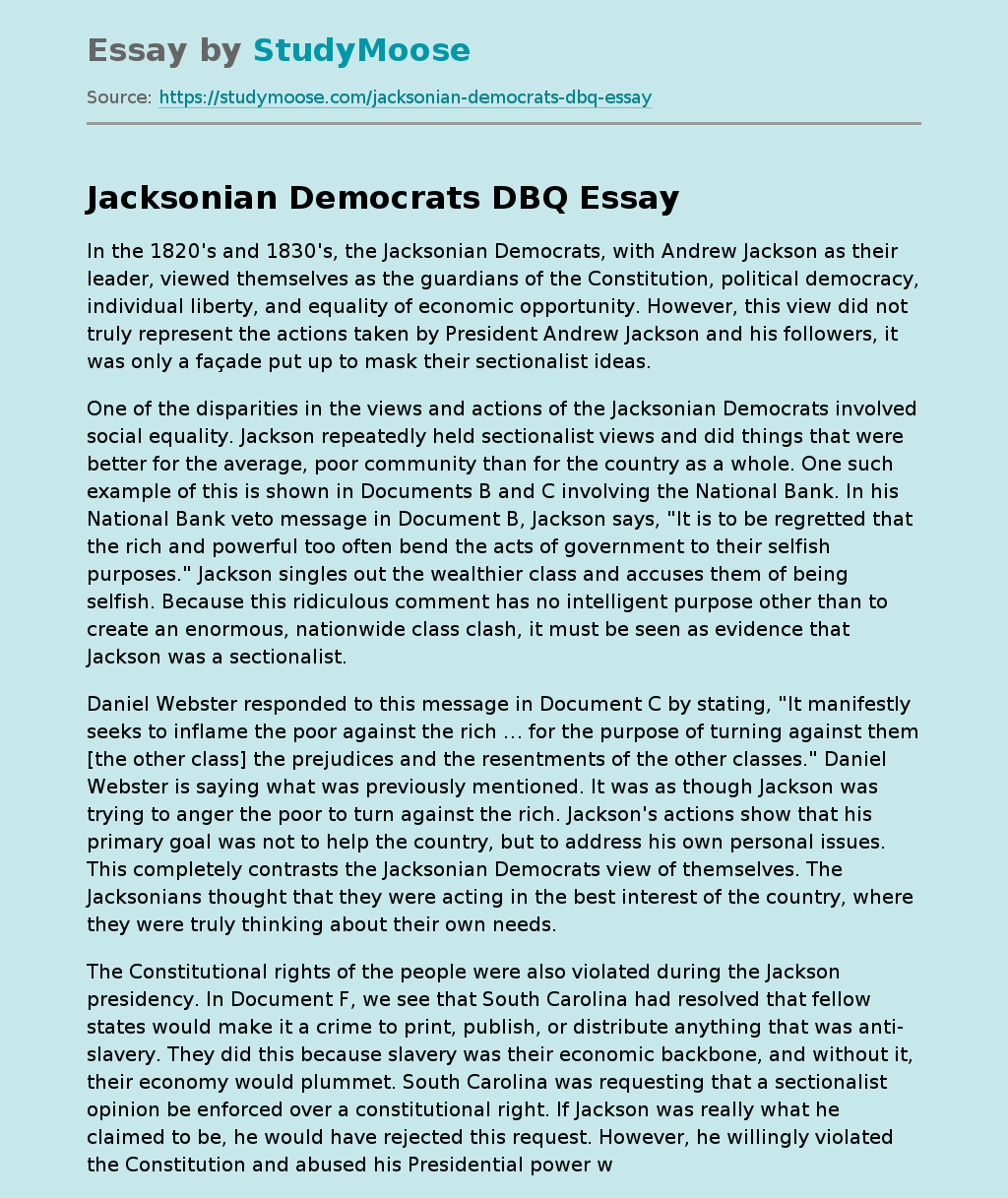