Thomas Jefferson and Andrew Jackson were two influential political figures in two very different eras, ranging from 1800-1808 and 1808-1840 respectively, that established two very different political philosophies. Each formed their own system that helped shape the way people think about American government. Liberalism is a political philosophy that goes against the established status quo at the time in order for change, where as a conservative is one which adheres to principles established by that same status quo. The Jeffersonian Republicans image of the common man was one vested in the educated and independent farmer, who by no stretch of the imagine had the capabilities to serve in government.

Don't use plagiarized sources. Get your custom essay on
“ Jeffersonian Republicanism vs. Jacksonian Democracy ”
Get custom paper
NEW! smart matching with writer

The Jacksonian Democracies image of the common man expanded from farmers to include laborers, planters, and mechanics. Jackson saw these people as the true representatives of the Government, and thus its true servers. The image of the common man for each the Jeffersonians and the Jacksonians differed in the fundamental principle of the true chosen class, and its real role in Government.

Although Jeffersonian Republicanism established a more liberal status quo in comparison with the old Federalist policies, Jacksonian Democracies conservative maintenance of Jeffersons status quo did more to assist the common man in regards to the political, social, and economic aspects of his era.

In contrast to the Jeffersonian era, Jacksonian democracy promoted the strength of the executive branch and the Presidency at the expense of Congressional power, while also sought to broaden the public’s participation in government. The belief in a weak national government was held by the Jeffersonians; they contended that government officials who used their powers too much were in fact abusing them (Ambiguous Democracy in America, 1800-1848).

In Jeffersons time the two highest voted candidates became the President and the Vice-President of the United States. Jeffersonians believed more in the power of legislature, because it was a type of power given to the educated masses. Jacksonians however, believed in universal white manhood suffrage, rather than just the propertied class being able to vote, and supported the patronage system that enabled politicians to appoint their supporters into administrative offices, arguing it would reduce the power of elites and prevent aristocracies from emerging.

In the age of Jackson, a candidate was chosen by a nominating convention and the President and Vice-President ran for their offices separately. The people demanded elected (not appointed) judges and rewrote many state constitutions to reflect the new values. Jackson saw no reason not to use force to achieve his goals exemplified in his handling of the Nullification Crisis of 1832, with the passing of the force act to force any law necessary (Brinkley, Alan, and Davis Dyer). Jacksonians believed in a stronger government, but it was a type of self government. In this system of beliefs, the president was considered to be a representative of the people, and thus he found no reason in his mind not to veto a law which he did not see fit. Jackson used Jeffersons policies to bring into fruition the ideals of the true common man in government.

While Jeffersons ideas of social mobility reflected a growing sense of equality for all classes, Jackson established his idea of the true chosen class, and specifically geared his policies of social mobility towards this. Jefferson doubted that white civilization and Indian savagery could coexist and although he said that men were born to freedom, not to slavery, he still held many slaves. He felt strongly that women had a single purpose in life: marriage and subordination to a husband. Jefferson saw no reason to let them vote since women were never called upon to discuss politics. One of the many bills Jefferson proposed was the Bill for General Education, which allowed everyone to have as much free education as each person was fitted for (Cunningham, Noble E.). Jefferson believed education would be the cure of all evils.

In the same manner, Jackson veered away from extending equality to slaves and women received little betterment, although many reforms were taking place in the time of the Jacksonian Democracy. Jackson forced thousands of Native Americans to march from Georgia to Oklahoma on the infamous Trail of Tears with his Indian Removal Act, thus showing his hatred for the Native Americans (Brands, H. W.). Jacksonians opposed programs such as educational reform and the establishment of public education. They believed that schools restricted individual liberty by interfering with parental responsibility. The importance of the Jacksonian Era was not that the gap between rich and poor had narrowed, but that there were now few barriers that prevented people from gaining wealth and power. Because Jackson eradicated the Indian threat (a major concern for common people), and belittled the importance education, his party symbolized that a man could come from nothing, and become president, which was a source of inspiration and hope for the common man.

Both Jefferson and Jackson did what they felt would economically benefit the common man however Jeffersons maintenance of the Hamiltonian economic system, which benefited the upper class, did less for the common man then Jackson, who advocated for the ideals of economic success for all. Jefferson encouraged State banks and was originally opposed to the national bank, however once in office he saw the true benefits of such a bank. Jefferson feared the consequences of industrialization, and thus didnt support it. In Jeffersons government corporate charters were granted to favorites of state legislators & often implied monopoly rights to a business, thus the common man had no chance for economic success. Jackson won the Bank War by having federal income deposited in state banks, while he continued to draw money out of the national bank by putting it into his state (Wildcat) Banks, because he saw the bank as a tyrannical source for the wealthy (Feldmeth, Greg D).

Jacksonians accepted industry as essential to American economy, and thus further supported the common man. Jacksonians believed that corporate charters should be available to all who chose to risk starting a business, and thus anyone could make money (Jeffersonian & Jacksonian Democracy Comparison). This idea was exemplified in the Charles River Bridge v. Warren Bridge decision on corporate monopolies. Both mens ideas cause a state of relative economic turmoil, however each was generally looking out for the common man. Jeffersons policies however were still partially geared towards the elite, and thus do not help the common man as much as Jacksons economic system, which was entirely geared towards the common man.

The Jacksonians embodied the American spirit, and so perfectly displayed the ability to climb from the very bottom to the very top. Jacksonians personified hope in a nation where hope was desperately needed. The growing lower and middle classes fought endlessly for their rights, which were continually denied by those in power. Jackson knew the plight of the poor, and during his administration, he made many efforts to return the country to the people. Both Jeffersonian Republicanism and Jacksonian Democracy were based on the beliefs in the freedom and equal rights of all men. However, Jacksonians acted more thoroughly on these ideas. While these two men essentially shared many of the same beliefs and ideas, there was a noticeable difference to how they acted on them and spoke out about them. Thus it can be seen that Jacksonian Democracy advocated more for the common man than Jeffersonian Republicanism. 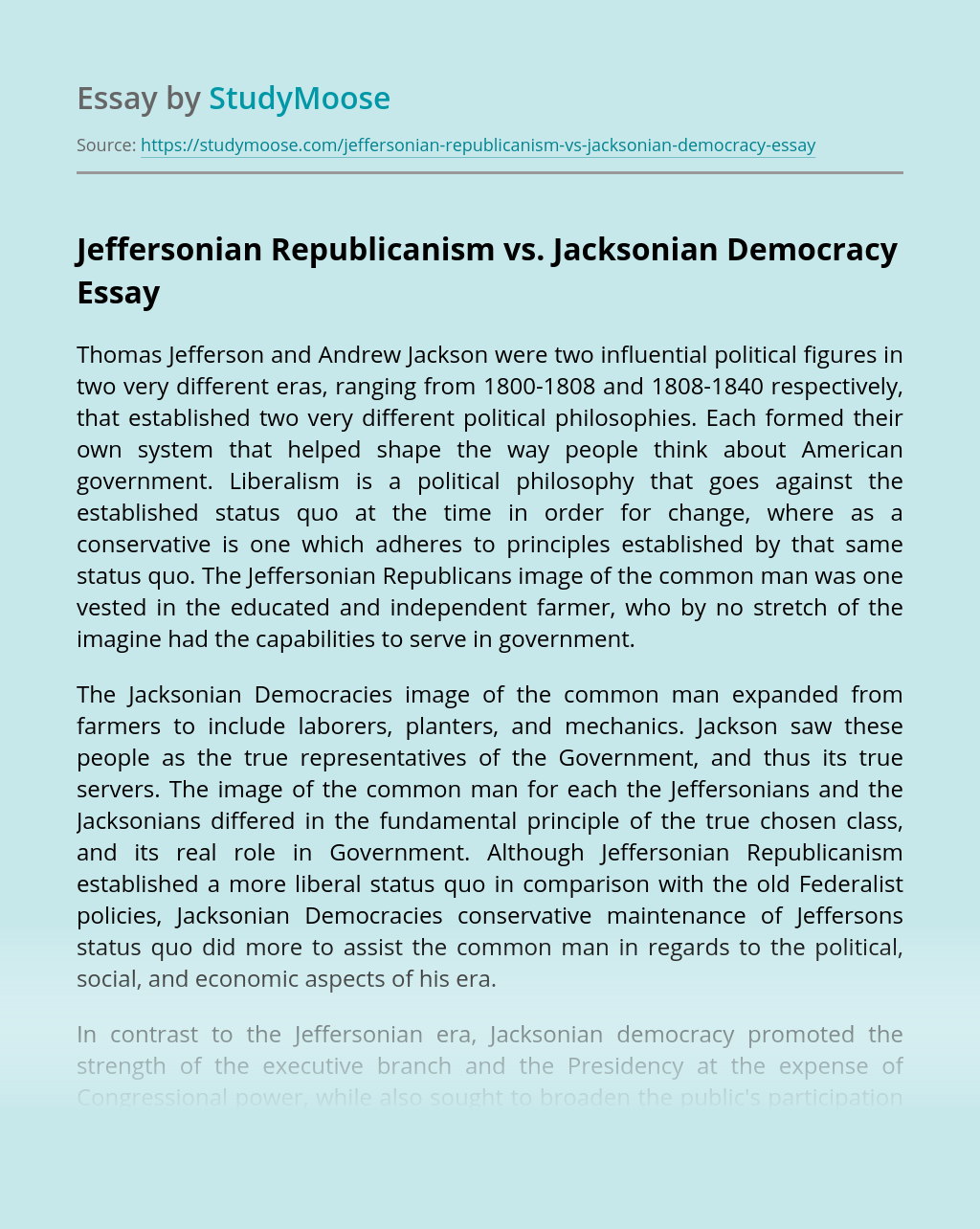