In the early days of the United States of America when the country was beginning to grow under the newly ratified Constitution, there were two main political parties in existence, the Federalists and the Jeffersonian Republicans. From the time period of 1801-1817, the two presidents that were elected to rule the U.S. were Thomas Jefferson and James Madison. Both Jefferson and Madison were Jeffersonian Republicans who were characterized as strict-constructionists in respect to the federal constitution before they each took the office of the presidency, but when they took office the public found out that Jefferson and Madison’s previous characterizations had not been very accurate when, as president, they began to act like the opposite of what they originally believed in.

Jefferson also argued for a Bill of Rights in the Constitution. In a letter to James Madison Jefferson called for a Bill of Rights because it provided “freedom of religion, freedom of the press, protection against standing armies, … and trials by jury in all matters triable by the law.” In 1800, Jefferson, along with Madison, wrote the Kentucky and Virginia resolutions to campaign against John Adams after the Alien and Sedition acts were passed. The Kentucky and Virginia resolutions proved Jefferson’s strict-constructionism by combating the Federalist theory of a government’s “implied powers” and they were written to stop the expansion of power of the government after they had passed two unconstitutional laws.

In August of 1800, Jefferson once again expressed his previous beliefs of strict-construction in a letter to Gideon Granger; Jefferson said that America could never be in a state of harmony if citizens “support principles which go directly to a change of the federal Constitution.” Because Jefferson believed that the Constitution should be interpreted strictly, he thought that if laws were to keep being passed that went over the Constitution, the government wouldn’t be able to run smoothly, and many problems would arise because of the power that the government would gain. Jefferson also believed in the separation of church and state, and in a letter to Samuel Miller in 1808 said the “government of the United States as interdicted by the Constitution from intermeddling with religious institutions, their doctrines, disciplines, or exercises.” Although this took place in the last year of his presidency, Jefferson was reverting back to his old beliefs in strict-construction when he spoke for the feature of separation of church and state.

The American people had every reason to believe that when Jefferson took office, he would be the same Jefferson of previous years, and enact his own beliefs through the office of the president. In the very beginning of Jefferson’s presidency, the common people were right on as Jefferson nearly abolished the entire army of the U.S. and feuded with the power of the Supreme Court. But Jefferson went through a change and shocked the public by keeping Hamilton’s economic policies in place, such as the National Bank. Jefferson had argued against these policies only a few years before. Although the Constitution never said the government could have a national bank, Jefferson still kept it in place, which changed his stature from strict to loose construction. Jefferson next loose-constructionist move was the Louisiana Purchase. Nowhere in the Constitution did it say that the government could buy land from another government, but Jefferson, feeling the pressures of his office, went against his old morals and bought Louisiana from France.

Jefferson realized that it is nearly impossible to be a successful president and still keep all of his old beliefs intact. Jefferson wrote a letter to Samuel Kercheval in 1816, a few years before his death, where he recognized that a shift in beliefs was necessary at times because although he was “certainly not an advocate for frequent and untried changes in laws and constitutions… laws and institutions must go hand in hand with the progress of the human mind.” Jefferson found out that when he became president his actions and beliefs must keep up with the changing of the times. When Jefferson became President, he ruled in the way a traditional loose-constructionist would have done.

James Madison, also known as the “Father of the Constitution,” was another strict-constructionist whose actions during his presidency contradicted his beliefs before he was president. Before Madison was president he was a strict-constructionist Jeffersonian Republican. Madison wrote most of the Constitution and later added the Bill of Rights. Madison also took part in the Virginia and Kentucky resolutions along with Jefferson. Madison said that “wherever the real power in a government lies, there is the danger of oppression.” Madison said that if a government was given too much power, the government could become an oppressive force, but if the Constitution were to be strictly followed, there would be no danger of the government gaining too much power.

James Madison was elected in 1808, and took office in 1809. Madison found out also that previous beliefs are hard to keep when one is President of the U.S. Madison’s administration had enacted a draft to rebuild the army that Jefferson had gotten rid of, but may were opposed to this such as Daniel Webster, who said that if the government had the right to draft men “into the regular army… he will at any time be able to prove…that Congress has power to create a dictator.” Madison had originally feared a government with too much power, but he gave the government a power that, in the eyes of the people, was to close to that of a dictator. When the government proposed the Tariff of 1816, John Randolph, a Democratic Republican congressman from Virginia, said in a speech to the House of Representatives that Madison’s “principle now is old Federalism, vamped up into something bearing the superficial appearance of republicanism.”

Randolph was saying that although Madison claimed to be a Jeffersonian Republican, he was running the country like the old Federalist Party. After this pressure was building up and Madison was being called a Federalist, he responded by vetoing the Bonus Bill, which called for internal improvements in America, proposed by John Calhoun because he said “such a power is not expressly given by the Constitution.” Madison had followed strict-construction in the decision to veto the Bonus Bill, but it resulted in a loss for the country. Madison also found out, like Jefferson, that the office of the presidency shapes the man.

Both Thomas Jefferson and James Madison found started out characterized as strict-constructionists of the Constitution, but when they took the Presidency, they found out that it was hard to keep up with their own beliefs. The both took actions that contradicted their original ideas. The original characterization of Thomas Jefferson and James Madison proved to be not very accurate during their presidencies. 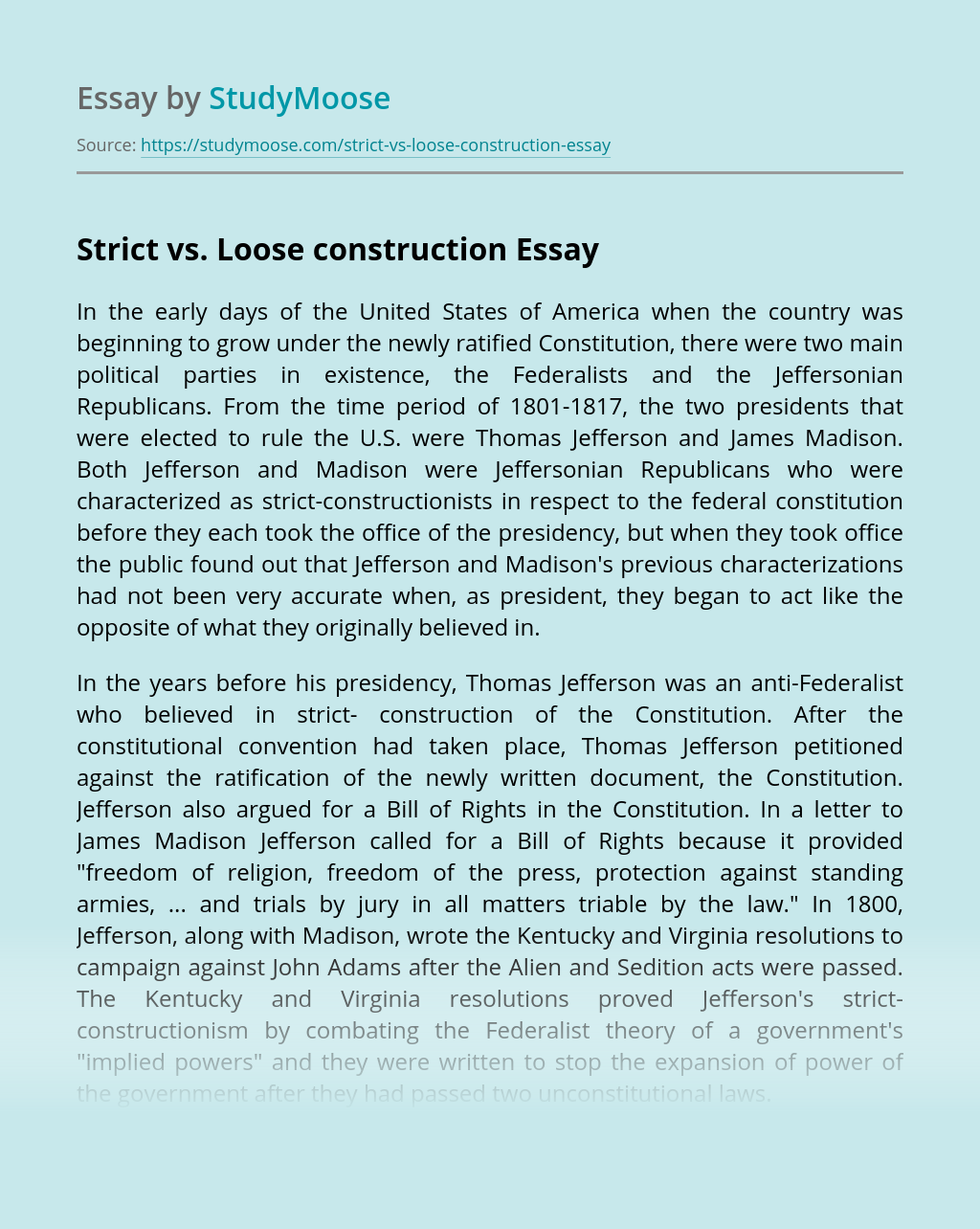 Don’t waste time
Get a verified writer to help you with Strict vs. Loose construction
Hire verified writer
$35.80 for a 2-page paper
Stay Safe, Stay Original