There can be no daily democracy without daily citizenship

The term democracy can be simply described as a “rule by the people”. In broad terms, democracy is the fundamental ideology which has basic principle that the citizens or subjects of the entire nation must be given imperative status. That is ‘‘the will of people’’. In other terms, democracy entails giving broad rights to people in all three main spheres—social, economic, political, equality and freedom to all irrespective of their relation, skin colour, culture and language.

Don't use plagiarized sources. Get your custom essay on
“ There can be no daily democracy without daily citizenship ”
Get custom paper
NEW! smart matching with writer

In this sense, we can say that democracy have a comprehensive factor as it gives value to all people irrespective of their religion, culture and language. We can therefore conclude that there is a relationship between democracy and citizenship but both ideologies operate on different logics and produces different results. On the other hand, citizenship can be defined as a series of responsibilities that pertain to individual as an associate of a political society including social, political, civic and economic rights and obligation.

In a free society, there is saying that goes, ‘‘you get the government you deserve’’.

This means that for democracy to be successful, all citizens must participate actively and not passively because they are aware that the success or failure of the government comes from their responsibilities and daily involvement. In turn, government executives apprehend that all citizens need to be treated fairly and equally and that corruption has no place in government.

Unlike a authoritarianism, a democratic government subsists to serve the citizens, but people in a democratic state must also accept to abide by the obligations and rules that govern them.

These rules are made by the governing body and failing to abide by rules means disrespect to the authorities/government. Democracy gives freedom s to citizens including freedom to criticize and dissent the government. Democratic citizen should understand that do not only have the right but also responsibility and that democracy call for an investment of hard work and time. In simple terms a government of people requires constant s attention and support by citizens.

In democratic government, public participation means that people are required to participate on juries, or provide compulsory civilian or military national service for a long period of time. Other commitments concern all democracies and are the only responsibility of the people. Paying taxes responsibly, valuing the rights of the citizens with differing perspectives and recognizing the authority of the ruling government, are some of the ideal examples of the citizen’s responsibility. Moreover, democratic citizens understand that they should bear the load of responsibility for their entire society if they want to benefit from its protection of their rights.

In a democratic society, who are not satisfied with their leaders are welcome to organize and peacefully make a case for the recommended change or can try to vote out those leaders at the approved time for elections. Democracies require more than a special vote from their people to stay healthy. They require steady commitment, time and attention of very large number their people who in turn rely on the government to protect their freedoms and rights. Moreover citizens in a democracy are free to join any political party and vote for their favorite candidate.

There can be no daily democracy without daily citizenship. (2015, Aug 08). Retrieved from https://studymoose.com/there-can-be-no-daily-democracy-without-daily-citizenship-essay 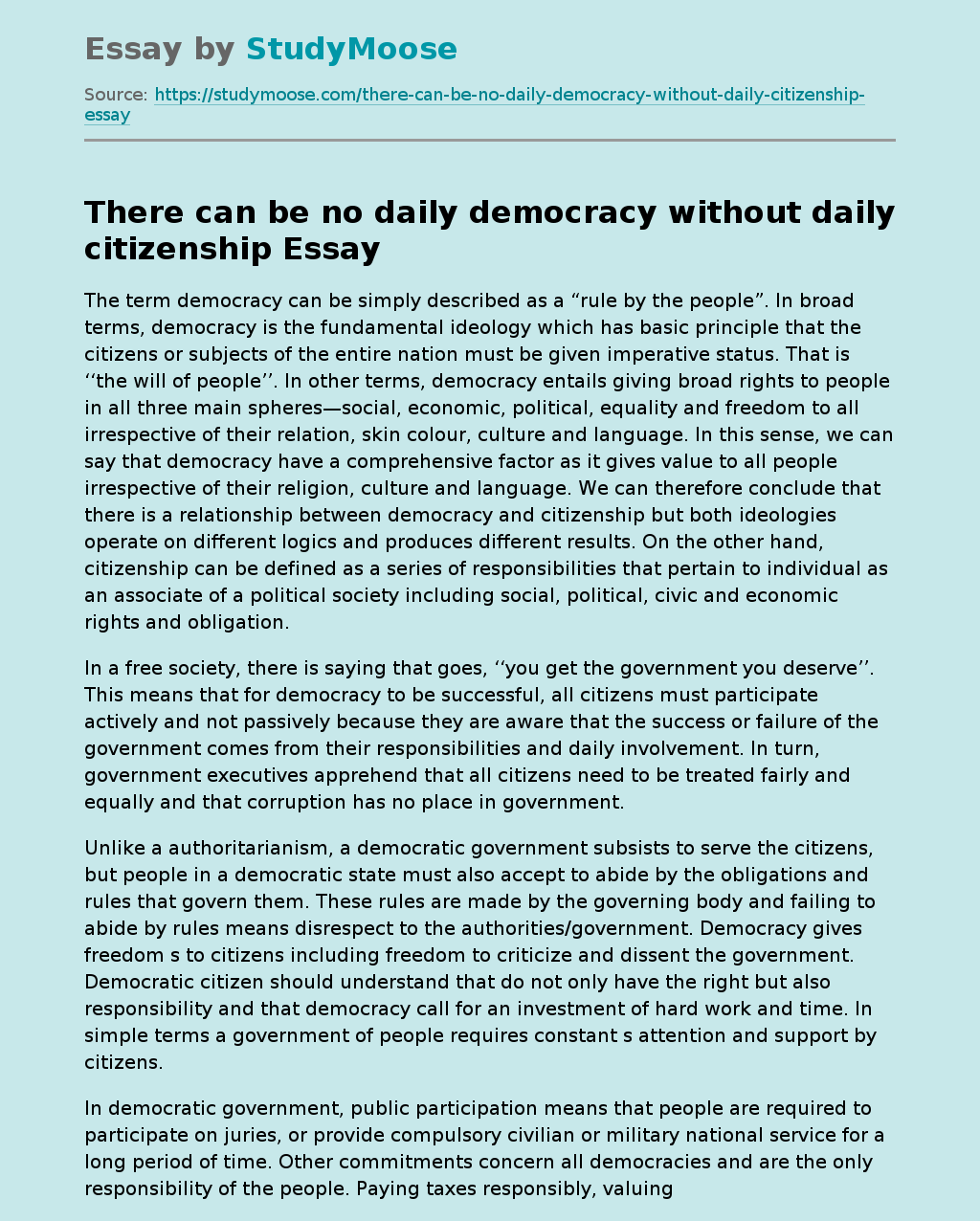