As far as we know, many people throughout the world face different issues such as global warmth, pollution of environment, gap between wealth and poverty, discrimination, suffering of HIV/AIDS and so on. Therefore, more and more people are attracted to join in one community and solve global problems together. Nowadays, many people can be considered as citizens of our planet, or as Global Citizens. The main goal of Global Citizens is to create such conditions and solutions to problems in order to make the world around them a better place.

Don't use plagiarized sources.
Get Your Custom Essay on Global Citizenship Just from $13,9/Page

All of them tend to have some specific qualities. I know enough people, who possess them and inspire me more to be a Global Citizen. Initially, I consider myself as a part of Global Community and as a Global Citizen because I try to help people that need it. For me, being a Global Citizen means not only enjoying our rights, but also bearing responsibilities and taking care for surrounding people and environment beyond one’s nation or territory, in order to create a virtuous society in the world.

Open-mindedness and willingness to commit good deals are the main qualities, which Global Citizen should have. Every person has different types of personality, some of them can make good teachers, some good creators, other good workers, and so on. Although they have different qualities and abilities, they are part of one community and take some responsibilities for surrounding people for making the world little bit better. Therefore, they can be considered as Global Citizens. They are joined by qualities such as kindness, love to every single person on the world, motivation to hard work, and responsibility for humankind. In addition, Global Citizens should have perseverance because the mission of being responsible for human beings faces many obstacles. Accordingly, Global Citizens should wish to improve lives of others and possess kindness, responsibility, and persistence. Global Citizens are not isolated from the world and think not only about themselves. People start to be such Citizens when they start to commit good deal toward strangers, who need help. No matter if they act alone or in teams, they are still Global Citizens.

Read more: The person I admire the most is my friend essay

I have met many people that act as Global citizens. For instance, I know people, who deal with children that have oncologic diseases, or people, who take some activities to decrease the level of HIV/AIDS sufferers, or people that engaged in charity, or other that engaged in special communities, which deal with different issues in society. I, firstly, admire with my grandmother, who has a small business, but always takes time and money to engage in charity for orphanage. In spite of facts that she is retired and cares about her children and grandchildren, she still work hard, has patience, and has desire to help other people, to make their lives better. This example proves that anyone can take even little action toward better humanity’s life and unintentionally become a Global Citizen. I believe, I will follow my grandmother’s example because from my childhood I am kind, responsible and strive to help people.

I always wished, nobody should be upset. Therefore, when I saw sad person, I approached to him/her, tried to understand situation and attempted to help. Later on, I become part of different communities such as School Parliament, International Organization “Dance4Life”, Students’ Community “Enactus”, and some others. Most of my time I spent in School Parliament, so I will tell more about its activities. This little school organization took responsibilities for almost all events in school and some activities outside it. We regularly took part in charity for orphanage, supported disabled people of our school, entertained people that had oncologic diseases, and conducted some events. We helped one family to collect some amount of money to child’s operation by selling some ribbons and conducting charity events few times. It was one of the biggest deals that we did in school time ourselves. After pupil’s operation, his parents thanked us and appreciated our activities. Thus, as studying in high school we started to participate in solving some problems outside of our lives, to help others, to improve surrounding people’s lives and performed as Global Citizens.

How and Why You Can Become a Global Citizen

Thereby, everybody can become a Global Citizen despite age, gender, and region. To be a Global Citizen means to take actions and fulfil some duties in order to improve someone’s life. Global Citizenship should not be focused on scale of an action because helping people starts from little steps, from helping even one unknown person. Therefore, most of people, who are helping others that need a support, can be considered as Global Citizens. The majority of these human beings understand that they somehow may effect on people, who live on the other side of the Earth. Thus, they think broadly and care about surrounding people and nature. 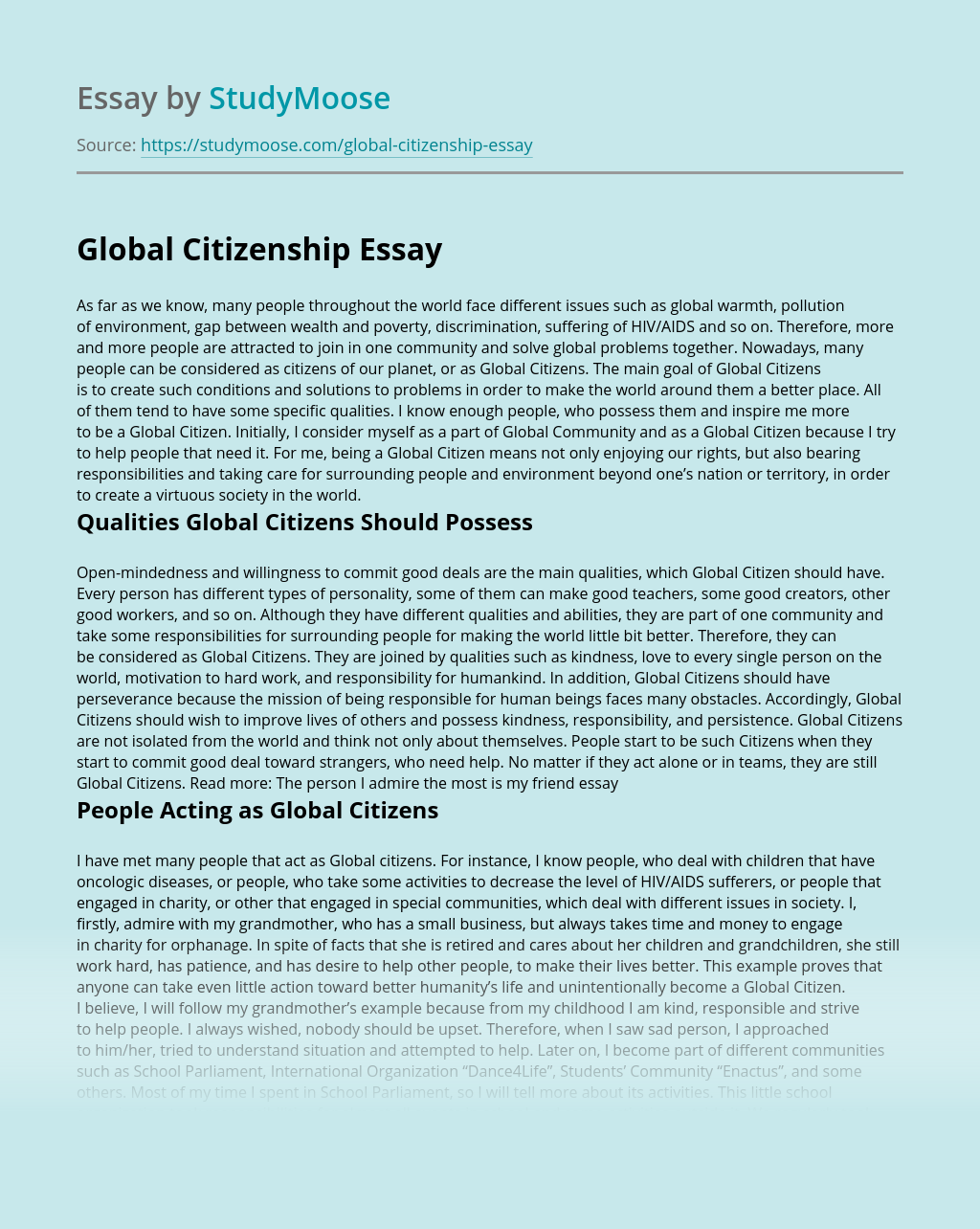 The case Thompson v. Oklahoma took place in 1988. William Thompson (15 year-old boy) killed his brother-in-law, who had been abusing his sister. The murder was not committed in state of temporary insanity, so the court considered it as first-degree murder and sentenced William Thompson to death. As far as the 8th and 14th Amendments...

Anton Drexlers establishment of the National Socialist German Workers Party in 1920, brought about the rise of Adolf Hitler who led the most significant German political party of the twentieth century. By famous historians such as Alan Bullock, the Nazi Party is regarded as an organized conspiracy against the State which pursued power and position,...

This would be a clear departure from Freud’s lengthy approach where the counselor would interpret the client’s story or life experience. Rogers believed, using empathetic understanding and unconditional positive regard people would have the potential given the proper tools to resolve their own problems. Rogers identified accurate empathetic understanding as another critical task of therapists....

The novel City Of Bones by Cassandra Clare follows the main character 15 year-old Clary Fray in her journey to discover her missing mom. Clare takes the normal Fairy Tail and turns it upside down. The essences that stick out to me in this movie is Love, Jealousy and bias. An important idea for me...