At the start of “Looking for Alibrandi”, by Melina Marchetta we are introduced to a seventeen year old girl by the name of Josephine “Josie” Alibrandi, who is in her last year of high school. By the end of the book it is made obvious that Josephine has gone through many dramatic and important changes, including achieving her emancipation, discovering her family secret, accepting her culture, and meeting, and having a relationship with her father, Michael Andretti. All of these changes, and others, help to shape the character of Josephine Alibrandi.

Turn in your highest-quality paper
Get a qualified writer to help you with
“ Looking For Alibrandi ”
Get high-quality paper
NEW! AI matching with writer

Throughout the year, Josephine talks of wanting to achieve her emancipation. ‘I’ll run one day. Run for my life. To be free and think for myself. Not as an Australian and not as an Italian and not as an in-between. I’ll run to be emancipated.” (pg40). Josie also wants to be free to make her own decisions, and she doesn’t want to care about what others are saying, like she does now.

Marco Andretti (left #26) and his father Michael A…
Andretti Autosport (then Andretti Green Racing) ow…
At the same time, she realises that she can’t escape everything. “If my society will let me.” (pg40). Josie thinks that part of her emancipation is to be free of her Italian background, which is not possible, because it will always be a part of her. She believes that it may stop her from achieving her emancipation. Soon Josie realised that the only thing that was stopping her emancipation was herself.

“Relief because I was finally beginning to feel free. From whom? Myself, I think.” (pg221). Josie realises that she is holding herself back from what she really wants, but she isn’t sure whether she wants to fight for it or not. When John Barton died, she came to a decision. “I remembered when we spoke about achieving our emancipation. The horror is that he had to die to achieve his.

The beauty is that I’m living to achieve mine.” (pg240). Josie believes in fighting for her emancipation. By the end of the year, Josie realises that she has already achieved her emancipation. “I just sat there thinking back over the year and I realised that I was emancipated long ago. It wasn’t at one particular point either, it was at several.” (pg258). At the Walk-a-thon, for example, Josie realised that leaving the walk-a-thon to go with her friends was wrong. “I was wrong, I thought to myself. I honestly believed it. Not because Sister Louise told me so or because she made me believe I was. I knew deep down that I was wrong and I think that my emancipation began at that moment.” (pg185). Events such as these lead to her emancipation, letting Josie feel free. At the beginning of the year Josie doesn’t have a good relationship with her Nonna, Katia. As the year goes on, they get closer, and it is through this closeness that Josie learns of Katia’s secret, that her mother’s biological father is not her Nonno Francesco, but is in fact, Marcus Sandford, an Australian man that Katia was friends with.

Josie first learns of Marcus after having a fight with her mother Christina. She later finds out that he was an Australian policeman who helped Katia during the war. Katia’s sister Patrizia was very thankful towards him for his help, but Josie could tell that Katia thought of him as more than another pair of hands. At Christina’s birthday party Josie realises that it was impossible for Francesco to be Christina’s father, because he was away for the holidays. Josie then has an argument with Katia about this, and runs out of the house. “I’m not quite sure why I hate Marcus Sandford and Nonna for what they did. I had thought their story was romantic. I had thought that nothing had happened. It was like he was a myth I could always dream about. My mother, though, is the reality. Her reality was living with a man who detested her for something her mother did.” (pg218).

After realising that she was no longer angry at Katia, Josie goes to talk to her, and appreciates that staying with Francesco, instead of going with Marcus, was only for Christina’s benefit, not her own. “Those years without Christina or you when you were a baby were my punishment.” (pg226). Josie understands the pain Katia went through, and knows that Katia loves her, and Christina, more than anything else. Josie has always seen her Italian culture and heritage as a burden, but as the year progresses, she gains a greater understanding of it, and ultimately accepts that it’s part in her life. From the beginning of the year, and perhaps before then, Josie thinks of her culture as something that will hold her back from being what she wants to be, and doing what she wants to do. She also sees it as the thing that keeps her from being like the others at her school.

“I think if it comes down to the bottom line, no matter how smart I am, or how much I achieve, I am always going to be a little ethnic from Glebe as far as these people are concerned.” (pg167). She later realises that she can never get away from it. “…simply because like religion, culture is nailed into you, so deep you can’t escape it. No matter how far you run.” (pg175). Josie knows that her culture is a part of her being, it plays a part as to her appearance, and how she looks at life. As she spends more time learning and understanding her family, in particular Katia, she sees her culture not as a burden, but as a gift, something that sets her apart from everyone else. She gains an understanding that her culture is just one of Australia’s many. “Well, I’m not sure whether everyone in this country will ever understand multiculturalism and that saddens me, because it’s as much a part of Australian life as football and meat pies.” (pg258).

She knows that some people will never accept her, and she’s okay with that. “I didn’t care what they thought and I even began to doubt that anyone, give or take a few gossips like Sera, gave a damn either. I thought of Michael and my mother, who didn’t seem to worry about people’s opinions. And by the looks of things, Nonna didn’t have the right to. Jacob didn’t give a damn who I was either, John accepted me the way I was and Lee and Anna had never made me feel different. So that covered all the important people and I’d be a pretentious hypocrite if others were more important to me than those who loved me.” (pg220). Josie knows that culture will change people’s minds about her, but as long as it doesn’t matter to the people she loves, then it doesn’t matter to her either. Josie experiences an unusual thing in her year, meeting her father Michael Andretti for the first time, and having a relationship with him.

She has known about him all of her life, and at first, when he moves to Sydney, she doesn’t want anything to do with him. When she finally meets him at Katia’s she becomes emotionally overwhelmed, and can’t face him. After a fight with Carly Bishop, resulting in a broken nose, Josie decided to call him. As much as Josie would like to keep on ignoring him, she needs his help. “‘My father is a barrister. I’ll call him,’ I said calmly”. (pg84). When he comes and helps her, she accepts him as her father. Soon after that, Michael decided that he would like to know Josie, and they begin a relationship. As time goes on, Josie and Michael get closer, and they go away together to Adelaide. During this time, the two get closer. “I’m still shocked by how fast things are going between us. Six months ago I hadn’t met my father and I didn’t want to.

These days I see him three times a week and the days I don’t see him he rings me. Somehow we’ve developed a great relationship.” (pg156). Near the end of the year Josie finds out that Michael is staying in Sydney, and Josie is ecstatic, and spends more and more time with him, even going as far as calling him “Dad” “But I love Michael Andretti more and more every day. I love him double to what I did maybe a month ago, yet I see his faults now too.” (pg259). Although Josie started the year not knowing her father, Michael Andretti easily moved into the role, providing Josie with a complete, loving family. Throughout the year Josie went through many changes and developments, caused by important events in her life.

Some things happened that she expected, like her emancipation, and some things that happened that she didn’t really expect, like accepting her culture. Josie got something she didn’t want, her family secret, but got something better, her relationship with her dad. Josie finally realised exactly who she was, and understands where she fits into the lives around her. “I’ve figured out that it doesn’t matter whether I’m Josephine Andretti who was never an Alibrandi, who should have been a Sandford and who may never be a Coote. It matters who I feel like I am – and I feel like Michael and Christina’s daughter and Katia’s granddaughter; Sera, Anna and Lee’s friend and Robert’s cousin. You know, a wonderful thing happened to me when I reflected back on my year. ‘One day’ came. Because finally I understood.” (pg260). 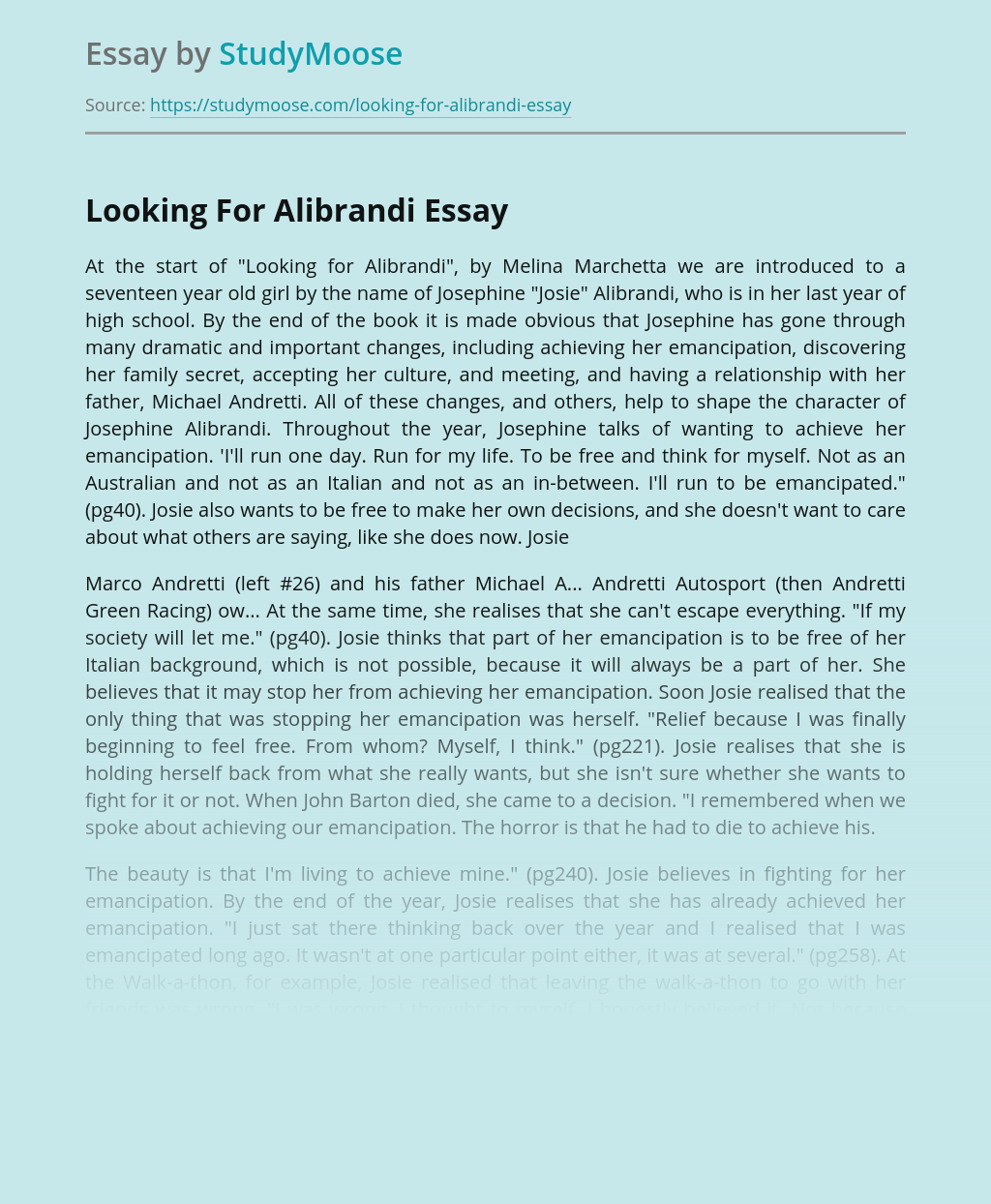 Turn in your highest-quality paper
Get a qualified writer to help you with
“ Looking For Alibrandi ”
Get high-quality paper
Helping students since 2015
Stay Safe, Stay Original