Narrative Essay - My trip to Italy

I could feel the anticipation rising within myself knowing that my trip to Italy was just a few weeks away. I had waited my whole life for this one moment. It was near the month of April, and that meant spring break was just right around the corner. To give a little bit of background, I come from an Italian family. I have yet to see the beautiful terrain where my ancestors had originated, but I do know that my family stems from Naples, Terre, and Rome, Italy.

Don't use plagiarized sources. Get your custom essay on
“ Narrative Essay – My trip to Italy ”
Get custom paper
NEW! smart matching with writer

The Terraciano name traces back to Terre, Italy and my ancestors originated from Naples, Italy. My ancestors immigrated into Ellis Island, thus, most of my family lives in New York. Going to Italy was a figure of speech in our household. We would talk about it, but I didn’t believe that we would actually go through with this idea. This figure of my imagination was soon developing into reality.

Earlier in the year, the whole family and I all sat down and talked about what the next adventure as a family would be.

Everyone had their own opinions, but one idea stood out from all the others. My dad had suggested that we all go to Italy for the reason of learning more about our family history. By this point everyone was on board with the idea, and for about the next four months, my family and I were preparing for a trip of a life time. As time passed by, I could see the excitement build.

I had about a week before spring break, and this trip to Italy was still on full throttle. There was no turning back. The days became eternal, but then after a mere five long days had passed, my long awaited and beloved Italy trip had smacked me in the face and I found myself at the airport. The flight to Italy was mind numbingly long, as it was ten hours without layover time. The plan was to land in Rome, then take a train to Florence, and a train to Venice.

It was a Sunday morning in Rome, Italy, but my internal clock was telling me differently. We drove to our hotel and got settled in, but sleep was not even in our vocabulary at this point. I was on spring break, so I only had five days to see the sights of each town I wanted to visit, which meant I only had two days to spend in each city. It was a lovely Sunday morning here in the bright and alive city of Rome, that my family and I decided to take a stroll around Vatican City. The city was a little chaotic, but I quickly realized the reason why there were so many people screaming and yelling. Pope Francis was in the middle of making a speech. Unfortunately, I couldn’t stay too long and neither could the rest of the family due to our battle of jet lag. Our fun filled day ended by two o’clock, but the next morning wasn’t so bad. We were excited to start our day, so we quickly got ready and headed out the door. Today marked the day of touring all around ancient Rome.

I’ve read so much about Italy in books, learned about the country in school, and I have watched shows about it on the history channel when there was nothing else better to watch, but I never really knew how special this place was until I saw it myself. I visited many places, and some of those historic places included: the Fontana Fountain, the Colosseum, and Caesar’s Palace. The Fontana Fountain is located within the Trevi district. This fountain is made from Travertine stone, and is said to hold thousands of wishes. The Colosseum, also known as the Flavian Amphitheatre is an elliptical amphitheatre that is located in the center of Rome, Italy. With its concrete and stone architecture, it is known to be the greatest works of the Roman Empire.

While there was nothing much left of Caesar’s Palace but three lonely columns, just being in the presence of the palace was breath taking. Ruins that surround what used to be the center of the Roman Empire, still show an impact on people. While on the tour, I saw one building in particular which had so many intricate statues. I was curious to know who these people were, and what was the meaning behind them. The tour guide said that one of the statues was in the likeness of a Greek goddess. The tour guide told me that her name was Nike, like the shoe brand. She was the goddess of victory, and power. The brand “NIKE” stems from this goddess simply for the meaning. The “check mark” on the shoe is actually the symbol of her wings. Although our time in Rome was fun, it was time to head to the next adventure, which was Firenze.

Welcome to Florence, Italy! The only place you can go to get the famous unsalted bread. To give a little bit of history, salt was hard to come by back in the day in Italy. Salt was considered a sacred item that only the wealthy were able to obtain. Due to this, many Italians just ditched salt out of the baking process of their bread recipes. Since then, Florence has kept the tradition going strong. To this day, Florence, Italy is the only place where travelers will find a different tasting in bread. In my opinion, it actually tasted better without the added salt. After our bread tasting, my family and I had just stepped off of the train and were immediately amazed by our surroundings. Florence had such a different vibe and look to their town rather than Rome. Florence is to Atlanta, as Rome would be to Kennesaw.

Our first adventure in this new town was to go visit the museum of Michael Angelo. Within the museum, the world-renowned Statue of David was on display. Due to its extreme fragileness, viewers were not allowed to take pictures of the works of art, including the Statue of David. This was a trip of a life time, I wasn’t going to let this chance pass me by. Even though there were a billion cameras watching my every move, and security guards staring people down suspiciously as if everyone had some secret to hide, I still went in for the infamous picture. While visiting the lovely city of Florence, I managed to take part in a food tour. Along this food tour, I tasted some cured ham, which is known as prosciutto. I also tasted some fine chocolates, wines, and aged cheeses. The time I spent in Florence was nothing less of amazing, but sadly that adventure had to come to an end. Say goodbye to Florence, and hello Venice!

The sweet sounds of gondoliers singing, and the smell of fresh pastries making their way out of the oven reminds me that I have reached the city of, Venezia. When I finally stepped foot into the new environment, my expectations of the city was quickly fulfilled. When I think of Venice, Italy, I think of gondolas, and old intricate buildings. Venice was everything I have ever imagined. The gondola ride was very soothing, and relaxing. The gondolier sang beautifully even though I couldn’t understand a word he was saying.

What’s so unique about Venice is that the citizens live off of historical and traditional value. Every building was roughly from the 1500’s. Citizens of the city do not approve of tearing down history and tradition. Every building still had its traditional and historic value, but anything new was only built on top of the structure. For example, while on a mini tour around the area, I came across a building that had a stairway that traced back to the 1500’s in the medieval time period. The only historic piece left standing on the building was the stairway. Venice sure did have a lot to offer.

In conclusion, this was a trip of a life time and I hope one day I get the chance to come back and explore more places I have yet to discover. By attending this trip with my family, I was able to learn more about my background and became more passionate about where my family had originated. Out of all three of my adventures to Rome, Florence, and Venice, Rome Italy would have to be my favorite. Rome has more of the historic aspect of Italy, which I find very interesting. My family and I do plan on continuing to travel the world in search of finding out more about our family roots. On that note, the trip to Italy was a definite success and I am looking forward to many more trips to come.

Narrative Essay - My trip to Italy. (2016, Aug 10). Retrieved from https://studymoose.com/narrative-essay-my-trip-to-italy-essay 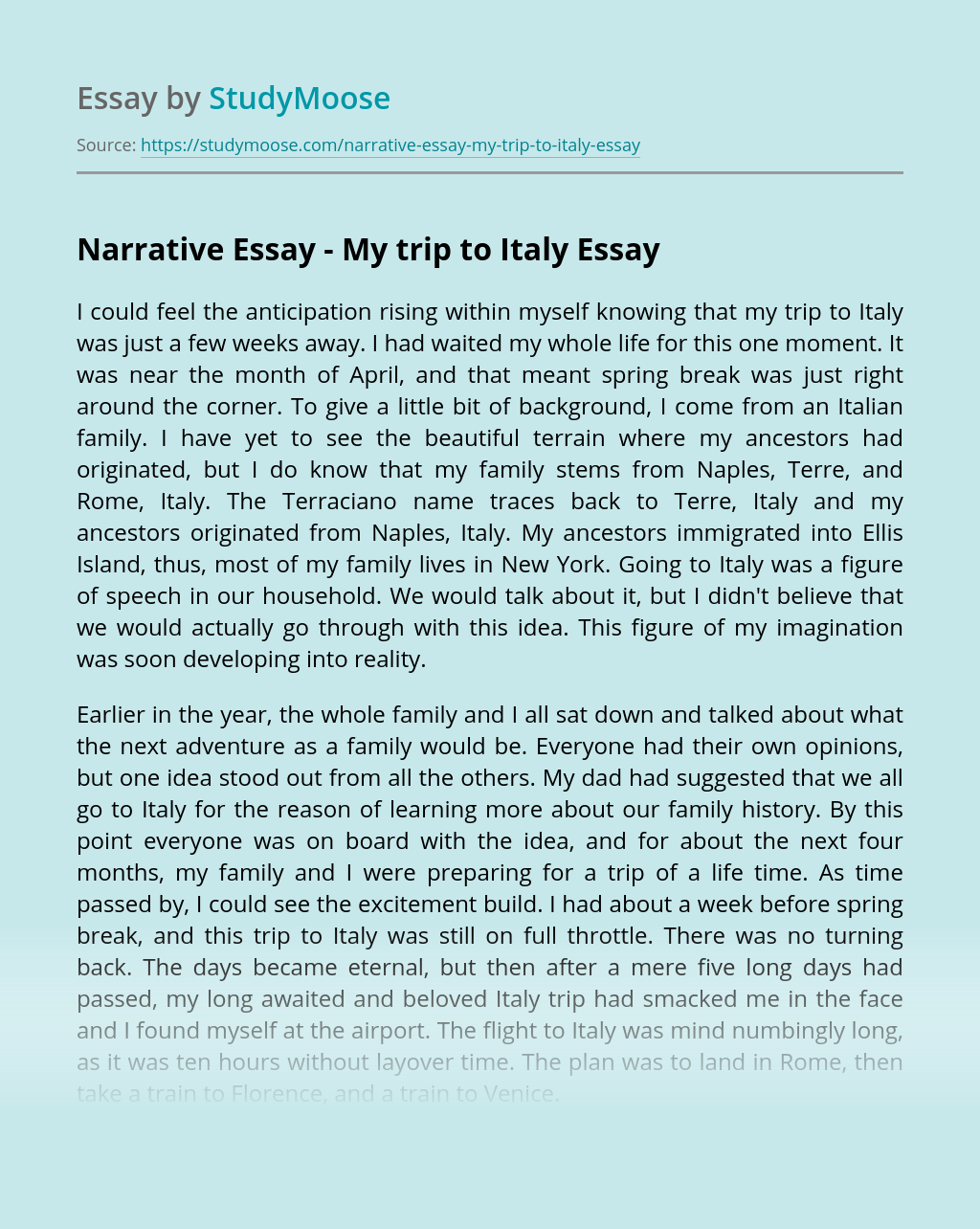