Steve Jobs : How to Live Before You Die

The scene took place at the commencement of Stanford University in the United States. Steve Jobs, CEO and co-founder of Apple and Pixar, made a public speech on his life views. He wan over the audience thanks to three stories from his life.

The first one was about many facts which are linked in life. He called it ” connecting the dots”. He related his childhood and explained why he dropped out college. He had to focus and chose to take specific classes.

Don't use plagiarized sources. Get your custom essay on
“ Steve Jobs : How to Live Before You Die ”
Get custom paper
NEW! smart matching with writer

Calligraphy course was one of them. Thereafter, he used his calligraphy knowledge when he was designing the first Macintosh computer. The typography was designed all into the Mac. At this time, it was impossible for him to connect calligrapgy and computers but he could connect them looking backwards.

The second story is about ” love and loss”. His message was very encouraging for the youth generation. He furnished support and gave confidence in the same time. To create and to be fired from his own company ( Apple) was a challenge for him.

Instead of going back, he got ahead with work. He insisted of doing something that you love and keep looking for it if you did not find it. It was an optimistic message.

The last story but not the least is about ” death”. In a turn of events, this part is the most poignancy…I was affected when I heard him but I felt relieved for him in the same time. As a matter of fact, his vision of death is clear and objective.

He talked about his cancer and how he thought being recovered from it. His disease made him realise that was the most important in life and that ” Death is very likely the single best invention of life”. He closed his speech with speaking about his ambitions and memories. A farewell message was coming out : ” Stay hungry, Stay foolish”.

I have choosen this video from Ted website because it is quite a topical subject and a global message about life.Steve Jobs is influencial and famous.His entire life was an example for everyone. It meant that everybody, no matter where does one come from or one’s social background, can succeed. The most important is to do what you like and to not forget that you have to put things into perspective : Events are linked in life. Death just reminds us that we have to have to make the most out our lives and try to live as if tomorrow is the last day.

Steve Jobs : How to Live Before You Die. (2017, Feb 17). Retrieved from https://studymoose.com/steve-jobs-how-to-live-before-you-die-essay 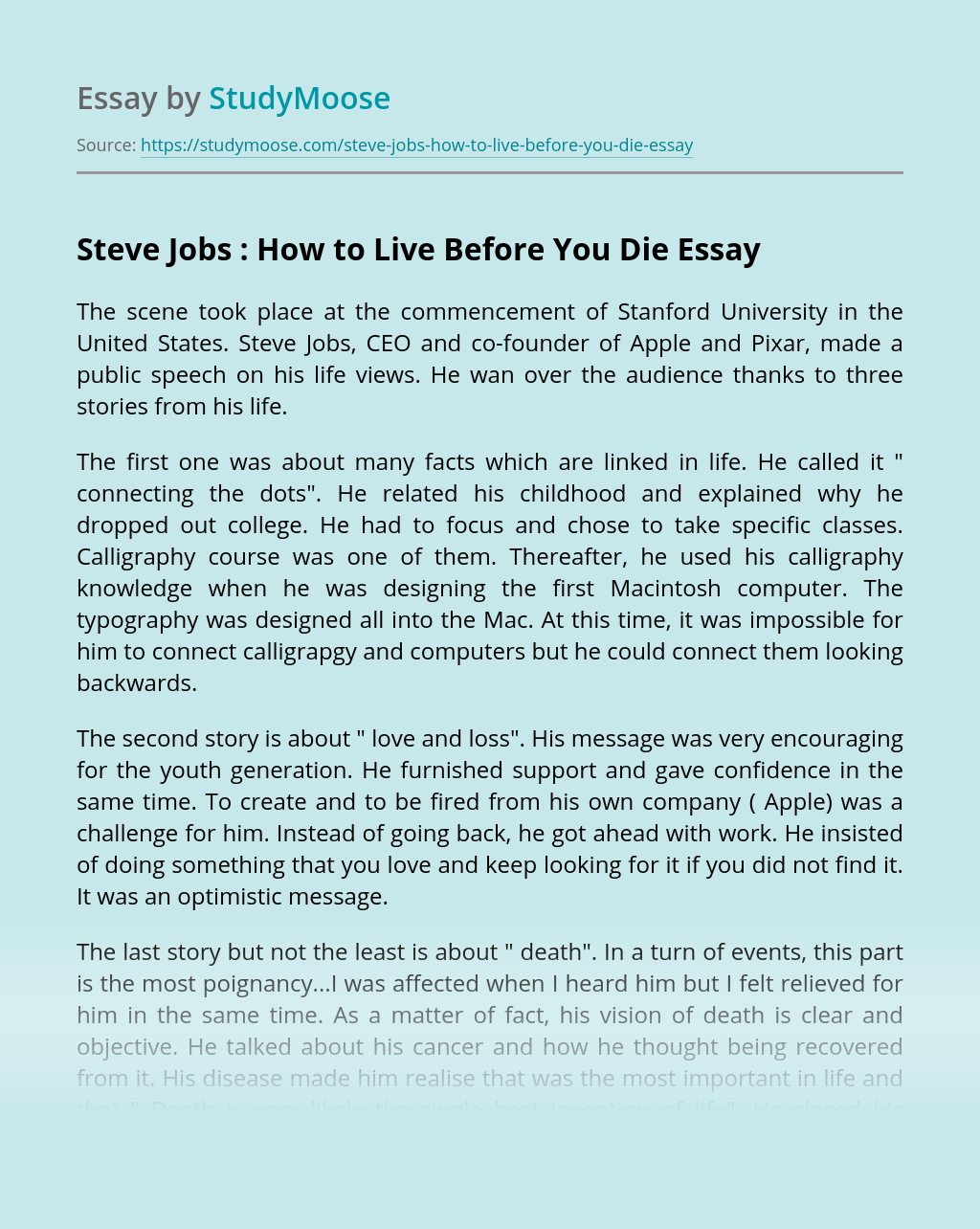