There has been a sufficient mention of a profound dearth of interest in preserving Dubai’s heritage and culture for future generations. The severity of Dubai’s cultural problems (both current and impending) is an overwhelming testament to the shortfalls of various cultural players. Dubai’s cultural scene is beset by issues ranging from funding to the non-existence of a governing agency on cultural arts and activities. The lack of funding allocation for Culture, Heritage and the Arts hampers government organizations from awarding prizes for artistic/literary achievements and awarding subsidies for the pursuit of the Arts.

Don't use plagiarized sources. Get your custom essay on
“ Dubai’s heritage and culture for future generations ”
Get custom paper
NEW! smart matching with writer

This phenomenon holds true for the Fine Arts and Literature although the UAE government has accorded ample financial support for Festivals like the Dubai Shopping Festival and Dubai Summer Surprises and theatrical infrastructure improvements. Support for Folklores Promotion and Archeology and Heritage Campaign, however, has not been reasonable; folklore presenters being imported from Oman and Archeology and Heritage Funds mostly channeled to administrative expenses.

Education, being an essential tool for information dissemination, interest stimulation, and revolutionary change has not been aptly utilized to impact artistic/cultural perspectives among Dubai’s youth. This has crucial implications for both the quality and availability of indigenous workforce in that line. There are limited schools for Drama and Theatre, Music, and Folklore. Academic trainings for Archeology and postgraduate courses for Media are unavailable in the United Arab Emirates. Insufficient emphasis is given to Fine Arts, Literature, Folklore, and Heritage in school curriculums.

Commercial Music Institutes, more than being of questionable quality, are beyond affordability by some Dubai residents.

Lack of public interest is often the offered rationale for these academic limitations, although initiatives focused on the dilemma could have sparked a renewed public interest in Culture and the Arts. This dearth of public interest has crucial implications for the composition of Dubai’s cultural workforce and the artistic/cultural participation among the populace. The Nationals’ interest in theatre and performing arts is in congruence with the number of theatrical activities providers- both are limited.

Dubai’s Fine Arts Exhibits showcase some unique talents and the artistic experience. However, the arena is beset by commercialism and a lack of appreciation among UAE nationals. Expatriates are more keen on Emirate Arts which benefits from an artistic enthusiasm peculiar to a wealthier society segment. Dubai’s Musical Arena is characterized by a musically-inclined, musically-upbeat society, and a commercialized musical education system. Songs and dances are an important part of celebrations, and there is an inordinate demand for international concert seats.

Inadequate project experience and strong public participation, however, marks Dubai’s Film Scene. The launching of the International Film Festival in 2004 and the Dubai Studio City Project are predicted to generate a strong reception on Dubai’s film, TV, and music industries. Dubai’s literary domain, mainly focused on poetry, is not supportive of the development of intellectuals and thinkers. Government-sponsored poetry awards are an insufficient compensation for the limited career prospects for literature graduates.

Festivals in Dubai such as the Dubai Shopping Festival and the Dubai Summer Surprises have acquired an international reputation, drawing tourists from the Middle East and beyond. However, a highly-trained festival-hosting workforce stands in stark contrast to the unprofessional and poorly-trained folklore performers, mostly from Oman. While Dubai’s rapid economic growth has made it a preferred destination for business meetings and international events, its vantage for exhibiting local folkloric performances to an international audience has not been fully utilized.

It is quite ironic in that part of the reason of the businesses’ choice of Dubai is the pursuit of some Mideastern charm. Restoration attempts on Dubai’s historic buildings and the circulation of accompanying brochures and maps in multiple international languages are commendable efforts at giving tourists a glimpse of its ancient glory. The aforementioned measures are necessary to take advantage of Dubai’s vantage in the highly-competitive heritage tourism industry.

However, the unavailability of Archeology programs in the UAE academe, and hence, the dearth of local Archeology specialists consequence in expatriate archeologists having to send artifacts to their respective countries for research/examination. Dubai’s Media Sector, with its state-of-the-art infrastructure and openness to competition, is in a struggle between foreign ownership and foreign workforce domination and calculated guardianship measures against Western infiltration. The media hub, albeit accommodating of the city’s cosmopolitan composition, suffers the dearth of a commercialized local cultural content.

Islam is highly-inculturated and educationally-integrated in Dubai amidst its policy of accommodation and support to non-Muslim, expatriate religions. It is only a sober fact that the beauty of Islam has been overshadowed by negative perceptions pertinent to Terrorism. By and large, Dubai’s Islamic atmosphere, liberal for its multicultural make-up, is aptly guided by the Islamic values of tolerance and moderation. Technology can accord Dubai’s Arts and Culture a distinct vantage, but it can also effect otherwise.

Electronic proliferation is a global trend, and cultural domination vis-a-vis high-technology is way unpredictable. It would also be of interest to note of the inadequate coordination among various cultural and arts providers and between Dubai’s public and private sectors. Dubai’s cultural scene is oblivious to common notice because of the dearth of literature in the subject; the absence of data on usage, patterns and preferences and the paucity of surveys and researches are common themes that beset Dubai’s cultural components.

It is ironic that cultural/heritage problems prevail in Dubai, while the United Arab Emirates as a whole advocates culture and heritage. In the UAE, the preservation of many of its unique archaeological and architectural sites and its manuscripts have been given special preference. Literature and customs are widely studied in schools, while museum displays, heritage villages and the restoration of vanished monuments (based on photographs, local memory and documentary evidence) have helped to create a context and feel for this cultural legacy .

Abu Dhabi signed a Memorandum of Understanding (MOU) with the New York-based Guggenheim Foundation to establish a world-class museum devoted to modern and contemporary art, called the Guggenheim Abu Dhabi (GAD), the museum designed by the eminent architect Frank Gehry will place the Emirates as a leading international cultural destination22. The researchers have asserted that situated in the center of Abu Dhabi, there is a Cultural Foundation which is now part of the Abu Dhabi Authority for Culture and Heritage (ADCH); this, at the heart of the capital’s cultural life benefits children, adults of all ages, UAE citizens and expatriates.

One of the most significant features of the Cultural Foundation is the National Library which has well over a million books, primarily in Arabic, although there are also collections in a myriad of foreign languages. A majority of these volumes are available for reference for the public, plainly requiring a simple registration process. There is also an area for children where special programs are planned, especially during the school holidays2 . It is apparent that the culture of Dubai should be promoted in the same manner; perhaps these cities could share wealth in culture preservation through the Fine and Performing Arts and the Media. 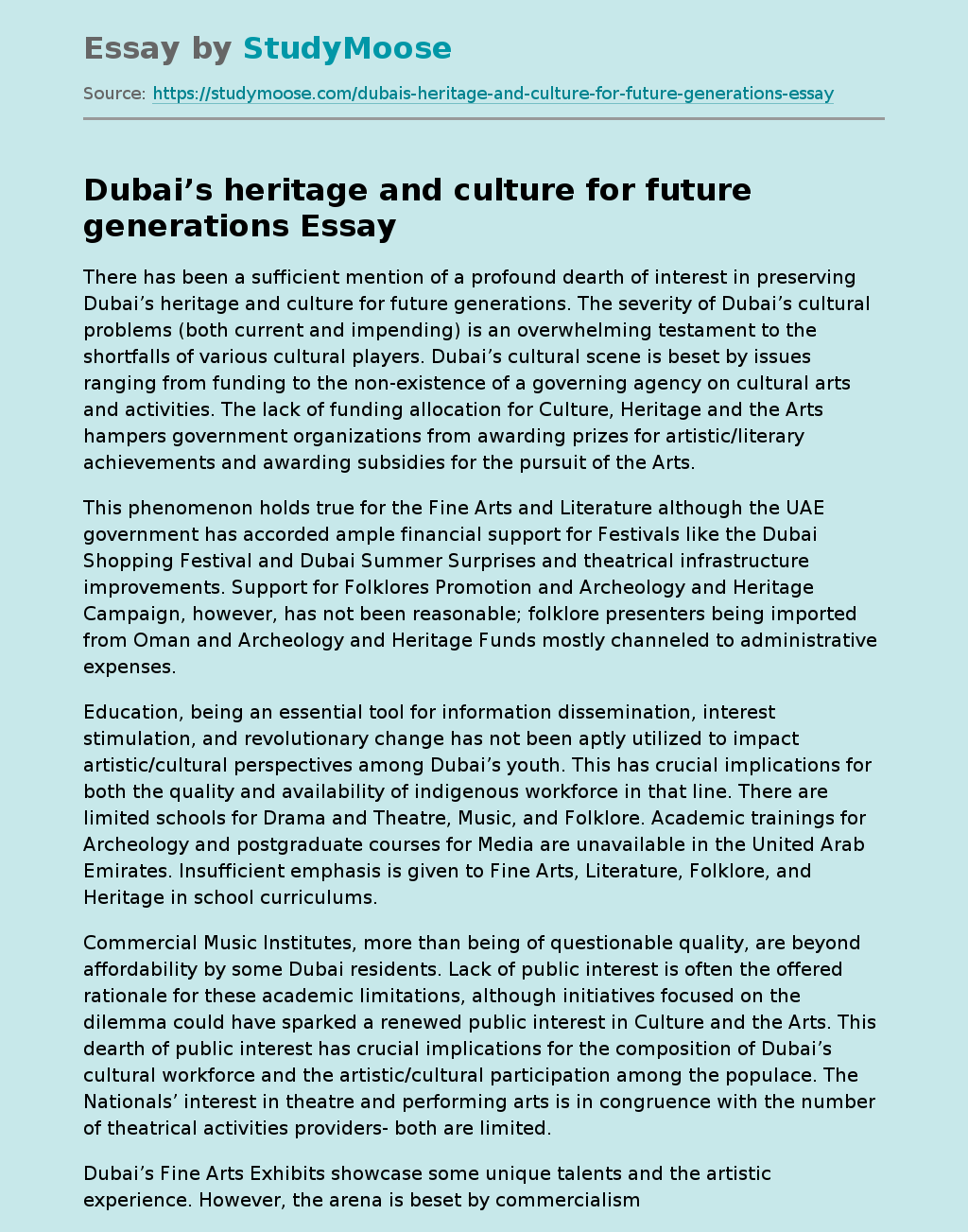