Industrial democracy has its origins in the theories of Kurt Lewin who strongly advocated the idea that the management of change requires full participation from those affected by change (Sambureni 2001). Sambureni further defines industrial democracy as ‘a process in which employees either directly or indirectly through their representatives, share equal power over the decision-making process which management normally reserves to itself’. Industrial democracy is also defined as ‘an arrangement which involves workers making decisions, sharing responsibility and authority in the workplace (www.

wikipedia.org ).As can be deduced from the above definitions, the essential feature of industrial democracy is that it gives employees or their representatives a share in the process of management. It is against this background that this essay will examine the view that ‘there is industrial democracy in Zimbabwe’ using practical examples from Zimbabwean enterprises.

Since the settler occupation in 1890, in the hierarchical order of Rhodesia, the Black stood at the lowest level. As an African, one was subjected to the overall system of discrimination, as a worker, one was also a victim of particularregulations which prior to the Industrial Conciliation Act of 1959, prevented African workers from participating in the determination of their conditions of service by excluding them from the definition of ‘employee’ (Maphosa, 1991).

The colonialists promulgated laws that repressed and suppressed workers, most notably, the Master and Servants Act, hence, the absence of industrial democracy. Upon attainment of independence, the government of Zimbabwe implemented policies to address the racial imbalancesthat were created by the colonial administration in terms of industrial relations to promote industrial democracy in workplaces.

Sachikonye (1985) propounds that the existence of a Labour Courtin Zimbabwe is clear testimony of the presence of industrial democracy in Zimbabwe. It is an appeal court for a variety of labour disputes. The Labour Courtprotects workers’ rights to the extent where some writers claim that workers in Zimbabwe are ‘over-protected’ by the law. This claim is supported by various cases, one of which is the case where Air Zimbabwe Senior Managers relieved of their duties in 2009 and took up their matter to
the Labour Court were awarded one hundred thousand United States dollars exit packages for each manager. This is industrial democracy at its best though some critics may find it too harsh a ruling on the part of the employer who might face financial challenges caused by the unexpected expense and leaves the employer with no right to dismiss employees as the dismissed employees will appeal through the labour court which always rules against the employer.However, an International LabourOrganisation (ILO) audit carried out by Lovemore Madhukunotes that awards and judgements by the Labour Court are not immediately enforceable as they have to be registered with the High Court. Some reformists have suggested that the Labour Court should be made the court of final appeal in all labour matters and be empowered to enforce its own decisions.The audit also notes that there are no time limits prescribed for making judgements. This was contrasted with other countries where time limits, the most common being 30 and 90 days are stipulated.In this case, justice delayed is justice denied thereby violating the principles of industrial democracy.

According to the Constitution of Zimbabwe (2013), except for members of the Security Services, every person in Zimbabwe has the right to form and join Trade Unions and employee and employers’ organisations of their choice and to participate in the lawful activities of those unions and activities. The right to form or join or participate in the activities of a trade union is protected by both the Constitution of Zimbabwe and the Labour Relations Act (Madhuku, 2009). This supports the view that there is industrial democracy in Zimbabwe as it gives employee or employer organisations the right to engage in collective bargaining, organise and form and join federations of such unions and organisations. Examples of Trade unions in Zimbabwe include Zimbabwe Congress of Trade Unions (ZCTU) which is the dominant central Trade Union in Zimbabwe, the Zimbabwe Teachers’ Association (ZIMTA) the largest and most influential Teachers’ organisation and the Zimbabwe Federation of Trade Unions (ZFTU) made up of professionals in labour management, disputes and tribunal settlements among others.

It is notable to mention though that in practice, members of independent trade Union organisations face harassment and intimidation from government
forces and it is extremely difficult for them to carry out any Trade Union activities. Although the High Court ruled in April 2002 that the ZCTU does not need permission from the police to hold private meetings, the police have continued to interfere with its meetings, for example, on January 10 2006, armed police raided ZCTU offices confiscating computer discs and files and the government claimed to have launched an investigation into allegations of financial mismanagement by trade union leaders but ZCTU President Lovemore Matombo said it was a political move to silence the union by discrediting its leadership, hence, violating the ethics of industrial democracy.

The enactment of the Labour Relations Act of 1985 in Zimbabwe bears witness to the presence of industrial democracy. The Act, according to Sambureni (2001) created a framework for the exercise of fundamental rights of workers that include termination of employment, retrenchment, dispute settlement process and HIV and AIDS regulations, unfair labour practices, minimum and maximum wages, creates a framework for collective bargaining as a source of terms and conditions of employment and also vests the dispute handling powers with the Ministry of Labour to deal with work-related disputes through mediation, conciliation and arbitration. In this case, however, one can argue that state intervention in the form of legislated minimum wages or maximum salaries has in part contributed to ineffectual worker participation in managerial decision making. In some sectors, for example the Apex Council of Public Sector Unions, the Public Service ministry set parameters within which salary increases can be negotiated. Such parameters constitute limits to the nature and extent of both management decision-making and workers participation in it, and hence, limits the values of industrial democracy.

Another indicator by the government of Zimbabwe to promote industrial democracy is the right of workers to be represented at a disciplinary hearing, which is a fundamental principle of natural justice (Kanyenze, 2001). Section (4) (b) of Statutory Instrument 15 of 2006 entitles an employee appearing before the employer or disciplinary authority to be represented by either a fellow employee, Workers’ Committee member, Trade
Union official or Legal Practitioner. All company codes of conduct and National Employment Council codes in Zimbabwe provide for the right to representation in their procedures. In the case of Vice Chancellor, University of Zimbabwe vsMutasa (1993) which involved the expulsion of three students from the University of Zimbabwe, the issue of legal representation was dealt with. However, in Minerals Marketing Corporation of Zimbabwe (MMCZ) vs John Mazvimavi (SC295/95), former Justice Anthony Gubbay left the right to legal representation as an open question as the labour Tribunal had ruled that MMCZs refusal to permit John Mazvimavi to be legally represented amounted to a violation of the principles on natural justice and the main beliefs of industrial democracy. As regards discrimination, the Labour Relations Act of Zimbabwe stipulates that no employer or person shall discriminate against any employee or prospective employee on grounds of race, tribe, place of origin, political opinion, colour, creed or sex in relation to the advertisement of employment, recruitment for employment, creation or abolition of jobs, the choice of persons for jobs or posts, training advancement, apprenticeships, transfer, promotion or retrenchment and any other matter related to employment. This clearly confirms the view that there is industrial democracy in Zimbabwe. However, cases of discrimination on grounds of one’s HIV status still exist in the Army, Health sector and the Civil Aviation Authority of Zimbabwe were employees are expected to undergo HIV tests periodically and these have a bearing on the working conditions of the employee. If the employee is found to be HIV positive, then some of their duties and responsibilities may be scrapped off their job description.

It has been stated by a leading labour lawyer that, ‘There can be no equilibrium in industrial relations without a freedom to strike’ (Madhuku, 2009). In protecting that freedom, the law protects the legitimate expectations of workers that they can make use of their collective power. The new Zimbabwe constitution has a bill of rights that gives unconditional rights to strike by employees.The right to strike cannot be separated from collective bargaining as strikes are only justifiable for purposes of maintaining equilibrium in labour relations, that is, for collective bargaining purposes. In this regard, one can safely say that there is
industrial democracy in Zimbabwe. However, although the Labour Relations Act recognises the right to strike, there are many procedural hurdles, including the fact that more than 50 percent of the employees must vote for a strike, followed by a 30 day conciliation period and possible referral to binding arbitration and then a 14 day advance notice period (Kanyenze, 2011). The sum effect of these delaying tactics is that it is practically impossible to organise a legal strike. In Zimbabwe Teachers Association and Others vs Minister of Education and Culture, government’s purported dismissal of striking teachers who had defied its orders to return to work was held by the High Court to be unlawful as the dismissed Teachers had not been given an opportunity to be heard. 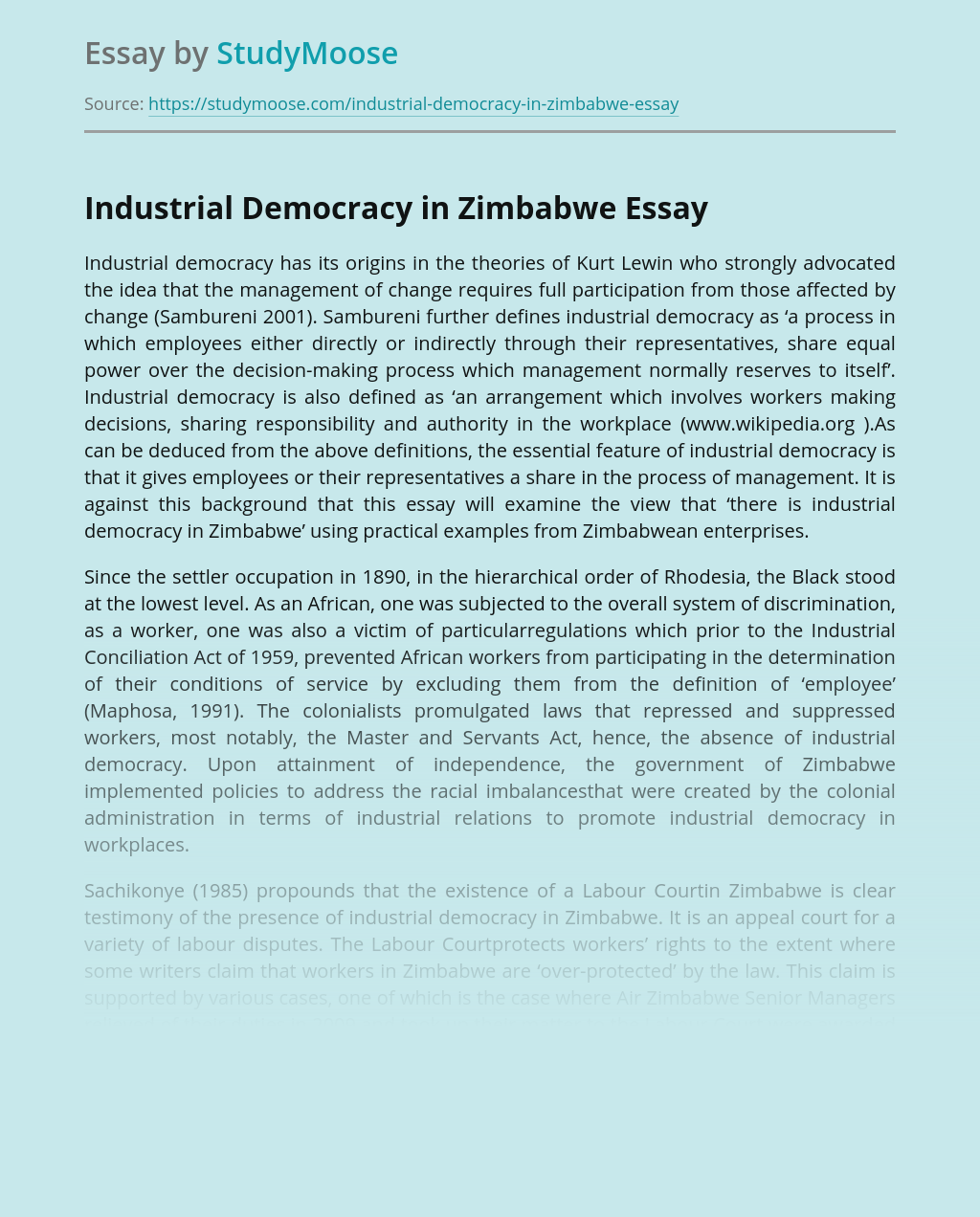 Don’t waste time
Get a verified expert to help you with Industrial Democracy in Zimbabwe
Hire verified expert
$35.80 for a 2-page paper
Stay Safe, Stay Original