Since 1982 when Hosiah Chipanga started his music carrier he has used his music to try and address real issues affecting the people of Zimbabwe. Due to the sensitivity of some of his songs Hosiah Chipanga music has been censored by the government many times and he has been isolated from all state linked events and functions. Hosiah Chipanga is one of the most controversial musicians to have emerged in post-independent Zimbabwe. During his career Chipanga has belted many controversial songs as commentary to political and social issues .

Don't use plagiarized sources. Get your custom essay on
“ Zimbabwe History ”
Get custom paper
NEW! smart matching with writer

His music can be classified in different themes according to issues they will be addressing such as the educative theme, advising theme, watchdogs theme. Hosiah Chipanga had made a contribution of some sort to democracy and good governance in Zimbabwe through how his music articulate socio political issues of Zimbabwe. In this study twenty songs of Hosiah Chipanga were purposively sampled according to themes they try to address. In Zimbabwe, Hosiah Chipanga is known to use music in his quest to understand the “truth” about the ontological nature of human challenges, Rwafa (2015)

The song “Gushungo” (Totemic reference to former President Robert Gabriel Mugabe) complains the presence of a serious “disease” of “blame shifting” that has invaded Zimbabwe’s social, economic and political spheres.

Three themes can be seen in the song that are the educative, the informative and the advisoral themes. Since Zimbabwe’s independence that was attained in 1980, politicians, business people and ordinary citizens have been using different means in order to survive.

The battle for survival intensified from 2000, and it also brought about unscrupulous ways such as corruption, unauthorized selling of goods outside the country, money laundering, and externalization of funds, bribery and nepotism. To reflect the origins, scope and effects of corruption, Dabudabu (2013: 6) a Zimbabwean social critic has this to say about corruption: “The culture of corruption got imbedded in our way of doing things as soon as we got our freedom from colonialists. There was a lot of money floating in State coffers as a result of soft loans and grants extended to Zimbabwe by donors and financial organizations. Hungry and lanky ministers who had just returned either from exile or from the bush found themselves tasked with making sure funds were put into use ·. Man who had faced hardships during the war started to shed off their rough skins and acquired smoother ones. They became rotund and pot-bellied. They built mansions everywhere, married younger wives and drove in sleek wheels. They became detached from the people”. The song “Gushungo” confronts the culprits that are/were implicated in committing economic crimes, and yet would not accept that they are/were responsible for bringing down Zimbabwe’s economy. The lyrics from Chipanga’s song “Gushungo” construct different levels of corruption some that are very visible, and yet others not-so-visible. The “tough talk” embedded in the song “Gushungo” starts with people in Zimbabwe complaining about the difficult economic conditions that they are facing (Zvinhu zvaoma Gushungo matirasa). According to the song, people complain to the political leadership, symbolized by Gushungo, that things are now tough, yet they are/were part of the “chemistry” that led to the deterioration of economic conditions in Zimbabwe due to their nefarious activities.

The “truth is that at the height of economic meltdown between 2000-2008, some Zimbabweans holding influential positions were involved in swindling money from banks for externalization (Pawaiba mari kubhangi wakangawatu mwanani?), speculated and hiked prices of basic commodities, horded goods in bulk and sold them outside the country (Hupfu uchiendesa kuMoza wakanga watumwa nani?) As well engaging in “shady deals”. On this part Chipanga is informing the public of their actions which had nailed down the economy at the same time playing a watchdog role to expose corruption.

The visibility of some cases of corruption, embezzlement of private and state funds and bribery can be supported by evidence in which notable figures such as Mhlangu (MDC legislator) who failed to account for US$7 000 and US$50 000 that was meant for his constituent, as well as the ZANU (PF) legislator by the name of Ndambakuwa, who was arrested on allegations of failing to account for US$39 000 and US$50 000 also meant for his constituency (The Herald 6 March 2012). Through the iteration of the rhetorical question “wakanga watumwa nani?” (Who had sent you?), Chipanga aims to install an “agitating effect” in the minds of Zimbabweans who were involved in committing economic crimes. It is a way of making culprits have self-introspection; feel a sense of guilt and shame so that the culprits will reform and begin to work towards changing their behavior for the benefit of their societies in particular, and Zimbabwe at large .On this part one can say Chipanga was giving some advice to his fellow countrymen who were involved in corruption.

Some resettled black farmers were given diesel and fertilizers by the government, which they sold on the black market instead of using them to boost agricultural production (Dhiziri wopuhwa wotengesa, wakanga watumwa nani? / Foteresa wopuhwa wotengesa wakanga watumwa nani?). Yet, these are the same people who had the temerity to call Mugabe “names” for his alleged mismanagement of Zimbabwe’s economy. Within the forte of Chipanga’s lyrical confrontation embedded in the rhetorical statement, Mapurazi mashanu, mashanu, wakanga watumwa nani? (When you grabbed more than five farms, who had sent you?)Sachikonye (2004: 13) condemns the culture of grabbing more than one farm contrary to the “one man, one farm policy” declared by Gushungo, when he describes the “Fast Track Land Program” as “a competitive scramble for commercial farms by members of the ruling elite” (Sachikonye 2004: 13). It is this competitive scramble to grab more than one farm by top government officials.

The song “Dafi” (frog) – an metaphorical reference to the so-called “born-frees” in Zimbabwe ? is an indictment to the official discourses that frown upon the youth’s desire to create their own space by challenging some of the policies that undermine their “dissenting voices”. Although the song “Dafi” is short, its lyrical messages are thought-provoking. In the song Chipanga took an advisoral role in making the elderly understand the value of the young generation

During the political upheavals of 2008, Zimbabwean youths who held opposing ideas from those of the government were derogatively labelled as the “born-frees” who did not participate in the liberation struggle and therefore were not expected to interrogate the social, economic and political status quo in Zimbabwe. But through the song “Dafi” Chipanga is saying it is the right of the “born-frees” to live in Zimbabwe and participate in whatever capacity, because in the first place, they did not choose to be born Zimbabwean. “Tsime nderenyu mambo ndimi makarichera asi ikodzero yangu dafi kurarama mutsime menyu” [This is your well, king, you are the one who made it but it’s my right as a frog to live in it]

In a democracy all people are equal despite of their age ,color race ,gender are equal and they hold fair share of powers in governance matters. In the song Dafi Hosiah Chipanga was trying to address the problem that was arising from a situation where by the youth were regarded as illegitimate to participate in the political issues of their country. “Zvamuno sema dafi vharidzai mvura yenyu” [Because you hate the frog, why don’t you cover your well?] Musauraya dafi, tsime rino oma iri [Don’t kill the frog because the well will get dry].On this part Chipanga was trying to highlight the importance of youth in the future of this country as they are the leaders of tomorrow. There is no future without the youth.

This mindset of thinking that the youth are not eligible to be in the governance structures is still showing its elements even today. This is better exemplified by the attempt by the ZANU PF party to raise the presidential age limit of forty to fifty year in 2018. Equality forms the foundation of democracy therefore addressing issues to do with equality Chipanga influenced the development and practice of democracy in through educating the important of youths in communities.

In his song Pharaoh that was a song for the former president of Zimbabwe R, G Mugabe who he likened to king Pharaoh of Egypt. Chipanga was trying to highlight all the misery that Mugabe brought to the people of Zimbabwe in his thirty seven year long reign .The lyrics of the song likened the Zimbabwean situation to the exodus of the people of Israel from the Egyptian bondage to Canaan the promised land. Throughout the song Hosiah Chipanga was talking about mineral resources particularly gold and diamond which were supposed to benefit ordinary citizens but failed due to the leader who is referred to as king Pharaoh.

“Nehanda nyakasikana modira ma diamond Chaminuka omwaya Goridhe kuti vana tirarame dambudziko ndiye Pharaoh” (Nehanda pours out diamonds Chaminuka sprinkle gold so that we your children can survive but the only remaining problem is Pharaoh). Zimbabwe is blessed with mineral resources including diamond fields in Chiyadzwa Marange in Manicaland and gold which is found almost every province of Zimbabwe. The mysterious discovery of diamond in early 2000s in Chiyadzwa area which had been long settled by people made some people to believe in the power of national spirit medium Nehanda and Chaminuka. The diamonds were discovered during the time when the national economy was in Shambles with a high unemployment rate .Diamonds discovery brought hopes to the local people who hoped to change their livelihoods through diamond mining since they were unemployed.

“Nehanda nyakasikana zamo renyu rasisa ngoda kuti vana tirarame dambudziko ndiye Pharaoh”. (Nehanda your breast is dripping diamond so that we your children we can survive the only problem is him Pharaoh). Thousands of Zimbabweans flooded the Chiyadzwa area in search of greener pastures like how the people of Israel flooded the rock from which Moses brought water from in the desert. The government responded quickly to the discovery of diamonds by evacuating people from the area and put the diamond fields understate protection through its repressive state apparatus. Thousands of Zimbabweans were killed by state agents in Chiyadzwa trying to get access to the diamond. The repressive state apparatus operates on the command of the commander in chief who was Mugabe by then meaning to say Mugabe authorized everything that the police and soldiers did in Marange. 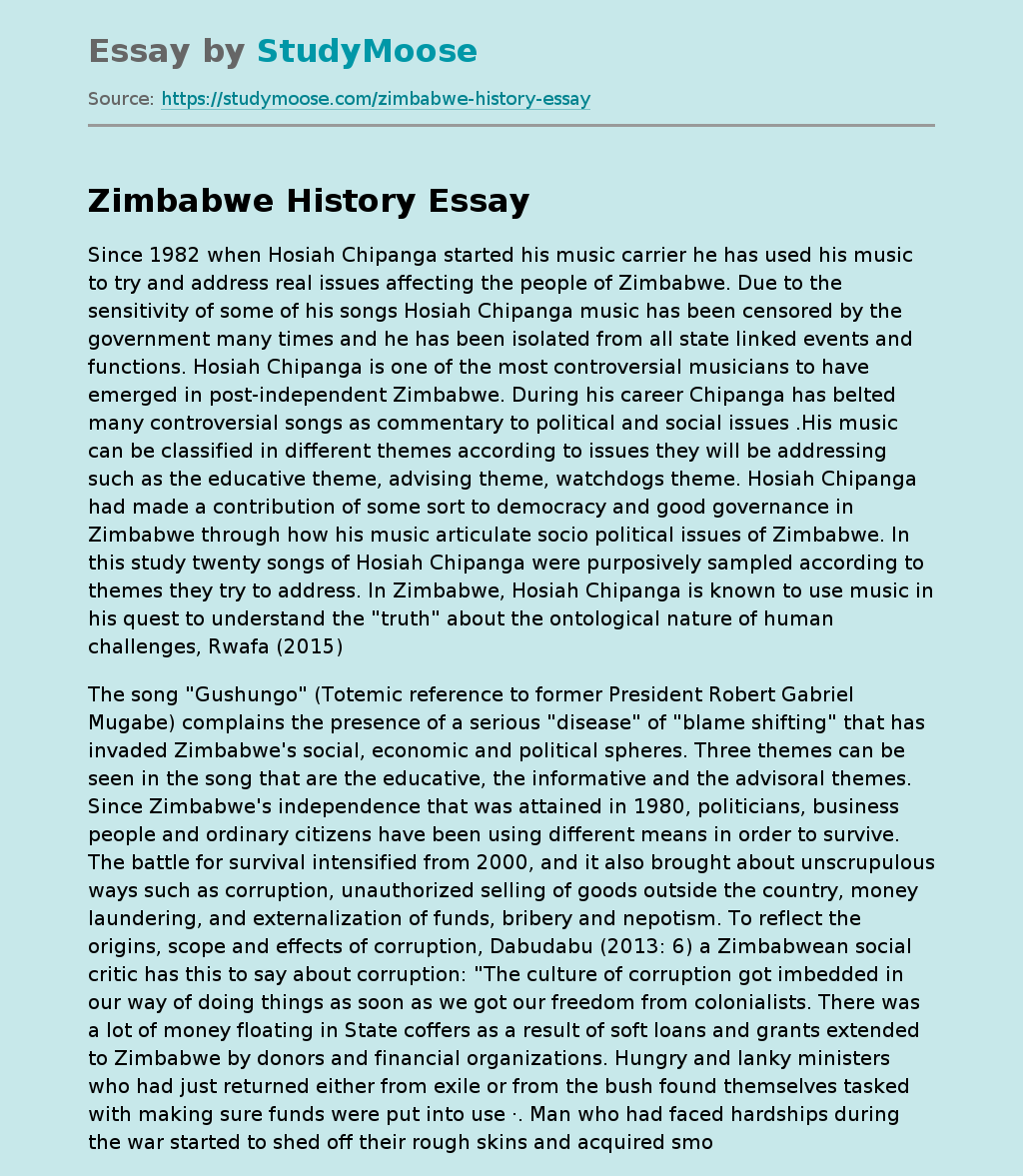